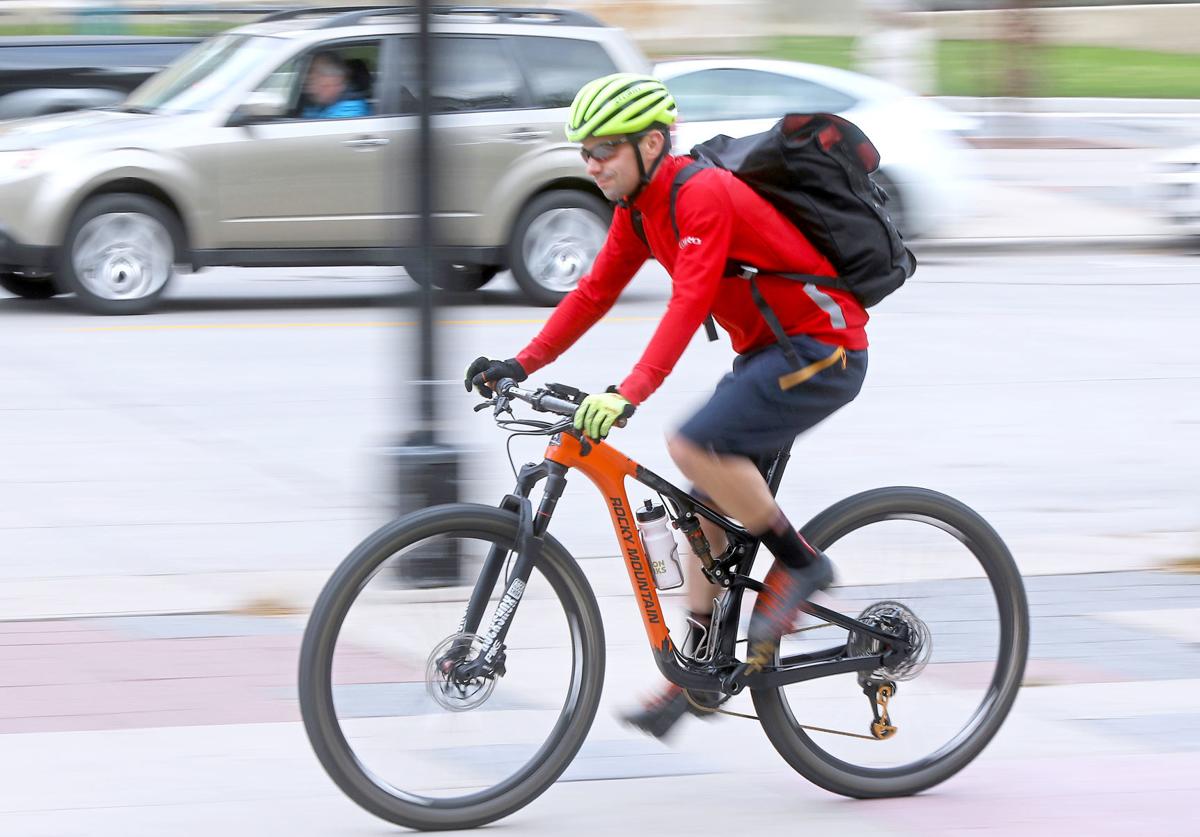 Corey Stelljes heads out on a ride after finishing work. Stelljes, an engineer in the Madison Parks Division, bikes to his office in the city's Municipal Building in order to squeeze in training for races, where he often competes against professional athletes. 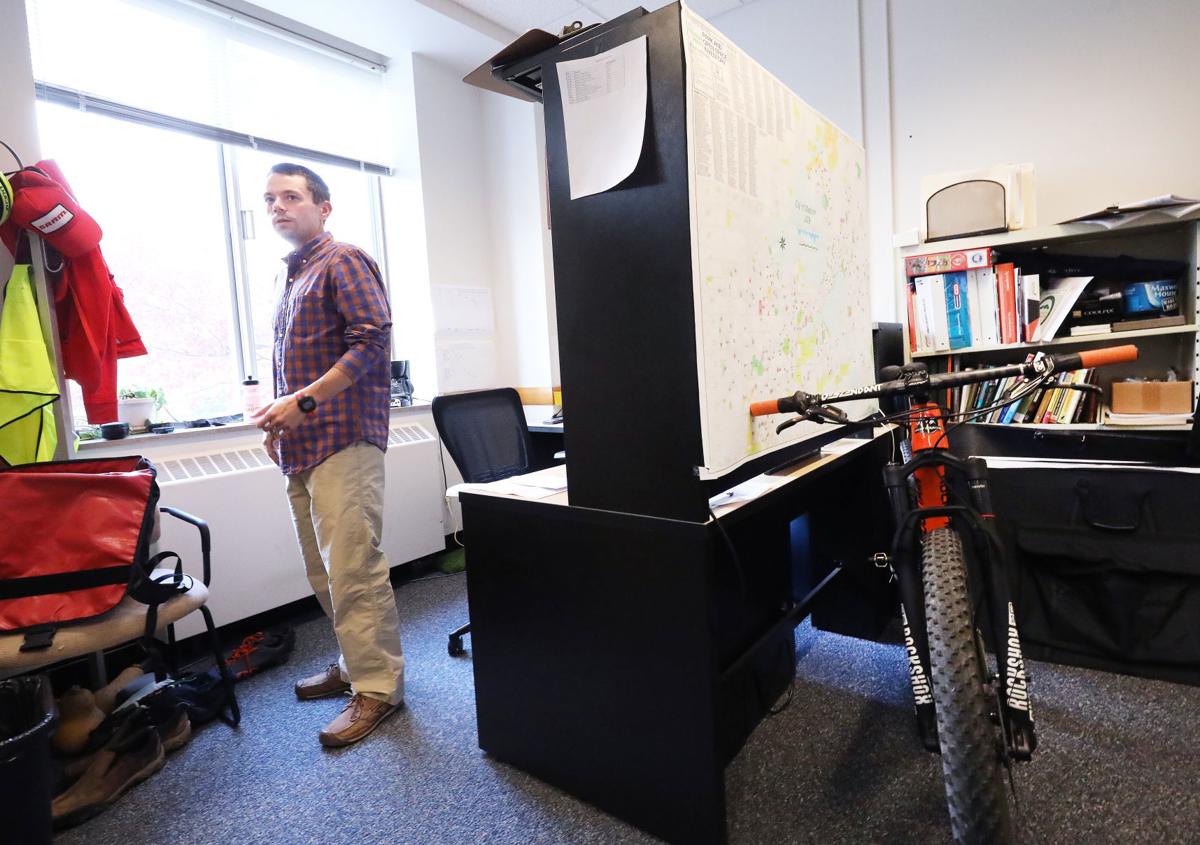 Corey Stelljes prepares to head out on a training ride after a day of work in the Madison Parks Division, where he is an engineer. Among other projects, Stelljes is completing a grant-funded plan for a citywide mountain bike trail network. 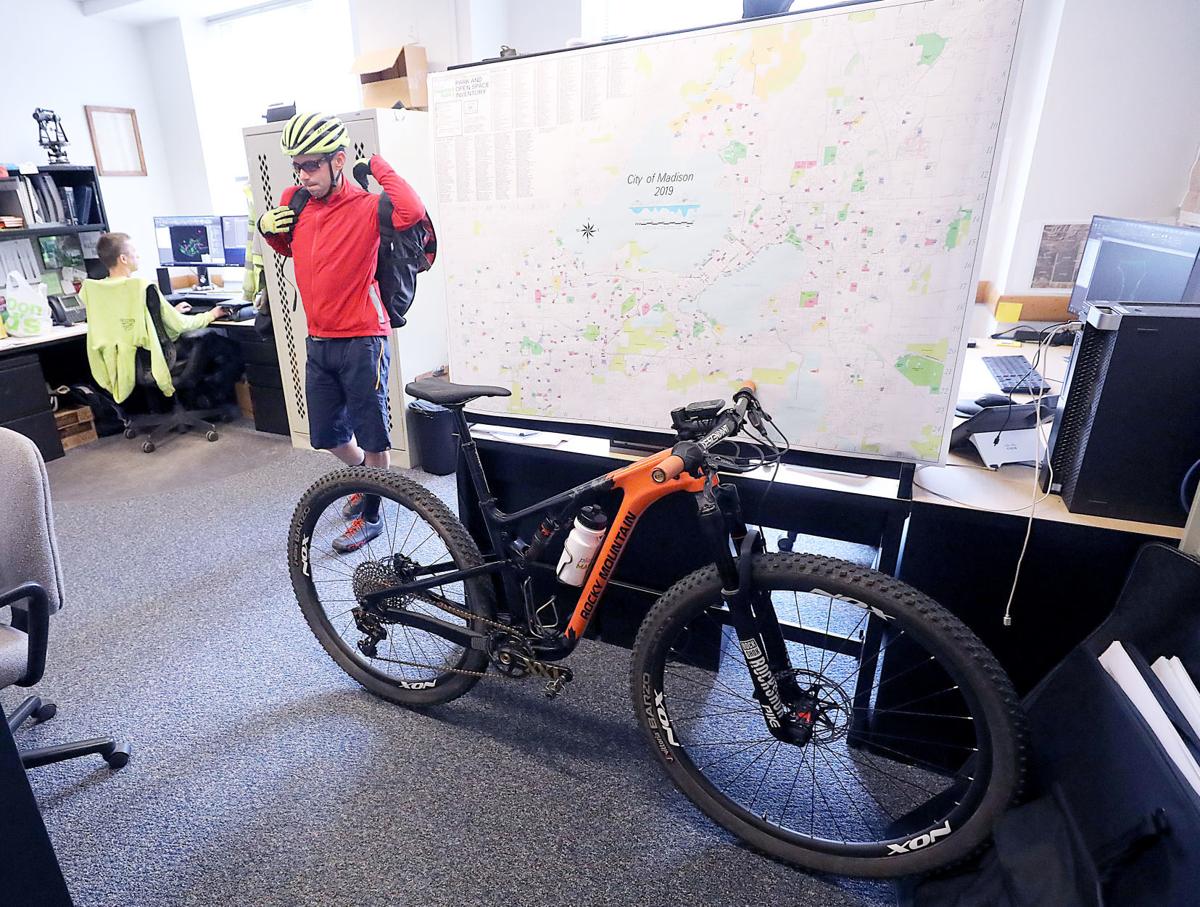 "It’s very rare that I don’t look forward to getting out and doing my ride," says Corey Stelljes, a Madison Parks engineer who competes against some of the best cyclists.

The list of top finishers at this year’s Leadville 100, a grueling race across the Rocky Mountains, reads like a who’s who of cycling, full of current and former pros, world and national champions, veterans of the Tour de France.

Among them is Corey Stelljes, a 38-year-old civil engineer from Madison.

Stelljes, who took up biking in 2008 after an injury forced him to give up running, has ascended the ranks of elite cycling, winning prestigious races and competing against some of the sport’s best riders. His palmares include the Chequamegon 40, an off-road race in the Chequamegon-Nicolet National Forest, and last year’s Fat Tire Birkie, a fast-growing race on the snow-packed American Birkebeiner ski course.

But unlike some competitors who get paid to ride bikes, Stelljes spends his days in the Madison Municipal Building, where he’s part of the team responsible for acquisition, planning and design of infrastructure in about 270 public parks.

“I have a good employer and pretty good work-life balance,” Stelljes said.

A native of Altoona, Stelljes was a four-time All-American runner for UW-Platteville, which earlier this year inducted him into its Hall of Fame. He was the 2003 Division III national champion in the 10,000 meter run and qualified for the U.S. Olympic marathon trials by finishing the Chicago Marathon in 2:20.

By that time, Stelljes said, his Achilles tendon was “starting to unravel,” and it was difficult to even start the 2007 Olympic trials, which he still lists among his proudest athletic achievements. He finished 65th out of 130 runners, 15 minutes behind winner Ryan Hall.

“I was in no danger of making the Olympic team,” he said.

When did you start competing?

I tried a number of sports in grade school, but I wasn’t really good at any of them. I was kind of a late bloomer.

It took me till maybe like my junior year in high school before I was really good at any sports, and then by that time I think I was only running. It just kind of took off from there. I think it resonated with me because I liked being outside. I like running in the woods on dirt trails. That was my passion for a number years.

But you weren’t into cycling?

I always biked to work, to class, things like that, but never really got serious about it until 2009.

I was recovering from a running injury. That was kind of the story of my running career: Get really fit, get injured, come back from injury, have a few good races. Repeat.

Eventually I had a pretty major injury ... and the only physical activity I could do was ride a bike. So I biked pretty seriously for a year, and I had some friends who were involved in the bike racing community, and they kind of persuaded me to (enter a race).

I won, so then I just decided, well, I’m gonna keep racing mountain bikes as long as I can keep doing well.

Was it hard to adapt to a new sport?

I still feel like every year I’m getting better and learning more stuff, especially on the bike-handling side of things. It’s so much easier to learn a skill when you’re young than as an adult.

It’s a bad combination when you’re really fit and you have no bike handling skills because you can come into every corner really fast. I spent some time eating dirt. I’ve got a lot of skinned elbows and knees. But no serious injuries, luckily.

What inspired you to become an engineer, and how did you end up in the Parks Division?

I was good at math. I always kind of liked building stuff as a kid … My goal was always to find a career that allowed me to be outdoors and use my math background.

I just felt like the mission more closely aligned with my personal interests and values. Anytime you can align your personal interests with your professional duties, you’re going to have a lot more success in your career and just enjoyment coming to work every day.

And now, with the help of the International Mountain Biking Association, you’re working on a plan for mountain bike trails in the city. What might that look like?

We’ve been hearing from residents, cyclists throughout the community for a number of years about the desire for cyclocross, mountain bike trails, etc. And there’s obviously a strong cycling history in town. There’s a lot of cycling industry in town.

All the ingredients are here to have a really incredible facility of off-road trails. What we really need is the plan or the recipe to put all those ingredients together. And so this grant, I think, is going to help us develop that recipe.

Once you start looking around town you start seeing parcels that you never noticed before. You really only need like a 3-foot-wide piece of dirt to make an amenity that a lot of people are going to enjoy.

How do you fit in training with a full-time job?

Time management is huge. Spending time in a car is something I almost never do. I’ll go weeks without driving, because I always am trying to integrate my commuting to work, running errands, with my training.

I try to get in maybe two hours three days per week. I’ll leave on a training ride from my office Downtown. ... I’ll choose a route that’s maybe a two-hour route then I end it at home. On the weekends, I have a few friends I like to ride with and might do anywhere from three to five hours each day.

Did you ever think about being a professional athlete?

Running-wise I was never really healthy enough for long enough to get quite to that level. And then by the time I was good at cycling, I was already in my mid-30s. At that point it’s not a realistic goal.

I considered trying to pursue that lifestyle briefly, but just looking at what it meant, I guess I just didn’t want that. You’re living on poverty wages, 250 days a year on the road. And you may not have a job in three months, or they may not pay your salary at the end of the year.

I felt like it was a bigger recipe for success doing my own program, arranging my own life because I really value stability and routine.

I have other hobbies, believe it or not, and other things I enjoy in life. Sometimes it’s just being home on a weekend working in the yard and spending time with my wife, doing house projects or going camping and paddling, fishing, hunting.

I have to pick and choose my battles. So it’s a challenge every year to balance the time and stress and enjoyment.

What motivates you to keep competing at such a high level?

I love the training. It’s almost never the case that I don’t want to get out the door, no matter the weather. … It’s very rare that I don’t look forward to getting out and doing my ride that day.

I like the mental challenge. It requires discipline. You have to make quick decisions that are based on how you’re feeling physically, internally, but then also you have to try to read your competitors. So it’s a little bit of a puzzle to figure out.

I’m a competitive guy ... I like pushing limits. Why that is I’m not really sure. There’s a sense of achievement … I think it’s something most people strive for in one way or another, and I guess that’s just kind of one way that I get mine.

Know Your Madisonian: Parking officer says her job is about more than giving you tickets

Although her job is probably one of the most loathed by Madison residents, parking enforcement officer Rebecca Mugford says she loves her job because she gets to help people.

Corey Stelljes heads out on a ride after finishing work. Stelljes, an engineer in the Madison Parks Division, bikes to his office in the city's Municipal Building in order to squeeze in training for races, where he often competes against professional athletes.

Corey Stelljes prepares to head out on a training ride after a day of work in the Madison Parks Division, where he is an engineer. Among other projects, Stelljes is completing a grant-funded plan for a citywide mountain bike trail network.

"It’s very rare that I don’t look forward to getting out and doing my ride," says Corey Stelljes, a Madison Parks engineer who competes against some of the best cyclists.