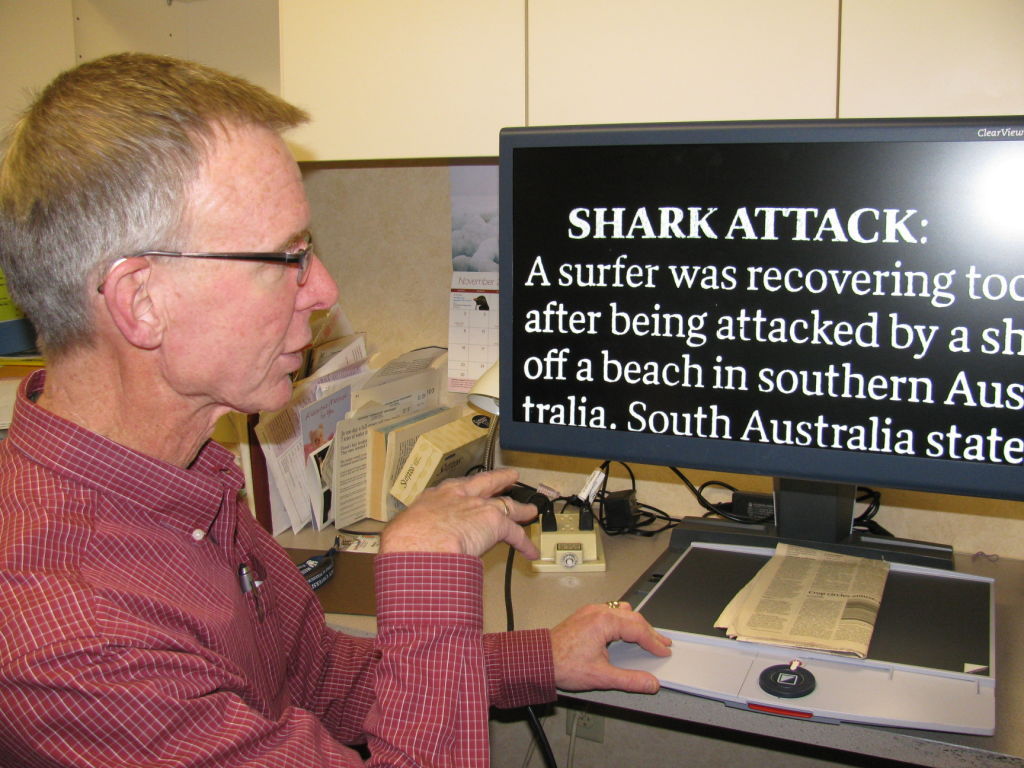 Marshall Flax demonstrates how a video magnifier can help visually impaired people read a newspaper, in his office in a lower-level room at the University Station eye clinic at 2880 University Avenue in Madison earlier this month. Flax, 61, is retiring next month after a long career helping low-vision clients from around the state learn to see better and get around more easily. 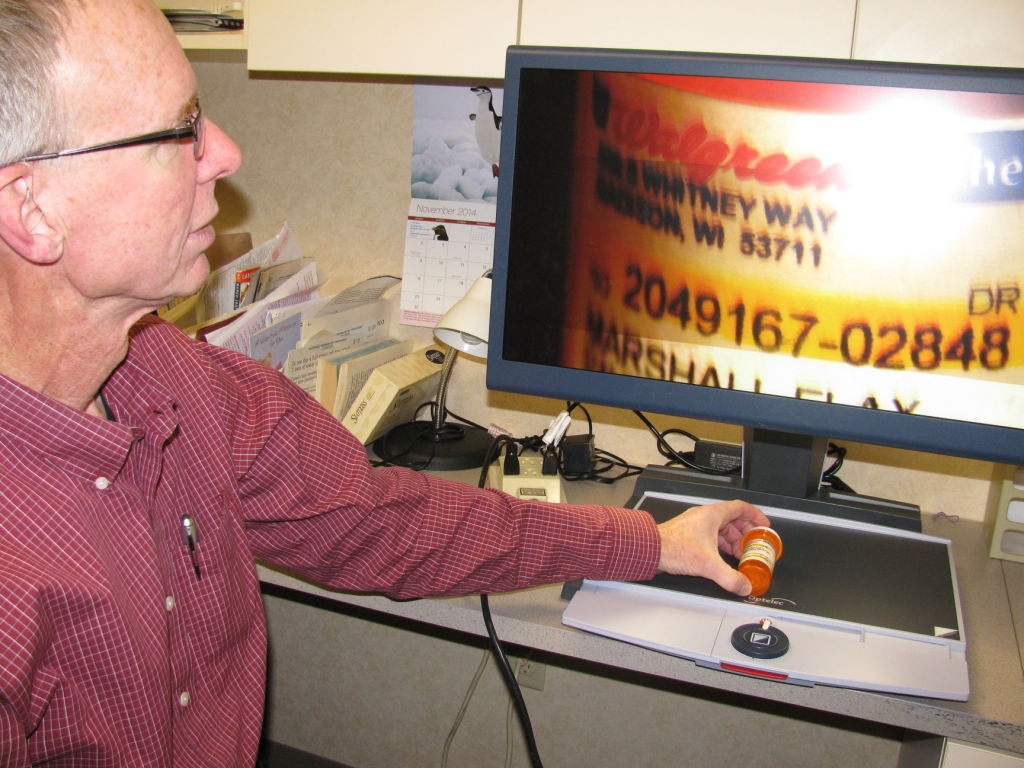 A video magnifier, available used for about $500, can help visually impaired people more easily read numbers on pill bottles when it's time to renew a prescription. Marshall Flax demonstrated the device for a reporter earlier this month in his Madison office, where he works as a low-vision therapist and mobility specialist for the Wisconsin Council of the Blind and Visually Impaired.

Officially, Marshall Flax, longtime lead therapist/specialist for the Wisconsin Council of the Blind and Visually Impaired, is retiring at the end of this year.

But he won’t really stop working with people who need his help. The habit is too ingrained.

Over the past 34 years, Flax, 61, has helped thousands of area residents with vision loss learn to see better and get around more easily, including the past 23 years with the Madison-based council.

Trained through a UW-Madison graduate program as a certified low-vision therapist and a mobility/orientation specialist, he offers clients education and practical advice in one-on-one sessions covering lifestyle changes and visual aids.

On the mobility side, he’s taught many clients to navigate neighborhood streets with a cane, walking with them outside while they learn.

After retirement, Flax, who earned his bachelor’s degree in anthropology and women’s studies in Florida, plans to see some clients on a freelance basis, he said, and work more on a mail-order business making and selling low-vision simulators that he started with his wife.

Most of your clients have diminished vision due to macular degeneration. Can that be prevented?

You can reduce your chances by not smoking tobacco and by having a low-fat diet and by getting exercise. If it’s corrupting your cardiovascular system, it’s also corrupting the arteries that lead to the retina, and that’s where your vision starts to break down.

It must be depressing and scary for people to be losing their vision. How do you deal with that?

When people come in, you might say they’re at the bottom of the barrel. They think nobody can help them. But I’m not concerned with what they can’t see. I’m only concerned with how they can use the vision that they have left. Only about 20 to 25 percent of the legally blind are totally blind. The reality is three quarters or more have some usable vision, so we can work with that.

What are the best visual aids available ?

The current high-tech tools are video magnifiers. Many of them sit on a desk top. You put a book or newspaper or whatever on a tray, and it takes an image and puts it onto a screen and makes it bigger. And there’s all the talking stuff, computer programs that read whatever you hover over. My favorite low-tech tool is the cane. It helps you detect obstacles and changes in the terrain. You can go a lot of places with it and go far distances, and it doesn’t need batteries, and it works in the rain and snow. I love teaching people how to get around with a cane.

What’s the most important thing for people to learn? Is it a specific skill set or is it more about how to approach what they’re facing?

It’s more the latter. The reality is there’s nearly always a way to get around a problem, to do it differently. It can be as trivial-seeming as getting your toothpaste on your toothbrush. How can you do that if you’re visually impaired? Well, what if you just had your own tube of paste and just squirted in your mouth?

How did your training prepare you, as a sighted person, to understand what life is like for clients?

A huge part (of graduate school) is being blindfolded. We walked all over the West Side of Madison. There was a period of time when I knew every street and sidewalk by feel.

The final exam was the drop-off lesson. My instructor drove me around — I was blindfolded — on a circuitous and intentionally confusing route and then pulled over and told me to get out. I had two hours to get to a destination she had selected. We knew we would be in the West High School neighborhood where we had practiced, but we didn’t know where and we were forbidden from asking for any help.

I made it. We were well trained.

It’s interesting you majored in women’s studies, as a male undergraduate. What drew you to that, and were you the only man in those classes?

I was not the only man. There was a small group of us guys trying to deal with our self-identities. We were not football-playing, hunting-and-fishing, competitive guys, and this was counter to the male world of Florida at that time. The only real blowback came from the far left, that our struggle was the “struggle for more snuggle.” You know: women lining up to sleep with sensitive guys. Never actually happened to me.

Feminism was emerging as a school of thought and I saw how being forced into a role that didn’t fit could be damaging.... I’ve always thought anthropology provided me with a great framework for working with people who, by no choice of their own, did not fit the cultural ideals.

What made you choose your graduate program?

I knew I wanted to be in a helping, coaching kind of situation, one-on-one with people. ... I just didn’t think I could handle being in a classroom all day.Then I found this program. It’s really exciting. You can change lives. It’s a real privilege for me to be able to be a part of that.

Kelly Ehlers started a business six years ago that helps other companies use social media to build their brands.

Users can "see" objects by interpreting signals sent to an electrode-covered mouthpiece by a video camera mounted on dark glasses.

Know Your Madisonian: Madison police detective finds her 'fountain of youth' in yoga

"Yoga helped me improve my health, which in turn made me more active," says Madison police Detective Samantha Kellogg.

Marshall Flax demonstrates how a video magnifier can help visually impaired people read a newspaper, in his office in a lower-level room at the University Station eye clinic at 2880 University Avenue in Madison earlier this month. Flax, 61, is retiring next month after a long career helping low-vision clients from around the state learn to see better and get around more easily.

A video magnifier, available used for about $500, can help visually impaired people more easily read numbers on pill bottles when it's time to renew a prescription. Marshall Flax demonstrated the device for a reporter earlier this month in his Madison office, where he works as a low-vision therapist and mobility specialist for the Wisconsin Council of the Blind and Visually Impaired. 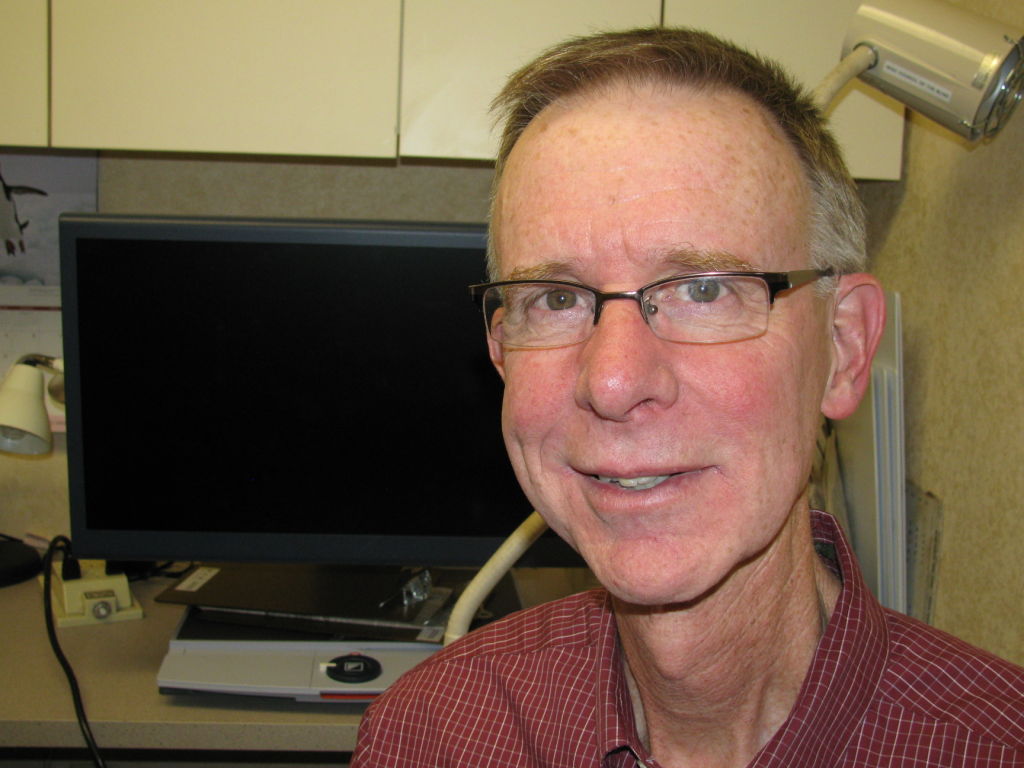 Marshall Flax is a certified low-vision therapist and mobility and orientation specialist with the non-profit Wisconsin Council of the Blind and Visually Impaired in Madison. Flax plans to continue seeing clients part-time and spend more time on his business making and selling low-vision simulators after his retirement next month.