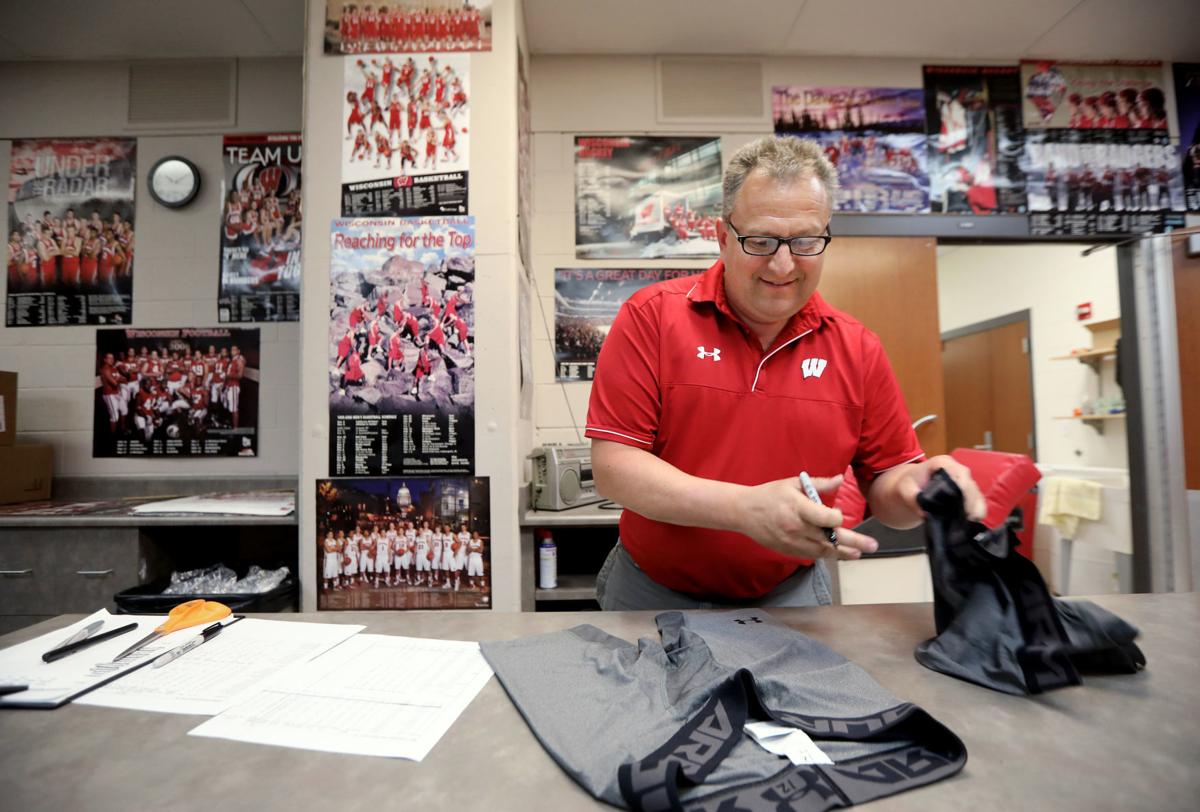 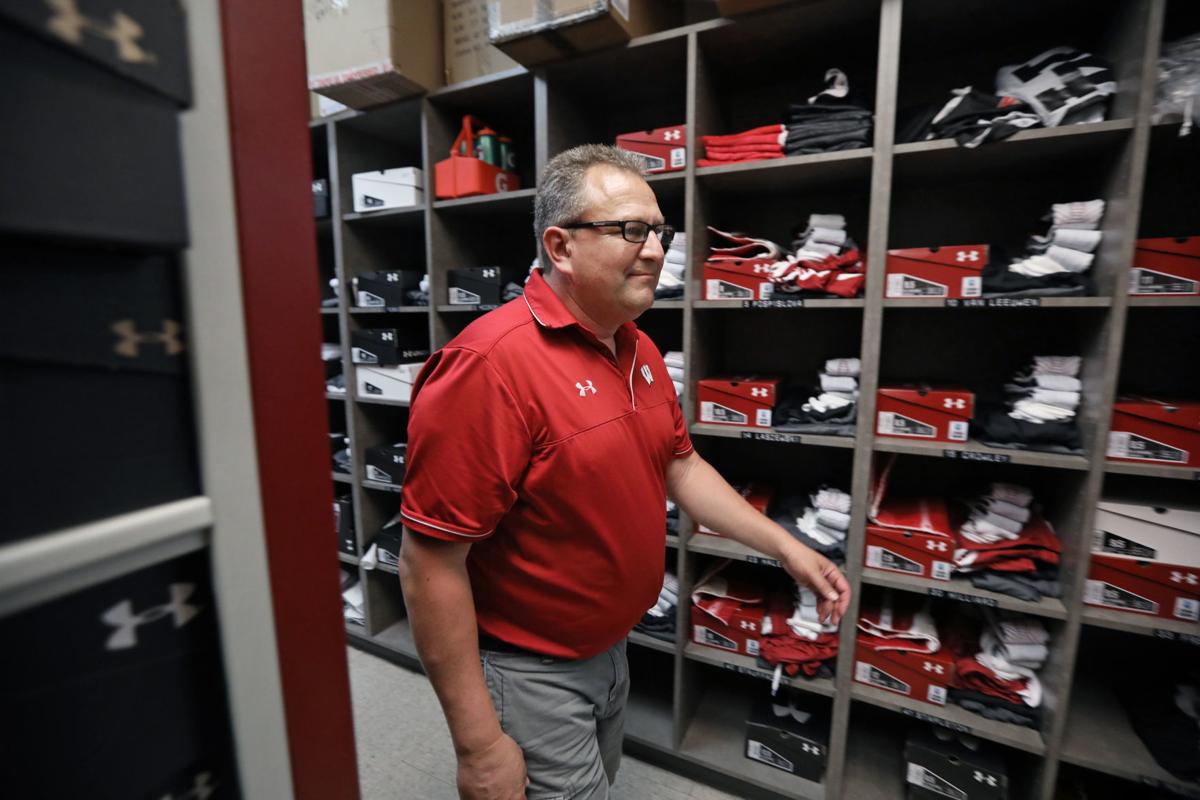 Equipment manager Gary Poels places summer workout gear for members of the UW men's and women's basketball teams in their individual cubbies in the equipment room at the Kohl Center.

Gary Poels was 12 when his neighbor asked if he’d like to help him out at work.

It was a no-brainer for Poels: Bob Noel, the neighbor, was the equipment manager for the Green Bay Packers.

Poels worked every game day at Lambeau Field for the next 20 years. He spent the final eight seasons of that stretch as an assistant equipment manager for the Packers. His other “job” was helping out with chores at 5 a.m. and 5 p.m. on the dairy farm his family bought when he was 16.

In December 1996, Poels was hired by UW-Madison as an assistant equipment manager. He has an office at the Kohl Center and is in charge of making sure four teams — men’s and women’s basketball, and men’s and women’s swimming — have all the gear and equipment they need for games and practices.

When Brevin Pritzl got blood on his uniform during a UW-Michigan State game in 2018, he was told by officials that he wouldn’t be allowed on the court unless he changed his soiled No. 1 jersey. No problem: Poels had an extra jersey — No. 51 — waiting behind the team bench.

Most work days for Poels, who turned 55 this month, begin with doing some laundry. The equipment room at the Kohl Center has four 55-pound capacity washers and five 90-pound capacity dryers.

What’s the process when a new player joins the program?

We’ll find out what number they want and find out what shoe size they are, so I can start getting some stuff for them. It’s usually either XL or double XL for jerseys. Some guys like bigger, some guys like tighter. I like to meet them and measure them. I’ll measure their feet. A lot of guys will tell me their shoe size, but I like to measure them myself because some guys aren’t wearing the correct-sized shoe. Some guys say they’re a 17 and they measure a 15.

Are players pretty picky about the shoes in general?

It’s tough, because (Under Armour will) come out with a couple different shoes throughout the course of a season. Usually in the fall, they’ll have a couple new shoes. Then in January, they’ll come out with a new shoe. Then postseason, March, they’ll come out with a new shoe. So those are like four different shoes. They don’t give you samples ahead of time, so you don’t know which guys are going to like which shoes. Some guys like the lows. They try to make the shoes in a mid and a low. Lows have become more popular the last five or six years. More often than not, they want lows. So now I order more lows than mids. But somebody will sprain an ankle (and athletic trainer Henry Perez-Guerra) will want everybody in mids.

What’s the most challenging part of your job?

I think it’s probably sizing — ordering the right sizes. A lot of times, from year to year, Under Armour might change the sizes on their shirts and warmups and trying to get it right is hard, especially when you’re ordering so far in advance and you don’t know who’s on a roster and you can’t change your orders once they’re submitted. The ordering is all timely. In October, we order for the next season. All their travel warm-ups, everything has to be ordered in October. Uniforms are different; they’re ordered in January. Basketball shoes are around the same time, February for next year, which is tough because you have to order all this stuff in advance.

You travel with the team during the postseason. What’s that like when you’re at an unfamiliar place for up to five days?

When you travel for the NCAA tournament, it’s always challenging. Every location is different. You’ve got to figure out where you’re going to get your stuff washed, because it’s not always as simple as you’d think. When we were in San Jose (for the 2019 NCAA tournament), the laundry at the arena belongs to the San Jose Sharks and they didn’t want anything to do with us. So there was a laundry in our hotel and we were washing practice gear at the hotel. We had access to another college there and they said it was going to be $60 a load. If we would have won (in the first round), I would have probably had their game uniforms washed there, but the practice gear we washed at the hotel.

Know Your Madisonian: State Street spray paint artist gets 'goosebumps' from spectators' reactions to his work

Travis Knapp, the "Spray Paint Guy," was almost kicked off of State Street in 2012, but city residents came to his defense.

The Madison native joined Summit Credit Union in 1995 and was promoted to CEO in 2002.

Equipment manager Gary Poels places summer workout gear for members of the UW men's and women's basketball teams in their individual cubbies in the equipment room at the Kohl Center.