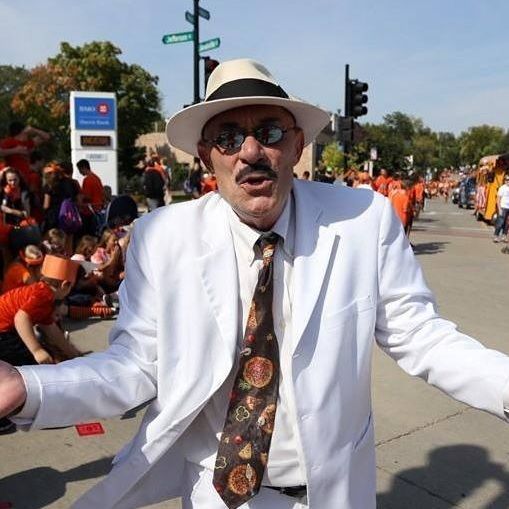 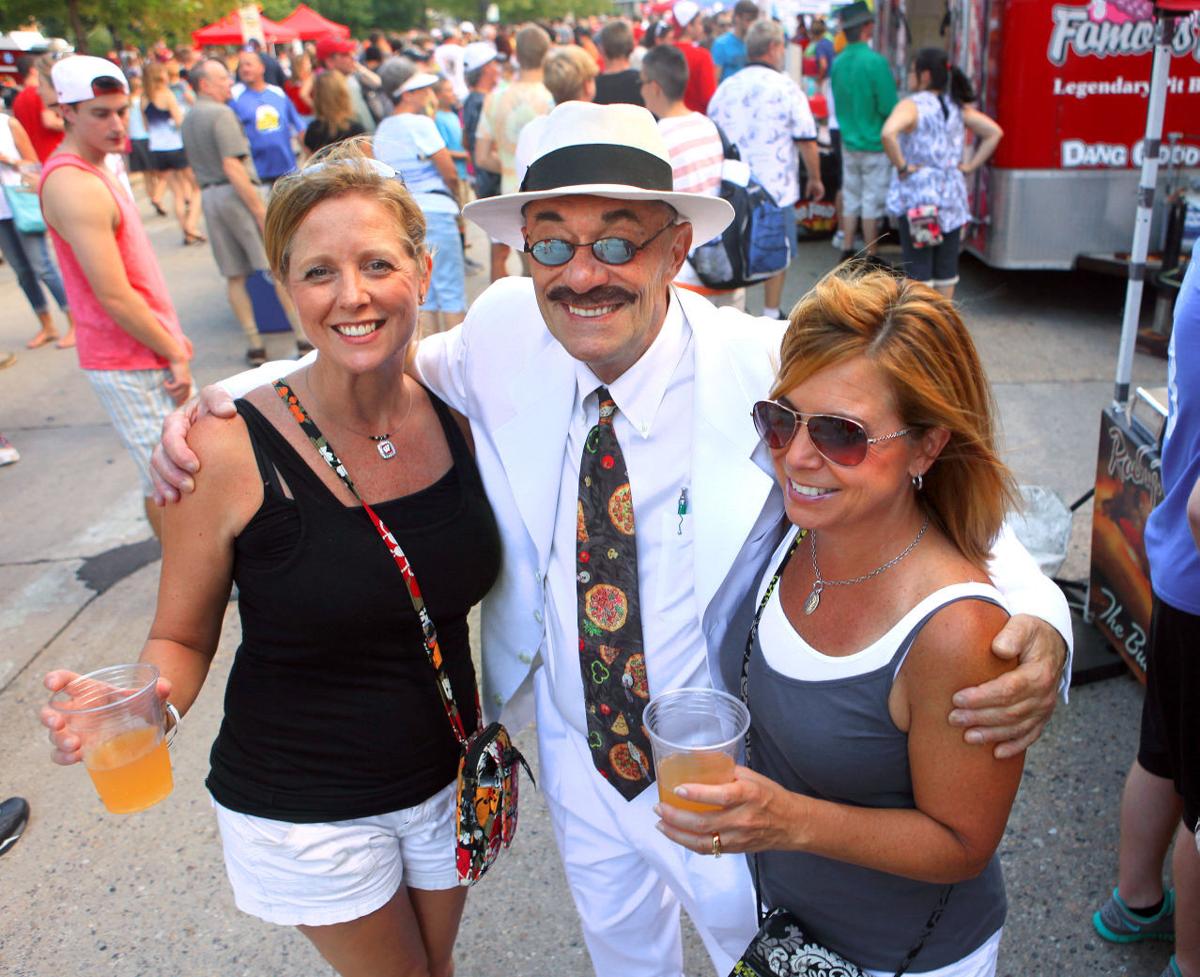 Pederson as Rocky Rococo hams it up with Christie Voigt, left, and Darcey Amundson at the 2014 Taste of Madison.

The co-owners of Rocky Rococo Pizza aren’t sure what they are going to do for their annual Valentine’s Day celebration without the face of their business who combined a white jacket, round-rimmed sunglasses and a fedora with his Italian accent and great wit to become a Madison icon.

Jim Pederson, who sang the blues, rapped out poems and told silly stories as the Rocky Rococo character for TV and radio ads and did countless public appearances and charity work for the company for 40 years, died suddenly Thursday in Madison. He was 68.

“It’s a big deal,” said co-owner Roger Brown. “He was the public face of our business, he was the persona of it. A lot of people thought he was the founder, made pizzas and was the heart and soul of the business. He had a big impact on the business.”

Pederson was at his best on Valentine’s Day, which is one of the pizza franchise’s busiest days thanks to the advertisements in which “Rocky” would argue that his heart-shaped, deep-dish pizza was a more romantic gift choice than candy and flowers.

“On Valentine’s Day, he’d go to all (11) of our stores in La Crosse and Madison and entertain everybody at each place by handing out breadsticks and singing out a kind of rap poem that he’d change all the time,” Brown said. “He’d get great applause at every place he visited. People would count on him coming every year.”

“He’d always go to the back of the store and thank the crews for working so hard on Valentine’s Day, too. Our customers and crews loved him. He’ll really be missed.”

In a 2008 interview with the Wisconsin State Journal, Pederson said he grew up on Chicago’s South Side and was in a gang called The Apostles of Death before his mother sent him to a preparatory seminary.

“My grades went from F’s to A’s right away because at that time, corporal punishment was in,” he said. “You didn’t see a girl for four years and you had a suit and tie on every day. I was going to become a priest but then I got the scholarship for drama and fine arts.”

Professionally, Pederson was more than a pizza pitchman. He was a comedian with Chicago’s Second City and worked with John Belushi and Bill Murray for two years on stage before he moved to Madison. He operated a marketing and consulting business and recorded songs and raps and hosted “Master Pizza Theater,” which used to air on WMSN-TV/Ch. 47.

Pederson also opened a small private practice as a psychotherapist. He said he worked with family and relationships dealing with addiction and wrote a column for Addiction Professional magazine called The Family Factor.

He also said he shaved off his mustache because he didn’t like to be recognized as Rocky Rococo and would tell people he was Rocky’s brother, Reginald.

“I really separate out the psychotherapist practice from the Rocky character,” he said in the interview. “When I’m in the white suit, it’s very safe. I can spout raps or poetry. Then Jim Pederson is the more introspective person. The writer, the musician, the psychotherapist.”

Pederson met Brown and Wayne Mosley about 18 months after they opened their first Rocky Rococo store on Gilman Street in 1974 and made a splash by selling pizza by the slice. Rocky’s name was based on a character from Los Angeles comedy troupe Firesign Theater, and they purchased for their logo a sketch by Madison artist Dave Muldowney of a character based from a Mad Magazine story. “And then Jim made that character come alive,” Mosley said.

Mosley laughed at all the years they’d use putty to make Pederson’s nose bigger for the TV ads.

“On a hot day it would start misshaping and interesting things would happen to his nose,” he said. “Then we decided the persona was plenty so we said, ‘Away with the nose.’ ”

Pederson wrote many of the ads, and Mosley’s favorite was when Rocky said, “Nine out of 10 pizza experts say Rocky’s is the best — and the 10th one ain’t saying anything no more.”

As the business grew during the 1980s and before they sold all but the 11 franchises they currently own, Mosley said some partners and ad agencies were scared of its advertising campaign with Pederson.

“We were planning to open a restaurant in St. Louis and one agency asked an anti-defamation group to be a part of focus group where they asked, ‘Will you be insulted by him?’ ” Mosely said.

Both Mosley and Brown said they were touched by the outpouring on Facebook from people who heard that he had died and wrote what meeting Rocky meant to them.

“The spirit of Rocky will live on and we hope it will be fun and a tad irreverent,” Mosley said.

The Williams family appearance will likely be during the noon or 1:30 p.m. showing on Fox 47.

Pederson as Rocky Rococo hams it up with Christie Voigt, left, and Darcey Amundson at the 2014 Taste of Madison. 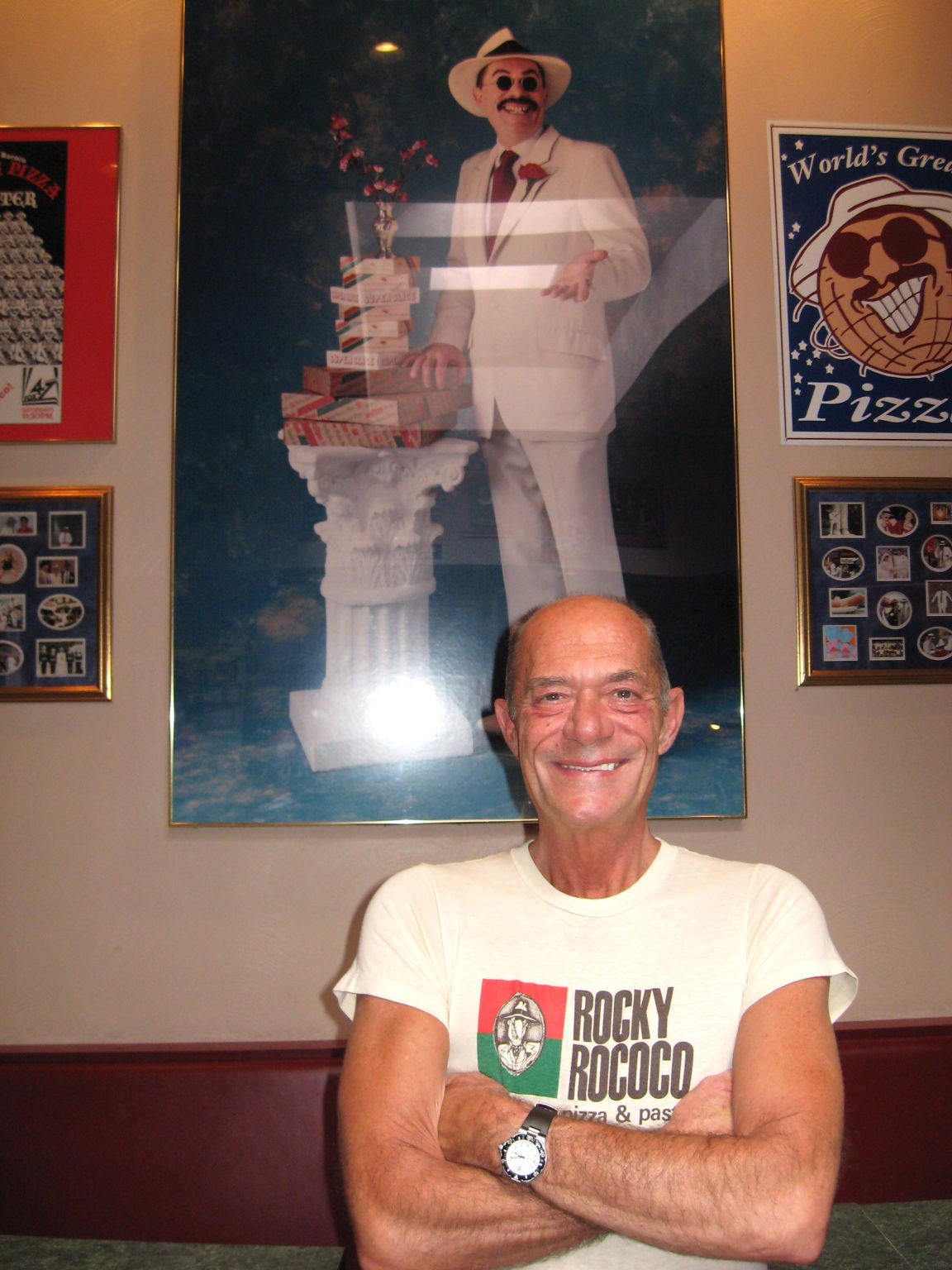