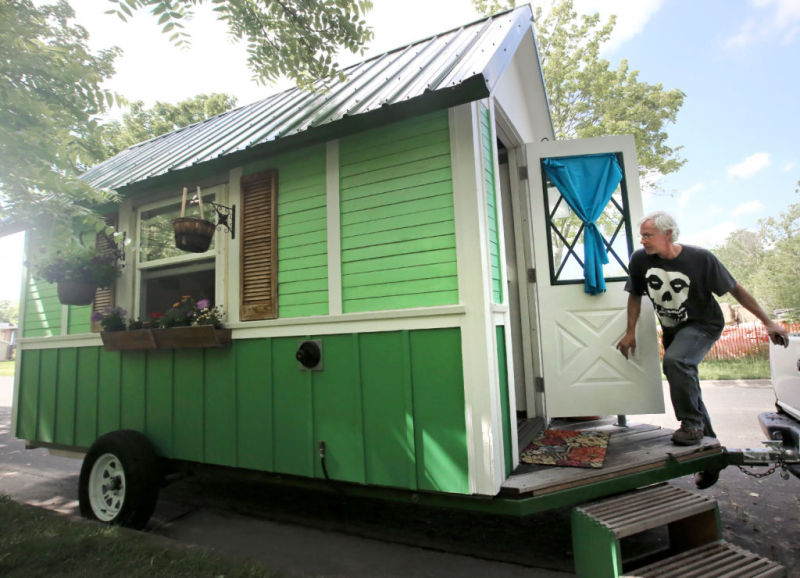 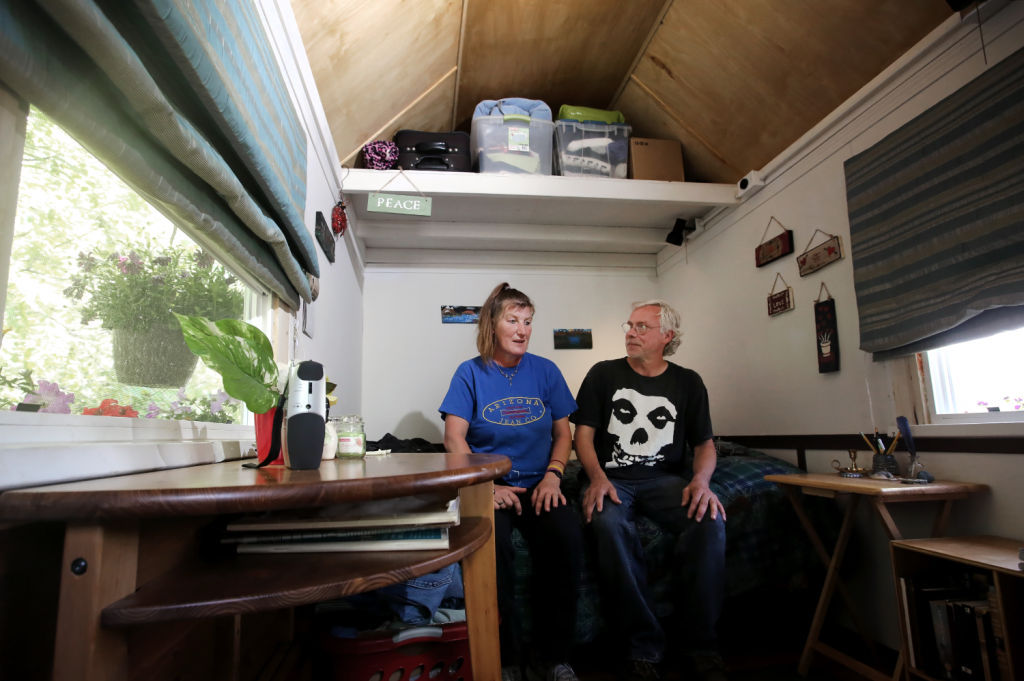 Betty Ybarra and Christopher Derek converse inside their tiny house, which they've lived in for six months. The 98-square-foot structure is on wheels and parked on a city street, but the couple soon will be able to leave it permanently at a tiny village. 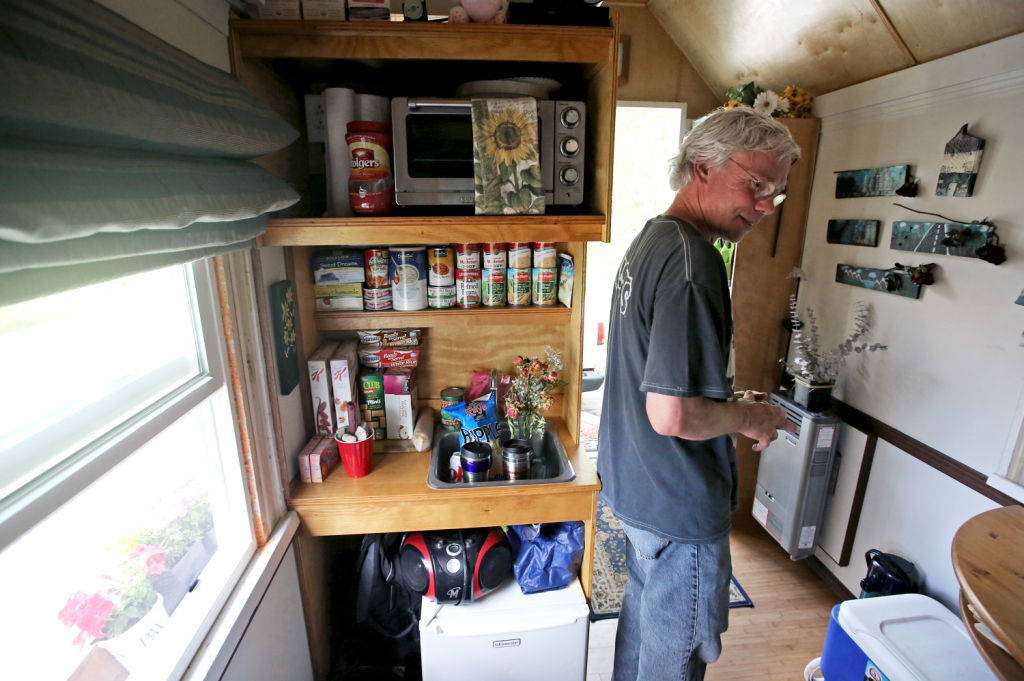 Christopher Derek is pictured inside the tiny house he shares with Betty Ybarra. "We actually get along really well, though we're always looking for ways to organize our stuff and to simplify," he said. "For us, it has a coziness. We love it."

Over the Christmas holiday last year, Christopher Derek and Betty Ybarra moved into Madison’s first – and so far only – tiny house.

They are modern-day pioneers, exploring a frontier where one’s dwelling is just 98 square feet and parked on the street. Think of living in a food cart or a very small dorm room.

The formerly homeless couple now has logged six months in the mobile structure, which must be moved at least one block every 48 hours to comply with city parking rules.

Some may still call them homeless. They disagree.

“We built this with our hands, our hearts and our friends, right Betty?” Derek said, as the two sat next to each other on their bed last week. “It gives me more of a sense of home than a 24-room house.”

The couple find themselves in a surprising spot. They have gone from having no roof over their heads to living in a structure that has become an international curiosity.

They’ve been interviewed by Al Jazeera America and a Russian television station. The New York Times took notice, and the architectural critic for the Milwaukee Journal Sentinel has dropped by for a visit.

Hundreds of people have toured their house at neighborhood gatherings, fundraisers and governmental meetings. Early on, they removed personal items before the tours. Now they don’t bother.

“It’s pretty much all on display,” said Ybarra, gesturing toward the canned goods in the pantry, the Mother’s Day card on her nightstand, the medicine cabinet that at least one guest felt the need to open.

The couple’s tiny house grew out of Occupy Madison, part of the 2011 international protest movement against social and economic inequality. Locally, the movement morphed into a homeless encampment, which now has become Occupy Madison Inc., a nonprofit organization addressing homelessness and poverty.

Occupy Madison has been building tiny houses at a rented workshop off Stoughton Road on the city’s Far East Side — the second and third will be completed within days. Soon the group will have a permanent site.

It has purchased the former Sanchez Motors site, 2046-50 E. Johnson St., for $110,000 and took ownership May 29. The city has granted Occupy Madison permission to turn the site into a village with up to nine tiny houses, as well as a workshop and retail store.

General cleanup of the site has begun, but it likely will be at least a couple of months before the first tiny house is on the lot, said Brenda Konkel, an Occupy Madison board member.

The city is requiring that at least three of the four bathrooms planned for the site be completed before the first three houses can be moved in, she said. A construction firm will begin the work soon.

Volunteers are planning for flowerbeds, trellises, attractive fencing and gardens.

“We could do the minimum to get by, but we want to make it beautiful so people see it and love it,” Konkel said. “There are a ton of people in the neighborhood who donated money and have volunteered time, but clearly we haven’t won over everybody.”

Derek and Ybarra will be among the village’s first residents. They plan to join the Emerson East Neighborhood Association.

Ybarra said a messy relationship left her homeless. Derek, 55, said he is homeless by choice.

Around 2011, he quit his Green Bay factory job, gave most of his possessions to charity, and “started walking south.” It was a spiritual and philosophical decision, he said.

He doesn’t like the word “homeless” and never considered himself such even when he had no address. “I kind of feel like the whole world is my home,” he said.

The two met a couple of years ago on the Capitol Square and have been together 18 months. Initially, Ybarra said she was “confused and frustrated” by Derek’s decision to be homeless by choice.

“Don’t you want stability?” she asked him.

“I find stability in my mind, not in material possessions,” he told her.

They both do occasional odd jobs for money but otherwise devote their time to Occupy Madison. People who live in the tiny houses must agree to invest at least 500-600 hours of sweat equity. Derek and Ybarra have far surpassed that.

They are called “stewards” of the $4,500 house. Occupy Madison retains ownership.

Despite his vagabond inclination, Derek said it’s nice to have the basics — four walls, a roof, a floor — to shield oneself from the elements.

In addition to the bed, the house includes a nightstand, a shelf with nine books (“The Canterbury Tales,” the Bible), a half-circle table they found curb shopping, a microwave oven and a mini-refrigerator.

Solar energy powers the lights, and a propane heater keeps the unit warm in the winter. A gravity-fed tank can provide a little water to a small sink.

There’s a tiny cubicle that can be used as bathroom and closet space. The structure initially had a compost toilet, but the couple never activated it.

About the time they were planning to, the concept of a tiny village surfaced. Their future neighbors objected to the idea of toilets in the houses and got them scratched from the design.

A truck owned by Occupy Madison moves the house when needed, although Derek said they have been able to stay parked on a street in the industrial area near the current workshop, as no neighbors have objected.

The only real issue has been a lack of storage space. They’re thinking about hoisting their bed and adding storage units underneath.

“We really haven’t completed the house,” Derek said. “But I guess no one ever does.”

Betty Ybarra and Christopher Derek converse inside their tiny house, which they've lived in for six months. The 98-square-foot structure is on wheels and parked on a city street, but the couple soon will be able to leave it permanently at a tiny village.

Christopher Derek is pictured inside the tiny house he shares with Betty Ybarra. "We actually get along really well, though we're always looking for ways to organize our stuff and to simplify," he said. "For us, it has a coziness. We love it."