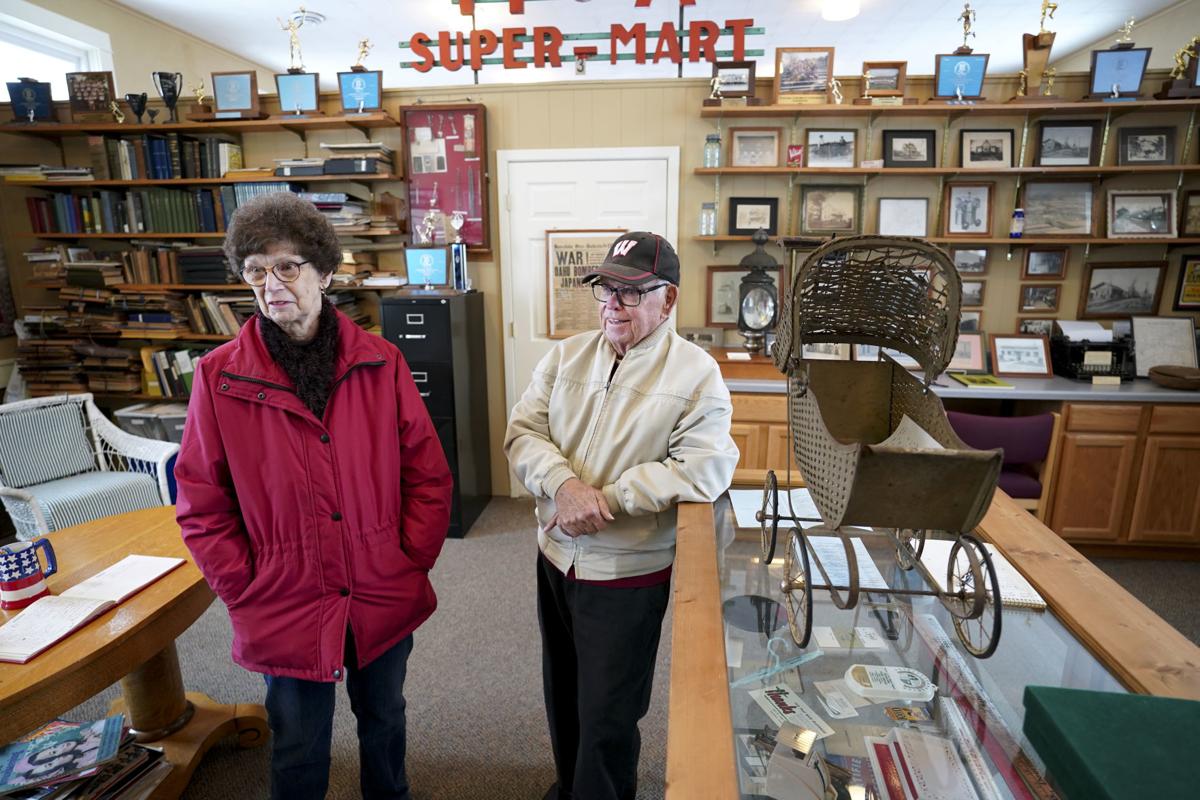 Beverly and Norman "Pogo" Dahl are two of the three active members of the Deerfield Historical Society. The organization, with a museum on the second floor of the village hall, is struggling to find new members to run the society that was founded in 1983. The society's president and treasurer both died earlier this year. 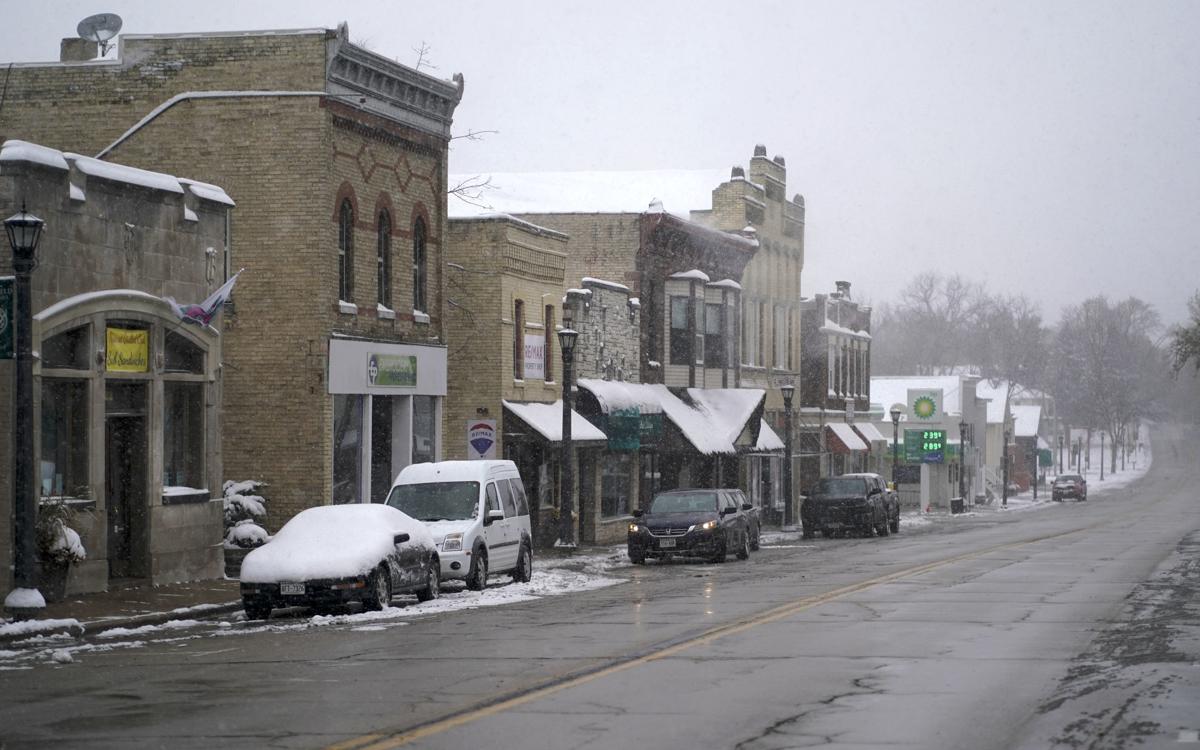 There is no grocery store in Deerfield and many of the storefronts are empty, although a new coffee shop recently opened down the street from the village hall. 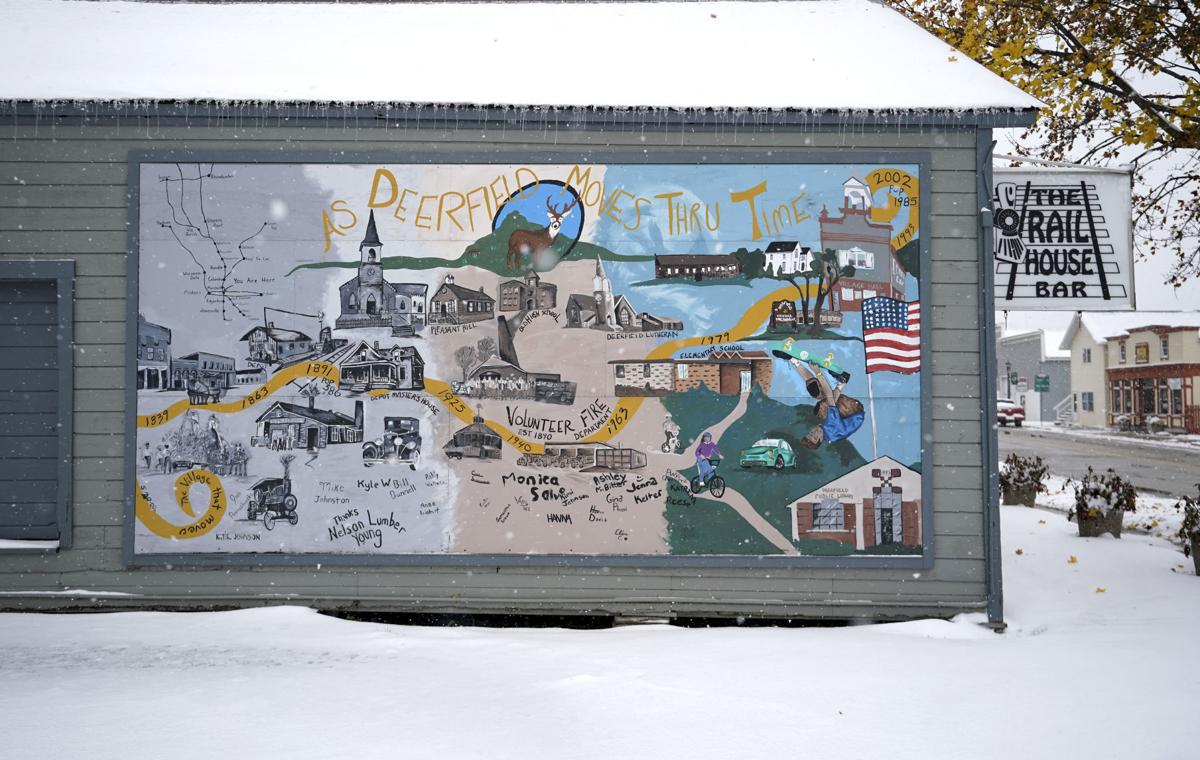 A mural on the side of a Main Street business details some of the history of Deerfield. 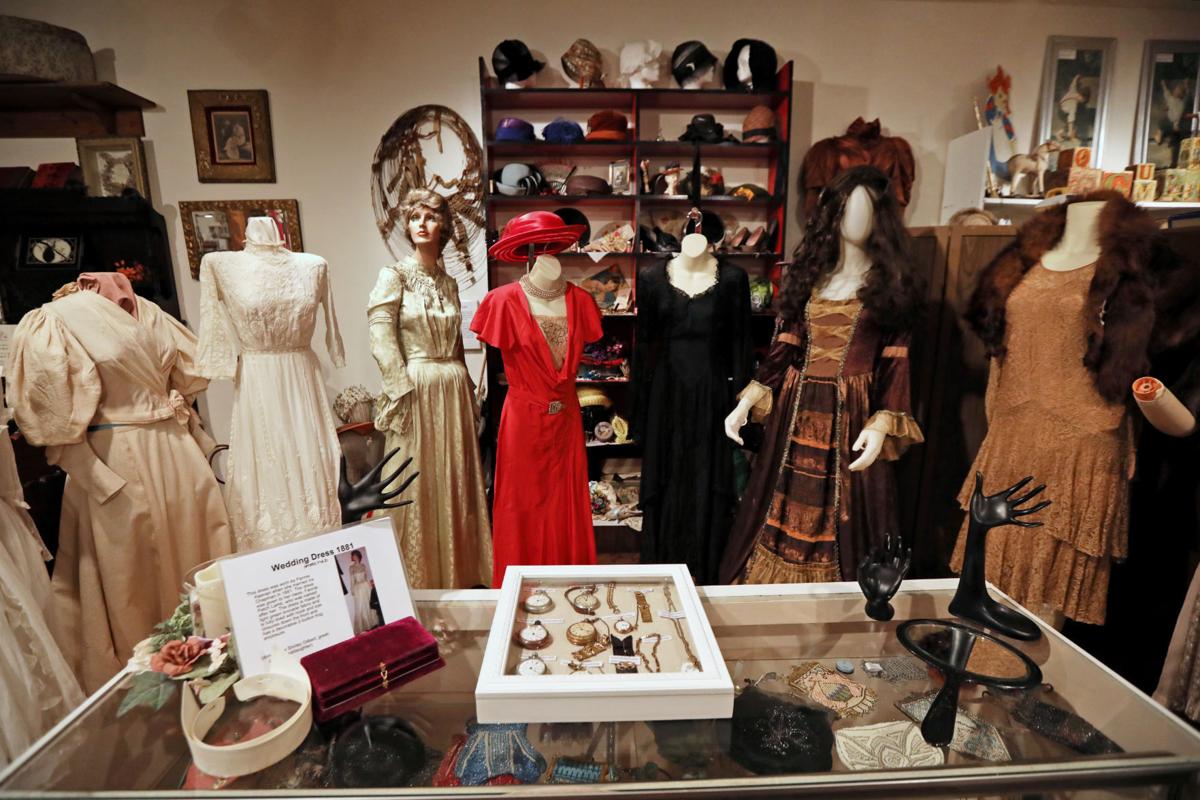 Vintage clothing is displayed at the Oregon Area Historical Society museum in Oregon.

DEERFIELD — The collection includes a typewriter from the train depot, a clock from the old post office, a wooden crate from the now-defunct Johnson Hardware and a yardstick from the former Deerfield Motor Co.

There are trophies won by athletes at Deerfield High School when it competed in the Eastern Suburban Conference, shelves of scrapbooks and a mural of “The Great Fire of 1888,” which destroyed a large swath of the downtown. A black-and-white photo of Alex Nelson, who founded Deerfield in the early 1880s, looks over the collection.

The Deerfield Historical Society’s quaint museum on the second floor of the village hall tells the story of this eastern Dane County community of about 2,400.

But the future of history here is in question.

Dorothy Loftus, who founded the historical society in 1983 and had been its only president, died in January at the age of 96. Dick Berge, the society’s treasurer, died in May at the age of 79, leaving just three active members, all of whom would like to retire. A community meeting on Oct. 14 to drum up replacements was attended by about 10 people. No one raised a hand when asked if they would be willing to serve on the volunteer board.

In addition, the village wants to build a new village hall, which could leave the museum on its own. The historical society currently uses the space rent-free and pays no utilities.

Dahl isn’t alone. Wisconsin is home to at least 414 local affiliates of the Wisconsin Historical Society, about 75% of which have no paid staff, according to WHS data. With aging members, busy schedules, work, families and other activities and organizations all vying for time and seeking members, finding volunteers to curate and steward the past can be a tall order. Even at societies where there is active and strong membership, recruiting younger people to serve is a challenging task.

At the Oregon Area Historical Society, its museum, in a former lumberyard building, is packed with memorabilia that includes class photos of graduates from Oregon High School as far back as 1892. Filing cabinets are stuffed with genealogies, there are photos of historic buildings and displays on social organizations, past businesses and the community’s involvement in wars. Ernie Tresch is featured because the late Oregon man, who in his later years was a crossing guard in the village, was General Dwight D. Eisenhower’s pilot during World War II.

Melanie Woodworth, the museum’s coordinator, said connecting the historical society through programs in schools, the senior center and churches, and by creating publications and using social media to reach community members, have all paid off in bringing new people into the fold, although most are over 60. She admits, however, that the loss of a few key people in her organization would make things difficult.

“I know it’s not everybody’s thing, this interest in history and genealogy and stuff, but it’s so important to me to think this will go on,” Woodworth said. “I think this is important to this community, but we are competing with a lot of different organizations.”

In the Dodge County community of Hustisford, located on Sinissippi Lake, an impoundment of the Rock River south of Horicon, the historical society owns a house built by John Hustis in 1851 and cares for a spinning wheel shop constructed in 1860, an 1888 shoe shop and a band shell dedicated in 1916. But with just 1,115 people in the village, finding people to donate funds to care for the properties and to volunteer their time has been challenging. The society, founded in 1971, has about six active members.

“We’re able to squeak by but it doesn’t look good. We can’t get anybody to help,” said Robert Scharnell, 78, the society’s president and a member for over 20 years. “Every newsletter we put something in but nobody responds.”

That’s not the case in communities like Mount Horeb, where the $1.8 million Driftless Historium, which opened in 2017, includes exhibit space, archives, a library room, gift shop, community room and has paid staff.

The Milton Historical Society also has paid staff and a robust board of nine directors who run the Milton House Museum, a national historic landmark and the last certified Underground Railroad station in Wisconsin that can be toured. The Rock County city is unusual because it also is home to the Milton College Preservation Society, which chronicles the history of the school that was founded in 1844 and closed in 1982. The preservation society owns Main Hall where it hosts a museum and has an eight-member board.

Janet Seymour runs the Wisconsin Historical Society’s affiliate outreach program, the oldest of its kind in the country, which advises local historical societies on issues like displays, care of collections and how to organize their nonprofit. The state historical society recently held its annual conference in Lake Geneva and just approved four new affiliations, including the National Brewery Museum in Potosi.

“One of the commonalities across the state for all nonprofits, it’s not specific to history-related organizations, is that there’s a real emphasis on recruiting, engaging and attracting new board members,” Seymour said. “It is certainly a key conversation that local history organizations are having.”

Seymour said it’s unusual for a historical society to dissolve. But in the case of Deerfield, which has only 22 dues-paying members and a museum open only by appointment, one option could be merging with the Koshkonong Prairie Historical Society in Cambridge. However, that would transfer the museum’s collection out of Deerfield, Dahl said. To avoid that, a second public meeting is set for 6:30 p.m. Monday at the Deerfield Public Library in another attempt to recruit more board members.

“I’d hate to see it die,” Dahl said. “Some younger people would help. We can’t do this alone.”

"These houses are valuable, but they don't accrue value."

Downtown Sun Prairie is historic, and now has the proof.

Beverly and Norman "Pogo" Dahl are two of the three active members of the Deerfield Historical Society. The organization, with a museum on the second floor of the village hall, is struggling to find new members to run the society that was founded in 1983. The society's president and treasurer both died earlier this year. 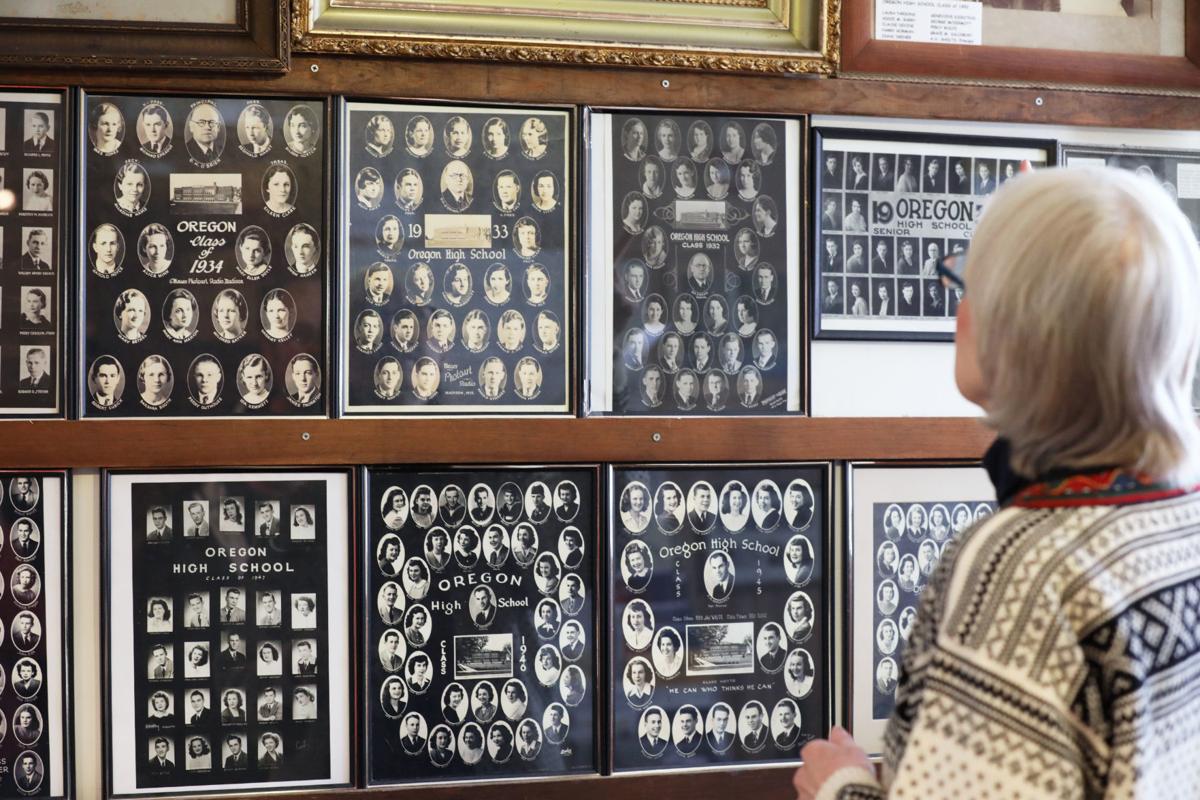 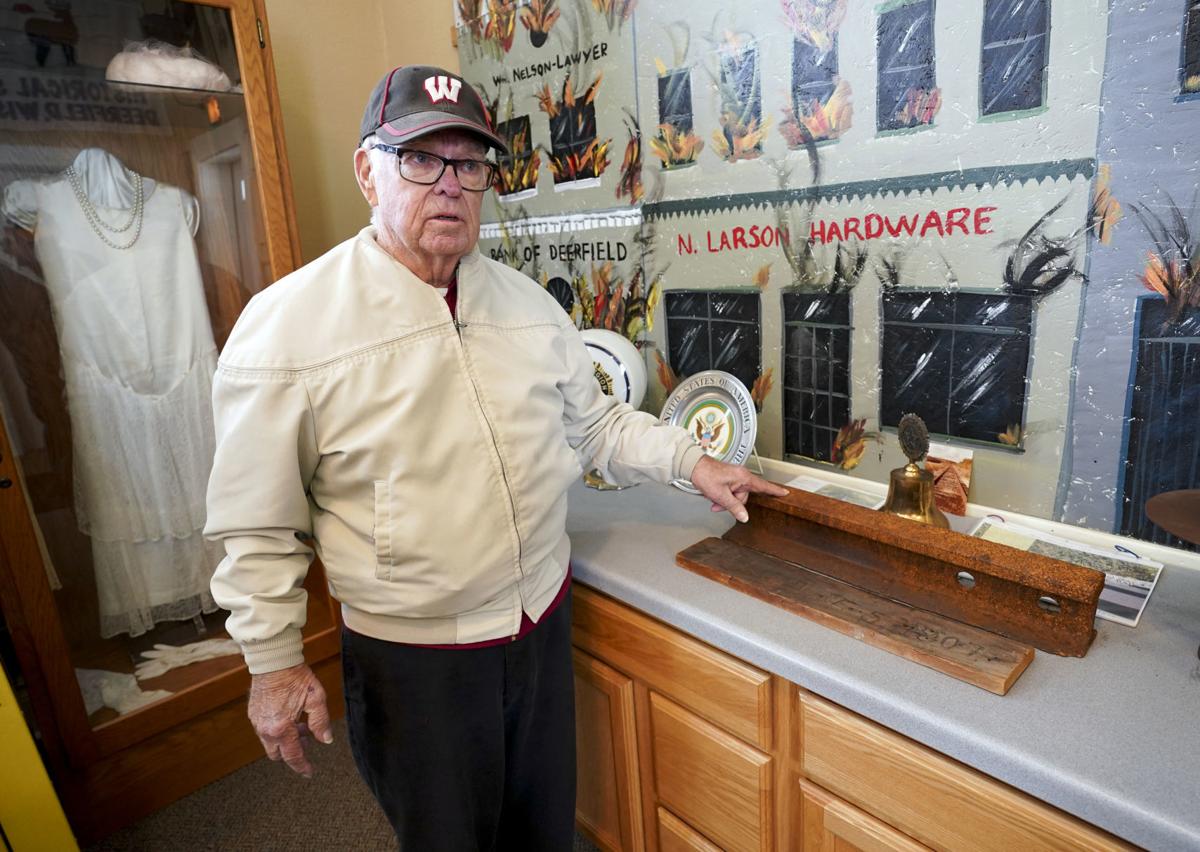 Norman "Pogo" Dahl is a board member at large of the Deerfield Historical Society. Dahl, 87, is seen here with a section of the original rail line that went through Deerfield. A mural behind Dahl portrays a fire that destroyed a large section of the downtown in 1888. 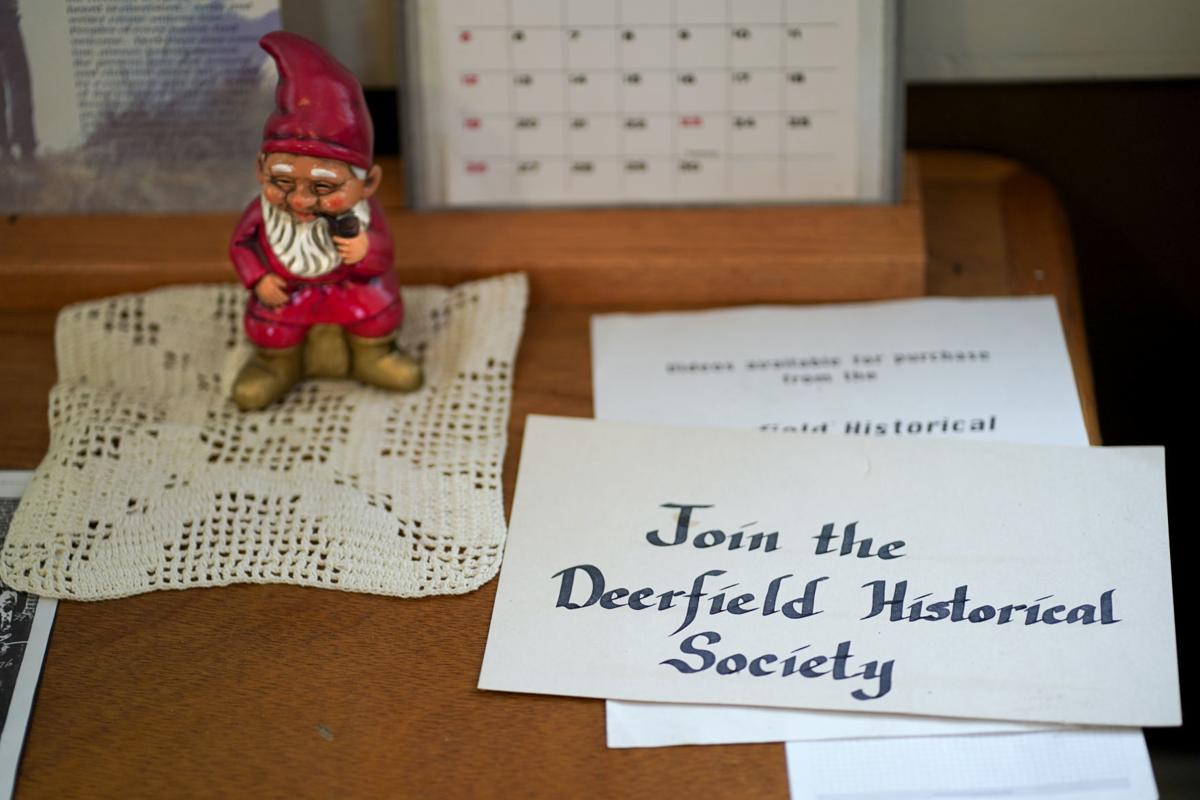 With few active members, the push is on for more participation in the Deerfield Historical Society. A meeting is scheduled for 6:30 p.m. Monday at the Deerfield Public Library to recruit new members for the volunteer organization. 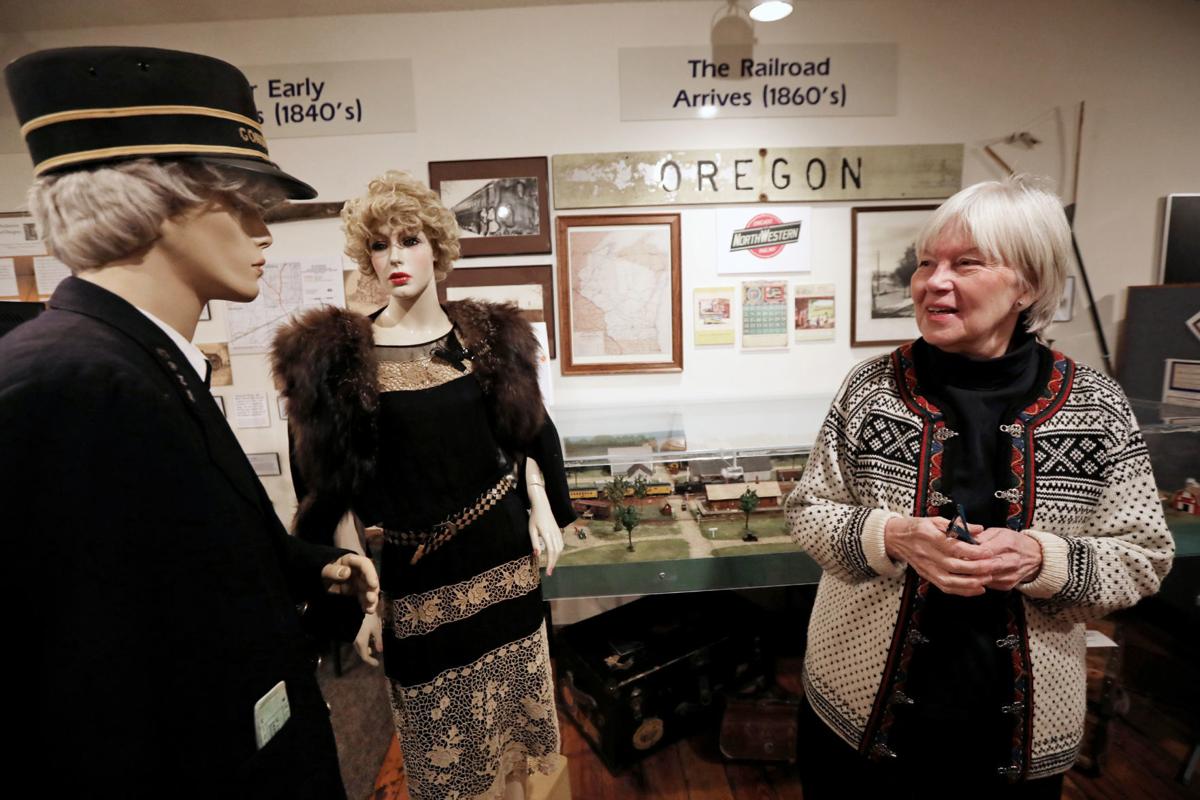 Melanie Woodworth, coordinator of the Oregon Area Historical Society's museum, said attracting younger people to the society can be done by engaging with other organizations like schools, senior centers and churches. Woodworth last week showed off a section of the museum dedicated to the community's rail history. 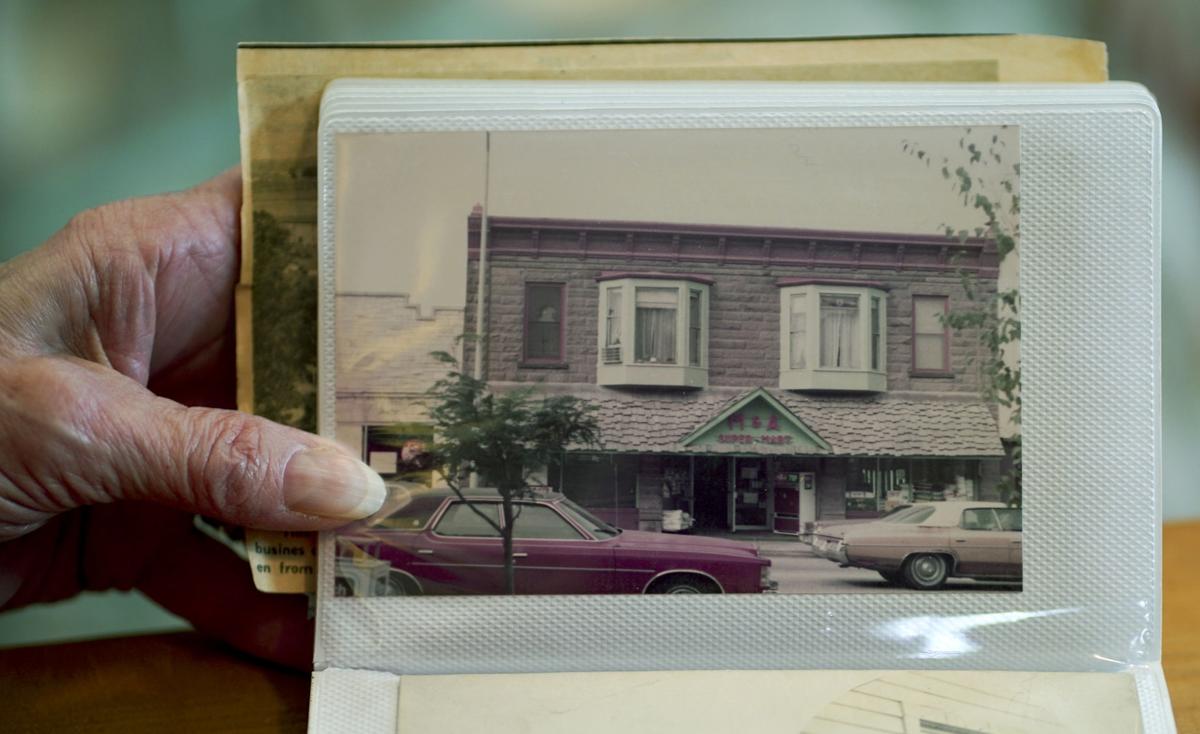 The M&A Super-Mart was a grocery store in downtown Deerfield. The business no longer exists, but its sign is on display in the Deerfield Historical Society's museum above the village hall. 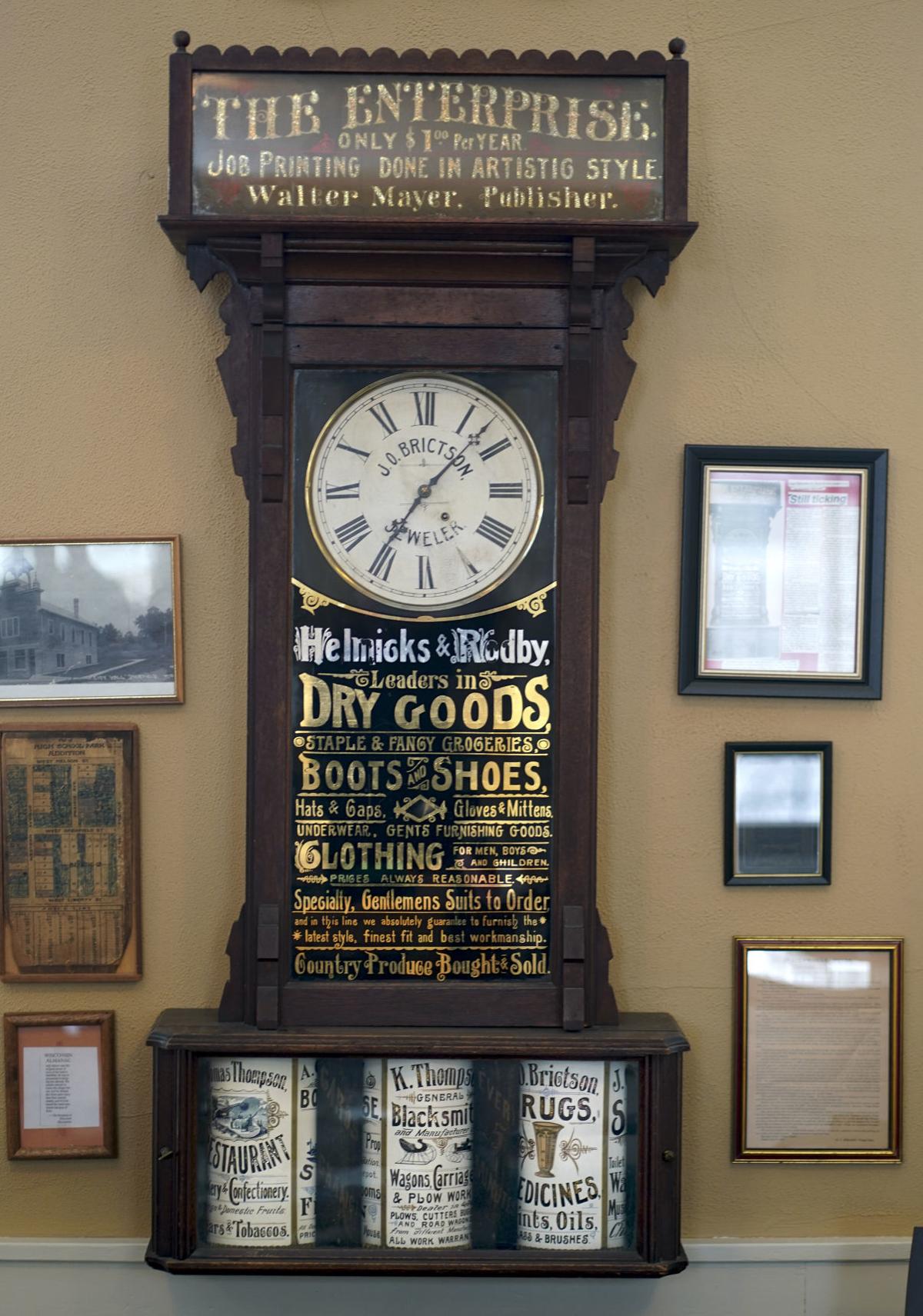 An old clock from the Deerfield post office is among the items on display at the historical society's museum.

There is no grocery store in Deerfield and many of the storefronts are empty, although a new coffee shop recently opened down the street from the village hall.

A mural on the side of a Main Street business details some of the history of Deerfield. 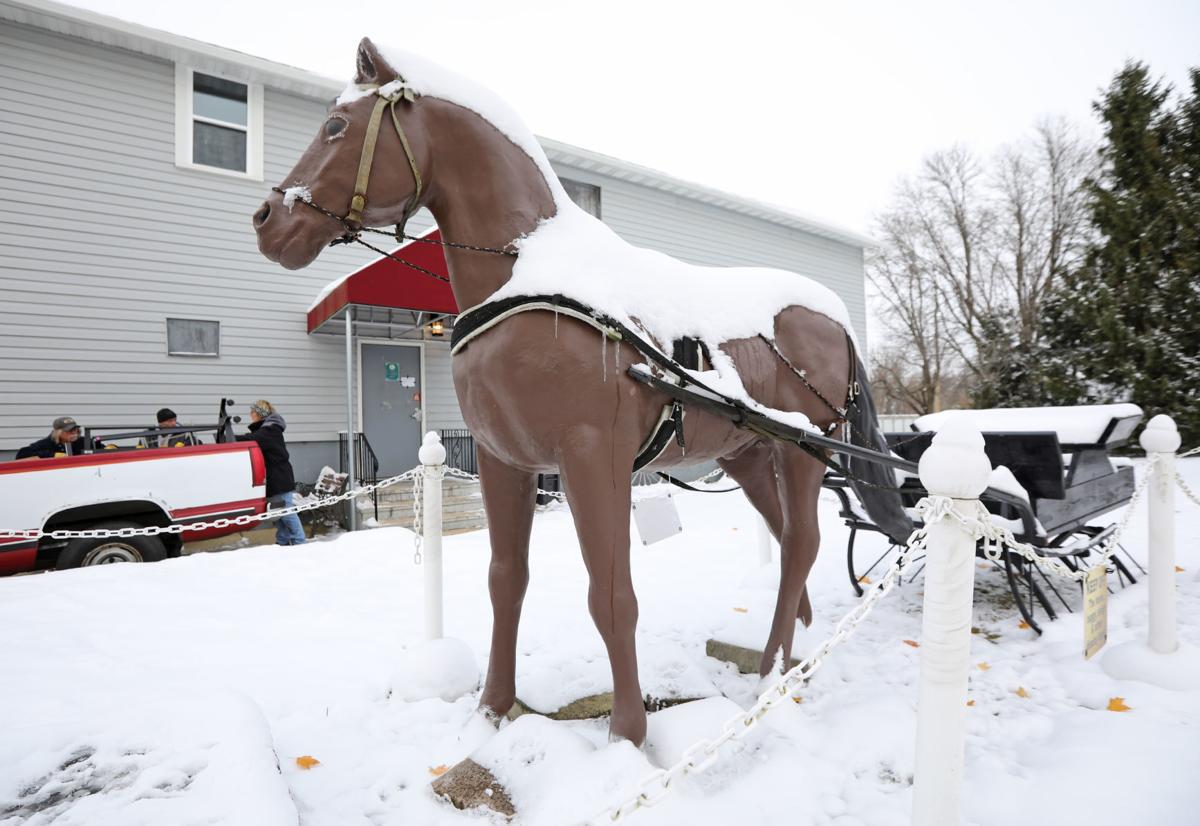 The Oregon Area Historical Society in Oregon pays tribute to the history of the community, including the large number of area horse farms.

Vintage clothing is displayed at the Oregon Area Historical Society museum in Oregon. 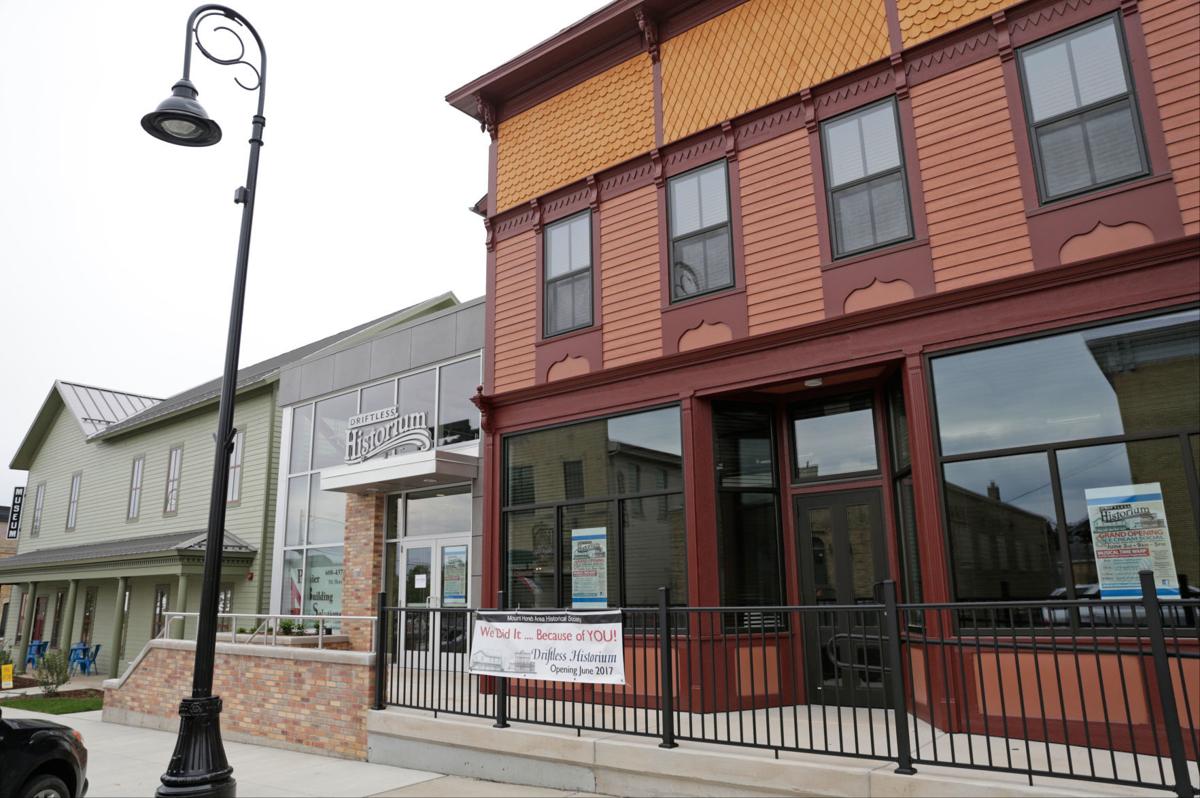 The Driftless Historium, which opened in 2017 in Mount Horeb, includes three buildings and a replica, far left, of the Mount Horeb House Hotel that is home to a special exhibit space, archives, library room and second-floor, climate-controlled storage area. 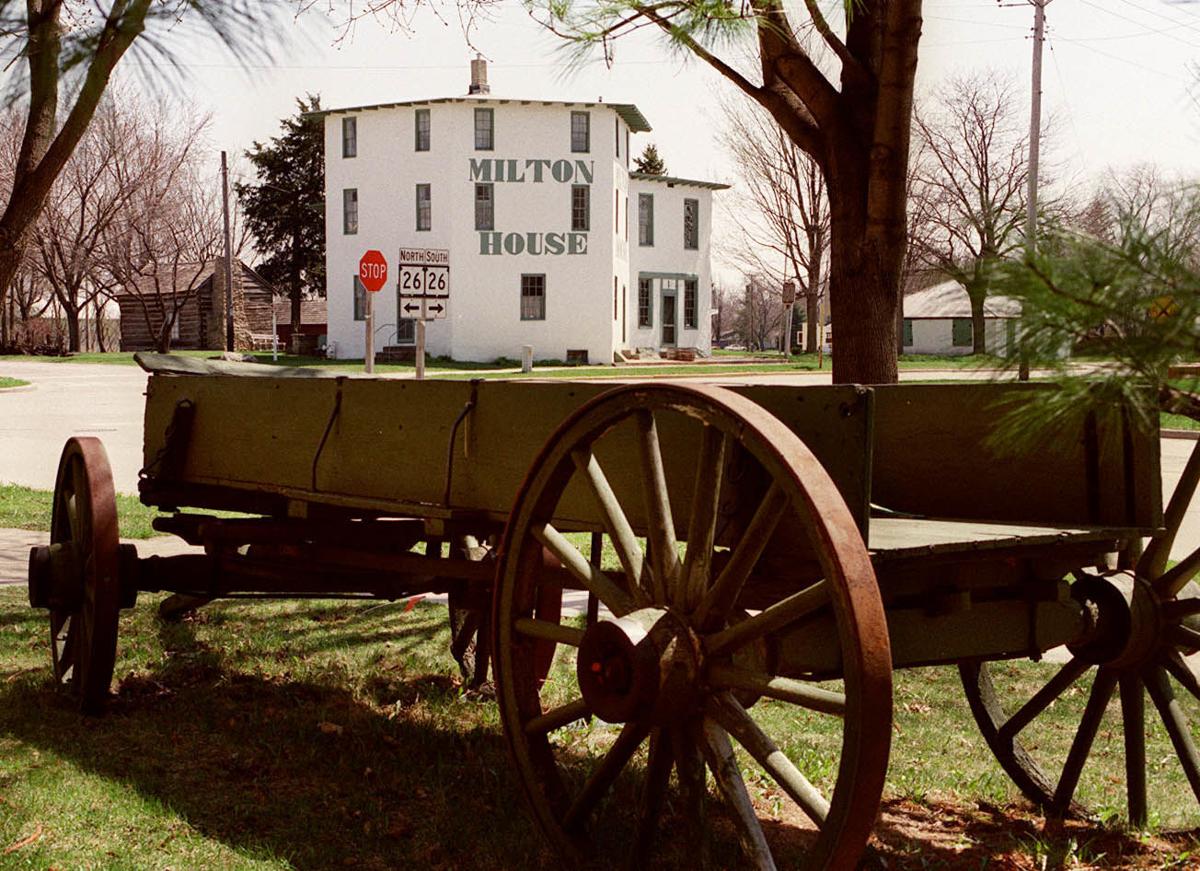 At the crossroads of two wagon trails, Milton founder Joseph Goodrich built the Milton House in 1844, which later became part of the Underground Railroad.