An Ebola vaccine developed at UW-Madison is effective in monkeys and could join four other Ebola vaccines now in human trials, the university said Thursday.

The vaccine was created in the lab of campus virologist Yoshihiro Kawaoka. It protected monkeys from Ebola virus infection in experiments conducted at a high-level containment facility in Montana, Kawaoka reported in the journal Science.

The vaccine uses a strain of Ebola that is safe because it is missing a key protein, university officials said. It can grow only in special animal cells engineered to contain the protein, they said.

In an additional safety measure, Kawaoka’s team chemically inactivated some of the vaccine with hydrogen peroxide.

The vaccine treated with hydrogen peroxide triggered a slightly lower immune response against Ebola in monkeys than the untreated vaccine, but it still protected them from the deadly virus. It worked better than vaccine treated with another method of inactivation — radiation.

“In terms of efficacy, this affords excellent protection,” Kawaoka said in a statement. “It is also a very safe vaccine.”

Ebola, which emerged in 1976 in Sudan and Zaire, has sickened about 25,000 people and killed more than 10,000 in West Africa in an outbreak that started last year. There are no proven treatments or vaccines.

Though a key Ebola protein is missing from the UW-Madison vaccine, it is considered a “whole virus” vaccine because it uses essentially all proteins and genetic material from the virus, Kawaoka said.

That could work better than the four vaccines now in clinical trials, which use only certain Ebola proteins or rely on other viruses to deliver a key Ebola protein, he said.

“Whole virus vaccines present multiple viral proteins and the viral genetic material to the host immune system, which may trigger a broader and more robust immune response than vectored vaccines that present only single viral proteins,” Kawaoka and his colleagues wrote in Science.

The findings in monkeys could prompt further tests and possibly clinical trials of the UW-Madison vaccine, though such trials are expensive and complex to set up, university officials said.

The monkey experiments were funded by the National Institutes of Health and the Japanese government. The vaccine was tested on cynomolgus macaque monkeys at NIH’s Rocky Mountain Laboratory in Hamilton, Montana.

The lab is classified as biosafety level 4, the highest containment level available. The highest level at UW is BSL 3-agriculture, between levels 3 and 4.

Other UW-Madison researchers involved with the project include Peter Halfmann, Lindsay Hill-Batorski and Gabriele Neumann.

Platteville and Stout become the sixth and seventh campuses in the 26-school system to offer buyouts to senior staffers. Others are Eau Claire, Oshkosh, Green Bay, Superior and Milwaukee.

UW-Madison researcher Yoshihiro Kawaoka has been awarded the 2014 Popular Mechanics Breakthrough Award for his work in understanding and preventing pandemic influenza.

Activists on both sides say the vote could provide a blueprint for outlawing similar businesses around the country — eventually targeting large-scale livestock operations.

This undated file image made available by the Centers for Disease Control and Prevention shows the Ebola virus. 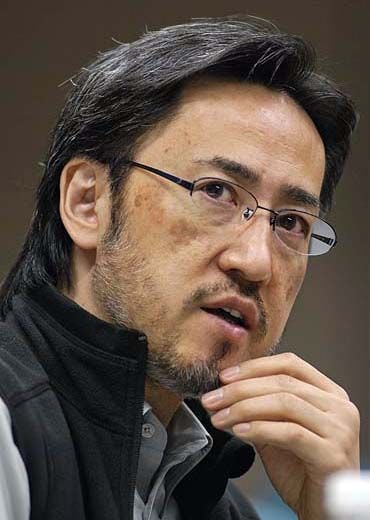 Yoshihiro Kawaoka, a UW-Madison expert on Ebola, flu and other viruses, has developed an experimental Ebola vaccine that protected monkeys from the deadly virus.