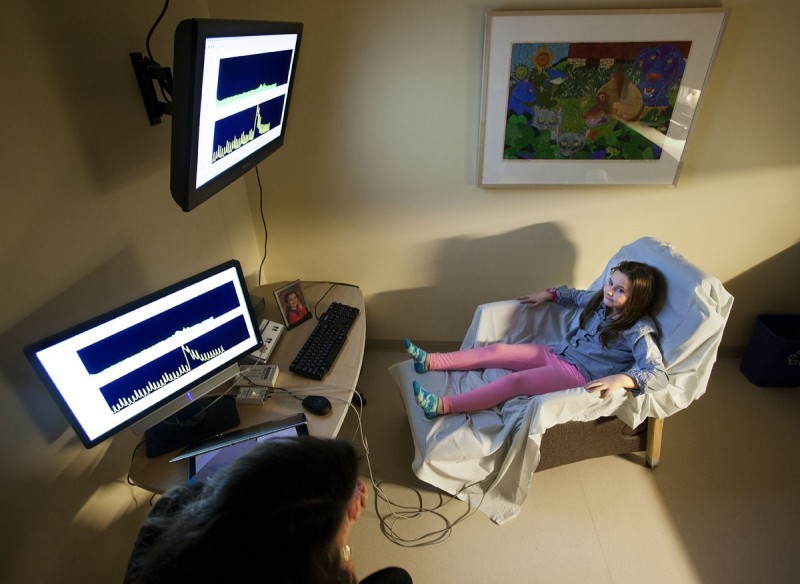 Mallory Buskohl, 9, of Dixon, Ill., follows instructions from Julie Lennon-Kamhi, a nurse at American Family Children’s Hospital, as she undergoes biofeedback therapy that has dramatically improved treatments for incontinence in children. 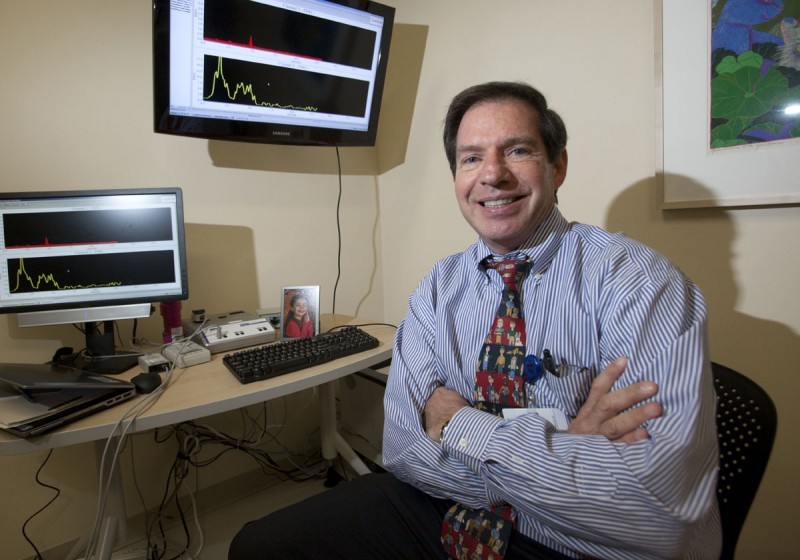 Mallory Buskohl is settled in front of the television screen in a comfortable chair expertly maneuvering her way around a video golf course, driving balls with a satisfying whack down green fairways and chipping like a pro onto smooth greens.

For a 9-year-old like Mallory, mastering such a video game is no big deal. She’s dominating the imaginary golf course, cheering herself on with the infectious enthusiasm of a child lost in play.

But this is no ordinary video game. Mallory is not at her home in Dixon, Ill., — she’s at American Family Children’s Hospital in Madison. And she’s being closely watched as she plays video golf by her father, Ryan, and a nurse, Julie Lennon-Kamhi. Mallory is actually being treated for a problem that makes life for 16 million children in the United States miserable — incontinence.

Tethered to a computer, Mallory is mastering the flight of her purple golf ball not with her hands but by flexing and relaxing the pelvic muscles that control the bladder. This type of treatment is known as biofeedback because it allows patients to adjust their behavior, in this case based on feedback they get from a computer screen and sophisticated software.

The treatment represents a breakthrough in treating children who struggle with bed-wetting and other issues related to incontinence, which are traditionally treated with medications or surgery. Several published scientific studies have shown as much as a 100 percent improvement in clinical symptoms using a combination of the biofeedback treatment and education about diet and bladder habits.

Mallory’s father, Ryan Buskohl, said he and his wife, Misty, had searched for help for their daughter for nearly six years and had almost given up hope of finding an effective treatment. Within nine months of starting the biofeedback program, Mallory’s problems have been reduced dramatically.

“It’s huge,” said Buskohl, while at the hospital for a treatment session recently. “We were at the point where we didn’t know where else to go.”

Such an impressive innovation had a very modest and somewhat serendipitous beginning. It was pioneered by Dr. Patrick McKenna, who is now chief of pediatric urology at American Family Children’s Hospital.

McKenna told how several years ago, while working at the Connecticut Children’s Medical Center, he was attending a urology meeting in Virginia, grew bored, and left a talk to walk down the hall where he found an orthopedics conference in session. Sitting at a booth in the hallway, McKenna said, was a fellow who was trying to interest orthopedists in biofeedback software that had been used by NASA to help astronauts exercise their muscles in space.

The man’s idea, McKenna said, was that the software could possibly be converted for use by orthopedic surgeons to help children rehab from surgeries or injuries. But he was getting no takers.

“We must have spent two or three hours talking,” McKenna said. “No one came to the booth the entire time. Then he just signed the software over to me.”

McKenna returned home with the software but little in the way of ideas about how it could be used. Soon, however, the glimmer of an idea began to grow. Like other pediatric urologists, McKenna was using a combination of medication and surgery to treat children who had chronic bed-wetting problems and other issues related to incontinence. The surgery was invasive and not always successful.

Working with a colleague, Dr. Anthony Herndon, McKenna adapted the rocket game and the golf game to help children retrain pelvic muscles to better control their bladders. By 1999, Herndon and McKenna had conducted their first evaluations and published their results in the Journal of Urology. In initial studies, 8 boys and 33 girls completed the therapy and 90 percent reported improvement after an average of six treatment sessions.

That number improved as testing continued, McKenna said, especially when the biofeedback therapy was combined with education for the patients. McKenna continued perfecting the therapy after leaving Connecticut and moving to a new position in Springfield, Ill. He said testing continued to show not only a very high success rate but a decrease in the urinary tract infections that often accompany incontinence in children. And he added that the number of pediatric surgeries he performs to treat incontinence has dropped from 120 a year to zero.

“Those are the kinds of things that just blow people out of the water with this,” McKenna said.

Three months ago, McKenna relocated to Madison and his post at American Family Children’s Hospital. He brought with him the biofeedback therapy program. And he has been joined by Lennon-Kamhi, who worked with McKenna in Illinois on the project.

Recently, as she patiently led Mallory through her exercises, Lennon-Kamhi said she spends as much time teaching the children self-awareness as she does showing them how to control their muscles. They learn how to eat the right things, including enough fiber, and to remember to drink enough water during the day.

Lennon-Kamhi said the children continue doing the pelvic exercises at home. As important as learning to recognize and use the muscles, she said, is learning to relax them. She’s convinced that the stress children feel today is a big contributor to problems such as incontinence.

“I really teach them what’s going on in their bodies and how to zone in on things,” said Lennon-Kamhi, who calls her little patients “my children.”

“Today, we just don’t teach our children to relax and take care of themselves,” she added.

McKenna said nurses such as Lennon-Kamhi are crucial to the success of the therapy. “It’s really the nurses who make this work,” he said. “They’re really the key players.”

With all the studies and all the clinical success, McKenna said one thing has stood out for him when it comes to evaluating the success of the therapy.

“This is the first time I can remember,” McKenna said, “that the kids are going to their friends and saying to them, ‘Hey, you should try this.’ “

Should people be worried about a recent uptick of five, 10 or 20 pounds as stress mounts and isolation recommendations continue amid the COVID-19 pandemic?

Local officials are urging people, especially young adults, not to gather for what would normally be Oktoberfest weekend in La Crosse.

Sixty-two nursing homes in Wisconsin — none of them in Dane County — have reported a total of 271 COVID-19 deaths, according to new federal data this week.

Sick or treat? State officials advise against trick-or-treating but Dane County says it's OK if modified

"At this time, we ask that people modify their approach to trick-or-treating but are not actively recommending against it," said Sarah Mattes, spokeswoman for the city-county health department.

The pandemic hits home: Keep up with the latest local news on the COVID-19 coronavirus outbreak

The COVID-19 coronavirus pandemic continues to change our lives in ways large and small. Here's a look at all of our coverage.

The county will require face masks to prevent spread of COVID-19 if state order doesn't extend after Sept. 28.

Mallory Buskohl, 9, of Dixon, Ill., follows instructions from Julie Lennon-Kamhi, a nurse at American Family Children’s Hospital, as she undergoes biofeedback therapy that has dramatically improved treatments for incontinence in children.