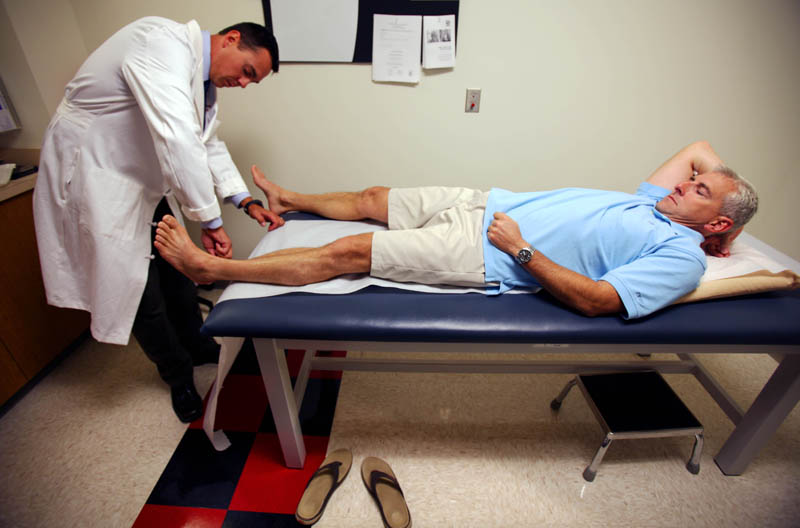 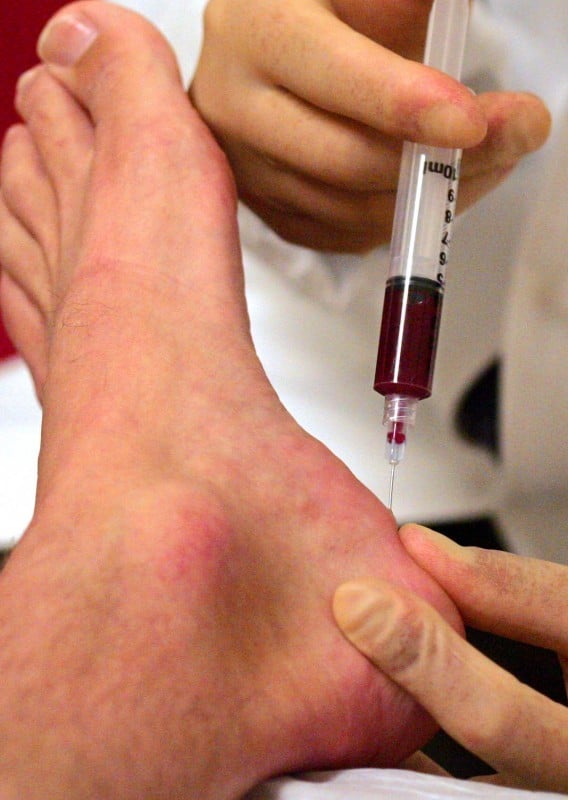 Blood taken from Tom Moore’s arm is injected into his foot after being spun in a centrifuge to increase the concentration of platelets, cells that contain growth factors. 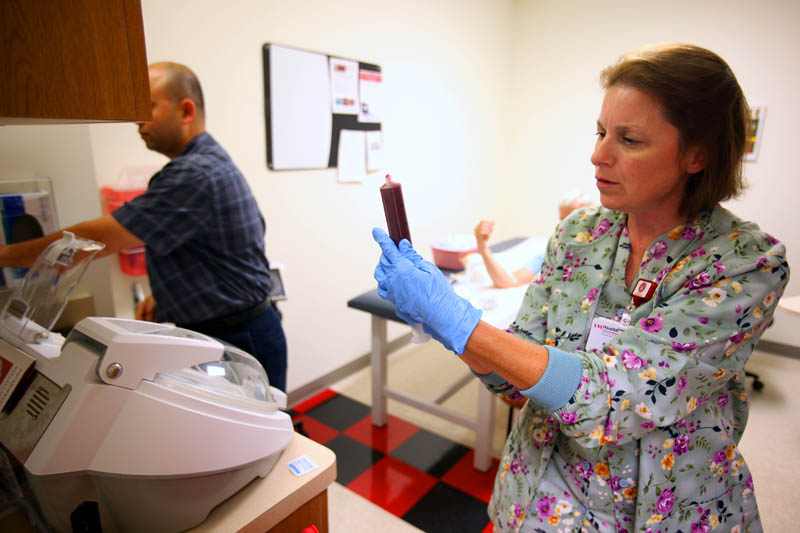 Brenda Staufenbiel, a registered nurse at UW Health, prepares to put blood drawn from patient Tom Moore’s arm into a centrifuge. She drew the equivalent of 10 vials of blood from his arm for the platelet-rich plasma therapy he received. For some applications of the treatment, less blood is drawn. 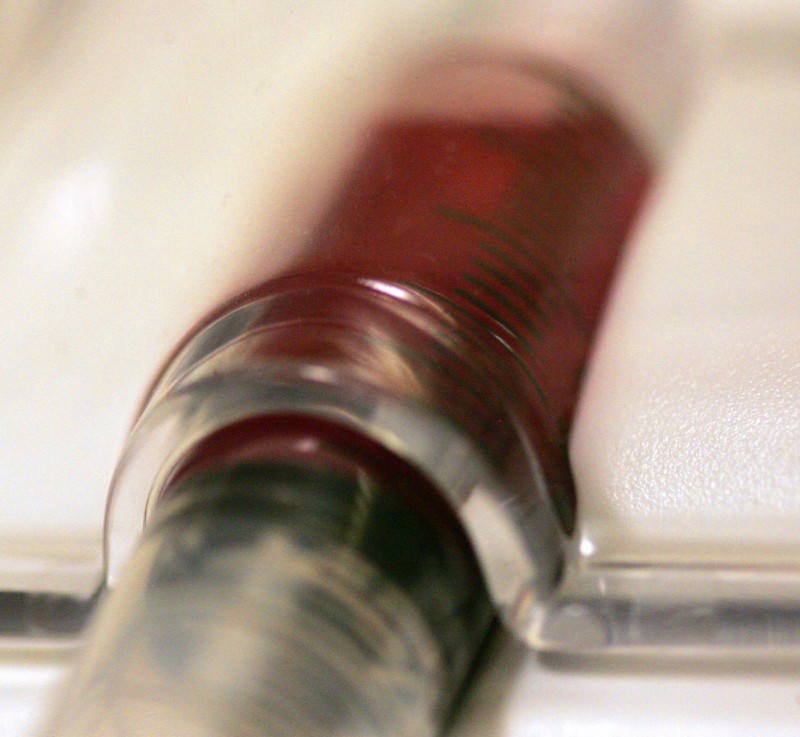 Plasma with a high concentration of platelets is collecting in a syringe after being spun in a centrifuge at UW Health.
By DAVID WAHLBERG 608-252-6125

Recreational athletes with injured tendons and ligaments can now get a treatment in Madison that the pros have been using: platelet-rich plasma therapy.

Hines Ward and Troy Polamalu of the Pittsburgh Steelers, Takashi Saito of the Los Angeles Dodgers and Carlos Beltran of the New York Mets are among the pro stars who have used PRP or a variation of it, according to media reports.

Weekend warriors with tennis elbow, Achilles tendonopathy, rotator cuff pain and other common ailments now can benefit locally from PRP, and student athletes at UW-Madison also have access to the therapy, Wilson said.

"We're using the body's own growth factors to stimulate the natural healing process," he said. "It's for people who have tried everything else and nothing has worked."

A nurse took the equivalent of 10 vials of blood from Moore's arm and spun it in a centrifuge to concentrate the platelets, cells that help blood clot and contain growth factors. Wilson injected a teaspoon of the concoction into Moore's foot. The process took about 30 minutes.

"I hope it works," said Moore, who must wear a boot and use crutches for about a week as his foot recovers. "Being able to run is really important to me."

He had little success with physical therapy, ultrasound therapy, orthotics and other remedies after hurting his foot during a marathon in January.

PRP, considered experimental for soft tissue injuries, is not covered by most insurance plans. Moore paid $650 for his treatment. The price varies depending on how and where the injection is delivered.

PRP has been used since the 1950s to heal bone after some operations. In the 1980s, it caught on in dental surgery. In the past couple of years, as blood processing equipment has become smaller and less expensive, the treatment has taken off for soft tissue injuries, Wilson said.

When people get hurt, platelets rush to the scene. But blood supply to an injured area can be inadequate, and tissue can become jumbled and tight. By delivering more platelets to the area, PRP can improve the healing process of fresh injuries and stimulate new healing of old injuries, Wilson said.

A few small studies have shown promising results for PRP, including one by the main proponent, Dr. Allan Mishra of Stanford University. Skeptics are awaiting more rigorous clinical trials, Wilson acknowledged. The only known side effect is occasional achiness after the injection, he said.

Dr. Brian Reeder, a sports medicine specialist at Dean Health System, said PRP might be a good option for some patients, but he and other Dean doctors don't use it.

Reeder uses another experimental treatment called proliferative therapy, or prolotherapy. Sugar water and saline are injected into an injured area to cause inflammation that prompts the body to send more blood, including platelets, to the scene.

Prolotherapy, also not covered by most insurance plans, costs about $100 to $400 per injection, Reeder said. Three injections are generally given over six to eight weeks.

Reeder usually tries other approaches covered by insurance, such as physical therapy, cortisone shots or electrical stimulation, before suggesting prolotherapy.

Wilson said he does the same before recommending PRP.

Heidi Kaeppler, 46, a runner from Oregon who also plays soccer and basketball, has tried physical therapy, deep tissue massage, cortisone shots and prolotherapy for partial hamstring tears in both legs.

Her pain has continued, forcing her to scale back on her daily runs, which used to last up to 10 miles. "Now the first mile kind of hurts, the second mile is worse and by the third mile it's like I'm doing more harm than good," she said.

Kaeppler is planning to get PRP, which could cost about $1,500 on each leg.

Moore, the runner who received PRP last week, said it's too early to know if the treatment will help him reach his goal: doing the Ironman Wisconsin triathlon in Madison next year.

"I figure there aren't a lot of downsides to trying this," he said. "It's not like I'm going through open-heart surgery."

The controversial plan was never implemented after Gov. Tony Evers' administration put it on hold.

At least half of recent cases sequenced are of the more contagious variants, officials say.

Specialists at Mayo Clinic Health System are lessening the operating room time and recovery period for some patients by performing dual surgeries in a single appointment — with a robot assist.

Eight of 10 COVID-19 deaths reported in the U.S. have been in adults over the age of 65 years old, but 86-year-old Kathy Aiello beat the odds and after four months of rehab, went home.

A study found a 41% increase in binge drinking among women since the COVID-19 pandemic began.

As COVID-19 vaccine eligibility opened up to the general public last week, Portage and Baraboo health care providers didn’t see the same influx of appointment requests as in previous groups, though they said it’s too early to know why.

Vaccination rates for most racial and ethnic minorities are lower than for whites statewide and in Dane County.

Blood taken from Tom Moore’s arm is injected into his foot after being spun in a centrifuge to increase the concentration of platelets, cells that contain growth factors.

Brenda Staufenbiel, a registered nurse at UW Health, prepares to put blood drawn from patient Tom Moore’s arm into a centrifuge. She drew the equivalent of 10 vials of blood from his arm for the platelet-rich plasma therapy he received. For some applications of the treatment, less blood is drawn.

Plasma with a high concentration of platelets is collecting in a syringe after being spun in a centrifuge at UW Health.
© Copyright 2021 Capital Newspapers Inc., madison.com , 1901 Fish Hatchery Rd Madison, WI | Terms of Use | Privacy Policy
Powered by BLOX Content Management System from TownNews.com.
You don't have any notifications.