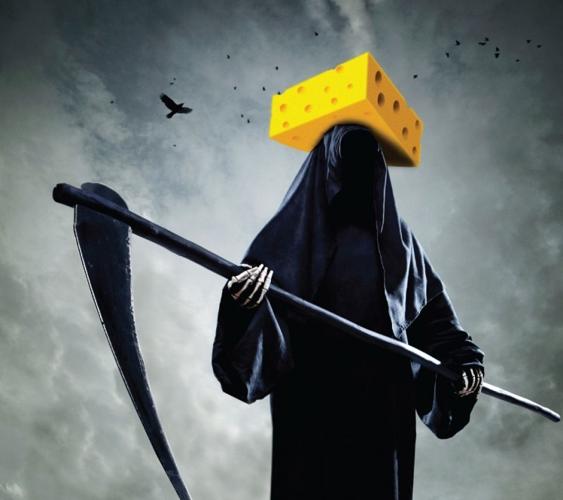 An anti-cheese billboard from Physicians Committee for Responsible Medicine is set to go up in Green Bay, the heart of America's Dairyland.

An anti-cheese billboard scheduled to go up Tuesday in the heart of America's Dairyland is drawing opposition from cheese lovers and a threat of legal action from a maker of fake cheese.

The billboard, to be erected near Green Bay by the Washington, D.C., vegan organization Physicians Committee for Responsible Medicine, shows the Grim Reaper wearing a foam Cheesehead. The wording reads: "Warning: Cheese can sack your health."

The Wisconsin Milk Marketing Board criticized the billboard Monday, and the owners of a fourth generation cheese company in De Pere near where the billboard is going up called it "silly."

The folks at Foamation, which for the past 25 years has been making foam cheeseheads, ties and other yellow foam products near Milwaukee, aren't amused. They've asked their attorneys to get involved. The hat is a licensed product but is being used by the Physicians Committee without Foamation's approval.

"This is an infringement," said Denise Kaminski, office manager at Foamation. "We want them to pull it or cover it up. It's a very negative thing and we don't want to be associated with something like this."

The billboard was scheduled to go up Monday but was postponed to Tuesday because of inclement weather, said Vaishali Honawar, a spokesman for the Physicians Committee.

Wisconsin is the country's top cheese-producing state and has 129 cheese plants. In 2010, cheesemakers created 2.6 billion pounds of cheese, according to the National Agricultural Statistics Service of the USDA.

The Physicians Committee, which in July put up a billboard near the Indianapolis Motor Speedway criticizing hot dogs, said it is only looking for media attention so that it can spread its message nationally.

The Fox Valley, home to the Green Bay Packers and the world's largest cheese company, Schreiber Foods, seemed like a natural fit, said Susan Levin, a registered dietitian with the Physicians Committee, a nonprofit that opposes consumption of meat and dairy products.

"Cheese is an unhealthy food product," Levin said. "Cheese is the antithesis" of what we're supposed to be eating.

In general, foods that come from animals, like milk and meats, are higher in fat, according the USDA.

Laura Wilford, a registered dietitian with the Wisconsin Milk Marketing Board in Madison, said the billboard — the only one of its kind in the country — has been drawing media inquiries from around the state and Chicago.

"It's causing a lot of noise today," Wilford said. "They're presenting a very slanted side of cheese."

She said cheese provides calcium and sodium, and having 1.5 ounces of cheese a day "is certainly sensible."

At the family-owned Scray's Cheese in De Pere, cheese making has been a way of life since 1924. The company last week put up a billboard of its own near Lambeau Field with a piece of cheese on a cracker. The wording reads: "Make a cracker smile."

Kayla Scray said that's what she and most of her customers are doing because of the Grim Reaper billboard.

"People around here are thinking it's silly and ridiculous," Scray said. "Cheese is a dairy product essential for your diet and it's a tradition, especially in Wisconsin."

Threatened with a lawsuit by the company that makes the foam Cheeseheads, a vegan group on Tuesday blacked out the wedge of faux cheddar worn by the Reaper in a billboard disparaging the state's cheese industry.

"Silly and ridiculous" is reportedly what Kayla Scray's cheese shop customers thought about putting up a billboard near Lambeau Field showing the Grim Reaper with a wedge of cheese on its head and the words "Cheese can sack your health."

Mike Nichols: Cheese never killed anyone, so there

You may have heard some East Coast vegans put up a billboard not far from Lambeau Field with a picture of the Grim Reaper on it, and the not-so-subtle suggestion that cheese kills. This is exactly the opposite of the message we Wisconsinites have been hearing ever since being fed deep-fried cheese curds in our high chairs.

An anti-cheese billboard from Physicians Committee for Responsible Medicine is set to go up in Green Bay, the heart of America's Dairyland.