With vaping on the rise among high school students in Dane County and a federal official calling teen e-cigarette use an epidemic, local health officials are sounding an alarm and working with schools and retailers to curb the trend.

“It seems the intent is to start them on these products, and eventually they will switch to traditional tobacco products,” said Sara Sahli, Wisconsin government relations director for the American Cancer Society Cancer Action Network. “It’s a gateway to addicting a whole new generation.”

Nearly 19 percent of high school students in Dane County say they vaped in the past month, according to a youth assessment released last month. That’s up from 16 percent three years ago.

Food and Drug Administration commissioner Dr. Scott Gottlieb last month called increasing e-cigarette use among youths a national epidemic. He told manufacturers he would pull flavored vaping products if they didn’t work to stop underage use.

E-cigarettes and other vaping devices, which vaporize liquid nicotine, are illegal in Wisconsin for anyone under age 18. But since they don’t carry the harmful risks of combustible tobacco, they have been touted as a way to get adult smokers to quit regular cigarettes.

Nicotine is highly addictive and harmful to developing brains, however, and vaping can expose users to heavy metals and chemicals, health officials say.

Studies have found that teens who use e-cigarettes are three times as likely to become cigarette smokers, according the Wisconsin Department of Health Services.

Many vaping liquids come in flavors — such as mango, bubble gum, cotton candy and “unicorn puke” — that appeal to youth, health officials say. Officials are especially concerned about Juul, an e-cigarette introduced in 2015 that resembles a USB flash drive and can be easily concealed.

Juul has become so popular that many young people refer to vaping as “Juuling.” More than 16 million Juul devices were sold at retail stores last year, up from about 2 million the year before, according to the Centers for Disease Control and Prevention. Last week, the FDA seized documents related to sales and marketing in a surprise inspection at Juul Labs in San Francisco.

“We are concerned about youth who are never users starting to use this product because the nicotine hit is so strong,” Sheahan said. “The nicotine goes straight to the brain. They’re becoming addicted faster and harder.”

The Madison School District added vaping devices to its behavior education plan this year, said Sally Zirbel-Donisch, health services coordinator. Staff are asked to confiscate the devices, and repeat offenses can result in an in-school suspension, she said.

School nurses are starting to develop information about vaping for teachers and other staff, with training sessions planned, Zirbel-Donisch said.

“The district is concerned,” she said. “There are some pretty significant side effects for kids.”

Nina Gregerson, health education coordinator for the Tobacco Free Columbia Dane County Coalition, said a survey of Dane County schools found nearly half had not provided staff training about vaping. All districts said they wanted help to do so, though, and the coalition intends to provide it.

The FDA, citing unreleased data that shows a sharp rise in underage vaping, has shifted its tone on e-cigarettes. Gottlieb previously said the devices could help adult smokers quit, an unproven benefit that he said should continue to be researched.

But, “the FDA won’t tolerate a whole generation of young people becoming addicted to nicotine as a trade-off for enabling adults to have unfettered access to these same products,” he said.

Gottlieb said the agency would give the five largest e-cigarette manufacturers until mid-November to explain how they’ll reduce underage use. The FDA also released a list of more than 1,300 warning letters and fines to stores that have illegally sold e-cigarettes to minors.

Of the 27 stores cited in Wisconsin, the closest ones to Madison are a Cenex gas station on Water Street in Prairie du Sac and a BP gas station on 20th Avenue in Monroe.

Public Health Madison and Dane County issued six fines to five vape shops for selling e-cigarettes to minors in 2015, and gave five fines to three shops in 2016. None was fined last year.

In 2015 and 2016, stores fined more than once were Azara Hookah and Knuckleheads, both on State Street in Madison, and MadTown Vapor in Cambridge.

Rich Farrer, who works at Infinite Vapor on University Avenue, said the store is careful not to sell to minors. “We card everybody; it doesn’t matter if you’re 90 years old and walk in with a cane,” he said.

Infinite Vapor’s University Avenue store has not been fined by the health department. The company’s East Side location, on Atwood Avenue, was fined in 2016.

A bill to require retailers to keep vaping materials behind the counter along with cigarettes passed the state Senate last year but was not approved by the Assembly.

Vaping has not been added to the state’s 2010 indoor smoking ban. But 14 cities, including Madison and Milwaukee, prohibit e-cigarette use in workplaces including bars and restaurants, said Sahli, of the cancer society.

Dane County and Florence County, in northern Wisconsin, have similar policies. Five other cities and 21 other counties ban vaping at municipal properties.

Public housing in Madison became smoke-free and vape-free in January, and some private complexes have adopted similar policies, Gregerson said.

In the first study, about 150 smokers, half of whom also vaped, were asked to greatly reduce their smoking for a week and quit completely for a few days. Those who vaped and smoked, known as dual-users, were better able to do both than those who smoked only cigarettes, said Doug Jorenby, a UW-Madison professor of medicine and the center’s director of clinical services.

However, exhaled levels of carbon monoxide, which is specific to tobacco smoking, were similar in both groups.

“If the dual-users are cutting back on smoking, it’s not enough to make a difference,” Jorenby said.

The second study is comparing health outcomes among 150 smokers and 250 dual-users and seeing if vaping changes smoking rates.

Scientists have identified genetic risk factors that may make some people more dependent on nicotine as adults if they’re exposed as teens, Jorenby said. That, combined with studies showing teens who vape are more likely to become smokers, makes the rise in underage vaping worrisome, he said.

“In adolescents, e-cigarettes may be triggering genetic risk factors that otherwise would remain dormant, and it seems like vaping is a pathway to cigarette smoking,” he said.

The mayor and nine council members want to add electronic cigarettes to Madison’s smoking ban, which prohibits smoking in most indoor places.

Competing bills would protect or ban vaping in public places

Local governments could not broadly ban electronic cigarettes in public places, as Madison did in January, under a bill to be introduced next …

Wisconsin, which has two confirmed cases of a rare paralyzing illness that mostly affects children, is investigating another six possible case…

Many counties subsidize their nursing homes, but only a few have sought voter approval to increase levy limits to help pay for the facilities.

UW Health has hired an administrator for the newly created title of president of UW Hospitals, Madison region.

The finding involving the protein p53 — for which no drugs have been developed, despite its link to many cancers — could provide a target for drug development, the scientists said.

Wisconsin bill would set age at 21 to buy tobacco, nicotine

E-cigarettes have been gaining in popularity among Wisconsin high school students despite concerns about damage the chemicals in the devices may cause to the heart and lungs.

Citing 34 cases of severe lung disease from vaping in Wisconsin and more than 200 cases nationwide, the head of Public Health Madison and Dane…

Wisconsin bill seeks to stop anyone under 21 from vaping, smoking

E-cigarette use increased by 154% between 2014 and 2018, according to the Wisconsin Department of Health Services. As of last year, one out of every five students used them, the department said.

The research is evaluating cigarettes with nicotine levels low enough to be minimally addictive, which the Biden team is reportedly considering requiring. 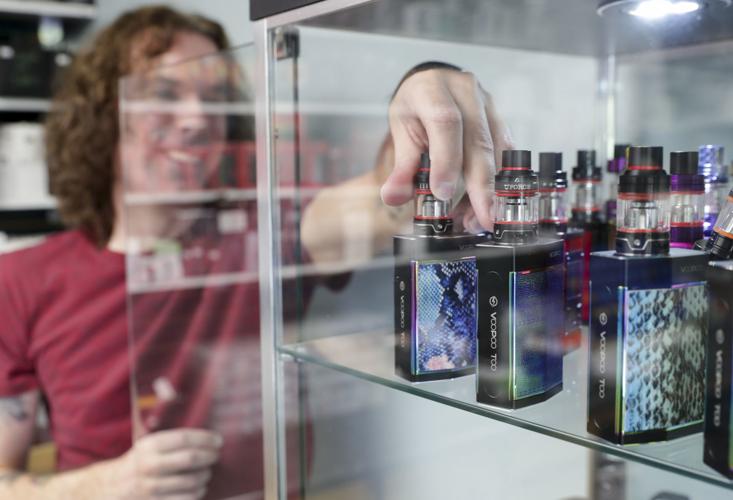 Kevin DeBauch, owner of Hydra Puff Vapes on Madison's East Side, arranges vaping devices in his store. Health officials are concerned that more teens are starting to use electronic cigarettes, which vaporize nicotine, a substance that can be harmful to developing brains. 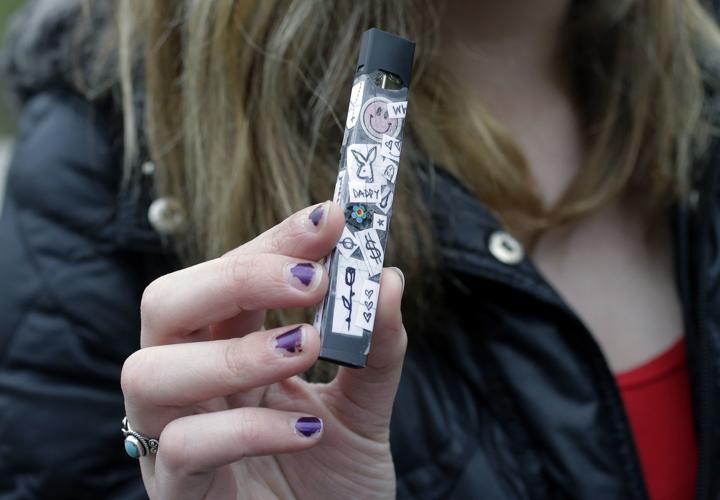 A 15-year-old high school student displays a vaping device in Cambridge, Massachusetts. Juul vaping devices, which look like a USB flash drive, can be easily concealed. 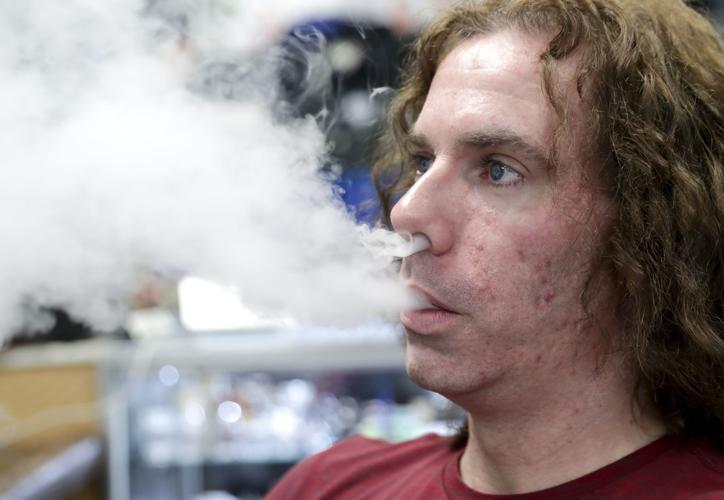 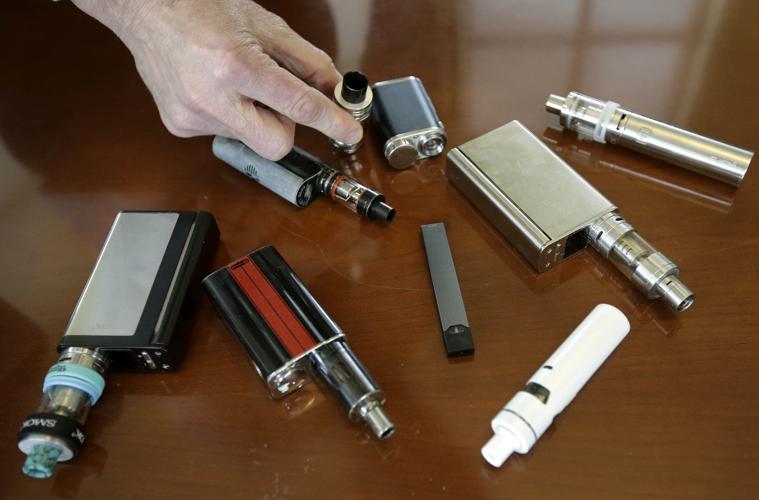 A high school principal displays vaping devices confiscated from students in restrooms and hallways at a school in Massachusetts. In Dane County, 18.8 percent of high school students say they've vaped in the past month. In the Madison School District, it's 14.9 percent. 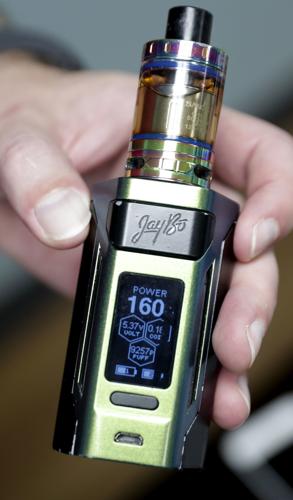