With community spread of COVID-19 now detected in the state and hundreds of coronavirus test specimens coming in daily to UW-Madison’s Wisconsin State Laboratory of Hygiene, the lab has more than tripled its capacity and is staying open on weekends.

Gov. Tony Evers on Monday ordered a statewide ban on all gatherings of 50 or more people. The state Department of Health Services said the state has 47 cases of COVID-19, including 10 cases in Dane County, one of whom has recovered. Another 504 people have tested negative.

Some of the newly diagnosed people haven’t traveled out of state or been in contact with other known cases. “This means the virus is spreading in Wisconsin communities,” said Dr. Ryan Westergaard, chief medical officer with DHS’ Bureau of Communicable Diseases.

It’s not clear how widespread person-to-person transmission is around the state, but the community spread underscores the need for everyone to stay away from others as much as possible, Westergaard said.

The state lab, which started testing for the new coronavirus two weeks ago, had said until last week it could test about 100 specimens a day.

“Because of that huge increase in (samples coming in), we decided to bring in a bunch of people over the weekend and get those out,” Bateman said. “Going forward, we plan to be testing seven days a week, as long as we need, for the foreseeable future.”

People with cough, fever and shortness of breath, who have traveled to places with widespread COVID-19 or been exposed to people with it, should contact their doctors about getting tested. Health officials ask people to call ahead so clinics and hospitals can be prepared.

People with mild symptoms, like with a common cold, should self-isolate at home and not seek testing, Westergaard said. People with mild or no symptoms can be infectious and spread the disease to others without knowing it, he said.

In addition to the state lab on the UW-Madison campus, the Milwaukee Health Department Laboratory has also been testing. A few national labs, including Quest and Labcorp, are accepting samples, and Froedtert Hospital and the Children’s Hospital of Wisconsin near Milwaukee are also testing.

A total of about 600 specimens can now be tested in the state each day, Westergaard said.

Another five hospital labs in the state should be able to start testing soon. “We expect those will be up and running in the next one, two or three weeks,” Bateman said.

The federal government is poised to approve new test kits by commercial manufacturers, and another 60 to 80 hospital labs in the state should be able to use those within a month or two, Bateman said.

Drive-through testing, which is being offered in some states, is being considered in Wisconsin, said Andrea Palm, state health department secretary. “We continue to look at options for centralized collections of specimens,” she said.

Health systems will need to decide if such testing — which collects samples from people in vehicles, but doesn’t produce results right away — is a proper approach for them, Westergaard said.

Since the state lab began testing for the new coronavirus March 2, it has handled about 1,000 samples, Bateman said. Some patients have more than one sample.

“Currently, we don’t have any backlog,” he said. “We probably would have had a backlog if we wouldn’t have tested Saturday and Sunday.”

The lab’s supply of chemicals needed to run the tests is “OK but not great,” with temporary shortages of some components, he said. “We could blow through a lot of reagents and supplies really quickly. We’re trying to order as much as absolutely possible.”

In addition to testing on weekends, the lab is extending its weekday hours, spokeswoman Jan Klawitter said. The last time the lab ramped up operations to this extent was during the H1N1 swine flu pandemic in 2009, though it didn’t do as much testing then on Sundays, Klawitter said.

Dane County schools closing immediately due to COVID-19, restaurants to reduce capacity by half

Some lab workers who typically do other kinds of testing are switching to coronavirus testing, Bateman said. But the lab is continuing its other work, such as newborn screening and testing for flu, tuberculosis and foodborne illness. If COVID-19 demand continues to rise, the lab might cut back on some research testing.

“It’s a consistently moving target as we continue to scale up even more,” Bateman said.

Statewide impact: Tourism, a pillar of the Wisconsin economy, has all but shut down, A3

The markets: Monday was Wall Street's worst day in more than three decades, A4 & A7

The daily update: A roundup of coronavirus news from across the nation and world, A5

This table tracks the number of cases, recoveries and deaths for the U.S. including its territories.

Madison and Dane County officials on Sunday announced restrictions for restaurants that reduce seating capacity by 50%.

Most Wisconsinites aboard Grand Princess cruise ship return to state

Parts of Wisconsin could see snowstorm later this week, potentially heavy snow for some areas

The key for how much snow falls is whether two storm systems moving through the region later this week come together or stay separate, according to forecasters.

With 46 active cases of COVID-19 in Wisconsin, Tony Evers bans gatherings of 50 or more people statewide in effort to slow virus' spread

Businesses like grocery stores, food pantries, childcare centers, pharmacies and hospitals will be exempt from the order.

The “level 1” alert means all state agencies and key volunteer organizations like the Red Cross are in communication during the state of emergency, said Andrew Beckett, spokesman for Wisconsin Emergency Management.

The jail is making several changes to its operations, including holding hearings via video conferences and stepping up its cleaning and disinfecting practices.

The 24-hour casino will temporarily close starting at 7 a.m. Tuesday. During the closure, the facility will undergo a deep cleaning.

The agency is also working to suspend state and federal testing requirements.

The Madison School District started offering free pick-up meals for students Monday as families start to adjust to what it means for school to be closed for at least three weeks.

Madison hospitals postponing some procedures as COVID-19 spreads in community

Madison hospitals started postponing nonessential procedures Tuesday as community spread of COVID-19 was confirmed in Dane County, along with Kenosha and Milwaukee counties.

The Madison School District will provide free bagged breakfasts and lunches for children Monday through Friday at 12 sites throughout the district.

UW-Madison Housing officials say it is just a hypothetical at this point. Other universities across the U.S. are discussing the idea as COVID-19 cases rise. 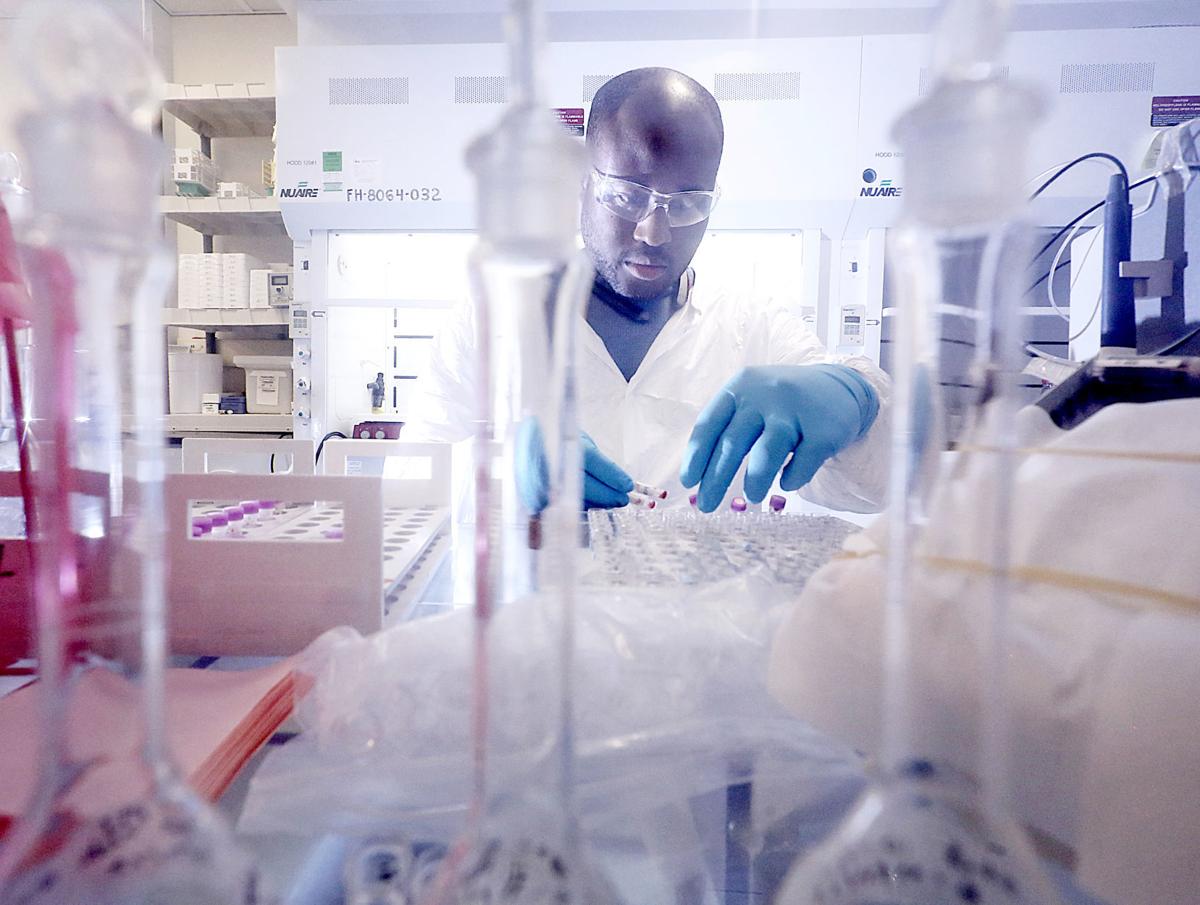 Irvin Palmer, senior chemist at the Wisconsin State Laboratory of Hygiene, prepares blood samples for lead testing at the lab's facility on Agriculture Drive on Madison's Southeast Side in 2017. 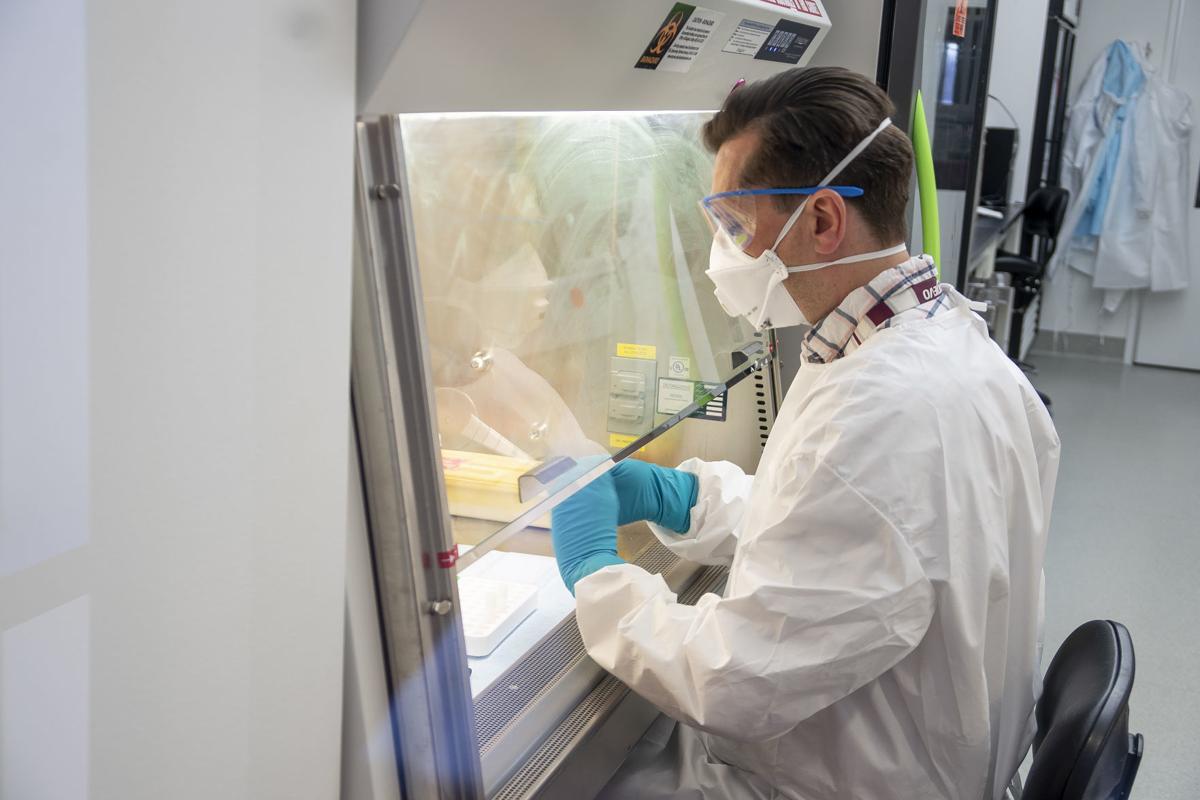