In a new twist at UW Hospital, some living kidney donors are also parting with blood stem cells, which are infused into the kidney transplant recipients. The goal is to give recipients a dual immunity so they can accept the foreign organ without taking lifelong anti-rejection drugs, which are costly and have side effects, including damage to their kidneys.

“It’s always been a dream to significantly minimize, if not completely eliminate, those medications,” said Dr. Dixon Kaufman, UW Hospital’s transplant chairman. “We believe this will translate into a more durable, better-functioning kidney transplant.”

Quale and Okey, sisters from Platteville, were the first pair to try the new approach at UW Hospital, which is part of a national study.

“Getting off of anti-rejection meds is awesome if I can,” said Okey, 48.

Nearly 35,000 Americans received organ transplants last year from living or deceased donors. To keep their bodies from rejecting the organs, they permanently take pills to suppress their immune systems, which can increase their risk of infection and chronic diseases, and eventually degrade their new organs.

The study by Medeor Therapeutics — a company in San Mateo, California, that is based on research at Stanford University — substitutes the donor’s immune system for the anti-rejection drugs.

In Madison, the process started in late September, when Quale took injections to boost stem cells in her blood. Nurses collected the cells through a blood filtering machine at UW Hospital.

On Nov. 5, Quale donated a kidney to Okey through a regular transplant.

Okey started on anti-rejection drugs, as normal. She also received radiation for 10 days, which typically is not done. The radiation tamped down her immune system and prepared her to accept her sister’s cells.

On Nov. 16, the last day of radiation, Okey received Quale’s immune cells through an intravenous line. The cells had been shipped to Medeor for processing.

Before her infusion, Okey was allowed to stop taking one of three anti-rejection drugs. In a few weeks, she’ll quit another. If all goes well, doctors will wean her off the third one in six months and completely drop it within a year.

Monthly tests will check if Quale’s immune system continues to reside in Okey. Typically, recipients end up with about 85 percent of their immune system and 15 percent from their donor, Kaufman said.

“As long as there’s a portion of her sister’s immune system, which is the same as what her donated kidney sees, it alters Barb’s system so it doesn’t reject the kidney,” he said.

So far, the approach is limited to living donors and recipients whose tissue types match perfectly. Of the 100 or so living donor kidney transplants done at UW Hospital each year, only four or five involve perfect matches, Kaufman said.

He is working with Dr. Sam Strober of Stanford to adapt the technique for partially matched or mismatched pairs. Most of that research is in rhesus monkeys, not people. Kaufman and Strober are scientific advisers to Medeor.

Similar studies at some other centers infuse the donor’s blood stem cells into the recipient before the kidney transplant. But Kaufman said doing it afterward could eventually work with deceased, as well as living, organ donors. It’s not possible to select deceased donors and acquire their immune cells far in advance, as it is with living donors.

Quale, a nurse at Southwest Health in Platteville and Upland Hills Health in Dodgeville, wasn’t troubled by giving up immune cells along with her kidney. The cell-boosting injections made her feel like she had the flu, however, and she had significant discomfort after the surgery.

“I’m not going to lie; it was rough. But I’m doing much better now,” she said last week.

Okey is grateful that Quale, one of her four siblings, was medically and emotionally fit to help.

Okey developed an inflammatory kidney disease nearly 20 years ago. Last year, it suddenly got worse, prompting her doctor to say she needed a transplant.

The condition made her retain water, causing her arms and legs to swell. She became so tired she could barely make it through the day without sleeping. Despite that, she kept up her job in the laundry department of an assisted-living facility.

Now, even as she continues to recover from her transplant, she already feels better.

“I have more energy than I did before,” she said. “I can stay awake all day.”

An expensive but promising gene therapy approved a year ago for children with leukemia has had mixed results in patients at UW Health, the fir…

Bone marrow transplants, used routinely for leukemia and other diseases, worked only in identical twins until the first successful transplants involving other siblings as donors took place 50 years ago in Madison and Minneapolis.

Pigs into people: UW joins renewed effort to use animals as organ donors

For half a century, doctors have said human organ transplants will someday be replaced by xenotransplantation, or putting animal organs into people.

“If you have the power to help someone, why wouldn’t you?” said Landen Wilke, 26, of Green Bay.

Dr. Matthew Weiss’ “patient,” an older man playing the role of an 80-year-old with diabetes, told Weiss he recently fell on the way to the bat…

Eleven patients at UW Hospital have developed Legionnaires’ disease, apparently from the hospital’s hot water system, and four of them remain …

The deaths were of patients who had other serious, life-limiting health conditions, UW Hospital said.

Organ transplants can seem routine today, especially at UW Hospital, one of the nation’s largest transplant centers. But only a few decades ag…

If you resolve to meditate or exercise this year — and follow through — you might reduce your chance of getting a cold or the flu, according t…

Lab rats implanted with the device lost about a third of their body weight during testing.

Dr. Arjang Djamali, left, talks to Tim Nagel, of West Salem, after Nagel's kidney donation to his sister, in this photo from 2015. Djamali pla… 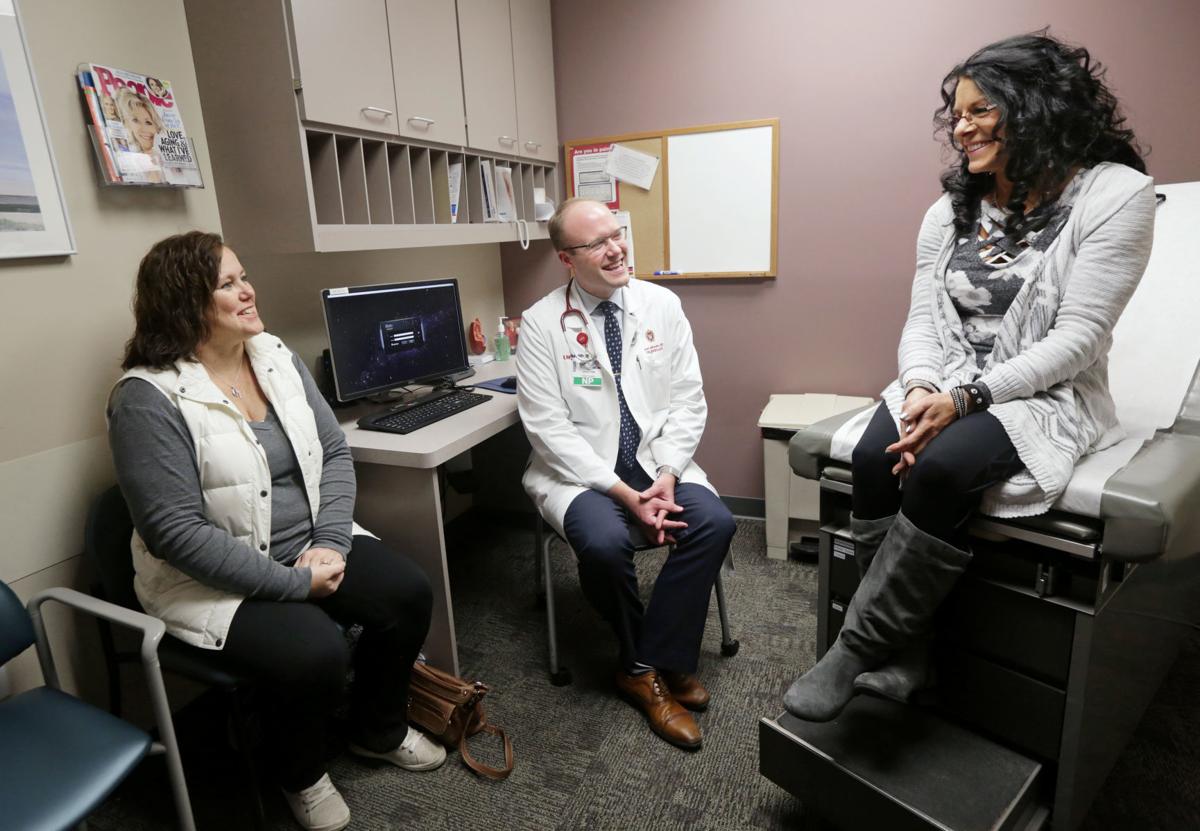 Brenda Quale, right, donated some of her immune cells, along with a kidney, to her sister Barb Okey, left, at UW Hospital last month. The hope is that Okey will permanently acquire part of Quale's immune system, which could let her avoid anti-rejection drugs, which are costly and have side effects. It was UW's first such kidney and immune system transplant. The sisters, from Platteville, talk with nurse practitioner Scot Johnson during a clinic visit at UW last week. 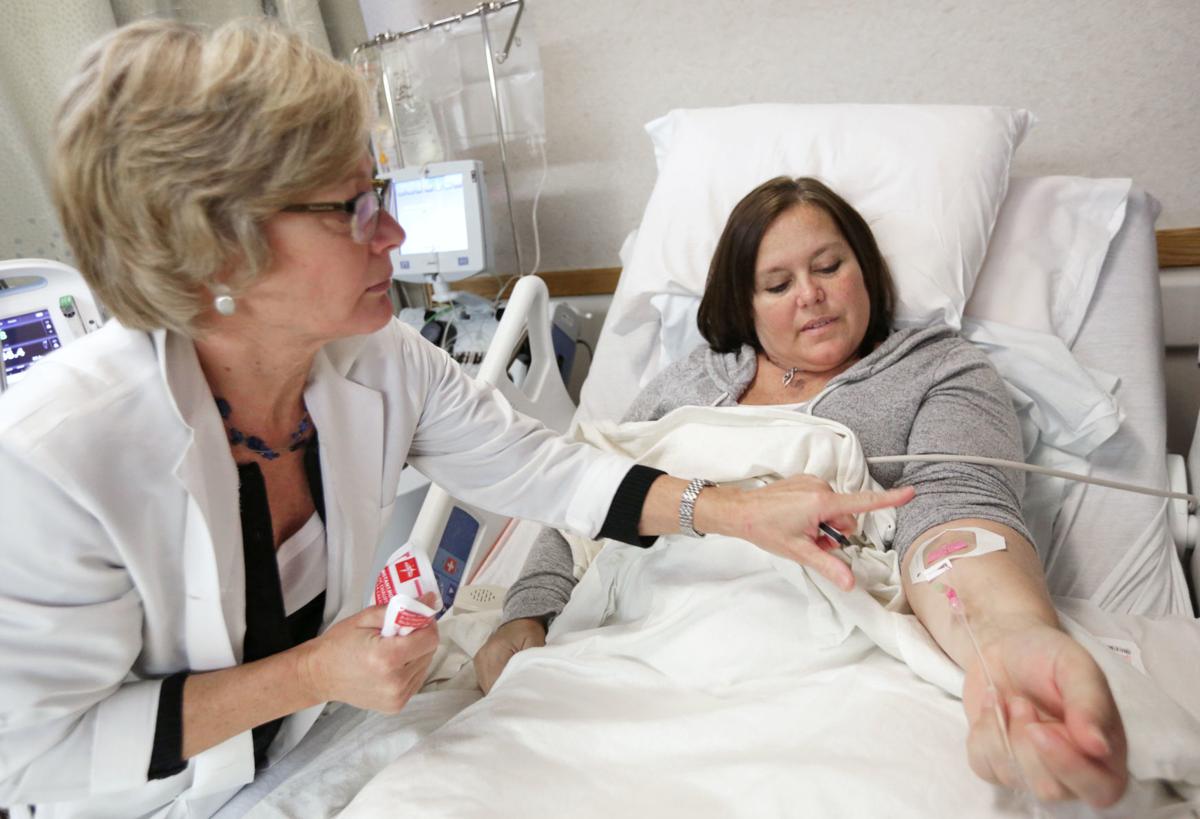 Barb Okey gets an infusion of blood stem cells donated by her sister, Brenda Quale, last month at UW Hospital, as nurse Janelle McMannes checks on her. Okey, who received a kidney from Quale in a transplant a week and a half earlier, received the immune cells so she could acquire a partial immune system from Quale. That could let her avoid lifelong anti-rejection drugs. 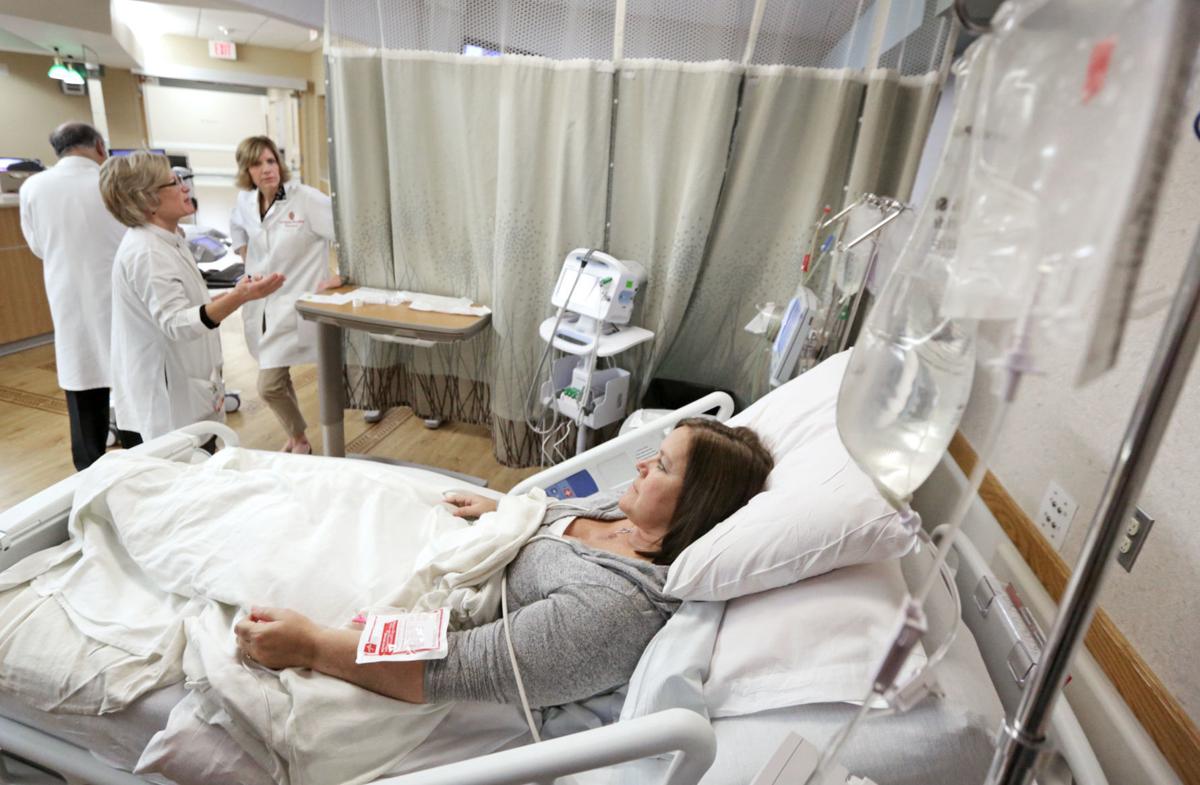 Barb Okey receives blood stem cells from her sister at UW Hospital on Nov. 16 after getting a kidney transplant from her on Nov. 5. It's part of a national study in which kidney recipients receive immune cells from their donors so the recipients can develop a "chimeric," or dual, immune system. 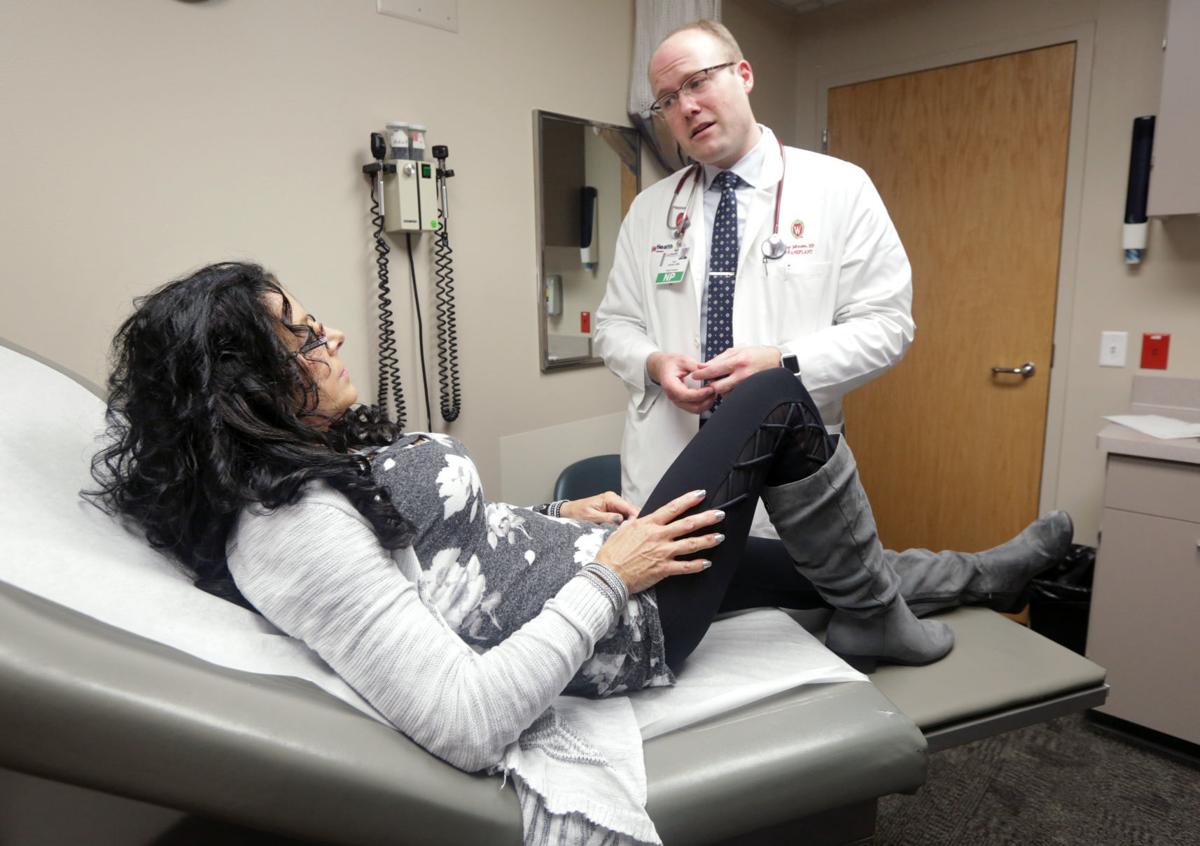 Brenda Quale, with nurse practitioner Scot Johnson at UW Hospital last week, said she had significant discomfort after donating a kidney to her sister in early November. But now she's feeling much better and has stopped taking pain medication, she said. 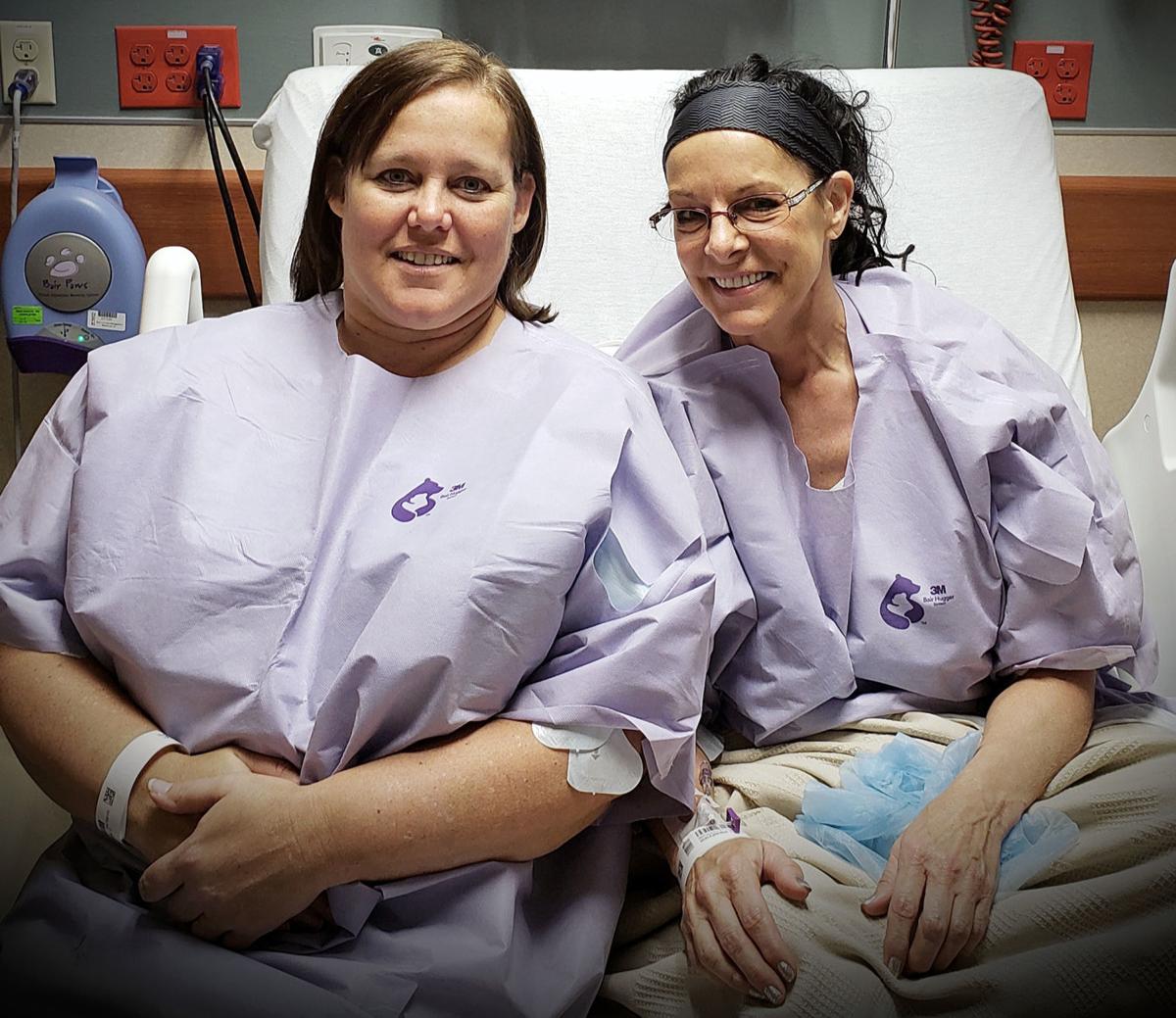 Barb Okey, left, and her sister, Brenda Quale, both of Platteville, are shown in early November while at UW Hospital for a kidney and immune system transplant. Quale, 54, donated her kidney and some of her blood stem cells to Okey, 48. Okey jokingly wonders if she might acquire some of her older sister's traits. "She likes the bling; I'm more sweat shirts and sweat pants," she said. "I hope it makes me skinny like her."