In his UW-Madison lab, Robert Kirchdoerfer studies proteins from six different types of coronaviruses, including SARS and MERS, which caused deadly human outbreaks in recent years.

Within two weeks, he expects to get proteins from the new coronavirus that emerged late last year in China, sickening at least 7,711 people, killing at least 170 and last week showing up in the United States.

Kirchdoerfer, who doesn’t work with whole viruses, studies protein sites shared among different strains of coronaviruses. “Our goal is to identify these sites and figure out how they work, and use those as targets to develop antiviral drugs,” he said.

As the new coronavirus outbreak continues to grow, mostly in China, state and campus experts in Madison are preparing for possible cases while cautioning against alarm. The new virus appears to be less deadly than SARS and MERS, and so far it presents much less of a threat in Wisconsin than seasonal flu, which has killed at least 23 people in the state since October.

“This is influenza season and there are many other viruses that also need to be taken into consideration,” Dr. Nasia Safdar, medical director of infection control at UW Hospital, said Wednesday at a panel discussion at the university about the new coronavirus.

Dr. Ryan Westergaard, chief medical officer for the state Department of Health Services, said Wisconsin has no cases of the new coronavirus. Of seven people in the state who traveled to China, developed symptoms and were tested, one was negative and results for six are pending. They are among 165 people tested nationwide, five of whom have tested positive, with 68 testing negative and results pending for 92, the Centers for Disease Control and Prevention said Wednesday.

“No news is good news,” Westergaard said. “But any one of these travel-associated cases could really change the nature of our response in the coming days.”

The state Laboratory of Hygiene, at UW-Madison, has been sending samples to the CDC for testing. Within two weeks, the state lab expects to be able to test samples on site, said Allen Bateman, an assistant director at the lab.

UW-Madison, with more than 40,000 students, many of whom travel internationally, is “prepared to react if things are changing,” said Dr. Patrick Kelly, interim medical director at University Health Services. A campus message about the new coronavirus issued late last week was translated into five languages.

With both the U.S. State Department and CDC discouraging travel to China, university-sponsored student travel to the country is now banned, UW-Madison Provost John Karl Scholz said in a campuswide email Wednesday.

There are hundreds of different coronaviruses that infect various species, from mammals and birds to reptiles, scientists say. With the emergence of the new coronavirus from China, seven coronaviruses are known to infect humans, Kirchdoerfer said.

Four human coronaviruses cause the common cold, accounting for about 30% of colds each year, said Kristen Bernard, a UW-Madison veterinary medicine professor.

The other three can cause more serious disease, with symptoms resembling influenza.

SARS, which caused an outbreak in 2003, and MERS, which emerged in 2012, originated in bats, said Christopher Olsen, a UW-Madison emeritus professor of veterinary medicine. The viruses are thought to have jumped to humans through intermediate species — for SARS, cats; for MERS, camels.

The new coronavirus appears to be structurally similar to SARS, though less deadly so far, and also is suspected to have come from bats, Kirchdoerfer said.

No drugs or vaccines are approved against human coronaviruses. Researchers are working on a vaccine against the new virus, with clinical trials possible as early as April. Whether the new outbreak will be a global pandemic by then or die out after several months, as SARS did, is impossible to predict.

“The next two to four weeks will really tell,” Olsen said.

An uptick in flu and respiratory syncytial virus cases leads to the first ban since 2009.

36,400 to 61,200 people are thought to have died from flu last year and more than half a million were hospitalized.

The family of Amy and Jocelyn Gannon, who were among the victims of a helicopter crash in Hawaii on Dec. 26, and a local nonprofit launched the fund Monday that will support women's empowerment and wildlife conservation.

Light snow, freezing drizzle possible in advance of a hint of spring to open February for south-central Wisconsin

With sunshine and temperatures reaching the 40s, Sunday could trigger some very early spring fever across the area, according to forecasters.

Of 15 people tested for the virus in Wisconsin, all have been negative except for a Dane County resident who last week was reported to have the virus, now called COVID-19.

It may be several days before the Dane County resident who tested positive for the new coronavirus from China is released from isolation, heal…

A new test for the new coronavirus that emerged in China late last year was developed by a Utah company using lab tools from Fitchburg-based Promega Corp., the companies said Tuesday.

Flu closes schools, leads to 'fist bumps' instead of handshaking at churches

Chancellor Rebecca Blank encouraged faculty to consider what meetings, classes and testing could be conducted online. 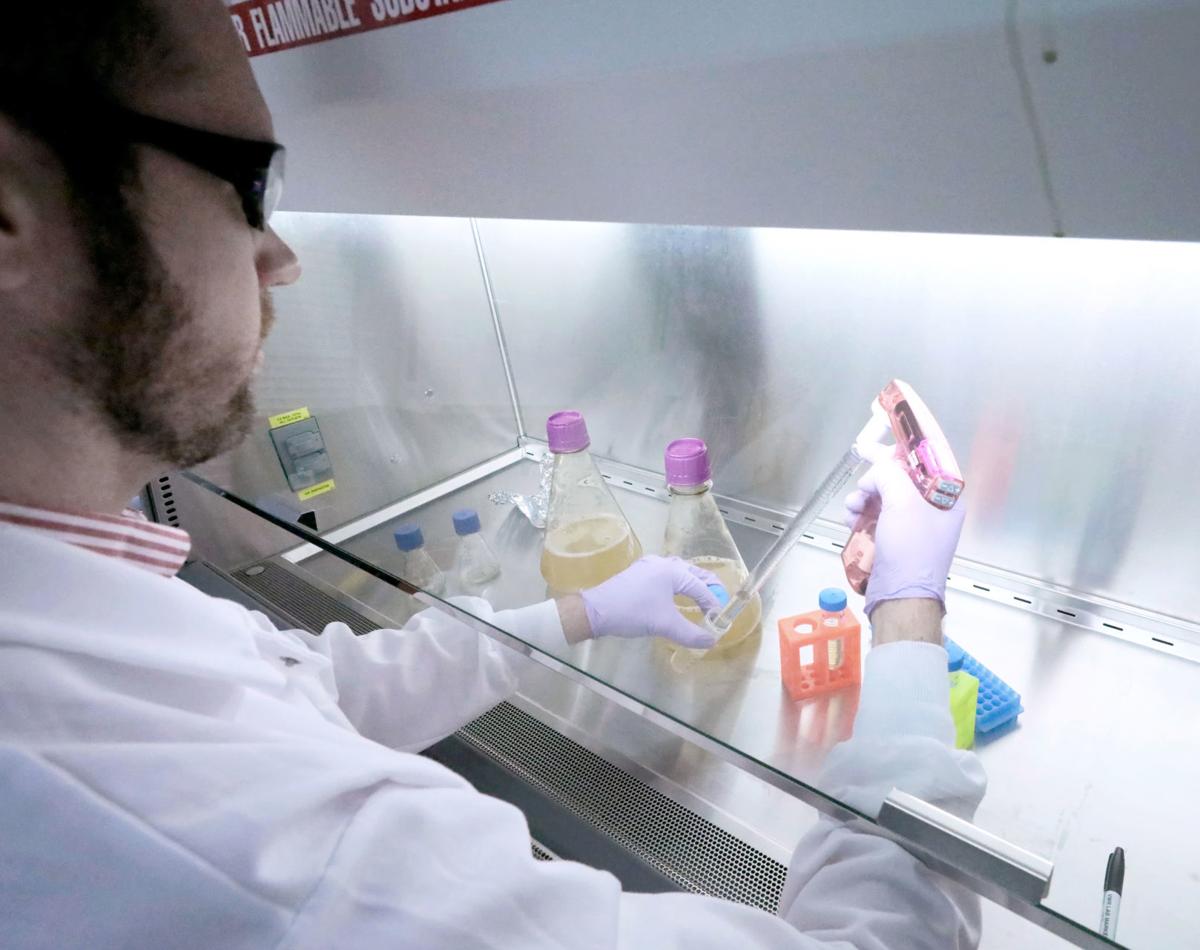 Robert Kirchdoerfer uses moth cells to study proteins from coronaviruses. A new cryo-electron microscopy center at UW-Madison will allow him to do more of his work on campus instead of having to travel to other locations. 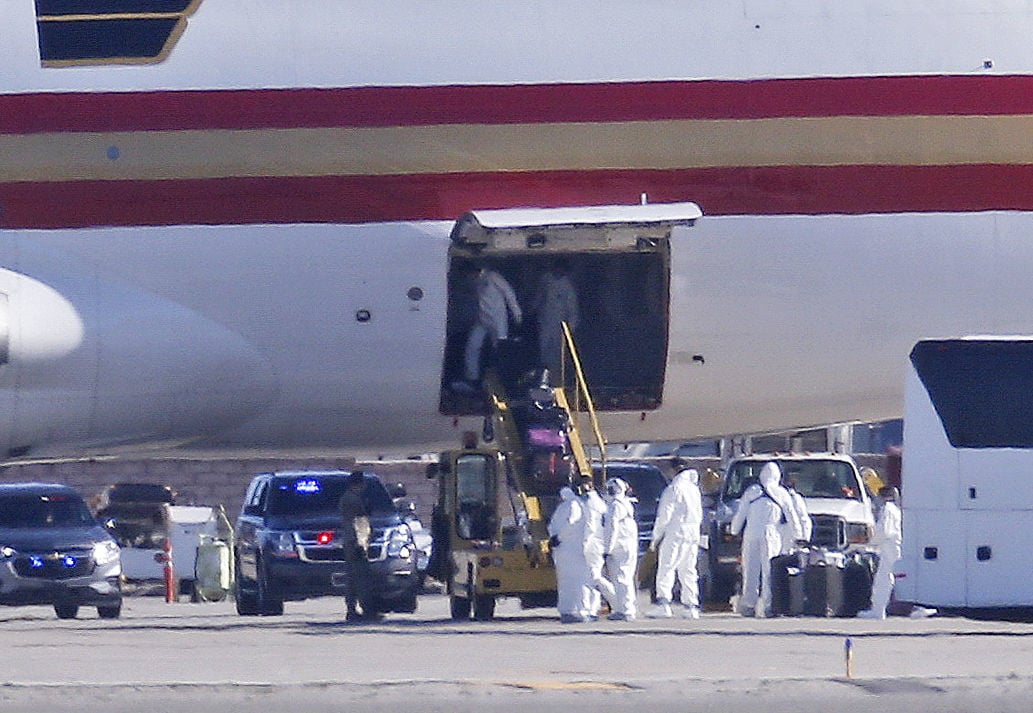 Personnel in protective clothing unload luggage Wednesday from the airplane carrying U.S. citizens being evacuated from Wuhan, China, at March Air Reserve Base in Riverside, Calif. 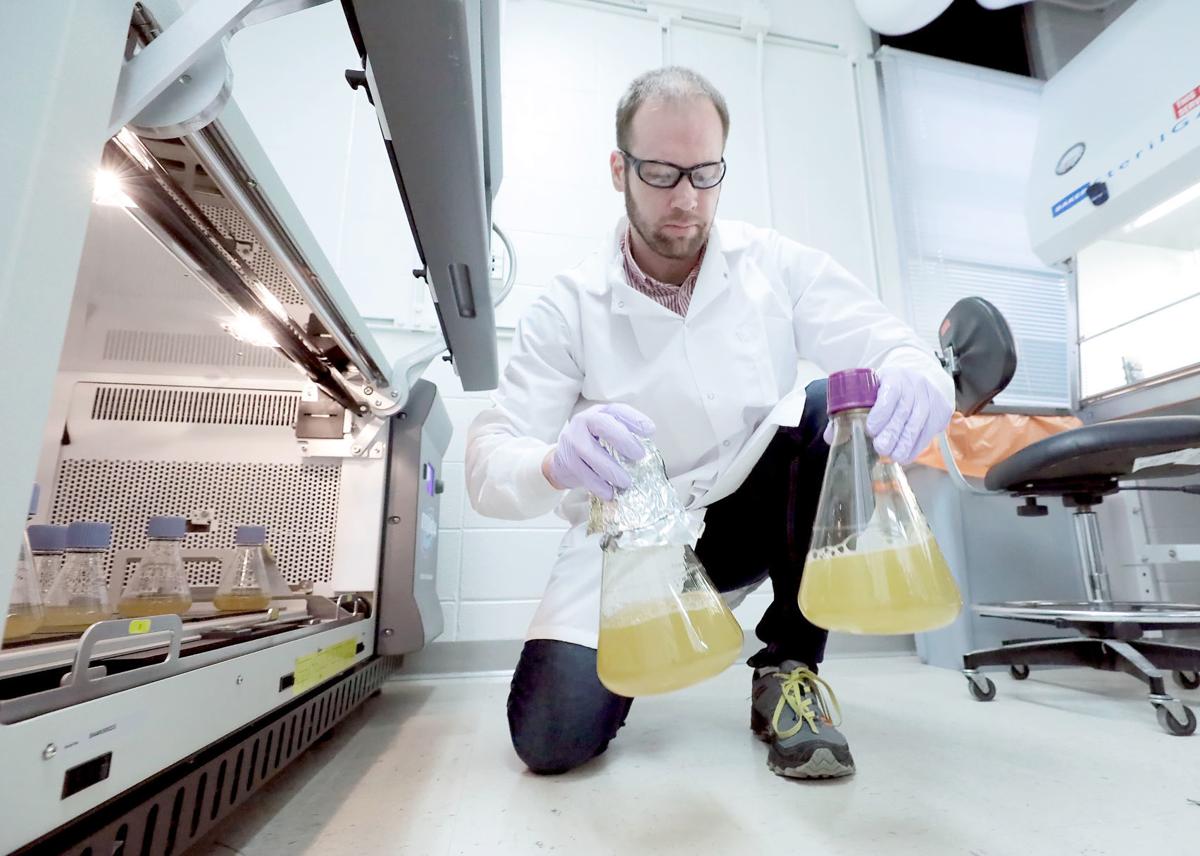 Robert Kirchdoerfer, an assistant professor of biochemistry at UW-Madison, uses flasks of moth cells to grow proteins from coronaviruses like the new virus in China that has caused an outbreak. In his lab on campus, Kirchdoerfer works with individual proteins of various coronaviruses, which have more than two dozen proteins. 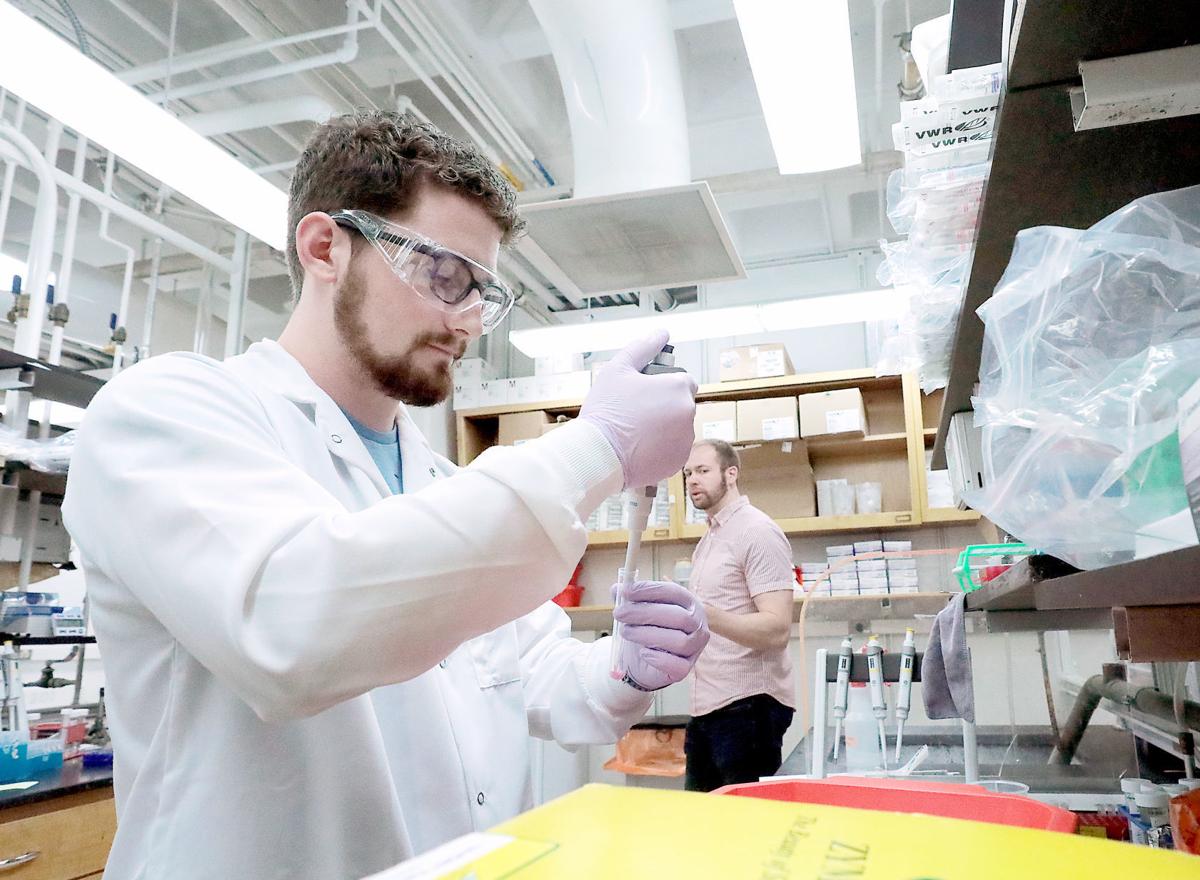 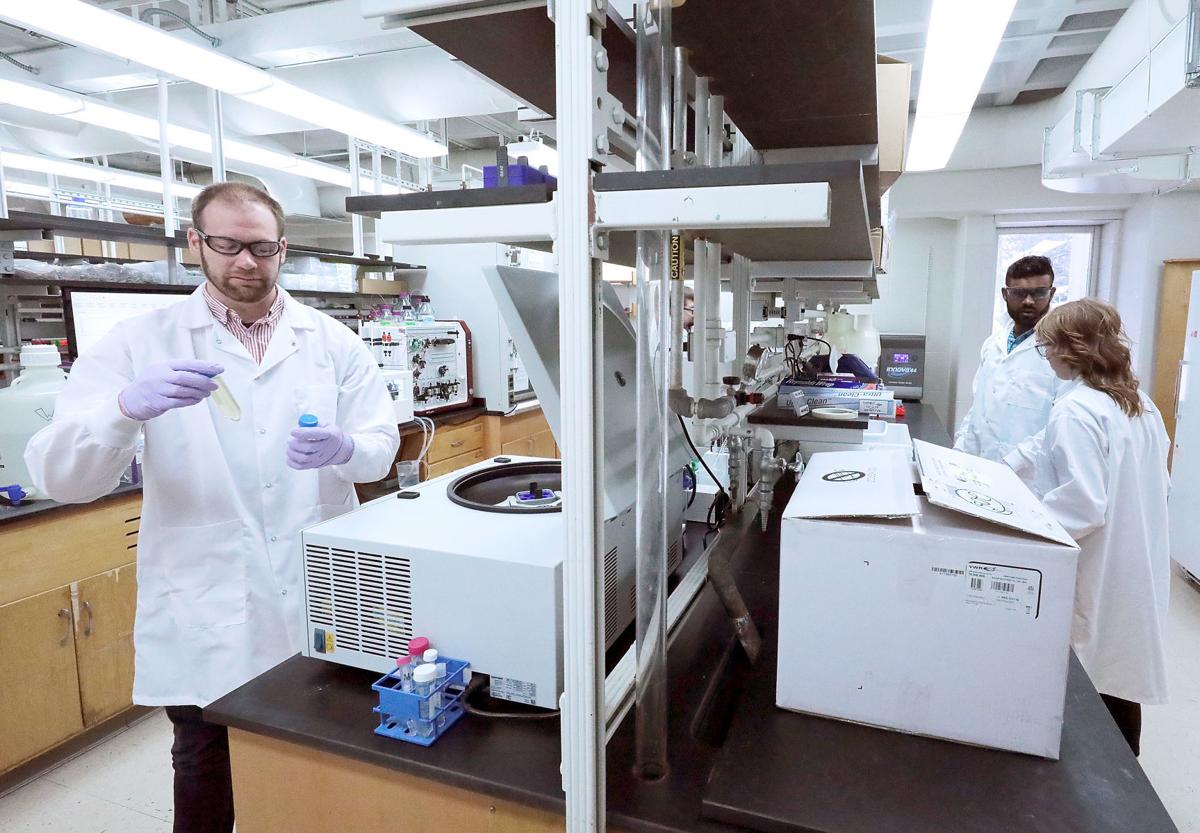 Robert Kirchdoerfer, left, uses a centrifuge to prepare moth cells for studies of coronavirus proteins. A 2006 graduate of UW-Madison from Oregon, Wis., he became an assistant professor of biochemistry last year.