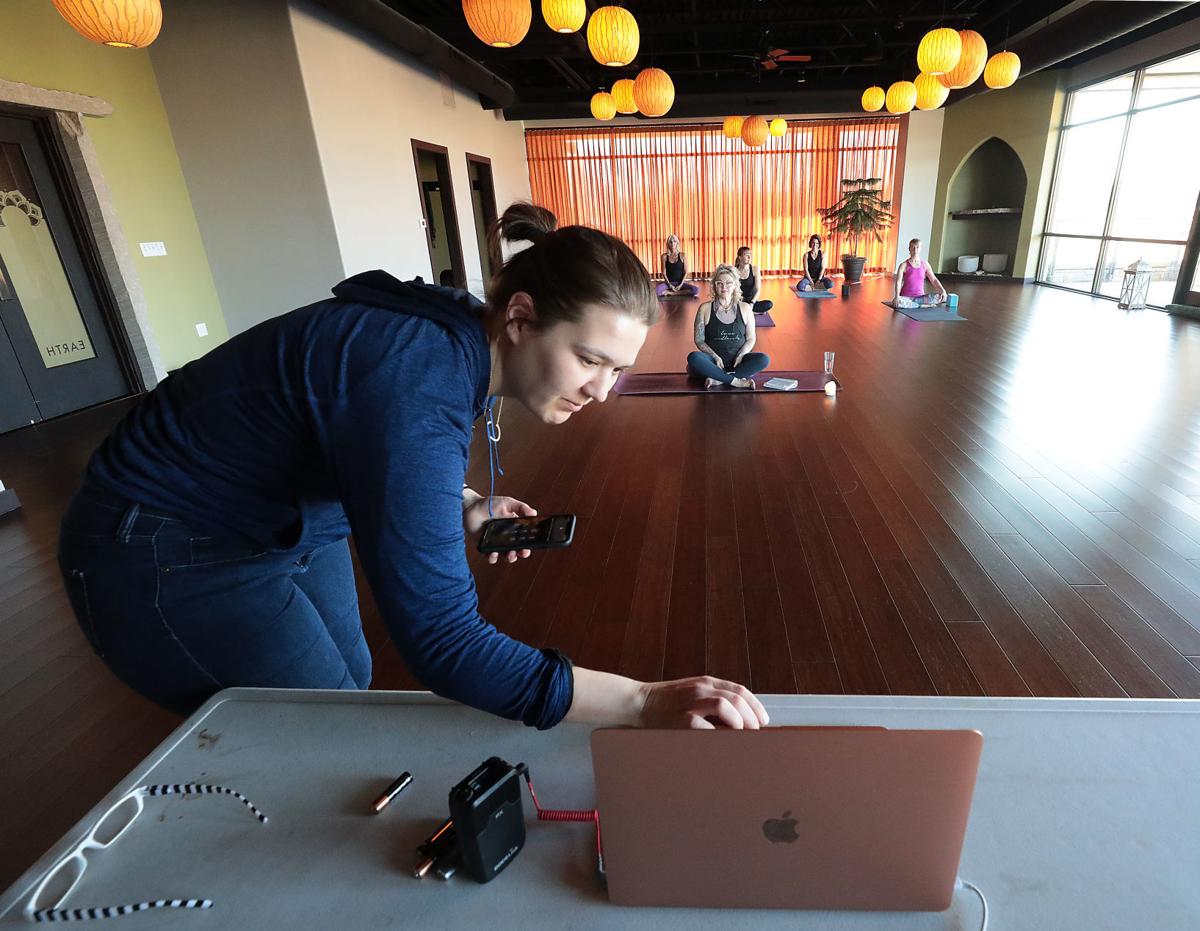 Clare Bornemann, studio manager of Perennial Yoga in Fitchburg, prepares to live stream a class last week. With in-studio classes now canceled due to the COVID-19 pandemic, Perennial has joined gyms and other fitness outlets with online offerings. 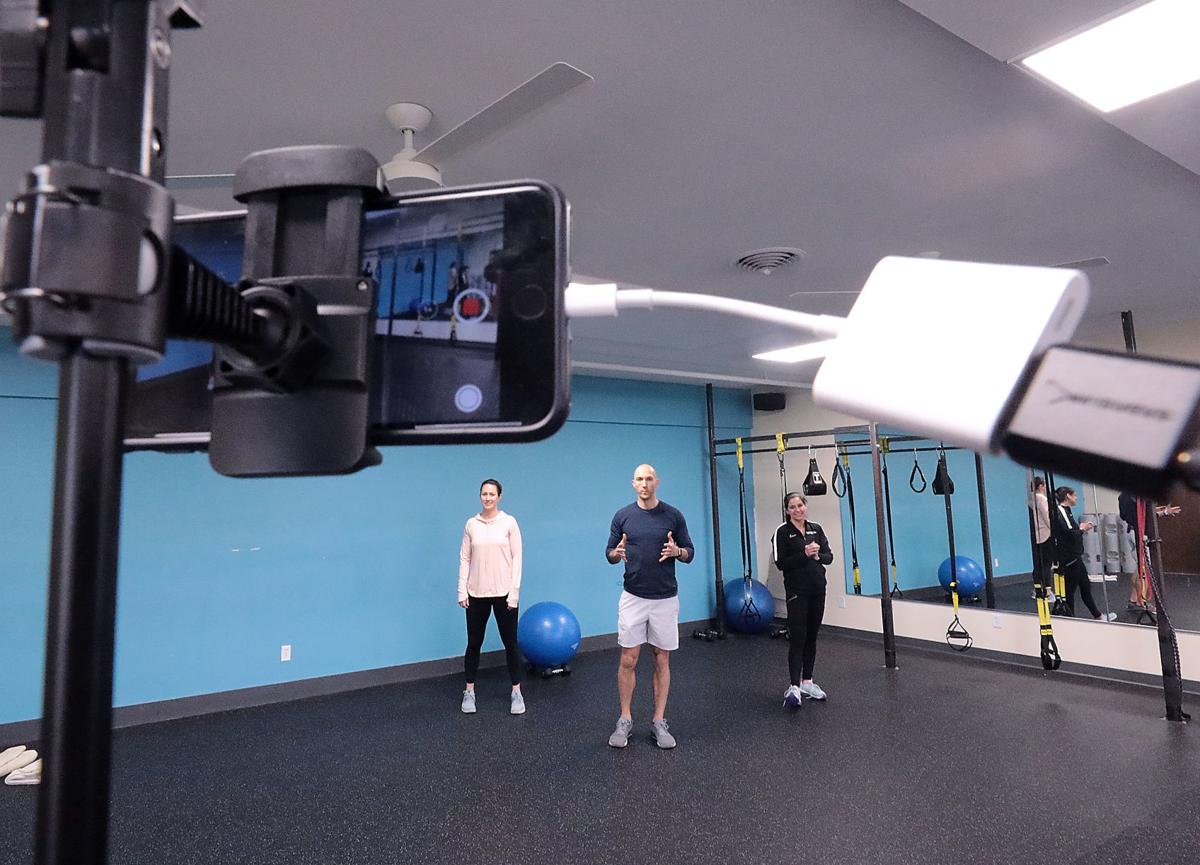 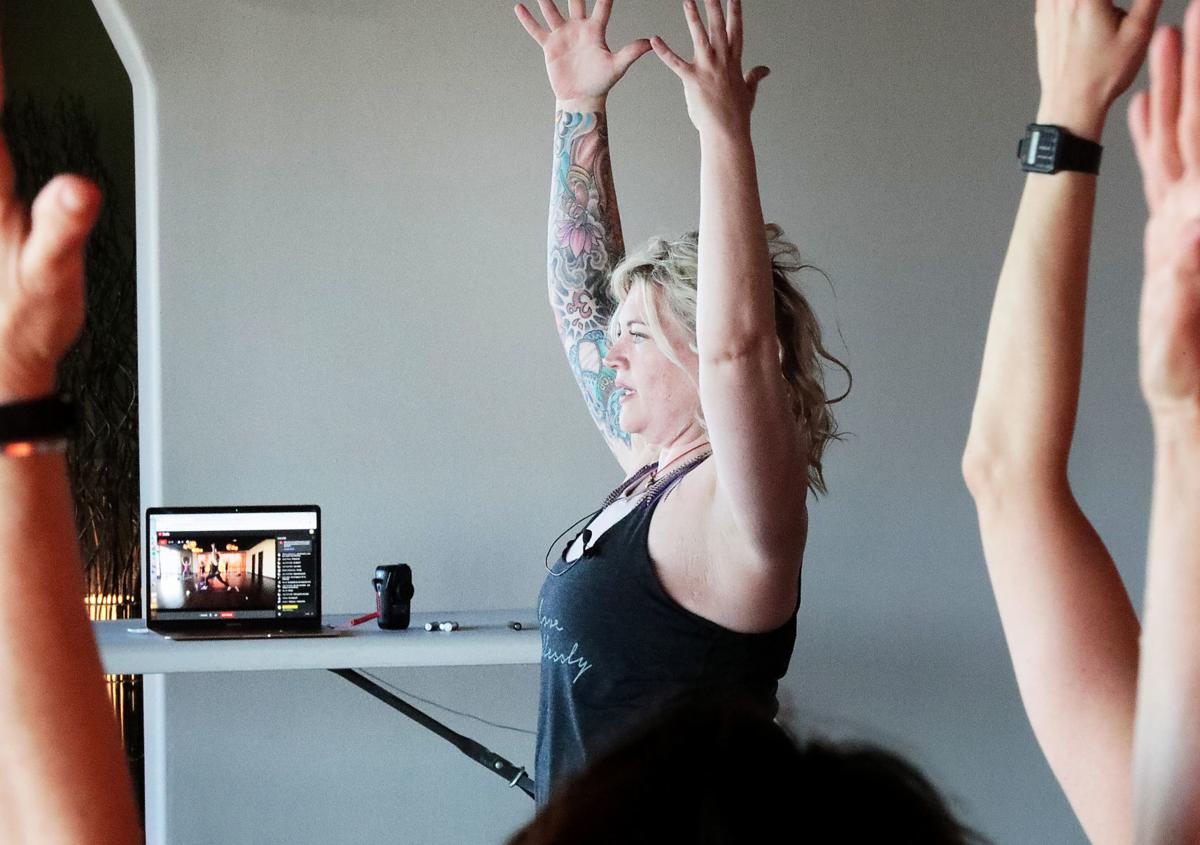 As a laptop computer live streams the session, Katie Hill guides a small class of participants last at Perennial Yoga in Fitchburg, which is now offering classes online only.

With gyms forced to close amid rapidly changing health guidance and restrictions on gatherings to slow the COVID-19 pandemic, people are finding innovative ways to maintain exercise routines in the face of unprecedented disruption.

Fitness centers and yoga studios, including Perennial Yoga with locations in Fitchburg and Madison, are using online video and conferencing platforms to keep members engaged and active, which health experts say is especially important in times like this. Others are grappling with hard choices about whether to continue running and biking in groups.

“Staying fit and healthy improves the capacity of the immune system to detect and destroy viruses,” said David Nieman, a professor of biology and director of the Human Performance Laboratory at Appalachian State University.

But experts also say social distancing is the only way to slow the progress of the new coronavirus that is now spreading rapidly in places like Dane County. Unchecked, the highly contagious respiratory infection could overwhelm the health care system.

Large fitness centers such as Pinnacle and Princeton Club have posted videos of trademarked workouts that members could do from home, while others scrambled to create custom content — all with the goal of helping people maintain their routines.

Across town at the Transformation Center, trainer Brent Berger led two instructors through a five-minute warm-up routine in front of an iPhone recording them in the otherwise empty studio.

“All right everybody, welcome to your warm-up at the Transformation Center online!” Berger said before directing his remote audience through a series of high knees, arm circles and lunges. The warm-up was to be spliced onto a series of workout routines the gym was launching.

“The goal is to get enough material for the first couple of days,” said Berger, who developed his digital fitness skills through a side joint health and mobility coaching practice.

“I didn’t expect that a hobby would become kind of an essential thing,” he said.

“Because we’re a small group, everyone knows each other. They’re missing that connection,” Maher said. “Everyone can see each other. You can hear the banter. Laughing or grunting or groaning — it’s more connective.”

Some smaller gyms remained open in spite of Tuesday’s statewide ban on gatherings of 10 or more people.

“We have always felt exercise is the best way to combat disease,” said Ford Sheridan, owner of Ford’s Gym, which is not taking on any new members during the outbreak.

Ford said many members are staying home, which has allowed diehards to continue working out while maintaining distance.

For runners and cyclists just getting a taste of spring weather, the pandemic response has sparked debates about whether to stick with the pack or break away.

Public health experts say exercising outdoors is safer than indoors, and you are less likely to infect yourself by touching contaminated surfaces.

“Outdoor activities are great because you’re not sitting in an enclosed space with other people where you can more easily transmit disease,” said Brian Labus, an assistant professor of public health at the University of Nevada-Las Vegas. “Running or bicycling alone would obviously give you the least contact with others, but it may not always be safe to do so.”

Movin’ Shoes manager Jered Sweeney-Demezas said the decision was made even before county and state officials banned gatherings of 10 people.

“It sat well with us,” he said, “because we knew we were making the right decision.”

Fleet Feet went a step further, closing its Middleton and Sun Prairie stores Monday until at least March 29. (The stores are taking orders by phone and online and offering free delivery or curbside pickup.)

Co-owner Jessica Anderson said it was a difficult decision since so many people turn to physical activity to cope with the stress of the pandemic, but with runs that draw 60 to 120 or more people, it was the right thing to do.

“People are meeting in smaller groups on their own,” she said. “I didn’t want to be responsible for those.”

USA Cycling on Wednesday canceled all sanctioned events through May 3 and urged athletes to forego group rides.

“It is evolving so quickly. All we can see is what’s happening overseas,” Jackie Hering, a professional triathlete and coach from Cottage Grove, said while riding a stationary bike in her basement. “Anything we can do to potentially prevent getting ourselves into that situation is worth doing.”

Health officials point out Wisconsin’s moratorium on gatherings of 10 or more people applies even to outside activities.

“While it may seem that it would be harmless since they’re outdoors, anyone with the virus — even if they’re asymptomatic — could sneeze, cough, or touch someone and spread it,” said Jennifer Miller, spokeswoman for the Department of Health Services.

“If it was a pack of ten or fewer and they rode six feet apart, maybe,” Miller said. “We certainly don’t want to discourage exercise, but during the health crisis, common sense needs to be the order of the day.”

Some types of events are exempt, but for most entertainment and sporting spectacles, the promoter is required to refund the admission price after a cancellation.

No customers will be disconnected from water, and the Madison Water Utility is freezing late fees to help families who need a financial break during the crisis.

As gyms reopen, are members ready to return?

More than two months after they were forced to close, Wisconsin gyms are preparing to reopen under strict infection control measures. But are people ready to return?

Clare Bornemann, studio manager of Perennial Yoga in Fitchburg, prepares to live stream a class last week. With in-studio classes now canceled due to the COVID-19 pandemic, Perennial has joined gyms and other fitness outlets with online offerings.

As a laptop computer live streams the session, Katie Hill guides a small class of participants last at Perennial Yoga in Fitchburg, which is now offering classes online only.