Like their first two children, Caiti and Ben Droessler’s daughter Piper, born in late November, looked healthy, with plump cheeks and a tuft of reddish hair.

A week later, the Droesslers learned Piper, unlike her siblings, had spinal muscular atrophy, a rare muscle-wasting disease. In its most severe form, SMA takes away the ability to walk, talk, swallow and breathe, often becoming fatal by age 2.

Wisconsin started testing newborns for the genetic disorder in October. Piper was the first to test positive, which allowed her to set a second milestone: In December, she became the state’s first child identified through screening to get a new gene therapy for SMA, before developing any sign of weakness.

By counteracting the condition before it took hold, the treatment is thought to be a cure, allowing her to live a normal life.

“The fact that we were able to catch it before there’s any loss of function is just amazing,” said Caiti Droessler, 32, of Platteville.

“Her strength and tone and recoil are all what I would expect,” Dr. Jennifer Kwon, a UW Health pediatric neurologist overseeing Piper’s care, said this month while examining her during a checkup. “The expectation is that she will continue to function normally.”

The gene therapy, an intravenous infusion called Zolgensma, was approved by the Food and Drug Administration in May. At $2.1 million, it is believed to be the drug market’s most expensive one-time treatment.

Concerns about the cost grew in August, when the FDA said manufacturer Novartis manipulated data involving tests on mice and waited until after approval to report the problem. The FDA said it was investigating but the findings “do not change the agency’s positive assessment” of the drug’s human trials.

Zolgensma’s $2.1 million price “is no more ludicrous than paying more than $1,000 a month to rent a portable ventilator, especially when that one treatment will likely eliminate the need for the ventilator and many other costs associated with SMA care,” Nathan Yates, a financial consultant who has SMA, wrote for the biomedical news website STAT.

At UW Health, about 40 SMA patients have been treated with Spinraza and 11 have received Zolgensma, including three during clinical trials and two in a special access program prior to approval, Kwon said.

About 1 in 11,000 babies is born with the SMA, or fewer than 400 a year nationwide. If both parents are carriers, as the Droesslers learned they are, there’s a 25% chance each child will have it.

The condition is caused by a mutation in a gene that normally makes a protein needed by nerve cells that control muscles. Without the protein, the nerve cells die and people lose the ability to move.

Spinraza helps a related gene make more of the protein. Zolgensma replaces the mutated gene with a normal one, restoring regular protein production.

Any weakness developed before Zolgensma is given isn’t reversed, but the drug is expected to prevent additional problems, Kwon said. If given shortly after birth, before any symptoms develop, the treatment is considered a cure, she said.

However, there is no proof the gene therapy will be long-lasting; the oldest children to receive the drug are five years old, and doing well. “We have the theoretical expectation that they will have normal motor function for their lifetime,” Kwon said.

The availability of the treatments has led 16 states to add SMA to their newborn screening programs, according to Cure SMA. Another 15 states have approved doing so.

Wisconsin added SMA to its program Oct. 15. Through blood collected from heel pricks before babies leave the hospital, the state now tests for 47 conditions, many of which can be offset with special diets or medications.

“Without family history, newborn screening is the only way we can find (SMA) before symptoms appear,” said Dr. Mei Baker, co-director of the newborn screening lab at UW-Madison's Wisconsin State Laboratory of Hygiene.

Four to six cases of SMA are expected in Wisconsin each year, Baker said.

So far, Piper Droessler remains the only baby to test positive through screening.

Caiti and Ben Droessler's 6-year-old daughter and 3-year-old son don’t have SMA, and the couple had never heard of the condition. Caiti works at Southwest Health in Platteville, in human resources. Ben runs a masonry restoration business with his dad and brother.

A week after Piper was born Nov. 25, they got a call that she had SMA.

“It was very scary, one of those phone calls you never want to get,” Caiti Droessler said.

The next day, they met with Kwon in Madison and decided to try Zolgensma as quickly as possible. Their health insurance, Quartz, approved and Piper received the hour-long infusion at UnityPoint Health-Meriter on Dec. 18.

The couple is thankful for the fortunate circumstances. If Piper had come six weeks earlier — or in a state without SMA screening — they would not have known about the disorder in advance.

“By the time we found, she would have already presented with weakness, and at that point, the damage is done,” Caiti Droessler said. “I feel very blessed that we were given this opportunity to keep her well.” 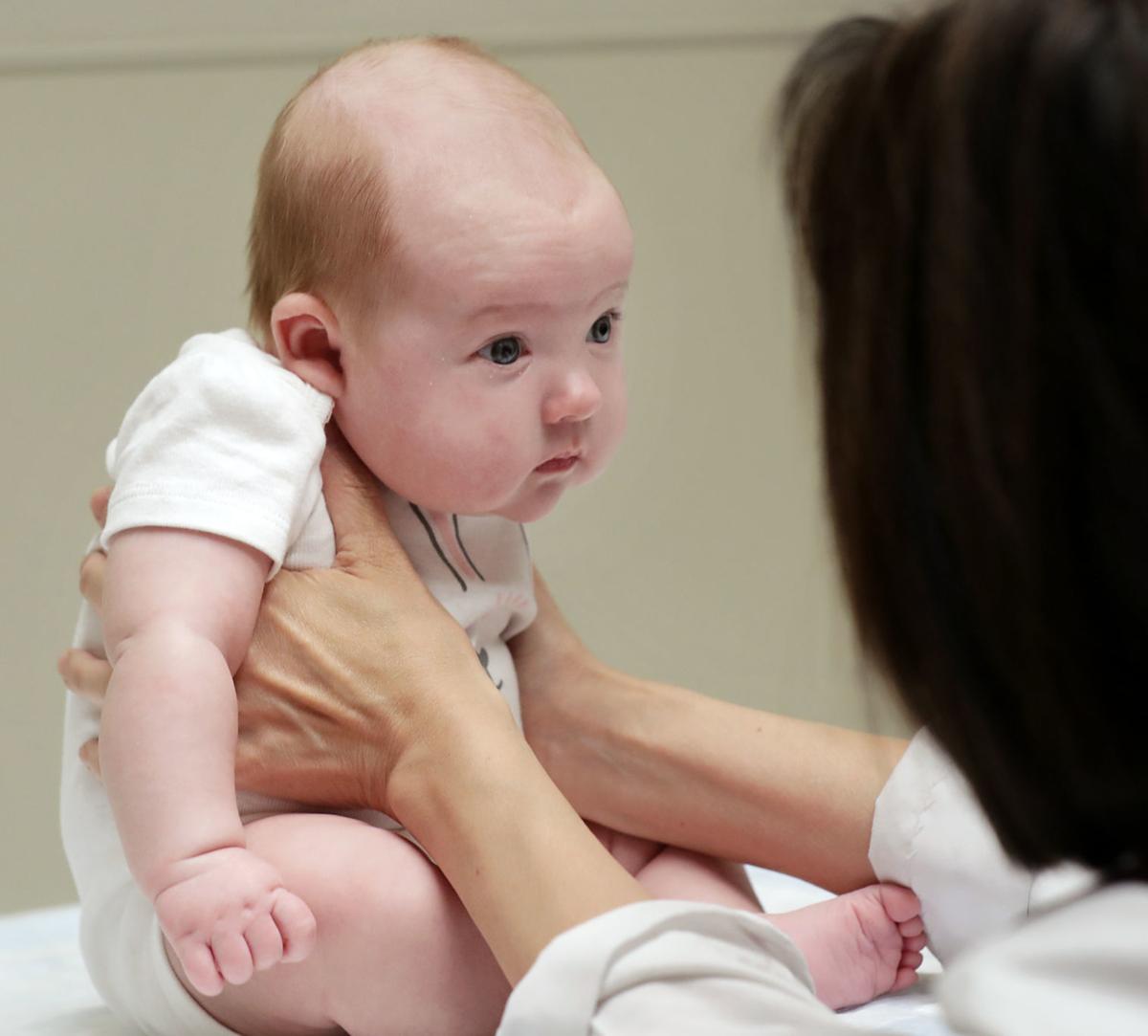 Piper gets a checkup at UW Hospital in January at 7 weeks old. “The expectation is that she will continue to function normally,” said Dr. Jennifer Kwon, a pediatric neurologist overseeing Piper's care. 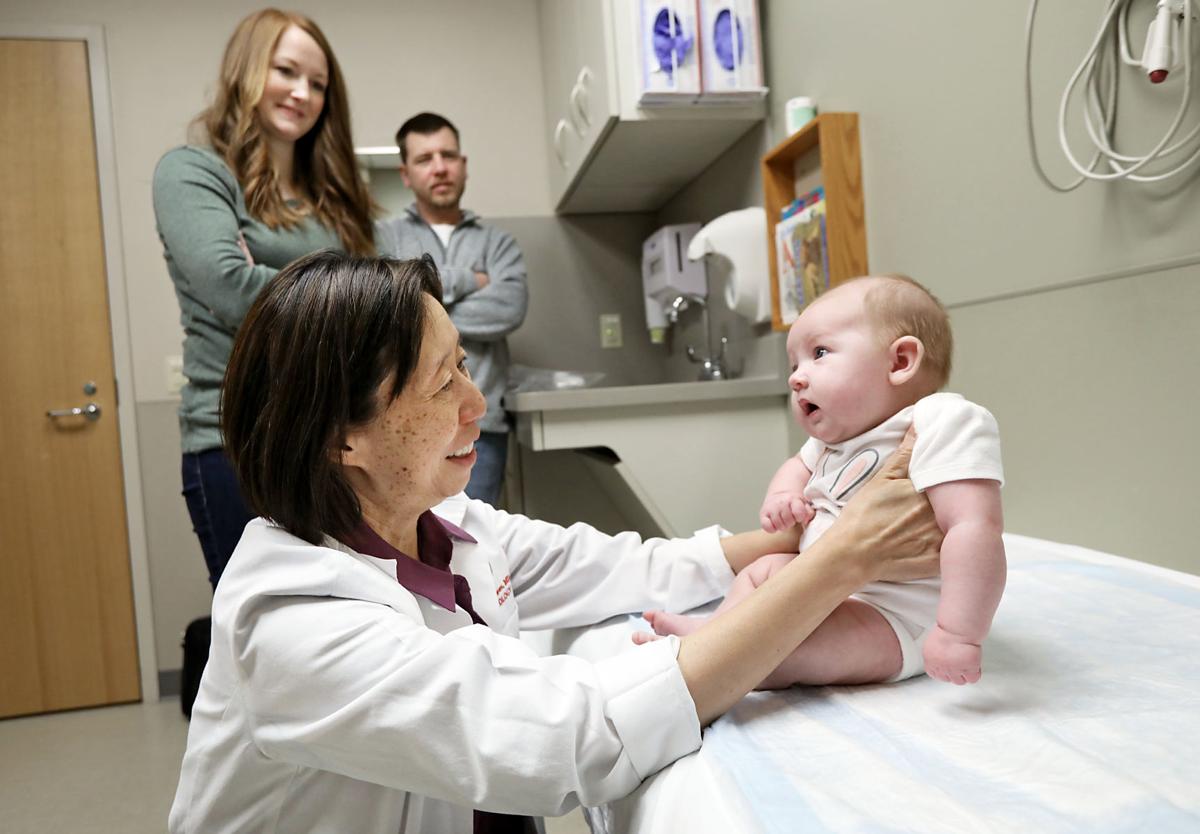 Dr. Jennifer Kwon, a pediatric neurologist at UW Health, tests Piper Droessler's strength. Born to Caiti and Ben Droessler (background), the Platteville baby was the first child in Wisconsin identified through newborn screening to have spinal muscular atrophy, a potentially fatal muscle-wasting disease. She was also the state's first such baby to receive a gene therapy thought to be a cure. 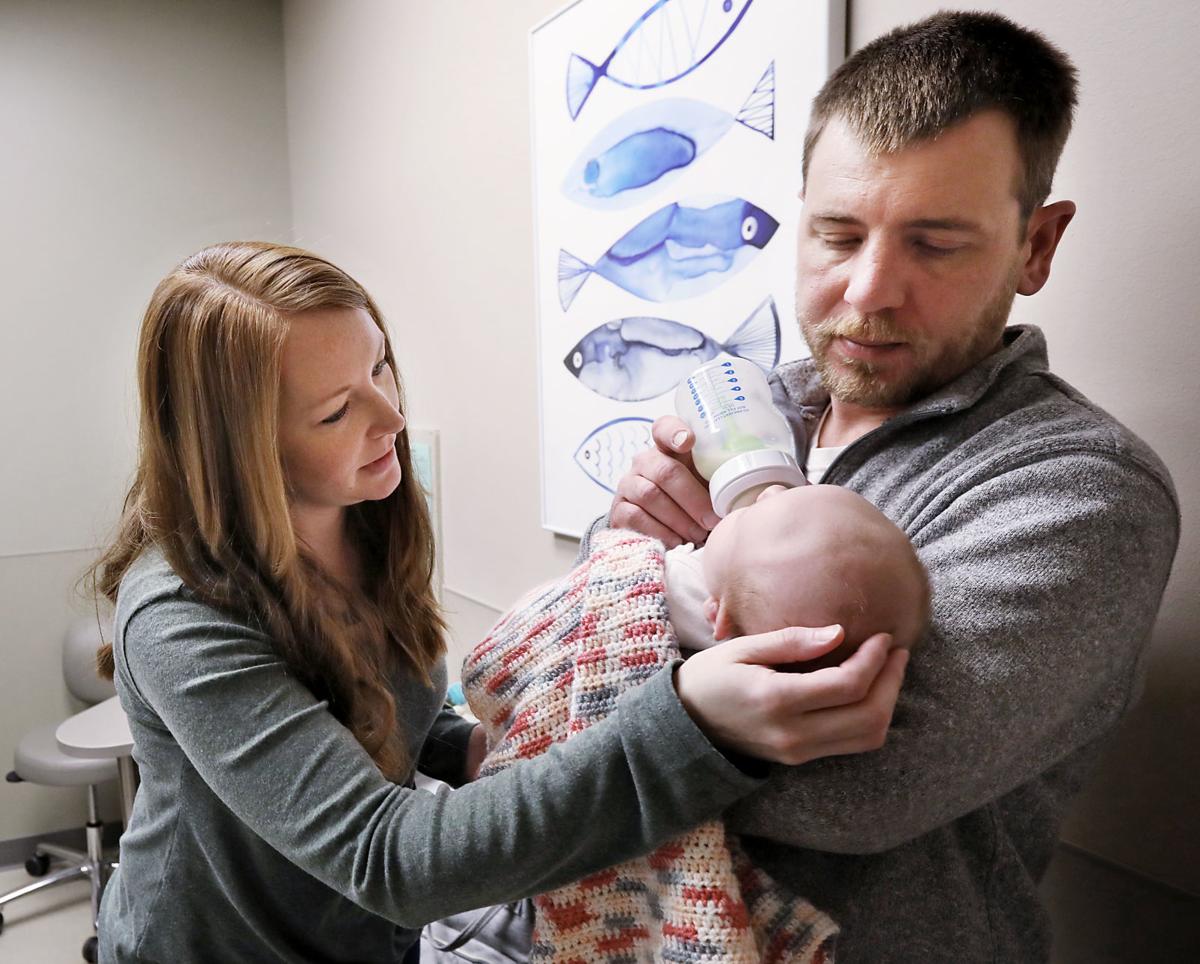 Caiti and Ben Droessler, of Platteville, had never heard of spinal muscular atrophy, a potentially fatal muscle-wasting disease, until they learned a week after the Nov. 25 birth of their daughter, Piper, that she tested positive for it. She received a gene therapy that is expected to prevent the condition. 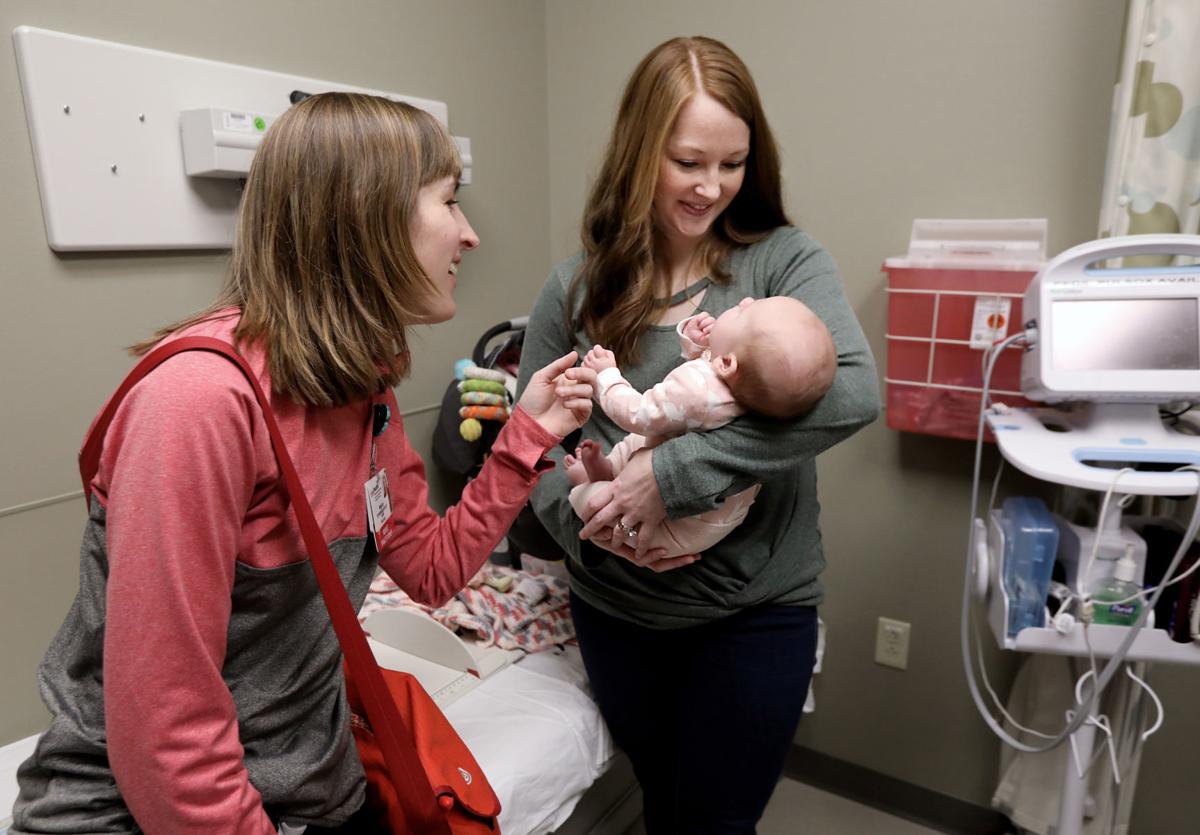 Piper, with her mom, Caiti Droessler, and nurse practitioner Meghan Furstenberg-Knauff, is one of 11 children at UW Health to receive Zolgensma, a $2.1 million gene therapy for spinal muscular atrophy. 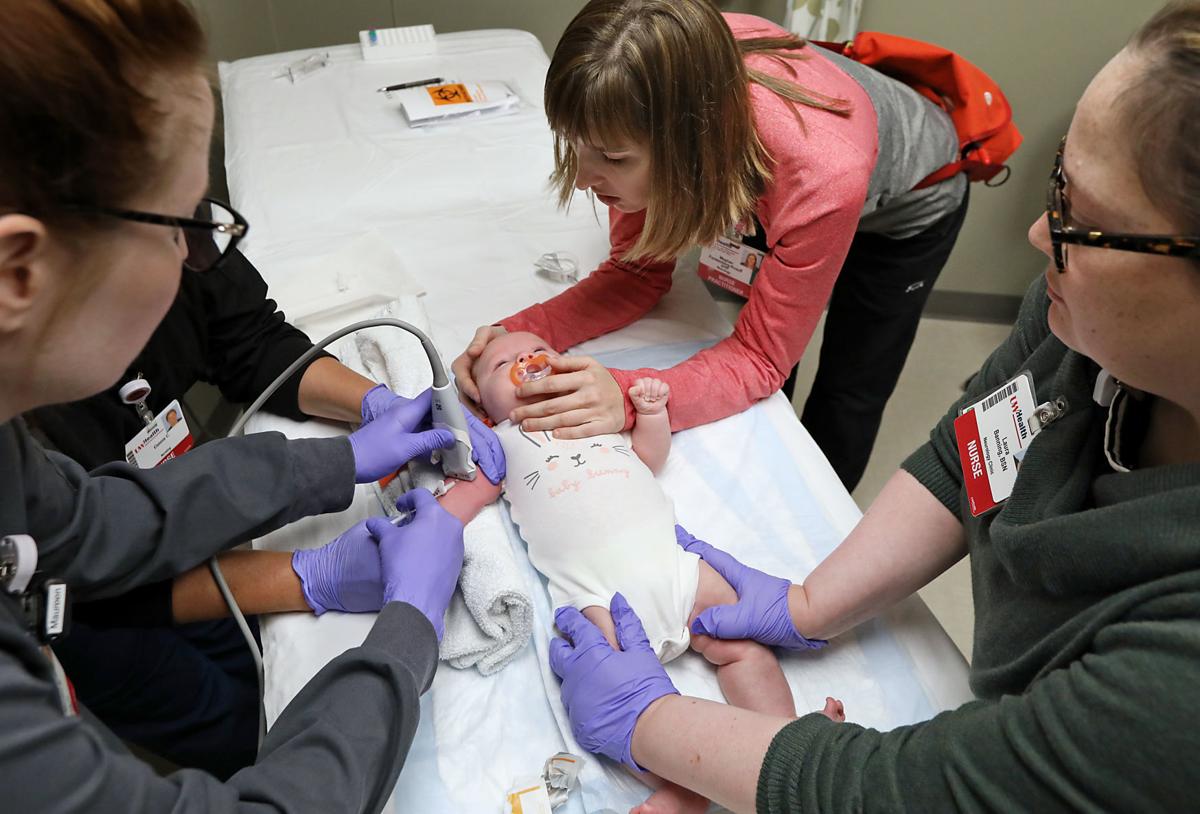 UW Hospital staff draw some of Piper's blood. She was later weaned off steroids after receiving a new gene therapy to prevent SMA.