From swishing hydrogen peroxide rinse to having hygienists remove plaque by hand instead of with an ultrasound tool, patients returning to dental offices are seeing many changes because of COVID-19.

The World Health Organization said this month that routine dental care should continue to be delayed until COVID-19 transmission drops further. But the Wisconsin Dental Association and many Madison-area dentists say clinics are taking multiple steps to make dental care safe.

Most dental practices around the country closed for all but emergency procedures in mid-March as the coronavirus outbreak grew. Many reopened in May or early June, with 99% offering routine care again by late July, when patient volume was at 73% of pre-pandemic levels, according to the American Dental Association.

Most clinics have implemented new steps recommended by the American Dental Association and the Centers for Disease Control and Prevention.

Patients generally must answer several questions before their visit to check for symptoms of COVID-19, their exposure to it and their risk of complications if they get it. When they arrive, they have to wear a mask and call from their vehicles before entering and being screened again, including with a temperature check.

Once in the dental chair, patients are often asked to rinse with a hydrogen peroxide solution and put on safety glasses. Hygienists and dentists often wear surgical masks over N95 masks and face shields, gowns and caps, along with disposable gloves as before.

Hygienists have mostly stopped using ultrasound tools to clean teeth because the process releases aerosols, tiny liquid droplets in the air that could spread the virus. Some are polishing teeth differently or skipping it. For procedures such as fillings and crowns, many dentists are using special suction devices and dental dams — sheets of rubber that cover the mouth except for the teeth being worked on — also to reduce aerosols.

“A dental dam, coupled with high-speed suction, drastically cuts down on the aerosols,” said Dr. Patrick Tepe, with Associated Dentists in Verona, who is now using dental dams for fillings in addition to root canals as before.

Like some other dentists, Dr. Tamim Sifri, of Smart Dental on Madison’s North Side, has added a new air purification system to his office and now allows 10 to 15 minutes of “settling time” in rooms after procedures that can produce aerosols.

“When you’re dealing with aerosols, there’s spatter. It’s not just what you can see. There’s a lot that you can’t see,” Sifri said.

Some practices, such as Madison No Fear Dentistry, explain online the steps they are taking. The clinic has started using hypochlorous acid as a disinfectant, sometimes in a fogger throughout a room, and added an ionization system to better clean the air, said Dr. David Ducommun. “We just don’t see the dust in the air anymore,” he said.

Dr. Benjamin Farrow, of Monroe Street Family Dental in Madison, said dentists have always been “meticulous” about infection control. “A dental office is in a lot of ways cleaner than most of our houses and other places we visit,” he said.

Farrow’s clinic has taken a step many offices haven’t. Hygienists have stopped polishing teeth, which allows them to forgo wearing N95 masks, though they still use surgical masks and face shields, he said.

Farrow is also using silver diamine fluoride, an antimicrobial liquid brushed on cavities to neutralize tooth decay, a bit more as a temporary alternative to fillings, especially on older adults at greater risk for COVID-19.

Dr. Chris Kammer, a longtime Madison-area dentist, recently opened a “no-drill dentistry” practice in Middleton, called Victorious Dental. He started working on the concept long before the pandemic, but said its avoidance of aerosols is “very timely” and “fits perfectly” with the need to minimize the risk of COVID-19.

Other changes patients might notice at dental clinics are a lack of chairs or magazines in waiting rooms and the addition of acrylic barriers around reception desks. Many clinics are requiring patients to sign consent forms acknowledging risks of COVID-19, and some are charging an extra $20 — which some insurance plans may cover — for the additional costs of protective equipment and other coronavirus-related supplies.

Some changes may become permanent, as gloves did after HIV emerged in the 1980s. “I don’t see face shields going away in dentistry,” Sifri said.

Many dental hygienists were worried about returning to work in the spring, when the supply of N95 masks, face shields and other protective equipment was often in question. Matt Crespin, a hygienist from Milwaukee who until June was president of the American Dental Hygienists’ Association, said some hygienists retired early or haven’t returned to work. But most are back on the job.

“The vast majority of dental hygienists do feel safe,” said Crespin, associate director of the Children’s Health Alliance of Wisconsin.

It helped that the CDC this month updated its COVID-19 guidance for dental clinics to more clearly recommend N95 masks during aerosol-generating procedures and to specify the kind of safety glasses providers should wear, Crespin said.

Protective equipment is more available now, but some items, such as gowns, can still be scarce. “They’re still a little bit difficult to find,” said Turner, of First Choice Dental.

The WHO recommended that “routine non-essential oral health care — which usually includes oral health check-ups, dental cleanings and preventive care — be delayed until there has been sufficient reduction in COVID-19 transmission rates from community transmission to cluster cases or according to official recommendations at national, sub-national or local level.”

Dr. Chad Gehani, president of the American Dental Association, said in a statement responding to the WHO guidance: “Dentistry is essential health care because of its role in evaluating, diagnosing, preventing or treating oral diseases, which can affect systemic health.”

Sifri, of Smart Dental, agreed, saying preventive dental care can stave off problems. He had a visit this week with an 11-month-old boy and his mother, to talk about diet and home care that can prevent cavities.

“To delay that until the end of the pandemic I think would really be harmful,” he said.

Statewide, emergency departments reported 325 suspected opioid overdoses in March through mid-July, more than double the 150 seen during the same period in 2019.

A new federal advisory board’s rejection of nearly all research proposals it reviewed involving fetal tissue has reignited the debate over such research, which opponents have tried several times to ban in Wisconsin.

Prevention against flu could preserve health system capacity for people sickened by the coronavirus, doctors say.

The utility board voted unanimously Tuesday to postpone a review of the practice that was started in 1948 as a way to prevent tooth decay until the completion of a U.S. Health and Human Services review.

The county will require face masks to prevent spread of COVID-19 if state order doesn't extend after Sept. 28.

Hospital and other medical treatment for COVID-19 costs $14,573 per patient on average and coronavirus testing is about $102 per sample, according to a new report focusing on Wisconsin by Madison-based M3 Insurance. 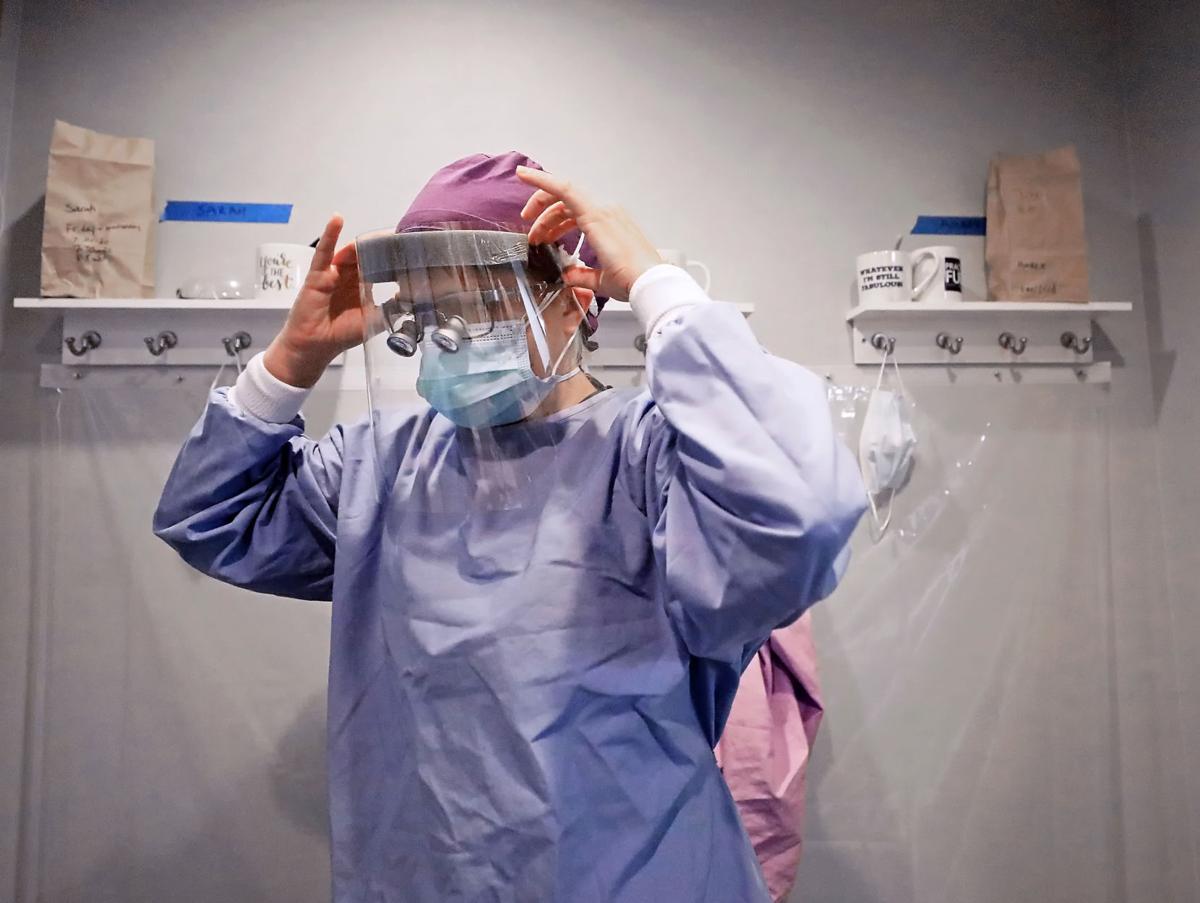 In a room that formerly served as a patient consultation area, Smart Dental hygienist Sarah Seng dons personal protective equipment before meeting with a patient. Dentists in Madison and elsewhere say they are taking many steps to reduce the spread of COVID-19. 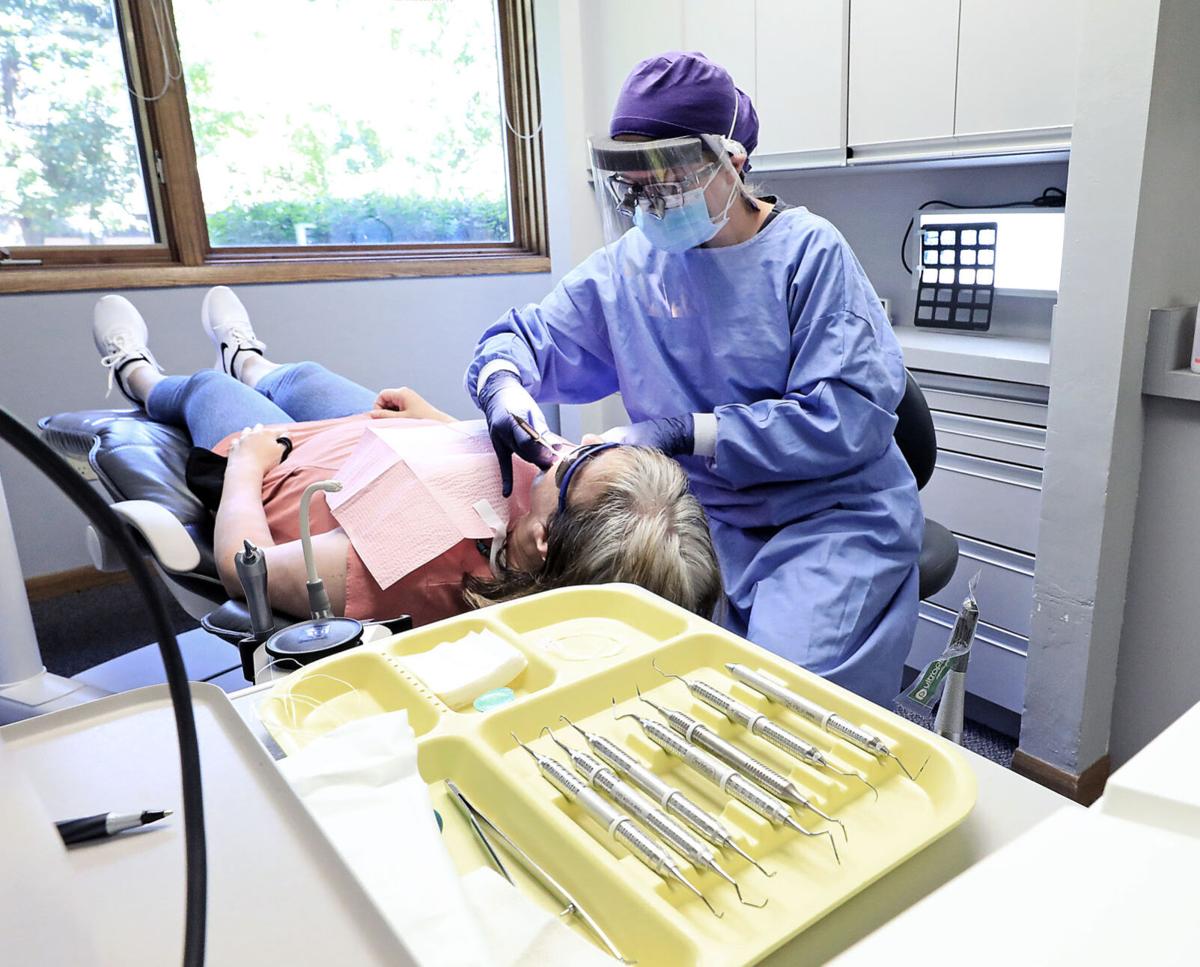 Smart Dental hygienist Sarah Seng cleans Shari Bernstein's teeth. Most hygienists are removing tartar by hand with scaling tools instead of using ultrasound tools, which can cause aerosols, tiny droplets in the air that can spread COVID-19. 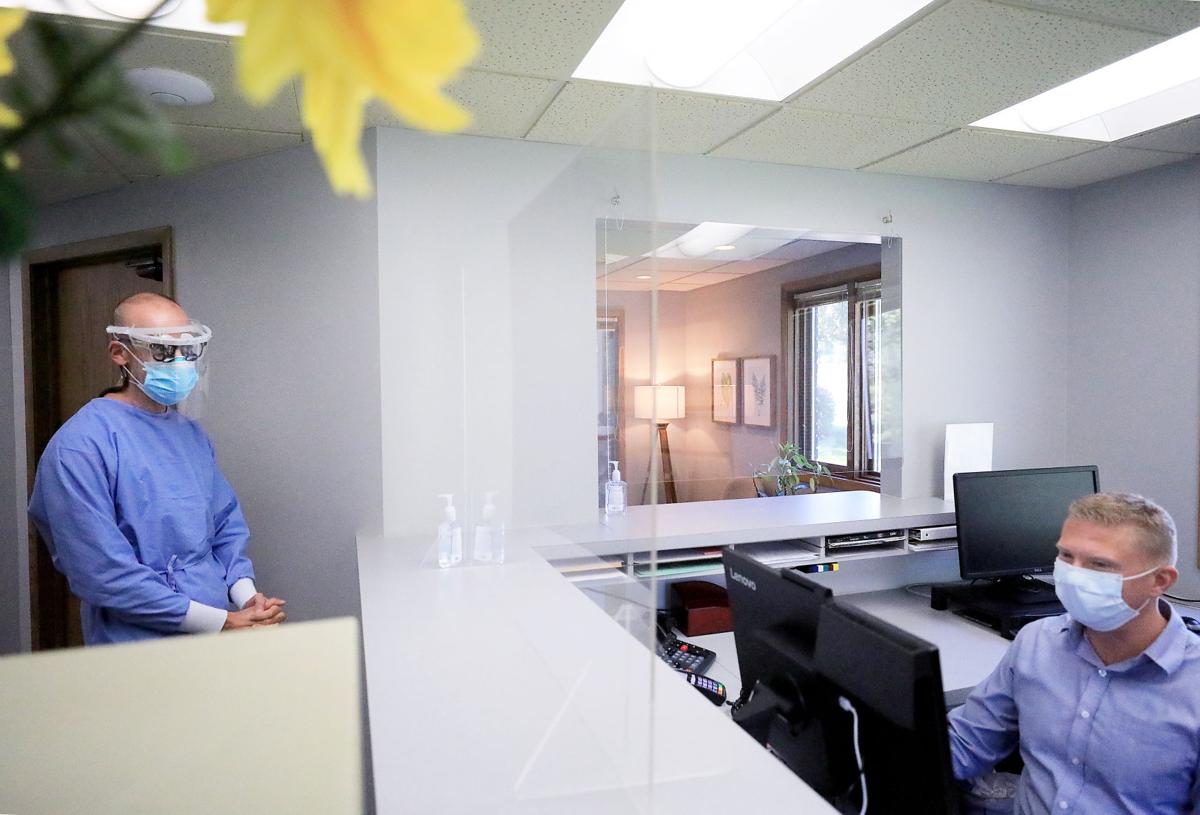 An acrylic panel separates Dr. Tamim Sifri, left, and office manager Shane Alme in the reception area at Smart Dental. Like many other dental clinics, Smart Dental asks patients to sign consent forms about the risks of COVID-19, even though dentists and hygienists are taking many steps to reduce the risk. 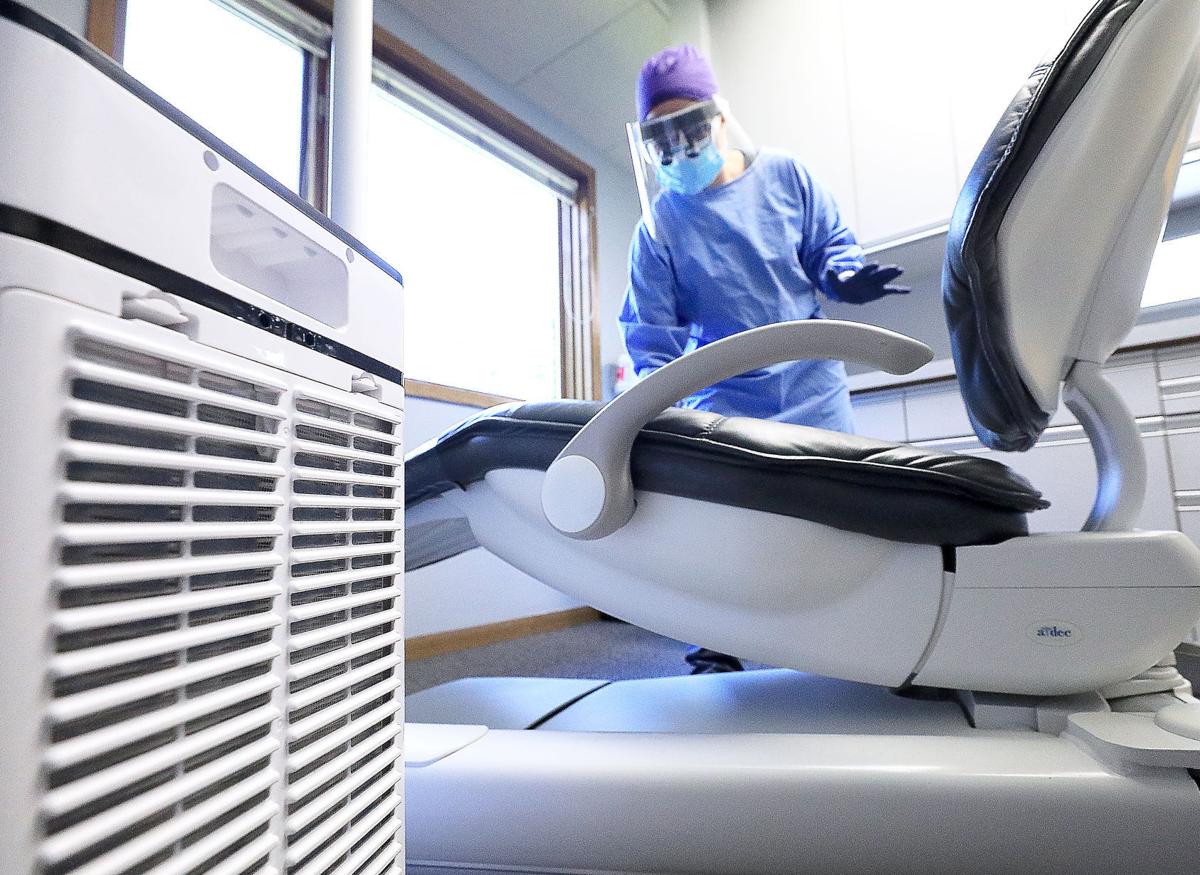 Smart Dental, like some other dental clinics, improved its air filtration system in response to the COVID-19 pandemic.