Bunny Balk of Columbus says marijuana prevents pain from fibromyalgia and controls anxiety and post-traumatic stress disorder. Before she started smoking marijuana, or cannabis, she was addicted to opioids prescribed by doctors, she said.

Marijuana “lets me continue my life without being in bed and looking for that next pill,” said Balk, 60, a grandmother of six and former real-estate broker.

Wisconsin, which has not joined 34 states in approving medical marijuana, might be inching closer to making the move. New Democratic Gov. Tony Evers has proposed it, and a bipartisan group of lawmakers in the Republican-controlled Legislature is working on a bill.

But while Assembly Leader Robin Vos, R-Rochester, has said he’s open to the idea, Senate Majority Leader Scott Fitzgerald, R-Juneau, has said he and most Senate Republicans are opposed.

Doctors, too, are divided on whether the state should authorize marijuana for therapeutic uses, as neighboring Iowa, Illinois, Michigan and Minnesota have done.

Dr. Michael Miller, a recent Wisconsin Medical Society officer and past president of the American Society of Addiction Medicine, said marijuana can be addictive, isn’t better than approved drugs and is unpredictable because purity and potency vary.

Proponents are pushing legislatures to circumvent the Food and Drug Administration drug approval process for medical marijuana because they want to allow pot for any use, said Miller, a UW-Madison clinical instructor and psychiatrist with the Rock County Drug Court.

“The therapeutic use is, I think, a subterfuge,” he said. “It’s a transitional step toward legalization.”

Dr. Angela Janis, director of psychiatric services at UW-Madison’s University Health Services, cautions against marijuana use in childhood and adolescence, when it can affect long-term cognition and mental health.

But she said research has found considerable benefit in adults for pain, nausea and muscle spasms, and some studies suggest help for sleep disorders and neurological conditions such as Parkinson’s disease.

“There’s benefit, but it’s not for everything, and it’s not for everyone,” said Janis, chief medical officer of LeafLine Labs, one of two companies permitted to sell cannabis products for medical use in Minnesota.

Dr. Zorba Paster, who works at SSM Health in Oregon, said he supports medical marijuana. He brought attention five years ago to a little-used state law that already allows residents to possess marijuana with the “valid prescription or order of a practitioner.”

Paster wrote a letter saying Kinsley, one of his patients, could use marijuana for his bowel symptoms. When Baraboo police officers confiscated a small amount of pot from Kinsley’s car in 2014, Kinsley showed them the letter, which led them to forgo charges.

Paster said that after the incident he turned down numerous requests for such letters from people who weren’t his regular patients. He writes a weekly column for the Wisconsin State Journal and regularly appears on broadcast media.

“I think medical marijuana should be legalized because right now opioids kill people and marijuana does not,” he said.

A 2017 report from the National Academies of Sciences, Engineering and Medicine said cannabis can treat chronic pain, nausea from chemotherapy and muscle spasms from multiple sclerosis.

“But it’s not clear that it’s better than other options that are out there,” Dr. Robert Wallace, a University of Iowa health scientist who worked on the national report, said at a forum at the state Capitol last month.

Smoking cannabis can make respiratory problems worse, but it doesn’t appear to increase the risk of lung, head and neck cancers, as smoking tobacco does, the report said.

Some studies suggest legalized medical marijuana decreases opioid use and overdose deaths, but there’s not enough evidence to confirm the finding, according to the National Institute on Drug Abuse.

Research on marijuana is limited because the federal government considers it a Schedule 1 drug, the most restrictive of drug categories, and the official supply available for studies is hard to obtain.

CBD is getting buzz, but does it work? And is it legal?

Wisconsin allows residents to use CBD, a non-psychoactive ingredient of marijuana, from any source if they have a doctor’s note — a requirement Evers wants to eliminate. No doctor’s note is required to possess CBD from hemp produced through a state program.

A CBD-based drug, Epidiolex, was approved by the FDA last year for two forms of severe childhood epilepsy. Two drugs containing THC, the main psychoactive compound in cannabis, are approved for nausea from chemotherapy and weight loss caused by AIDS.

In a Marquette Law School poll of Wisconsin voters in January, 59 percent of respondents said marijuana should be legal.

“The face of this debate has shifted dramatically in just the past eight to 10 years,” said Sen. Patrick Testin, R-Stevens Point.

Testin and state Rep. Mary Felzkowski, R-Irma, a cancer survivor, are working with Sen. Jon Erpenbach, D-Middleton, and Rep. Chris Taylor, D-Madison, who have previously introduced a medical marijuana bill, on an updated version of the measure.

Testin said his grandfather used marijuana to ease pain and increase his appetite while dying from cancer about 20 years ago. Veterans have told him they’ve turned to cannabis to get off opioids, he said.

“It’s unfortunate that men and women who serve our country have to essentially do criminal activity to get relief,” he said.

Gary Storck, of Madison, has long used cannabis for glaucoma he developed as a child, and says it also helps with pain from arthritis and prostate cancer, which he was diagnosed with last year.

Like Kinsley and Balk, Storck has no trouble getting or using cannabis, despite Wisconsin’s lack of an approved program.

But legalization “would take away the fear factor,” said Storck, 63, who blogs at cannabadger.com.

“At least it will be talked about,” he said.

Toxoplasmosis, an infection that can cause miscarriages and birth defects and be deadly in people with weak immune systems, is hard to study b…

Health measures a key issue as Legislature ramps up

Health care promises to be a key issue in the state Legislature this year, with bills already in play to regulate pharmacy benefit managers, d…

The proposal calls for allowing criminal records to be expunged for people with previous convictions for small amounts of marijuana.

While “the facility had additional opportunities to improve compliance with risk mitigation strategies and alternative treatments, the team did not find evidence that opioids were being indiscriminately prescribed,” said the report, prompted by a request from Sen. Tammy Baldwin and a confidential complaint.

The center will aim to improve the health of low-income women, infants and families.

Graduate students at the La Follette School of Public Affairs analyzed how factors such as administrative costs and consumers purchases would be affected by the legalization of medical marijuana.

'It's just a church, man, it (marijuana) is sacrament,' said a witness who helps clean the church. 'I don't get it.' 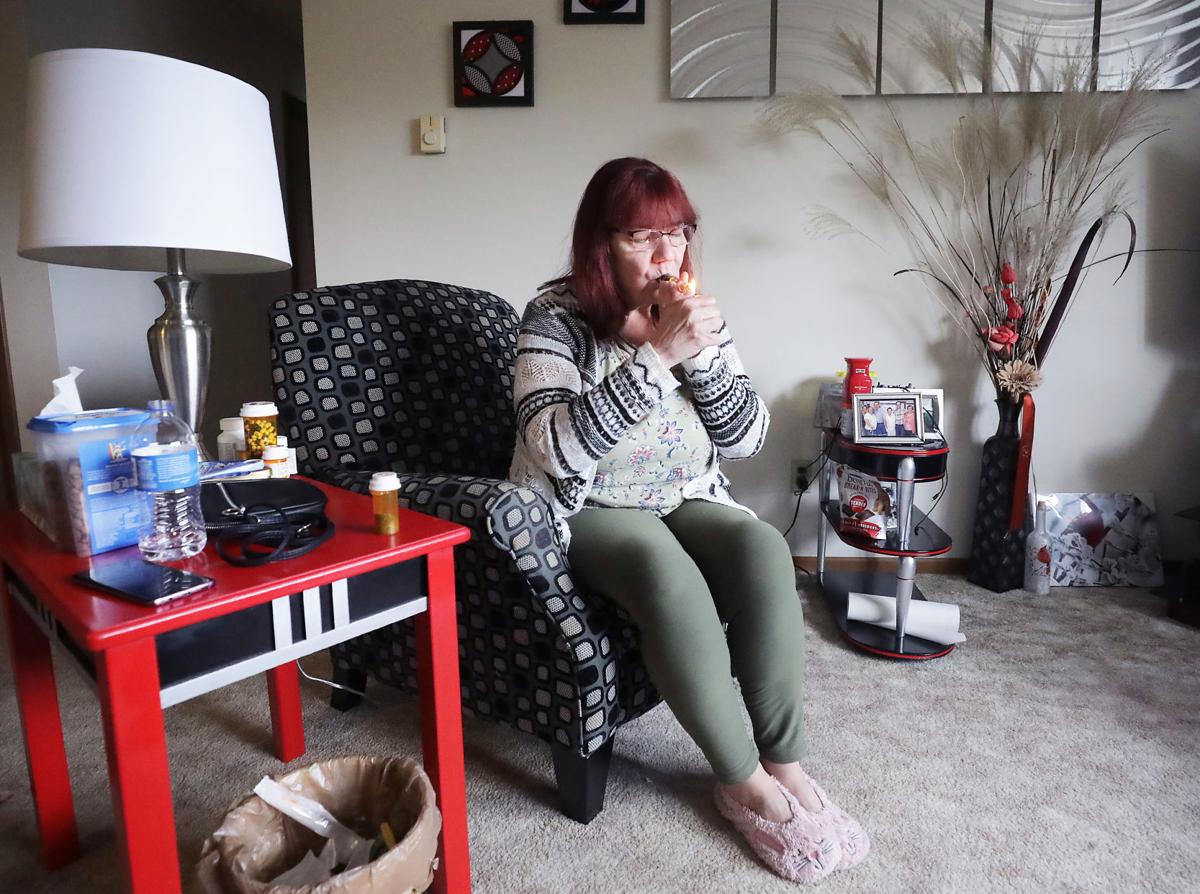 Bunny Balk of Columbus said she smokes marijuana to relieve pain from fibromyalgia and prevent symptoms of anxiety and post-traumatic stress disorder. Before she started using cannabis, she was addicted to opioids prescribed by doctors, she said. Wisconsin might join 34 states in approving medical marijuana, though many lawmakers remain opposed. 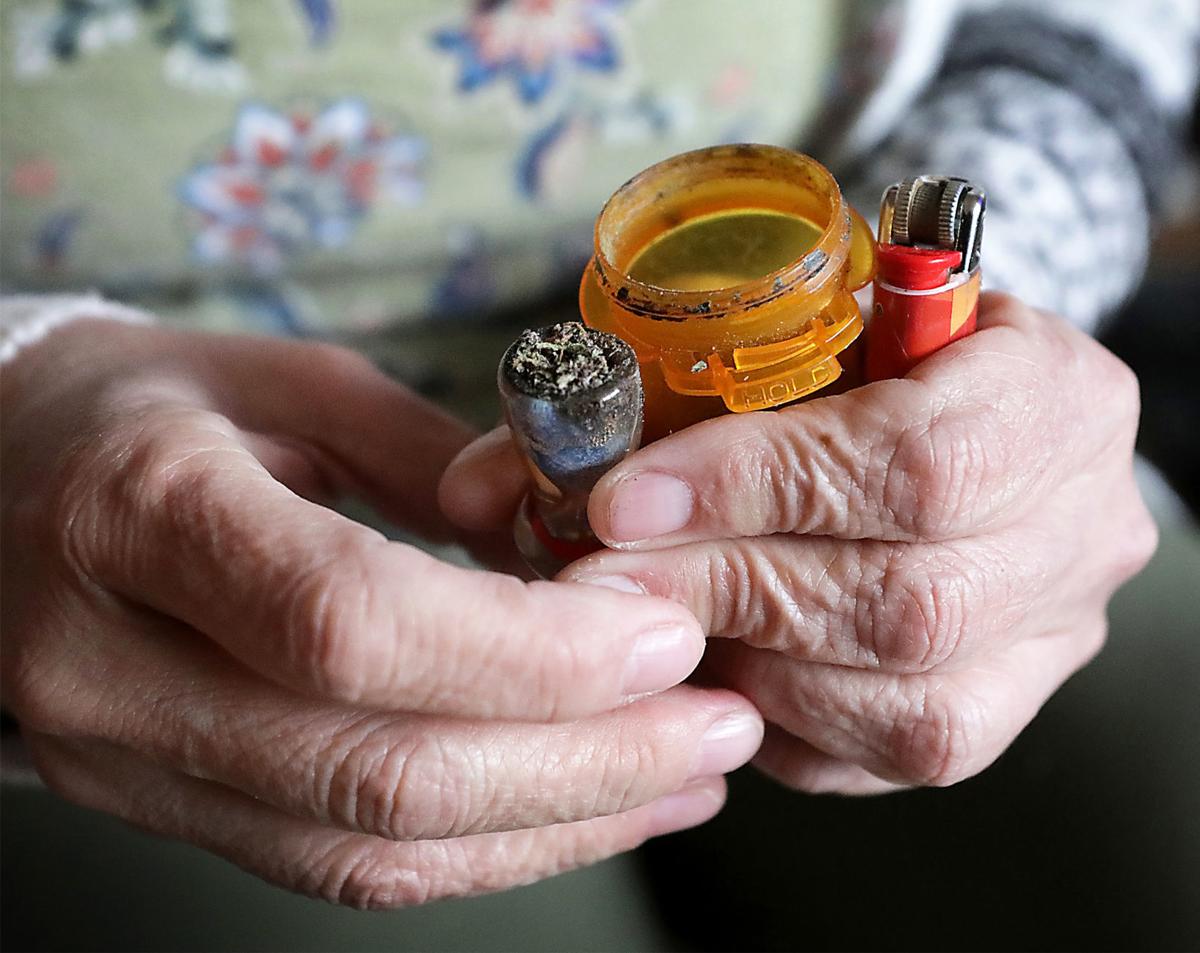 Bunny Balk said she uses about one ounce of marijuana, or cannabis, a month. For pain, "it works better than anything else," she said. 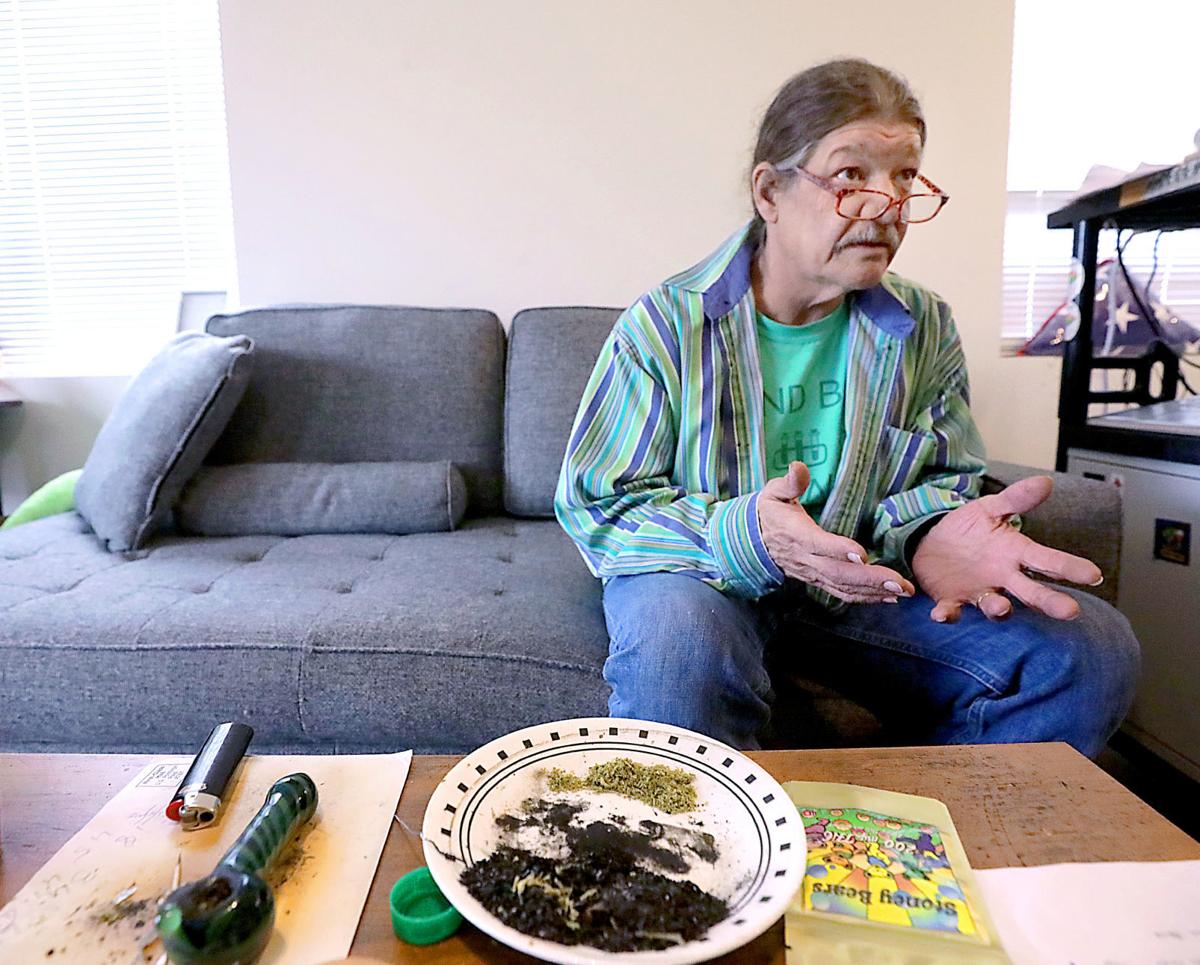 When Baraboo police confiscated marijuana from Greg Kinsley's vehicle a few years ago, he showed them a note from his doctor saying he could use marijuana for symptoms of Crohn's disease, a digestive disorder. Baraboo authorities decided not to charge him. Still, Kinsley, of Madison, hopes Wisconsin fully approves medical marijuana. "Not looking over your shoulder would help," he said. 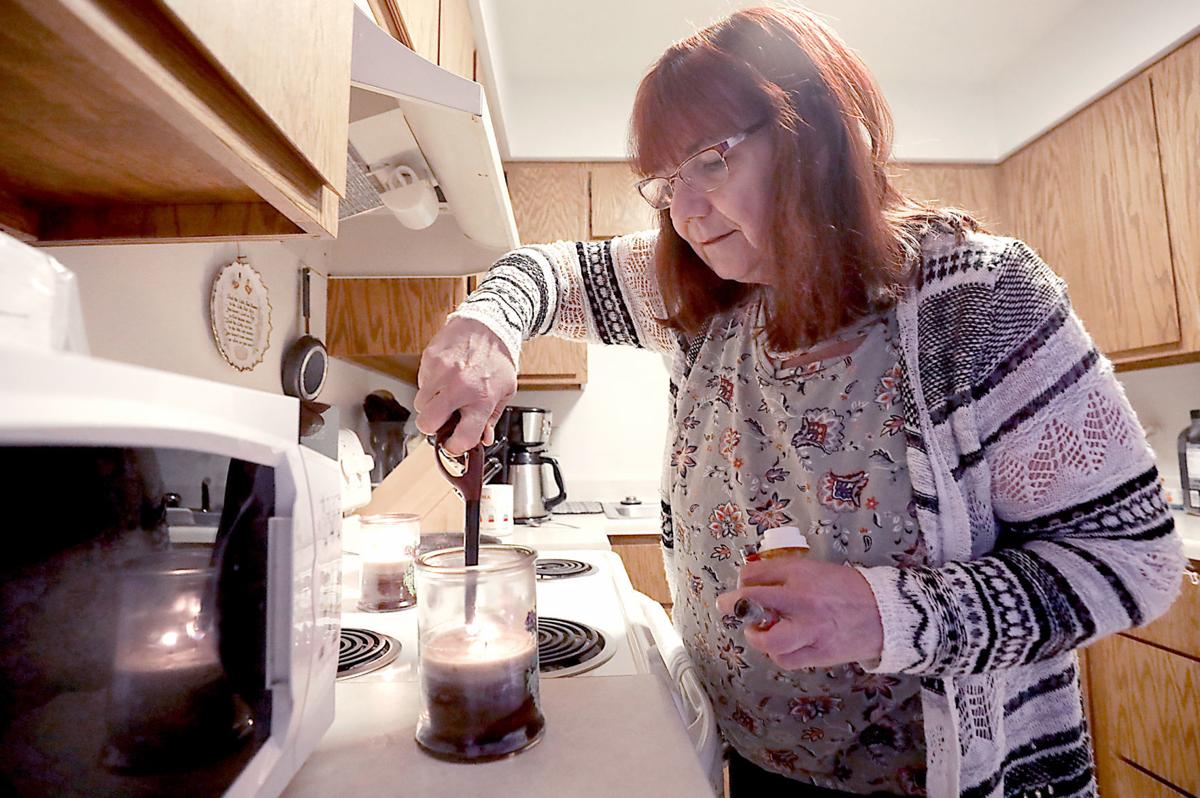 Before Bunny Balk uses marijuana for pain and to ease mental health conditions, she typically lights a scented candle and places a pillow at the base of her apartment door to control the smell. 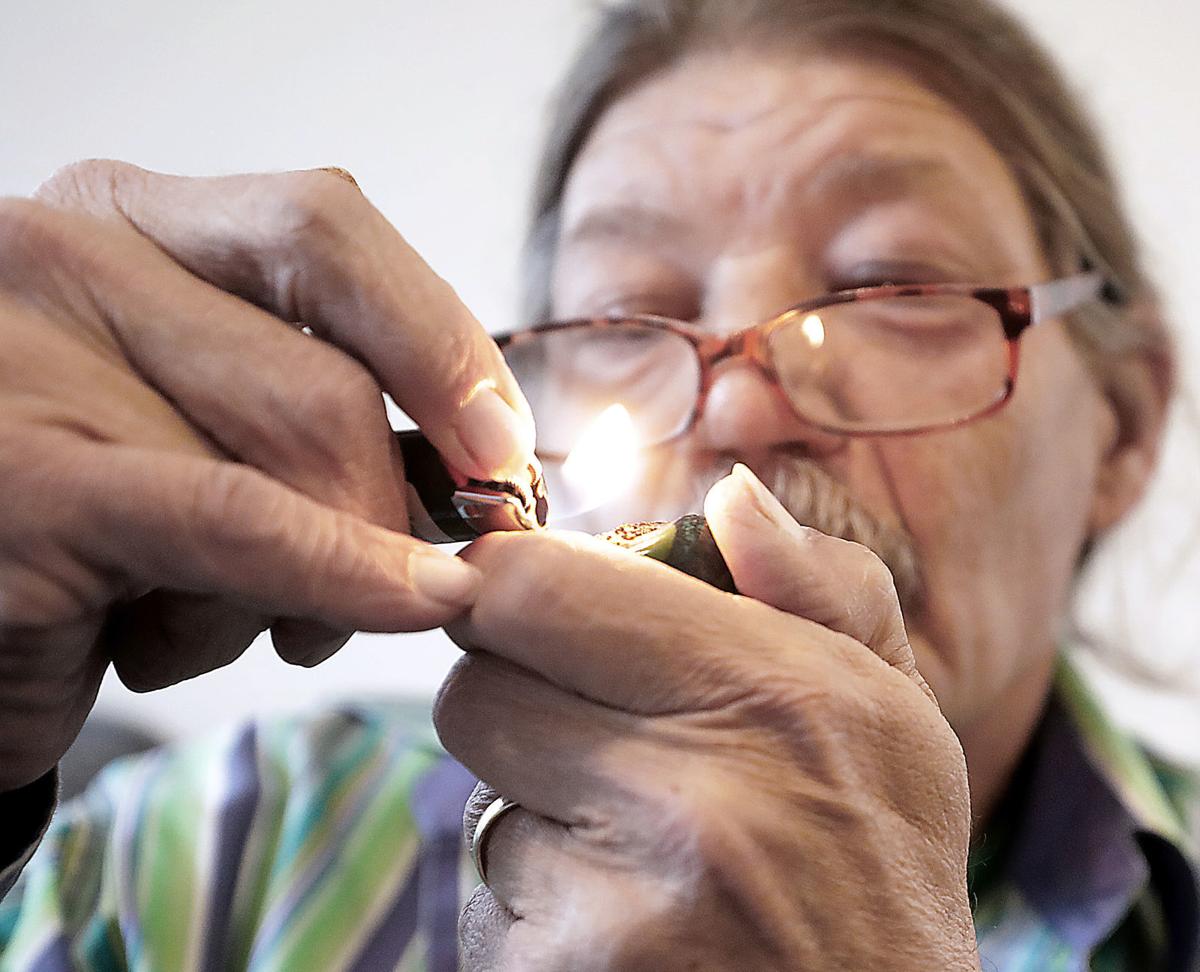 Greg Kinsley, of Madison, said smoking marijuana prevents cramps and bleeding from Crohn's disease, a digestive condition he has had for many years. 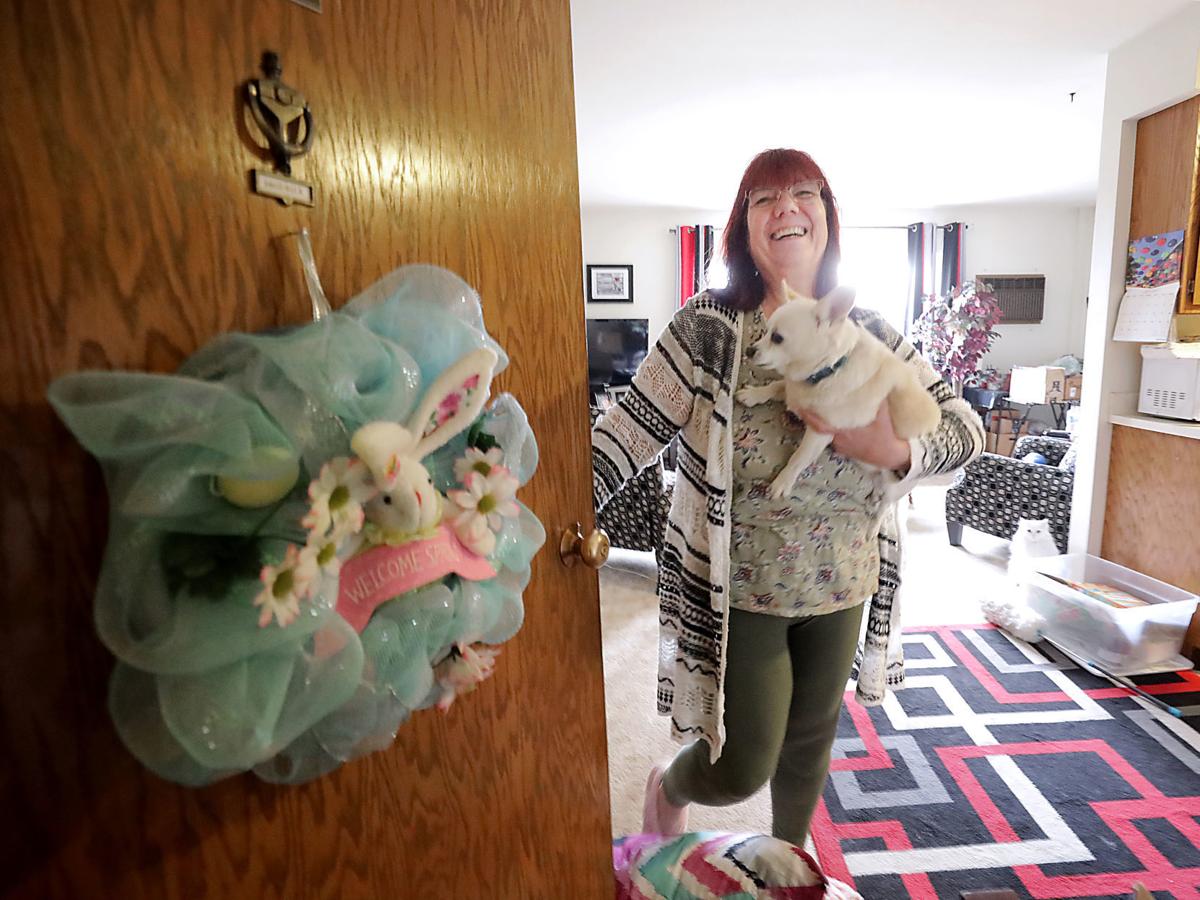 Bunny Balk, a grandmother of six and former real-estate broker, lives in Columbus. She is active with Americans for Safe Access, a group trying to legalize medical marijuana. 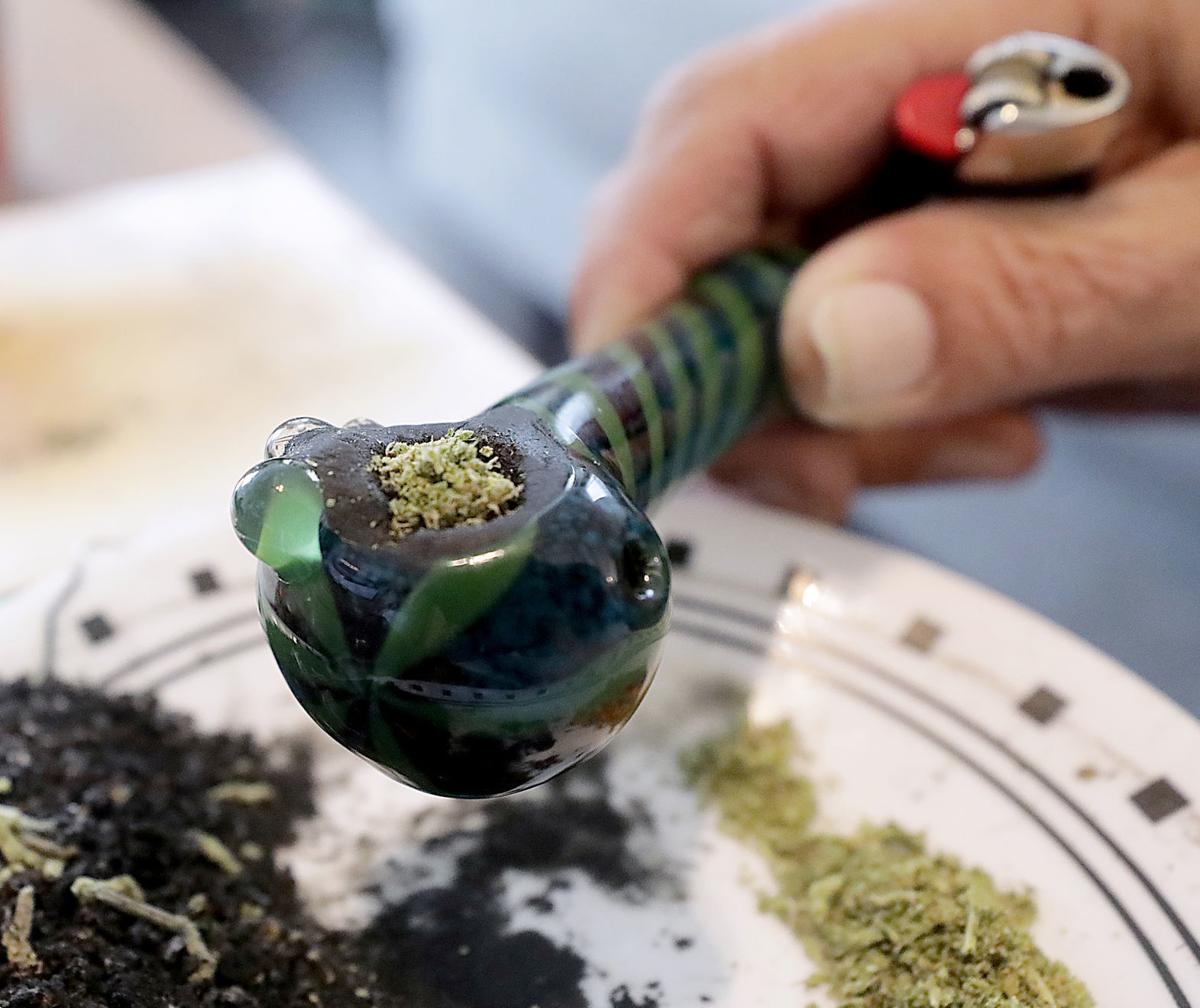 Greg Kinsley typically ingests marijuana through smoking but sometimes eats gummy candies or drinks soda infused with THC, one of the main ingredients in marijuana. He said he uses marijuana for Crohn's disease, a bowel disorder.