A UW-Madison scientist’s experiment at the International Space Station, scheduled to be launched by rocket Sunday, could help identify new treatments for antibiotic-resistant bacteria and keep astronauts healthy during space travel.

The research involves phages, viruses that infect and sometimes kill bacteria but appear not to harm humans. Discovered more than a century ago, phages have been used therapeutically in Eastern Europe and the former Soviet Union. In the U.S., they were largely ignored after the discovery of penicillin in 1928 and the development of other antibiotics.

Now that antibiotic resistance has become a global problem, with the World Health Organization issuing a new warning last month, phages (“FEI-juhz”) are receiving renewed attention. The Food and Drug administration approved the first clinical trial of phage therapy last year, and American doctors have reported case studies of patients near death who have been successfully treated with phages.

“My prediction is that within a couple of years, we’ll actually have this as one of the (approved) therapy options,” said Vatsan Raman, an assistant professor of biochemistry at UW-Madison whose phage experiment is expected to take off Sunday from NASA’s Wallops Flight Facility in Virginia.

Astronauts at the space station will thaw out Raman’s tubes of frozen phages, E.coli bacteria and mixtures of the two for different periods of time: one hour, two hours, four hours and 25 days.

Afterward, in his lab on campus, Raman and his graduate students will do the same thing. Then they’ll analyze and compare the samples from space and Earth.

The goal is to see how microgravity in space affects the interaction of phages and bacteria, and whether mutations induced by space’s increased radiation alter the function of phages or bacteria, Raman said.

Phages might kill bacteria more efficiently in space than on Earth. That could help scientists like Raman identify ways of creating synthetic phages to best target antibiotic-resistant bacteria, a key focus of his lab.

“We could use those lessons to evolve phages on Earth with new function,” he said.

Eventually, the work could also help people stay healthy as they travel or live in space. Phages and beneficial bacteria could be injected into people’s guts before entering space to improve their microbiomes, the mix of microorganisms that has been shown to play a role in physical and mental health.

“Can you make rationally designed compositions of phages and bacteria, and install them in astronauts to make them more suitable for long-term space travel?” Raman said.

UW-Madison graduate students Phil Huss and Chutikarn Chitboonthavisuk helped prepare the experiment, working with some of the constraints involved in doing research in space instead of on Earth.

Normally, they would mix phages and E.coli just before conducting an experiment. But they couldn’t ask the astronauts to combine the two in space, so they flash-froze the samples in the lab immediately after mixing. “We don’t want them to interact with each other yet,” Chitboonthavisuk said.

In the lab, they would normally test a wide variety of samples, building in redundancy so the results carry statistical significance. At the space station, they’re limited to 32 tubes — in four bags of eight tubes each, double-bagged and specially heat-sealed.

“That was the most challenging thing, designing an experiment with only 32 tubes,” Huss said.

The experiment is funded by the U.S. Defense Threat Reduction Agency, which aims to counter weapons of mass destruction, including drug-resistant germs.

In his lab, Raman’s team is trying to design phages to attack E.coli involved in urinary tract infections. Their work on phages to target bacteria that cause disease in infants has been funded by the Bill and Melinda Gates Foundation.

About 700,000 people worldwide die each year from drug-resistant infections, a toll that without intervention is expected to climb to 10 million a year by 2050, the United Nations said in a report last year.

Doctors have reported case studies of using phage therapy to save patients, including some with cystic fibrosis who harbored deadly drug-resistant infections.

The two-vehicle crash happened around the intersection of Highway M and Highway 113 in the town of Westport on Friday night.

At least 20 vehicles, including at least four semi trucks, were involved in the crash, police said.

Monkeys under deep anesthesia woke up and moved around after precise electric stimulation of their brains, and became unconscious again once t… 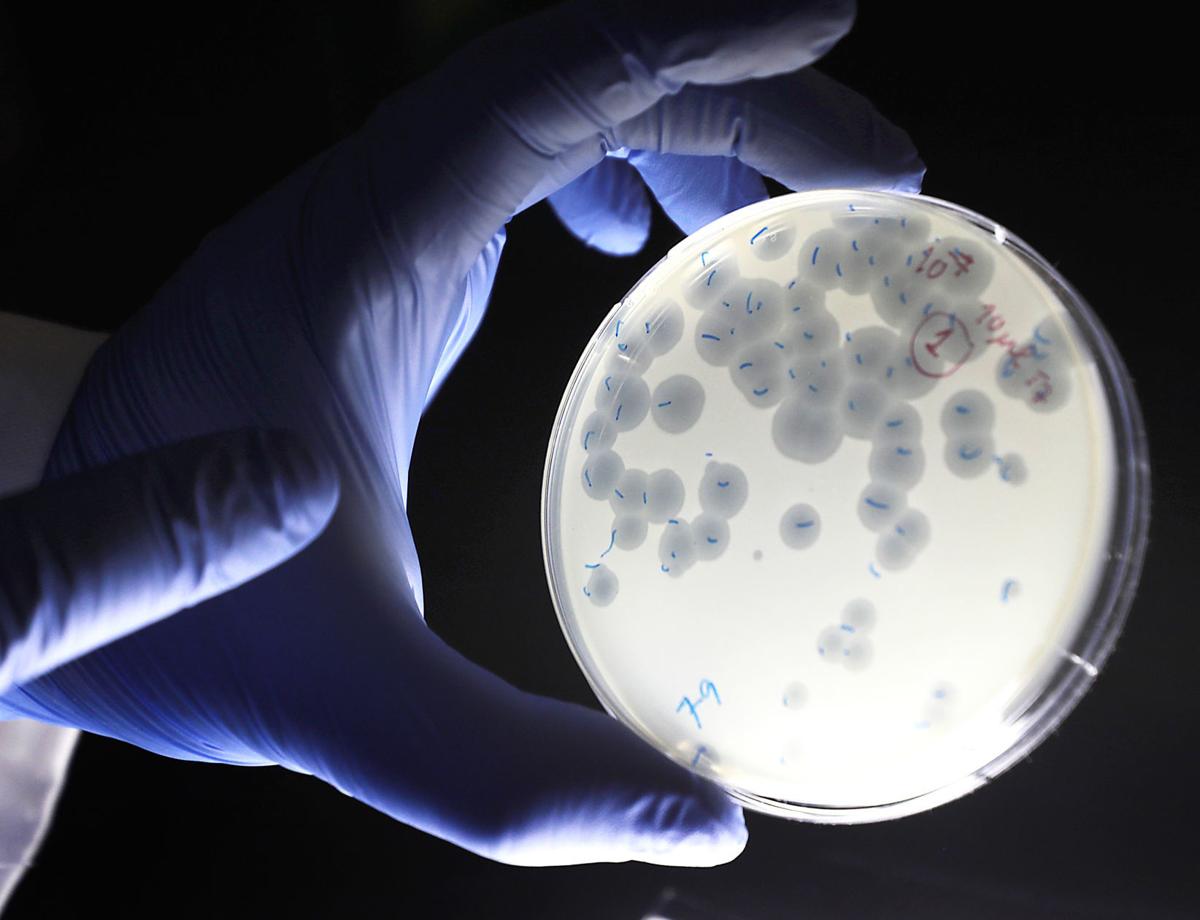 Plaques of phages, viruses that infect bacteria, in a plate of E.coli bacteria. A UW-Madison biochemist is sending phages and bacteria to the International Space Station for an experiment on how microgravity and radiation affect the viruses’ ability to treat antibiotic-resistant infections. 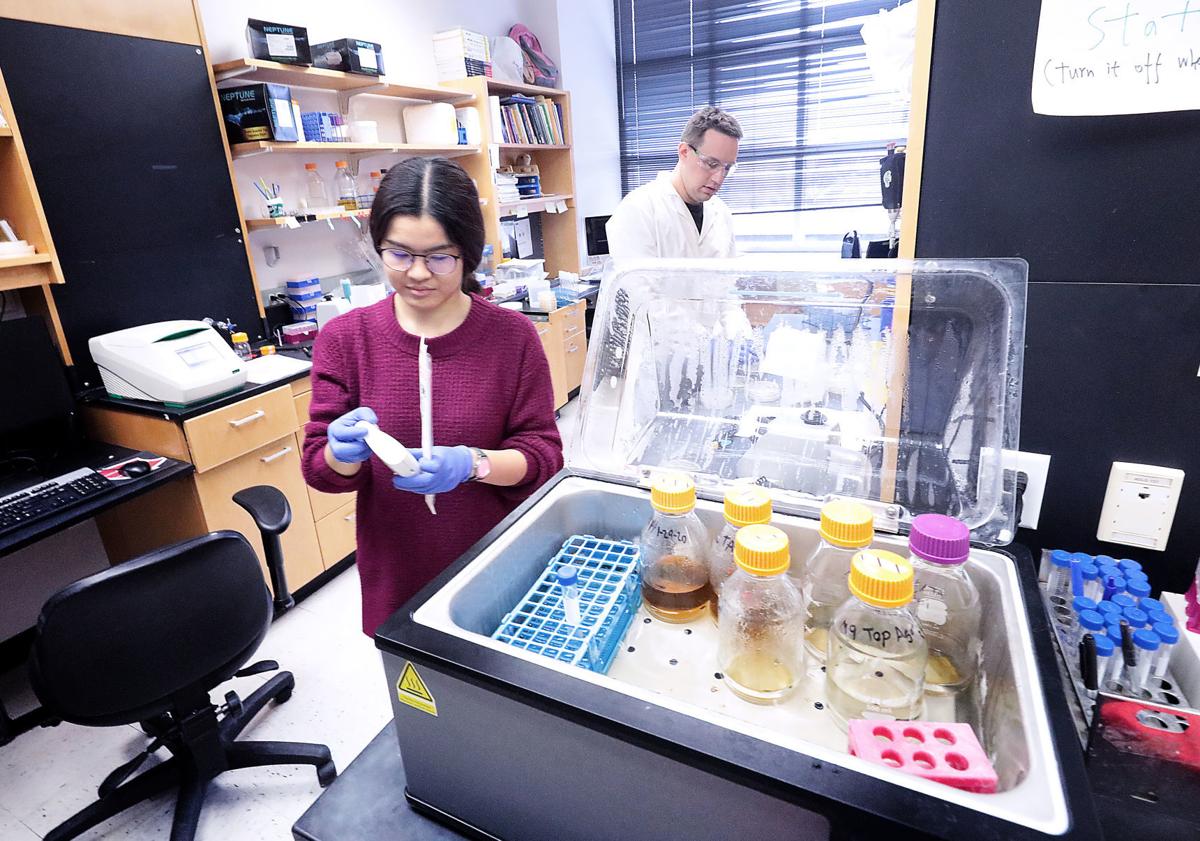 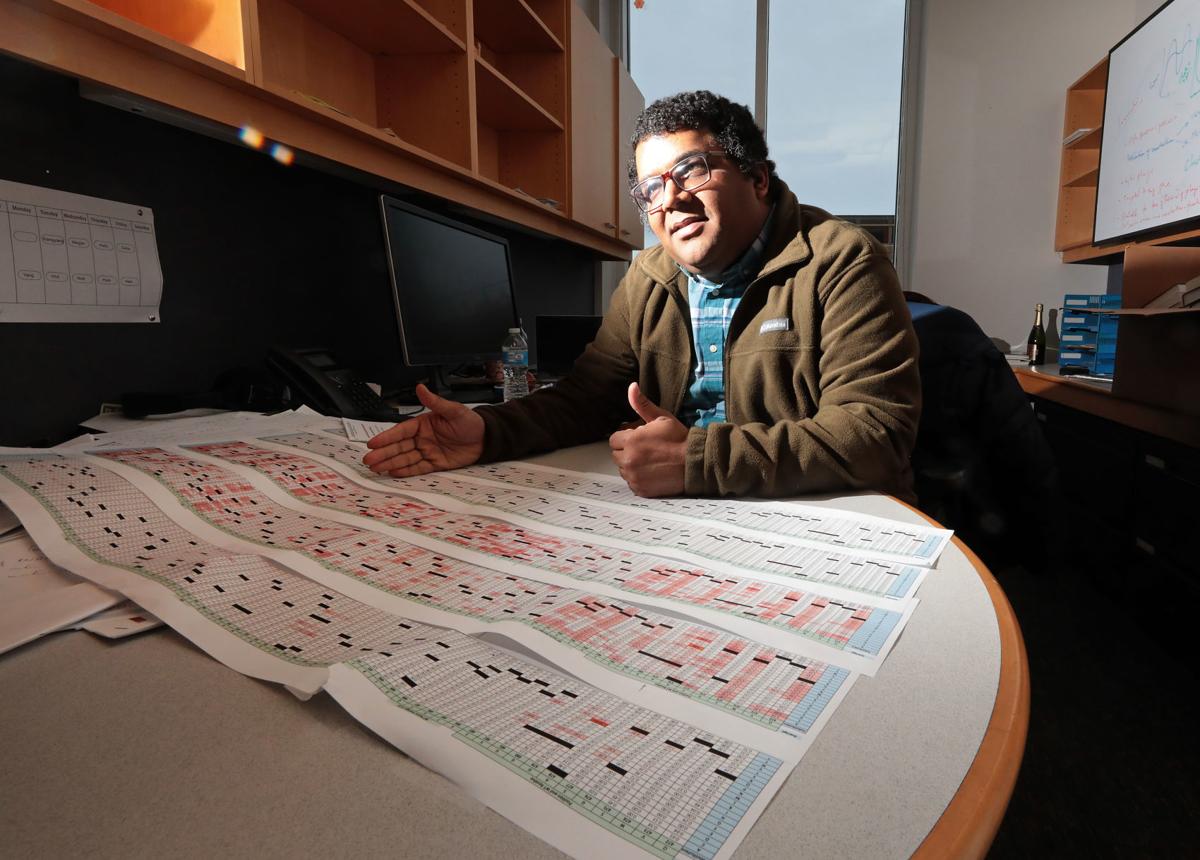 Vatsan Raman, an associate professor of biochemistry at UW-Madison, introduces mutations to phages, viruses that infect bacteria, to see which changes make phages deadlier to bacteria. The alterations are recorded in charts of amino acids that make up particular phage proteins. 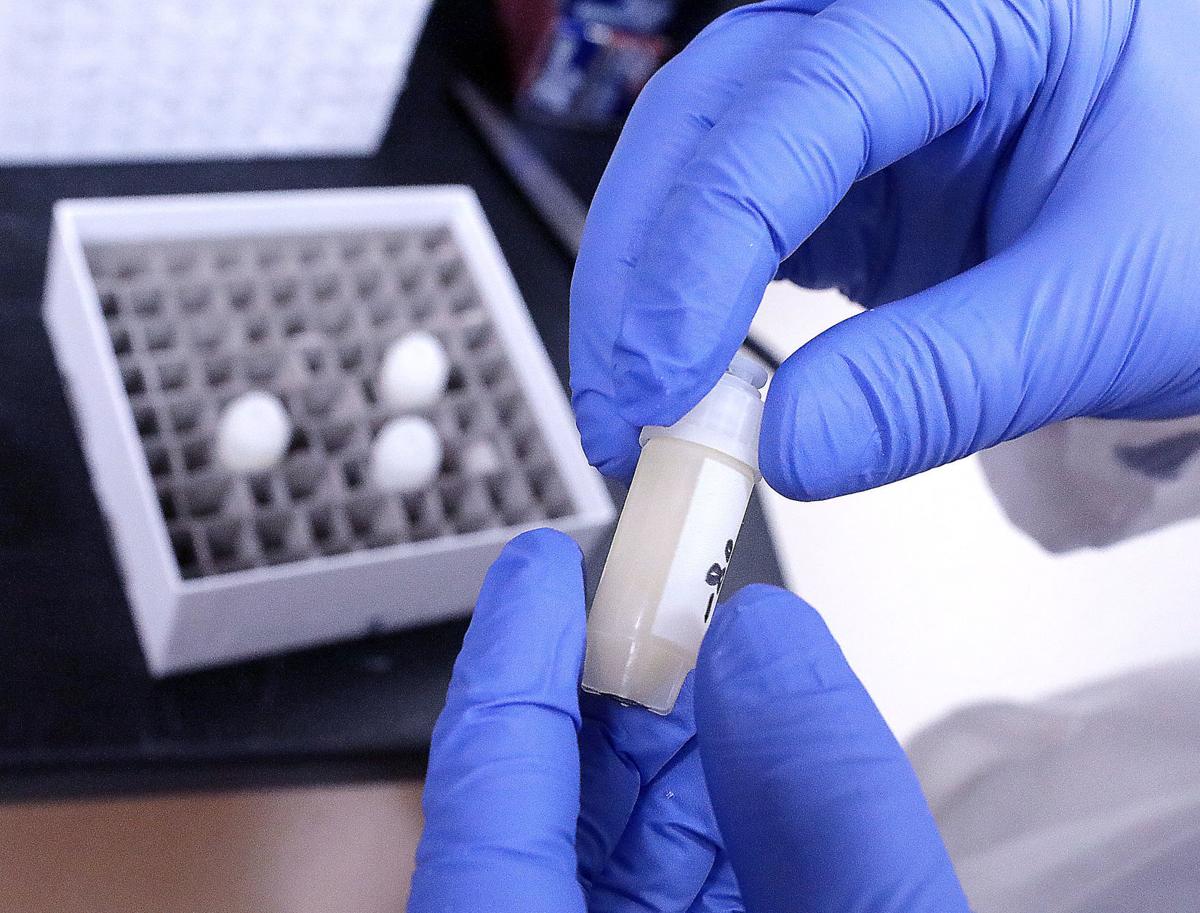 A tube of frozen bacteria and phages, viruses that infect bacteria, in Vatsan Raman's lab is similar to tubes he is sending to the International Space Station on a rocket scheduled to launch Sunday. 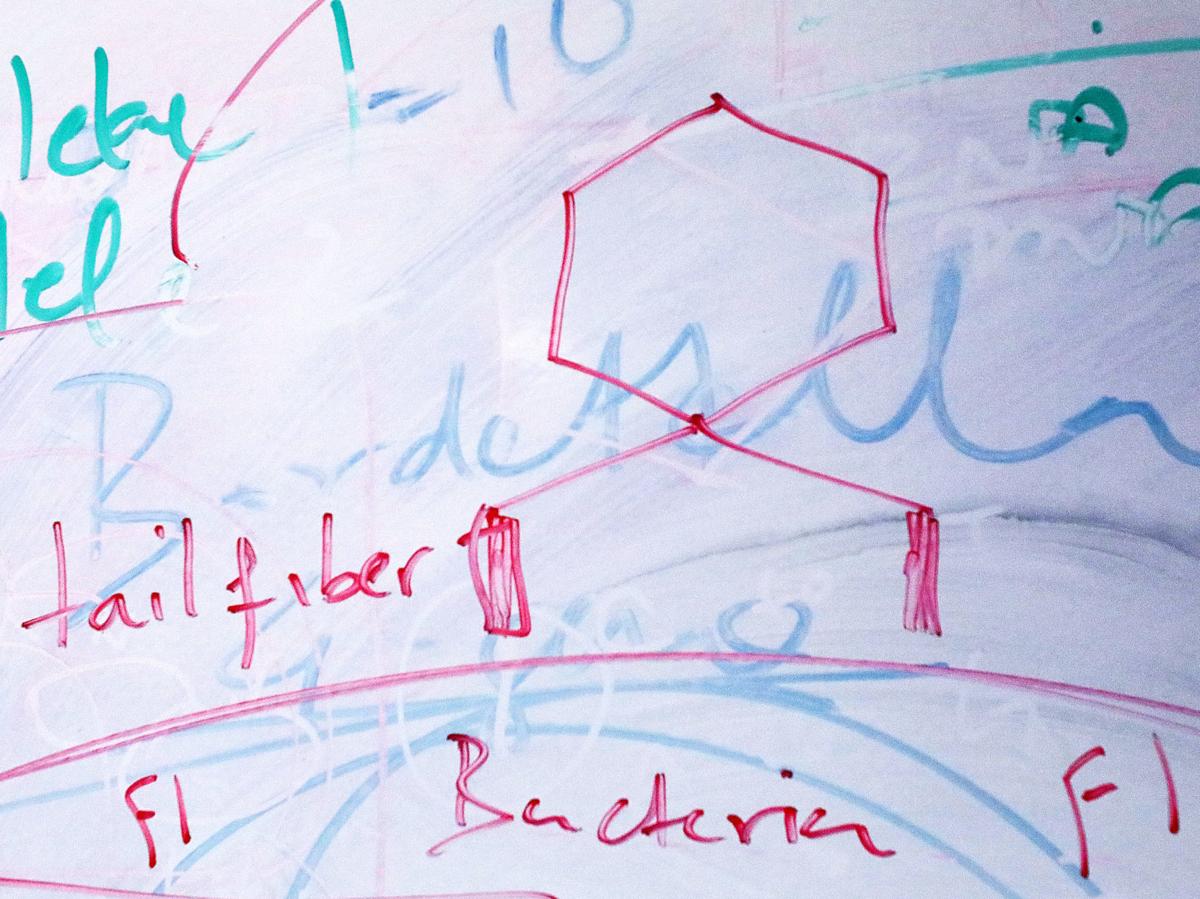 Phages, viruses that infect bacteria, look like lunar modules, with legs, or tail fibers, that attach to bacteria, as a diagram drawn by UW-Madison biochemist Vatsan Raman shows. Phages interact with bacteria through diffusion, not in a targeted manner. 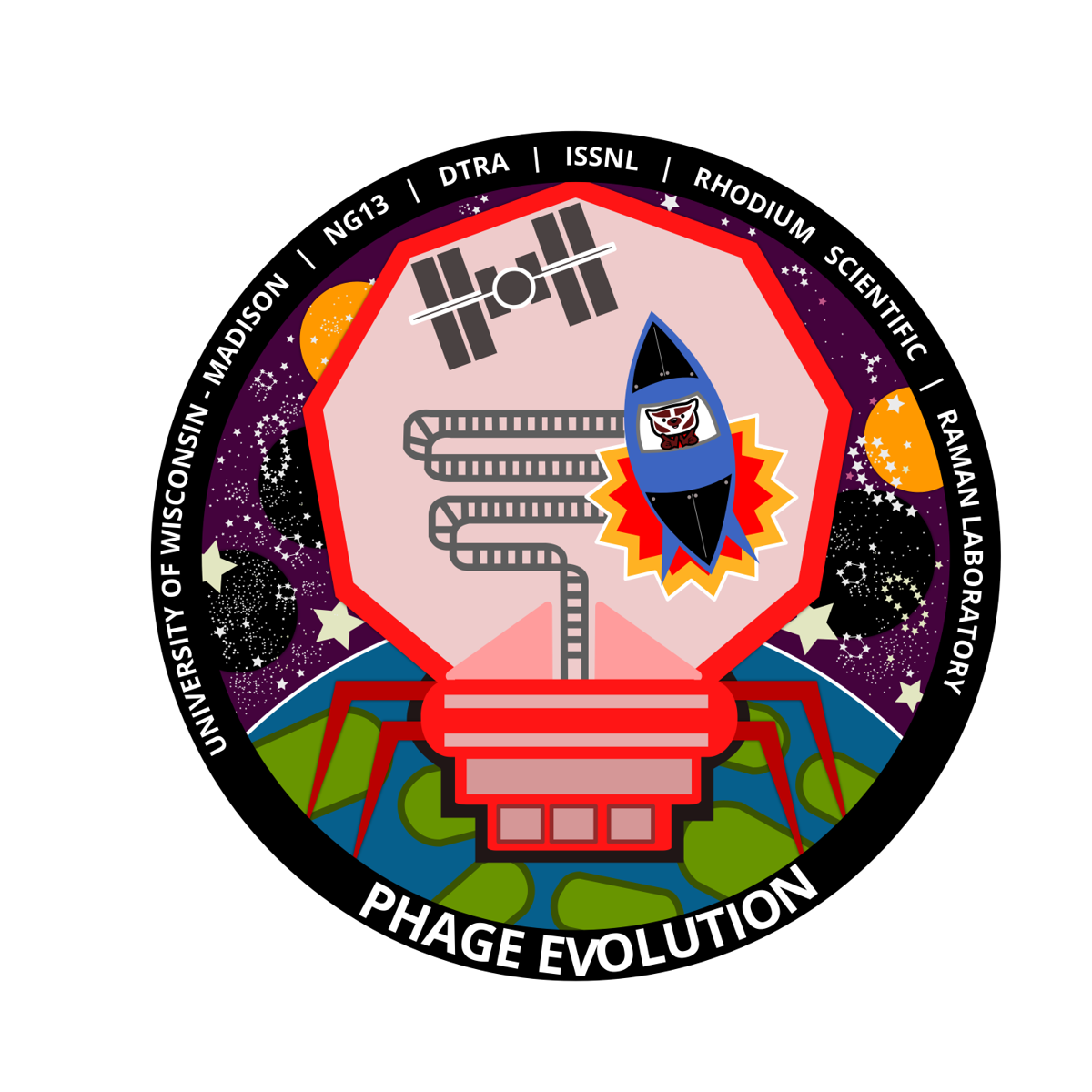 Teams that send research projects to the International Space Station can create designs used to make commemorative patches and stickers. UW-Madison graduate student Chutikarn Chitboonthavisuk put together this design for an experiment about phages, with Bucky Badger inside a rocket.