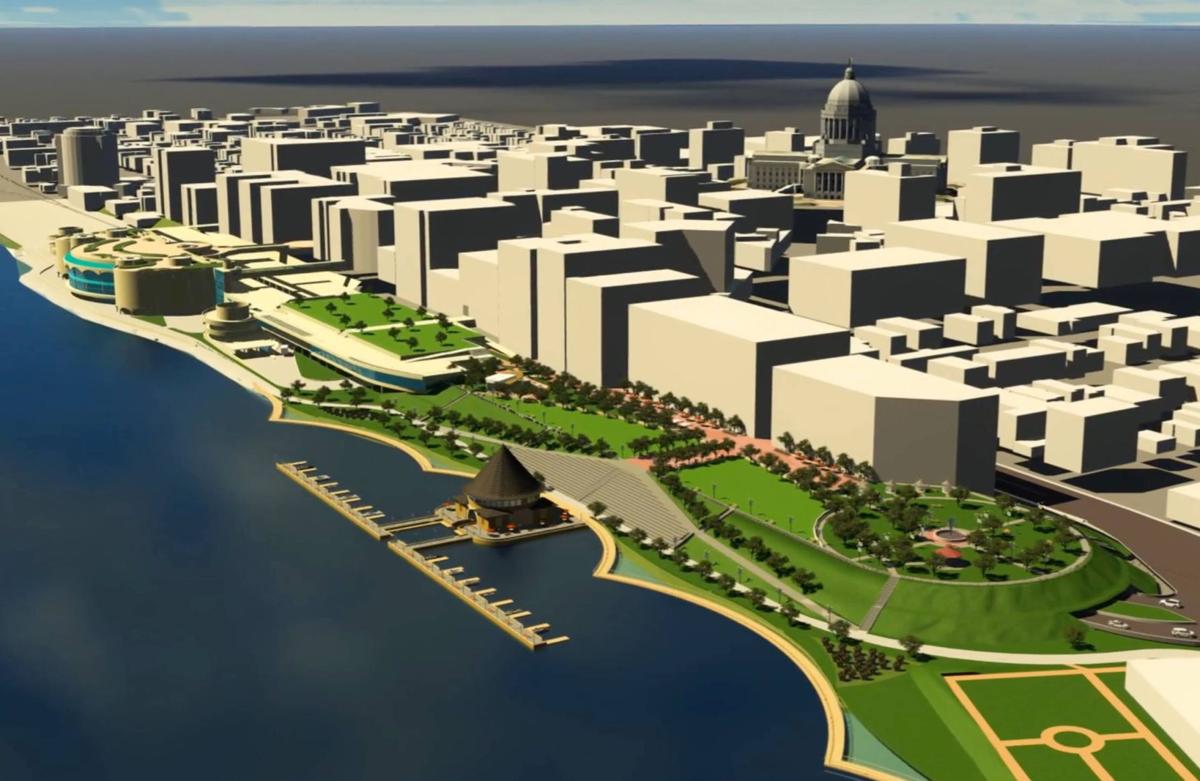 The Madison Community Foundation awarded seed money for an ambitious project that envisions a huge park over John Nolen Drive and a Frank Lloyd Wright-designed boathouse that, if embraced by city policymakers, would likely take decades to come to fruition. At left is Monona Terrace. 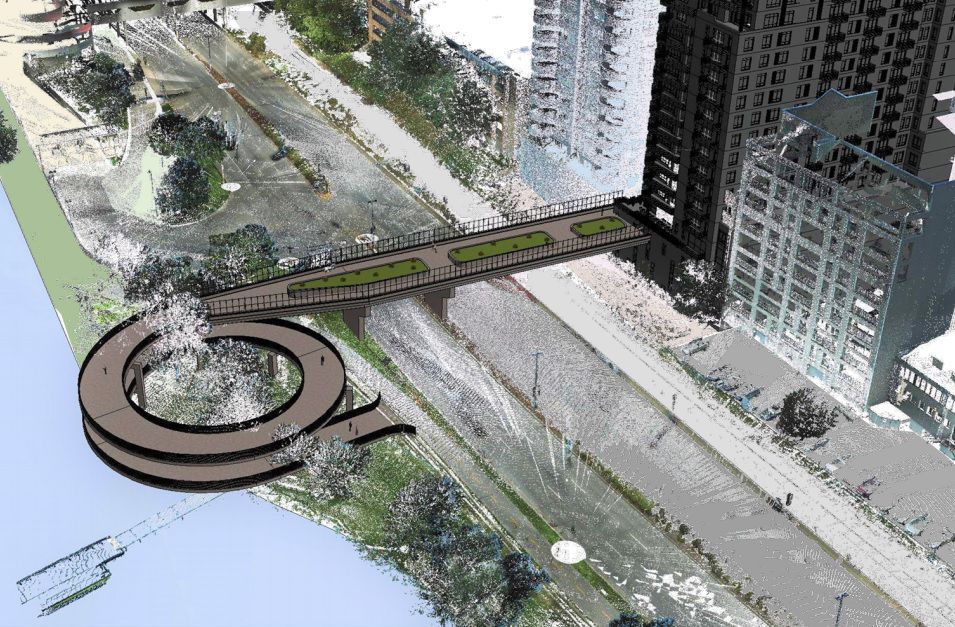 A pedestrian and bicycle bridge over John Nolen Drive was presented to the city and the public at a preliminary findings presentation by Strand Associates, which is studying options for connecting Law Park with the rest of Downtown.

To kick-start an ambitious redevelopment of Downtown’s Lake Monona waterfront, a Madison charity is funding the first steps of a massive green-space plan that could take decades to complete and cost hundreds of millions of dollars.

The Madison Community Foundation announced Tuesday that it awarded the Nolen Waterfront project $27,500 for a study to determine the feasibility and costs of constructing a roof-deck park over John Nolen Drive to expand Law Park.

The Nolen Waterfront project idea was put together by Madison Design Professionals Workgroup to better connect Downtown with Lake Monona by creating a roof-deck park over John Nolen Drive, improving the Blair Street intersection, and building a boathouse designed by Frank Lloyd Wright in 1893.

“We are extremely grateful to the Madison Community Foundation for their willingness to invest in a transformative vision for the city and provide ‘seed money’ to test its feasibility that will allow the project to move forward,” said Tim Anderson, an architect and urban planner working with the group.

The work group is made up of Madison architects and urban planners who volunteer their time to work on civic projects. Nolen Waterfront is the group’s largest undertaking, which was inspired by John Nolen’s 1909 city plan.

The redevelopment of the John Nolen Drive corridor wouldn’t be instant and could come with a price tag of hundreds of millions of dollars.

“It could take decades” to complete, said Tom Linfield, the foundation’s vice president. “We want to support the visionaries in our community, and we’re in this for the long run.”

The Nolen Waterfront project is also being considered by the city of Madison, which hired Strand Associates to perform its own study on options to better integrate Law Park into Downtown and rework the intersection of John Nolen Drive with Williamson, Blair and Wilson streets.

In a public presentation of preliminary findings in April, more modest options less costly than the roof-deck park came to the forefront. Strand Associates is expected to present its final findings to the city in July.

A more traditional pedestrian-and-bicycle bridge over John Nolen Drive was named as an option to connect Downtown to Law Park, which sits on the lakefront one to three stories below the ground level of East Wilson Street a block north.

Ald. Mike Verveer, who represents the Downtown district, said the City Council already approved the purchase of an easement to connect Law Park to King and Wilson streets above John Nolen Drive and the rail lines that run next to it. Those easements could be used for a range of options, from a simple bridge to loftier uses like the roof-deck park.

“I don’t want the community to get their hopes up that this will allow the city to move forward expeditiously” in redeveloping the John Nolen Drive corridor, Verveer said. “The reality is that significant city funds would be needed to make this a reality.”

Verveer noted that the city budget does not currently include money for any developments in that area.

Linfield said the work group was originally offered a larger grant, but it said $27,500 was all it needed at this point in the process.

The Nolen Waterfront isn’t the only project receiving funding from the Madison Community Foundation. As part of the foundation’s 75th anniversary, it is awarding grants totaling $1 million over the next year to 12 hand-picked projects that Linfield said he hopes will have a lasting impact for the next 75 years.

One of those projects is an art exhibit called “Madison 2092,” which will engage artists, designers and architects to work together and create a vision of what Madison might look like in the year 2092.

Linfield said the collaborators will be encouraged to consider anything from “the practical to the whimsical.”

The grant was awarded to the Wisconsin Academy of Sciences, Arts and Letters, and the exhibit is expected to run from Feb. 9 to April 8 of next year at the Overture Center’s James Watrous Gallery.

Chris Rickert: Tax relief a bigger priority in Madison than a cool-looking bridge

A pedestrian and bicycle bridge over a busy thoroughfare seems like a really expensive solution to some pretty modest problems.

The city's Engineering Division, which hired Strand Associates to prepare concepts and make recommendations, offered the latest concepts and set others aside at a public listening session at Monona Terrace on Monday night.

About $1 million were distributed over the past 12 months in honor of the anniversary to hand-picked organizations.

City to explore grand connections between Downtown and Lake Monona

The effort will lay the groundwork for a Law Park Master Plan that could be modest to grand in vision with long-term improvements costing several million dollars to more than $20 million.

The Madison Community Foundation awarded seed money for an ambitious project that envisions a huge park over John Nolen Drive and a Frank Lloyd Wright-designed boathouse that, if embraced by city policymakers, would likely take decades to come to fruition. At left is Monona Terrace.

A pedestrian and bicycle bridge over John Nolen Drive was presented to the city and the public at a preliminary findings presentation by Strand Associates, which is studying options for connecting Law Park with the rest of Downtown.