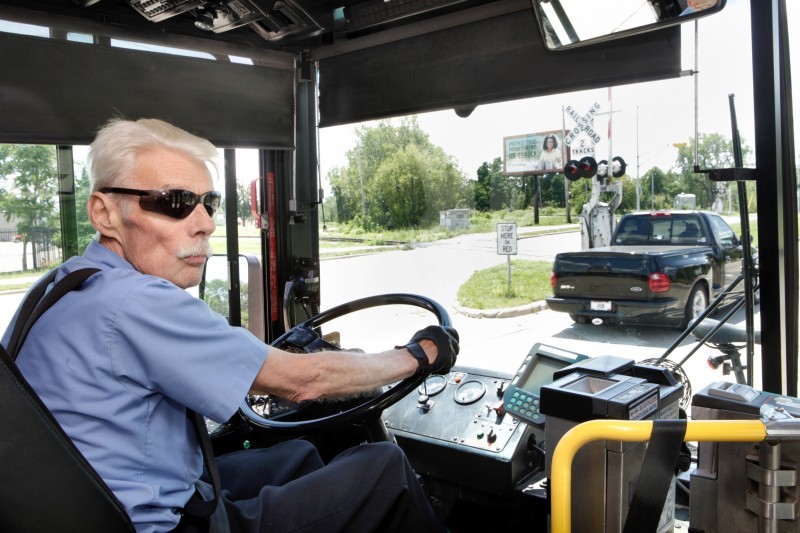 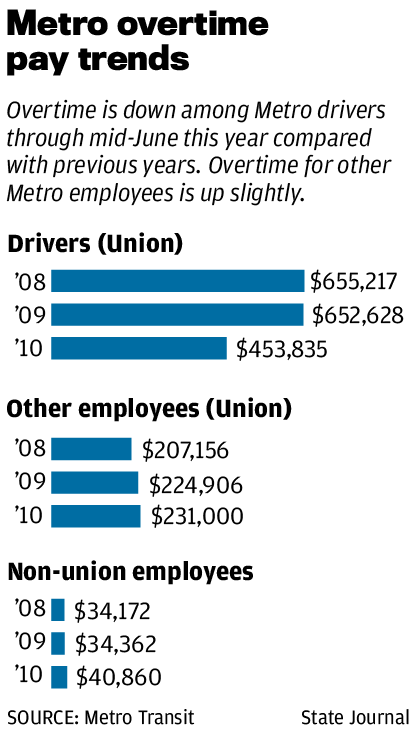 Amid criticism about six-figure bus driver salaries fueled by overtime, Metro Transit is reporting a 30 precent reduction in driver overtime costs through mid-June over the same period a year ago.

Over all, Metro overtime costs have decreased 20 percent through mid-June as the drop in driver overtime has been offset by slight increases by other employees.

Driver overtime reductions, detailed in a new report to the Transit and Parking Commission, have resulted from fewer absences without pay and fewer drivers showing up late, practices that require Metro to use overtime to cover bus routes, general manager Chuck Kamp said.

"We have made some progress," Kamp said. "There is progress yet to be made."

"It's good news," said Rachel Strauch-Nelson, spokeswoman for Madison Mayor Dave Cieslewicz, who has vowed to end six-figure driver earnings and is working with Metro management and the bus drivers union, Teamsters Local 695, to reduce absenteeism and change parts of the contract.

Drivers held four of the top five earning spots at Metro, the data show. Kamp was second at $51,946 through mid-June. But of the 10 drivers among Metro's top 20 earners, nine are making less than they did for the same period last year.

Kamp and Strauch-Nelson declined comment on current contract negotiations, which are in binding arbitration. In May, Teamsters rank and file rejected a tentative agreement between the city and union leaders that would have changed rules that let senior drivers make tens of thousands in extra pay.

Teamsters leader Gene Gowey could not be reached.

But the city's biggest concern and perception problem related to employee earnings is at the bus system. That's because its most experienced drivers with the highest base salaries get first crack at overtime and opportunities to earn "spread time" — when a work day, regardless of hours worked, spans more than 11.5 hours.

The rules don't always mean more net overtime costs but concentrate extra pay in fewer hands. The extra pay also lets those employees boost their state retirement income, which is based on an average of the three highest earning years.

"They put the hours in. They do deserve it," said driver Heath Harrison, adding that the highest earners have impeccable safety records.

A drop in absenses without pay

The key to controlling overtime is managing absences, Kamp said.

The 2008-09 Metro contract provides for progressive discipline for absences without pay and the agency is beginning to see an impact, Kamp said.

In the first two quarters of 2010, absences without pay dropped 6 percent and tardiness 16 percent, the report says.

Another challenge, Kamp said, is finding the right balance in hiring enough drivers to minimize overtime while not having too many, which can cause a rise in "guarantee hours" — a contract provision that ensures drivers get 40 hours of guaranteed pay each week whether or not they work that much.

Metro will continue to explore ways to manage absences in and outside the labor contract, Kamp said.

The new contract is in response to previous policies in which some Madison bus drivers were earning more than $100,000 because of overtime.

The city of Madison paid more than $15 million in extra earnings to employees in 2009, with 49 workers taking home more than $25,000 above their base pay last year, according to a Wisconsin State Journal analysis of city records.

Search the State Journal's database of compensation information for all city employees from 2000 through 2012.

The move by some council members comes after revelations that Madison paid workers $15.1 million in extra earnings in 2009.

He earned $159,258 in 2009, more than the mayor or police chief, because the contract allows senior bus drivers to have the first shot at overtime hours.