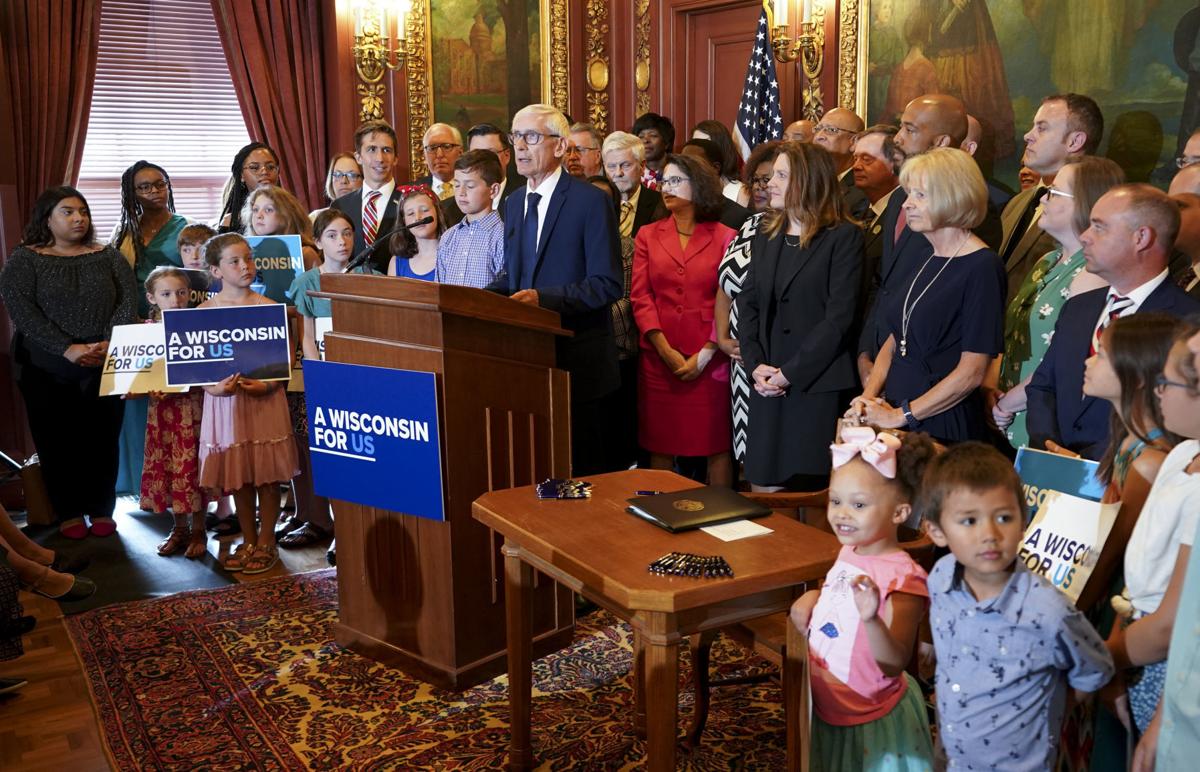 Gov. Tony Evers addresses the media and others at the state Capitol Wednesday before signing the two-year budget. Although the spending plan was largely the work of the Republican-led Legislature, the Democratic governor was able to remake parts of it through extensive use of his veto pen. 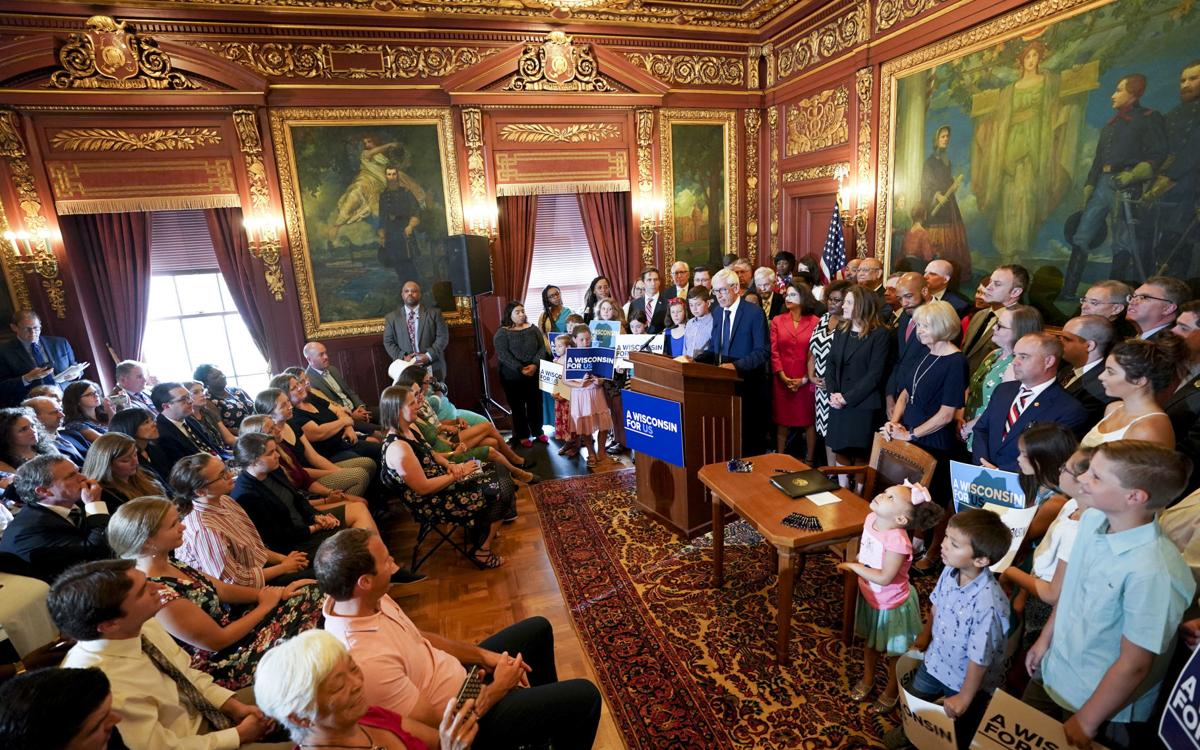 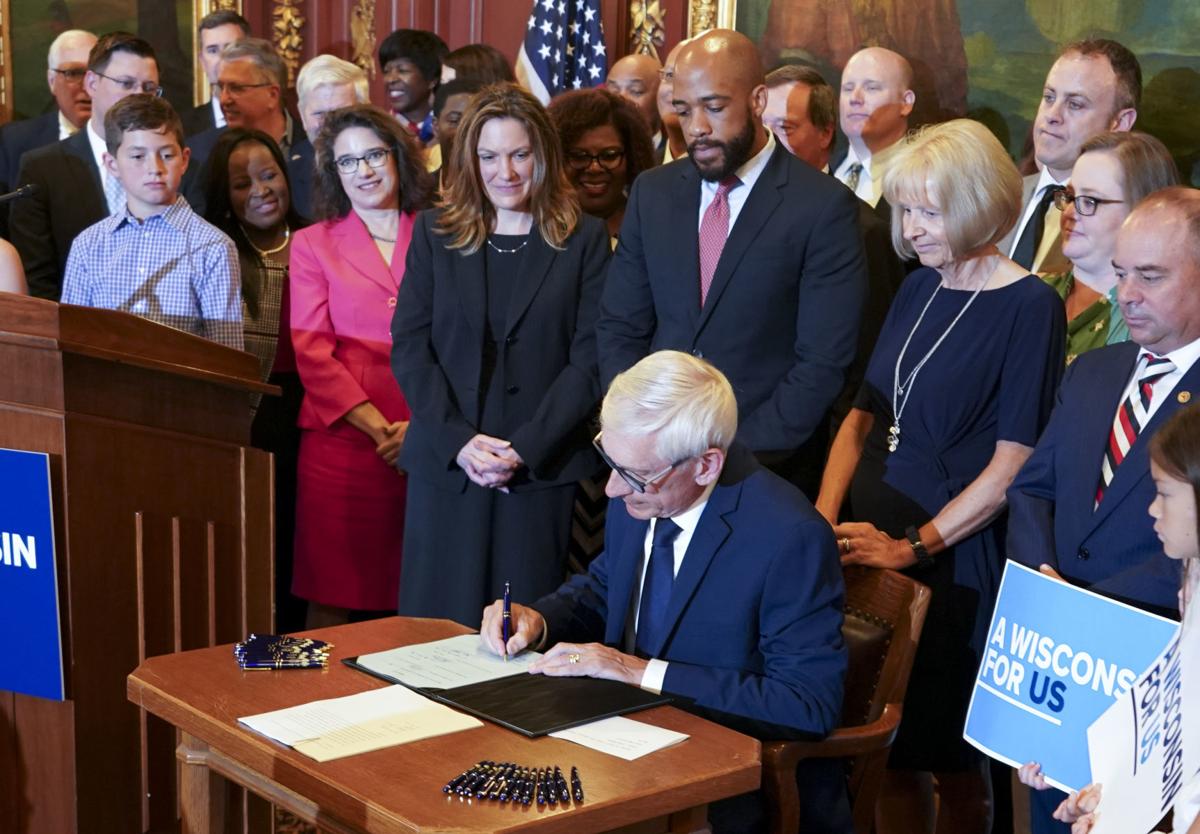 Gov. Tony Evers made 78 partial vetoes to the state budget passed by the Republican-controlled Legislature before signing it. The changes added a net $65 million to public schools and kept large trucking fees at current levels, among other things.

Evers eliminated several last-minute budget additions that would have allowed electric vehicle manufacturer Tesla to sell its cars directly to consumers, conducted a study on open road tolling, authorized a study on Capitol security in conjunction with the Madison Police Department and limited the number of hours security staff could protect Lieutenant Gov. Mandela Barnes.

Evers also jettisoned a provision that would have banned local governments from regulating quarries, which some fear would have taken away local control over frac sand mines.

“We were finally able to move the needle in the same Republican-controlled Legislature we’ve had for the past eight years,” Evers said at Wednesday’s budget signing at the Capitol.

After the budget signing, Senate Majority Leader Scott Fitzgerald, R-Juneau, downplayed the possibility of any attempts at overriding the vetoes. He said two areas Republicans might consider are the education funding increase and another veto that removed funding to implement work requirements and drug screening for FoodShare recipients.

A veto override would require the support of two-thirds of the members in both the Assembly and Senate. Republicans lack such majorities in both chambers and would need some Democratic support.

“This conservative budget crafted by the Republican Legislature deserved to be signed into law, but without the political, partial vetoes,” Vos said in a statement. “These vetoes remove dollars from important programs, give more spending authority to government bureaucrats, and allow people to cheat the system by not following the welfare reforms we passed.”

In all, the budget will cut income taxes for most earners, raise hundreds of millions of dollars to fund transportation and K-12 public education and pump about $200 million more into the state’s Medicaid program.

Vetoes by the governor also reduce the amount of money transferred from the general to the transportation fund and keeps in place current fees for heavy trucks, which were set to decrease from as much as $155 to $100 under the Republican plan for trucks weighing under 10,000 pounds.

Another one of the governor’s vetoes would use state funds from a $14.7 billion federal settlement with Volkswagen over allegations it cheated on emissions tests to provide $10 million for electric vehicle charging stations. Republicans wanted the funds to be used for the replacement of school buses.

The governor raised a certain category of K-12 education aid to $742 per student a year, costing $87 million more than what Republicans passed. Current law sets the annual amount at $630 and Republicans wanted to delete that number and increase the per pupil amount to $679. But Evers was able to un-delete part of the number “$630” with his partial veto and add $63 to $679 to create the new amount.

The move comes after the Wisconsin Association of School Boards suggested earlier in the week Evers use his partial veto authority to raise an additional $17 million on top of what the GOP plan provided for schools.

The governor reduced K-12 spending in other areas, in one instance by striking about $18 million in grant funding to schools to purchase personal computers. With Evers’ vetoes, new spending on public education amounts to about $570 million, as opposed to $505 million under the original Republican plan, according to the governor’s office. New spending for special education amounts to $97 million, increasing the state reimbursement rate to 30% by 2020.

Despite increases in education spending, the budget Evers signed falls short of his goals for the state to provide two-thirds of school funding and to rewrite the school-aid formula to deliver more funding to high poverty and rural school districts. Evers was unable to find a way using his partial veto authority to increase funding for special education.

Evers had originally proposed an influx of $1.4 billion over two years, which included a $606 million increase for special education.

Republicans offered only limited criticism of the education spending increase. Fitzgerald said he was concerned about the veto method, but was more disturbed by WASB suggesting vetoes publicly.

“(Evers) basically signed a Republican version of the budget today,” Fitzgerald said. “There’s a list of items (Evers changed), but none of them jump out at me so significant that I think you could make the case that he really changed the document that we passed.”

The governor also reduced funding to enforce work requirements and drug screenings championed by Republicans for the FoodShare public assistance program, which will make it more difficult for the state to implement such requirements. A DHS spokeswoman said adults with school-age children will be exempt from sanctions associated with the work requirements.

Evers in his veto message said he objected to the “burdensome requirements” Republicans in the state Legislature placed on low-income people and the “unrealistic” timelines to implement the programs.

Work requirements for FoodShare recipients, including able-bodied adults with children over the age of 6, were set to go into place in October under a bill passed by Republicans.

“Governor Evers seems intent on trapping people on welfare,” he said. “Because of his partial vetoes, he’s starving programs that incentivize work, undermining their implementation and skirting the law. We know people support drug testing and work requirements for welfare recipients and this budget ignores that fact.”

Evers got rid of money set aside to acquire land and proposals for a potential maximum security prison in Green Bay. The governor also used his partial veto authority to halt a Republican plan to gut $25 million in funding for new state-run juvenile corrections facilities, which Republicans wanted to fund later.

The governor also managed to provide an increased amount of state-supported borrowing — $59 million total — to complete an expansion of the Mendota Juvenile Treatment Center, as required under a state law that will shut down the embattled Lincoln Hills and Copper Lake youth prisons in 2021 and replace them with other state and county-run facilities.

But Evers, who called the Republican budget “insufficient” in meeting his goals for the state, kept in several marquee proposals included in the Republican plan, such as cutting the two lowest income tax rates, which would provide almost all earners an average tax cut of about $75 this year. Evers also signed a separate bipartisan bill providing a fix to a law allowing the state to collect sales tax from out-of-state sellers and apply the new revenue to an income tax cut.

Under the bill and the budget provisions, the average taxpayer can expect a total $124 annual income tax cut by 2020. Evers had wanted an income tax credit capped at those making $150,000 and providing the average recipient a savings of about $217, but Republicans discarded his plan to pay for it by rolling back a major tax credit for large manufacturers.

The amount of new transportation funding roughly mirrors Evers’ plan, but the governor had offered increasing the gas tax by about 10 cents per gallon as the funding mechanism.

Evers didn’t sign the budget without taking aim at what he thought to be its deficiencies.

“I believe the people of our state would have been better off in this budget if we could have found more common ground, even if it meant each of us not getting everything we wanted,” Evers said in his veto message. “But Republican leadership often chose political allegiance and scoring political points over the people of our state, and that is reflected in the budget that arrived on my desk.”

Evers in the veto message said he had seriously considered scrapping the budget in its entirety, something a Wisconsin governor has never done, but backed off of the idea because it would have “been more of the same divisiveness and petty, political theatrics that the people of Wisconsin have put up with for far too long.”

The plan leaves the state with a projected budget shortfall in 2023 of about $1.4 billion. The amount, known as the structural deficit, doesn’t take into account future revenue or spending changes in the next budget.

The governor's ability to raise $87 million with a few strokes of a pen has some critics again questioning whether such authority is appropriate.

The Republican Legislature seems to be composed entirely of sore losers.

Using some of the most powerful veto powers in the nation, Wisconsin Gov. Tony Evers was able to add about $80 millions for public education t…

The Wisconsin Institute for Law and Liberty is asking the conservative-dominated Wisconsin Supreme Court to re-examine its precedent on gubernatorial veto authority.

Republicans cut Medicaid expansion from the proposed state budget and most have opposed the move since it became possible in 2014.

The proposal is part of a broader plan to build replacements for the embattled Lincoln Hills and Copper Lake youth prisons in northern Wisconsin, which are slated for closure in 2021.

Gov. Tony Evers, a Democrat who took office this year, tried to block the work requirement but the Republican-controlled Legislature kept it.

Lawmakers and legislative fundraising committees took in more than $2 million in contributions from special-interest groups as they crafted the 2019-21 biennial budget, according to a report from Wisconsin Democracy Campaign.

Gov. Tony Evers addresses the media and others at the state Capitol Wednesday before signing the two-year budget. Although the spending plan was largely the work of the Republican-led Legislature, the Democratic governor was able to remake parts of it through extensive use of his veto pen.

Gov. Tony Evers made 78 partial vetoes to the state budget passed by the Republican-controlled Legislature before signing it. The changes added a net $65 million to public schools and kept large trucking fees at current levels, among other things.