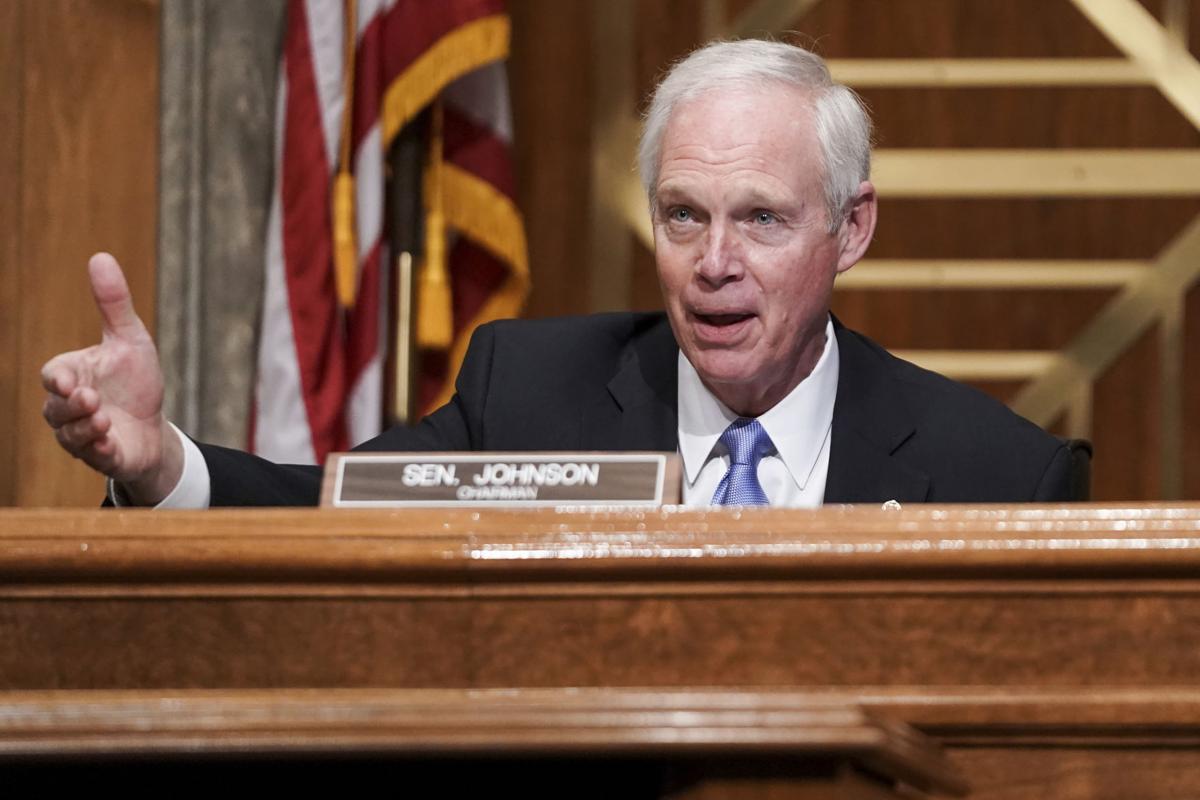 Sen. Ron Johnson, R-Oshkosh, continued to question the legitimacy of the election last week during a hearing on Capitol Hill in Washington. 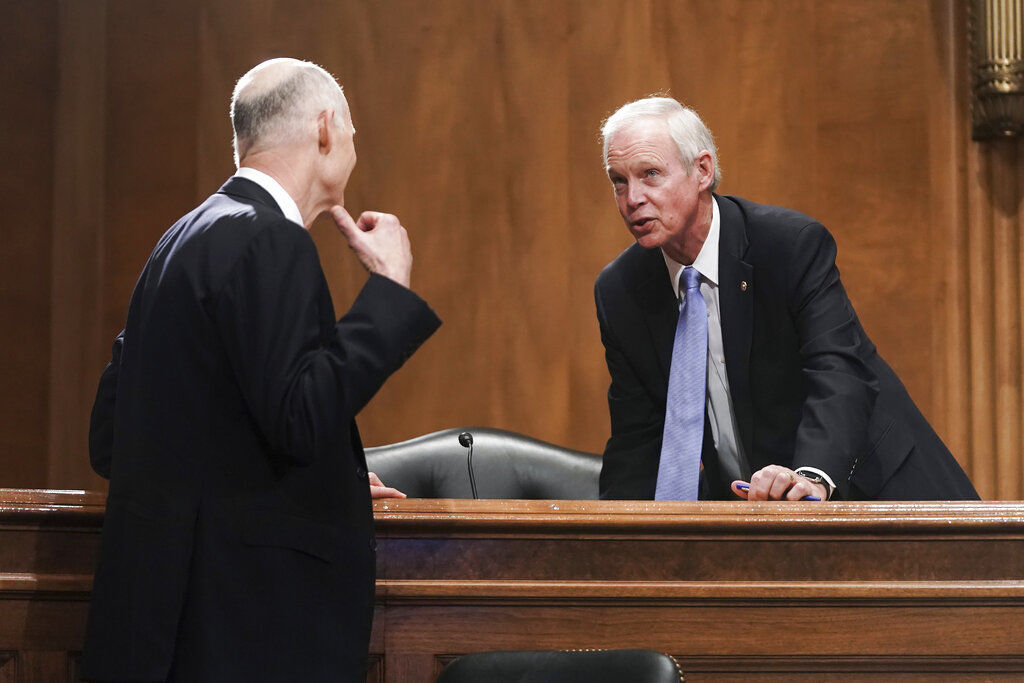 A decade ago political newcomer Ron Johnson rode a tea party wave to Washington where he quickly forged a reputation as a straight-talking, goal-oriented conservative with a focus on facts and figures.

But in recent years, Johnson — now the de facto leader of the Wisconsin Republican Party as the only remaining statewide officeholder — has increasingly relished his role as a leading Senate contrarian and defender of President Donald Trump.

Over the past year, rather than using his position as head of the Senate Homeland Security and Government Affairs Committee to investigate foreign election interference or the government’s botched response to the pandemic, Johnson has aired unproven and potentially harmful COVID-19 and presidential election conspiracy theories.

Johnson hasn’t decided whether he’ll seek another Senate term or perhaps run for governor in 2022. The former Oshkosh plastics executive during his 2016 campaign said he wouldn’t seek a third term, but he has more recently reopened that possibility.

If he does run, it’s likely Trump’s base will be critical to his success, which may explain the method to his MAGA-ness.

Becker, a Trump critic who recently wrote about a conversation he had with Johnson in which the senator expressed awe at Trump’s base of support in the state, said it’s clear Washington has changed Johnson.

“When he got to the Senate, he said the biggest issue in our country was the national debt — he talked just about more mainstream issues,” Becker said. “For these last four years, all he’s focused on is the conspiracy wing of Donald Trump’s Republican Party.”

Other Republicans, however, say Johnson’s contrarianism is wholly self-made and politically advantageous.

“He’s obviously proven over the years he’s not afraid of taking on any issue,” said Republican strategist Brandon Scholz. “I think people get frustrated and upset with Senator Johnson at times because he kind of marches to his own drum and his own tune.”

Amendment to Foxconn's contract could come with reduced tax credits

If Johnson runs for office in 2022, some strategists say his work in the Senate in recent years catering to Trump-style diversions, such as an investigation into Hunter Biden’s business dealings, could set him up for a path to victory mirroring Trump’s 2016 success in Wisconsin.

For Johnson, who declined an interview request for this story, his hearings are a way to provide more transparency for the public and to combat what he views as closedmindedness from the media, Democrats, the medical community and even the judicial system to important topics.

“This hearing should not be controversial,” Johnson said last week during a hearing that amplified disproven claims of election fraud. “It really shouldn’t be. This is something we all should want to restore the confidence in our election system.”

“When is this nonsense detrimental to our democracy going to end?” Schumer said. “To use a Senate committee to spread misinformation about our own elections, it’s beyond the pale.”

After the Electoral College affirmed President-elect Joe Biden’s win, Johnson told the Milwaukee Journal Sentinel he believed the result of the presidential election was legitimate, but that he wanted to move forward with the hearing on election “irregularities” because there are “legitimate questions” about the way the election was administered in Wisconsin and elsewhere.

Dozens of judges, including in the highest U.S. and Wisconsin courts, all disagreed, and a former federal cybersecurity official said during last week’s committee hearing that “continued assaults on democracy and the outcome of this election” are “ultimately corrosive to the institutions that support elections.”

Still, Johnson pressed his case during the hearing.

Besides the elections hearing, Johnson recently organized a hearing giving a platform to doctors who promoted unproven alternative treatments to COVID-19 that haven’t been accepted by the broader medical community.

Last year, Johnson was briefly implicated in the Trump impeachment saga when the U.S. ambassador to the European Union, Gordon Sondland, told him that aid to Ukraine was tied to Trump’s request to have Ukraine undertake investigations related to the 2016 U.S. elections.

Johnson also reportedly met with a former Ukrainian official over the summer to discuss unsubstantiated claims that Ukraine aided Hillary Clinton’s 2016 bid for the presidency.

Johnson’s critics say his increasing involvement in such topics is a far cry from candidate Johnson in 2010, when his primary focus seemed to be attuned to the budget and national debt, though Johnson drew attention last week for blocking an effort to send a second round of $1,200 stimulus checks to the public, arguing coronavirus relief needs to be more targeted.

Becker, the former Brown County GOP chairman, said Johnson made his conspiratorial debut in 2016 when he questioned former Secretary of State Hillary Clinton about the Benghazi attacks, to which she replied, “What difference, at this point, does it make?”

Earlier this month after speaking to Johnson in private, Becker wrote in the The Bulwark — a conservative, anti-Trump publication edited by Charlie Sykes, who promoted Johnson as a Milwaukee radio host a decade ago — that Johnson “knew and accepted” Biden won, but feared calling out Trump’s falsehoods. Becker concluded that Johnson believes it would be “political suicide” to oppose Trump.

UW-Madison political science professor Barry Burden said Trump has clearly proven popular in the state, even though he lost this year.

“There is a pretty big coalition of voters in Wisconsin who are attracted to Trump’s style and to his messages,” Burden said. “It looks like Johnson is kind of mimicking that style in pursuing these odd or peripheral stories, so maybe it’s possible to assemble that Trump coalition even after Trump’s out of office.”

“I think it is genuine insofar as this is who Senator Johnson is,” Zepecki said.

Zepecki said the real story of Trump’s effect on Johnson has been how much Trump’s Washington has changed him to increasingly become someone willing to dive headfirst into Trumpian political diversions.

“Instead of working for us, Senator Johnson is spending his time and our tax dollars promoting baseless conspiracy theories and now holding a hearing in Washington, D.C., on non-existent voter fraud,” Mitchell said.

If he runs for Senate in 2022, Johnson could also face questions over his pledge in 2016 not to seek another term if he won re-election that year.

Outagamie County Executive Tom Nelson, the only Democrat so far who has announced his 2022 bid for the Senate, said he believes Johnson’s position as the standard bearer of Trumpism is a losing formula given Trump’s loss by about 20,600 votes in the state.

Nelson said his own focus on addressing COVID-19 and other issues hitting close to home will help him win over independent voters that may have previously been persuaded by Johnson.

“He’s chasing these bizarre conspiracies, that’s what’s consuming his time, and people don’t care about this,” Nelson said. “He’s completely out of touch.”

It goes without saying this year has been a whirlwind, and it’s not even over yet. The COVID-19 pandemic has presented our state and country with one of the foremost crises of the past century.

While some crises in our history managed to unite the nation, the story of this year’s crisis is much different. COVID-19 and the response to it have accelerated America’s and Wisconsin’s deep political divisions and leave our politics in a nearly constant state of disarray.

Here's a look back at some of this year's top stories in state government and politics.

With this year’s campaign for state Supreme Court, Wisconsinites got an early taste of the heated rhetoric that would be commonplace in the pr…

One of the most bizarre stories I’ve written this year shows that you’ll never know what just might provoke partisan-fueled vitriol. In this c…

For me, writing this story was when it became clear the COVID-19 pandemic was truly serious and here to stay. It also marked a short-lived sta…

The high court’s landmark action striking down Gov. Tony Evers’s statewide public health order threw into sharp relief the extent to which the…

Wisconsin giveth, and Wisconsin taketh away. In perhaps the biggest state political story of the year, Wisconsin revoked the support it gave P…

The state expects to receive a second batch of the Pfizer vaccine next week, but Department of Health Services Secretary Andrea Palm said it may potentially be smaller than the 49,725 doses received this week.

Conservative Justice Brian Hagedorn again sided with liberals as the Wisconsin Supreme Court on Tuesday delivered a setback for opponents of local COVID-19 mitigation efforts by rejecting a request to immediately review a challenge to Dane County’s indoor gathering ban.

Democrat Joe Biden defeated Trump by 0.6 points in Wisconsin in the Nov. 3 election, a key victory that helped propel Biden to the White House.

The pandemic has forced candidates to find solutions for the annual December process of collecting enough signatures to appear on the ballot, especially for those seeking the open state superintendent seat in the April 6 election.

President Joe Biden will travel to Milwaukee next Tuesday, marking one of his first trips to a state since taking office.

Sen. Ron Johnson, R-Oshkosh, continued to question the legitimacy of the election last week during a hearing on Capitol Hill in Washington. 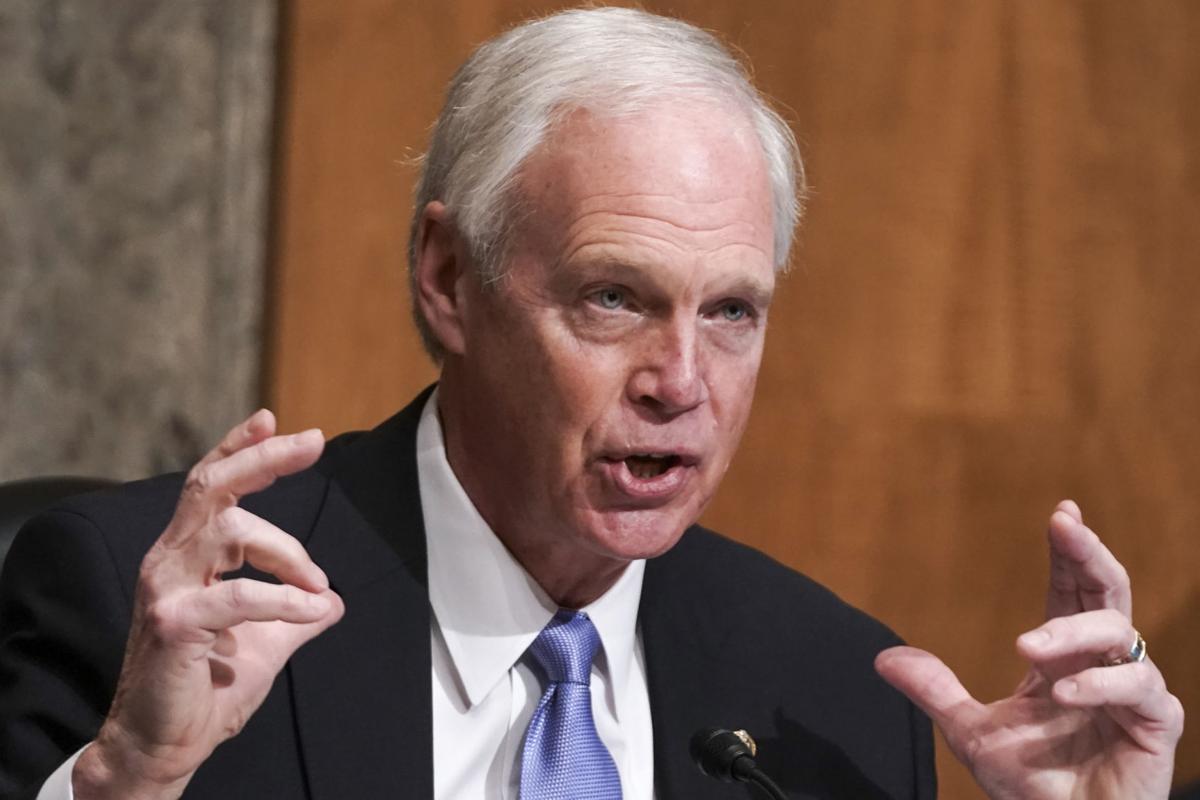