The Wisconsin Supreme Court on Friday ruled the state does not need to purge from the voter rolls about 70,000 people identified in 2019 as potentially having moved — a win for Democrats who vigorously opposed the move pushed by Republicans.

The controversial voter rolls case has worked its way through the court system since late 2019, with the Supreme Court deciding to take it up in June.

The court ruled 5-2 to side with a court of appeals decision to not require that the Wisconsin Elections Commission remove the voters from the rolls. Conservative Justices Brian Hagedorn and Patience Roggensack, and liberal Justices Ann Walsh Bradley, Rebecca Dallet and Jill Karofsky joined to form a majority.

In doing so, they reversed an Ozaukee County Circuit Court judge’s 2019 ruling ordering the Elections Commission, which helps oversee elections in the state, to deactivate thousands of registered voters who were flagged by a nationwide database as potentially having moved. The Supreme Court ordered the case dismissed.

Hagedorn, who wrote the majority opinion, said Wisconsin law gives local election officials, not the state commission, the ability to change a voter’s registration status and chided the plaintiff in the suit for bringing legal arguments he said ran counter to a plain reading of the law. 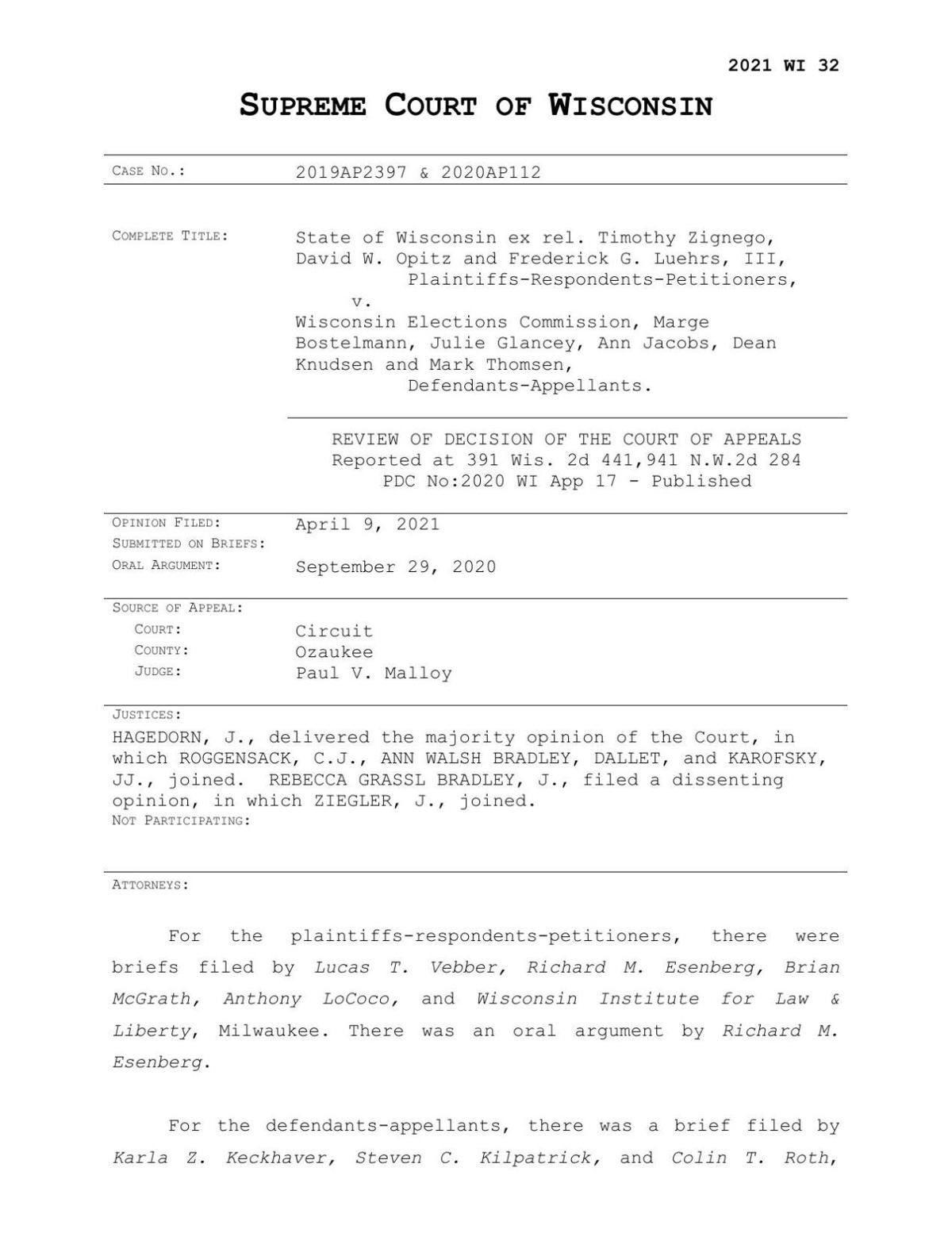 “As the surrounding context, definitions, and text make clear, these duties are the responsibility of municipal clerks and a municipal board of election commissioners. The Commission has no mandatory duties under (state law), and therefore cannot be compelled to act,” Hagedorn wrote, adding that the plaintiff’s legal argument disregards nearly every foundational principle of statutory interpretation.

Conservative Justices Rebecca Bradley and Annette Ziegler dissented. Bradley, in countering the majority opinion, wrote the Wisconsin law provision that states the Elections Commission is “responsible for the design and maintenance of the official registration list,” among other things, dictates the commission should purge the voters.

The case was brought by plaintiffs represented by the conservative Wisconsin Institute for Law and Liberty (WILL). Republicans wanted the Supreme Court to purge voters suspected of moving in order to maintain clean voter rolls. WILL argued the state should keep its voter rolls orderly by removing voters who may no longer reside at the addresses indicated on their voter registrations.

In a statement, WILL president and general counsel Rick Esenberg said it’s now up to the Legislature to change state law to deactivate from the rolls voters flagged as having moved.

“This is a disappointing setback for those who expect Wisconsin state agencies to follow the law,” Esenberg said. “The court held today that the Legislature created a duty and failed to provide an effective way for that duty to be carried out or enforced by voters. We respectfully disagree.”

The Elections Commission, represented by the state Department of Justice, argued it was under no duty to treat as reliable the information it received about voters who may have moved.

“As today’s decision explains, the argument in this case that the Wisconsin Elections Commission had a duty to deactivate many registered voters was based on a ‘plainly incorrect’ reading of the law. This decision is a clear win for Wisconsin voters,” Democratic Attorney General Josh Kaul said in a statement.

More than 232,000 voters were initially identified in 2019 as potentially having moved. The Elections Commission wanted to wait until after the presidential election before removing anyone because of inaccuracies found while previously attempting to identify voters who may have moved.

Nearly 17,000 people on the list had not moved and registered at their same address, more than 7% of the total, a commission report found.

Republicans had pushed for the state to deactivate voter registrations for everyone on the list who did not respond within 30 days to a postcard notifying them they had been flagged as potentially moving. But because the voter list included more people from Democratic-leaning areas, Democrats said the lawsuit was aimed at lowering turnout on their side.

A post-election report compiled by the Elections Commission found the number of voters initially identified as possibly having moved in Wisconsin shrunk by two-thirds before the November presidential election, and none of the people still on the list cast ballots in 2020.

In October, the Elections Commission sent a letter to about 234,000 voters it identified as potentially having moved. It asked those voters to update their voter registrations if they moved or notify elections officials if they still reside at the same address. Because some of the voters flagged as having moved in a 2017 mailing never actually did, the commission opted to wait as long as a couple of years to deactivate the registration of voters who didn’t respond to the October mailing.

Voters suspected of moving have continued to update their addresses with the state, lowering the total number of people who haven’t responded to the mailing. About 58% of the people initially placed on the list registered at a new address; 4% were deactivated by local clerks because they had moved or died; and 31% remain on the list.

Elections officials sent the letters based on information obtained through the nonprofit Electronic Registration Information Center, or ERIC, which flags potential movers. The commission reviews the information to ensure accuracy.

ERIC obtains data from a variety of sources to flag voters who may have moved, such as Wisconsin motor vehicle records, voter registration and motor vehicle records from participating states, along with the National Change of Address database from the U.S. Postal Service.

Missouri man forgot gun was in bag as he tried to board plane at Dane County Regional Airport, authorities say

The Missouri man was very upset when the gun was discovered in his bag while going through security and was “completely cooperative,” the Dane County Sheriff’s Office reported.