The court refused to exercise its own jurisdiction over the recent public health order, instead leaving it up to the state’s lower courts to consider any future legal challenges first. 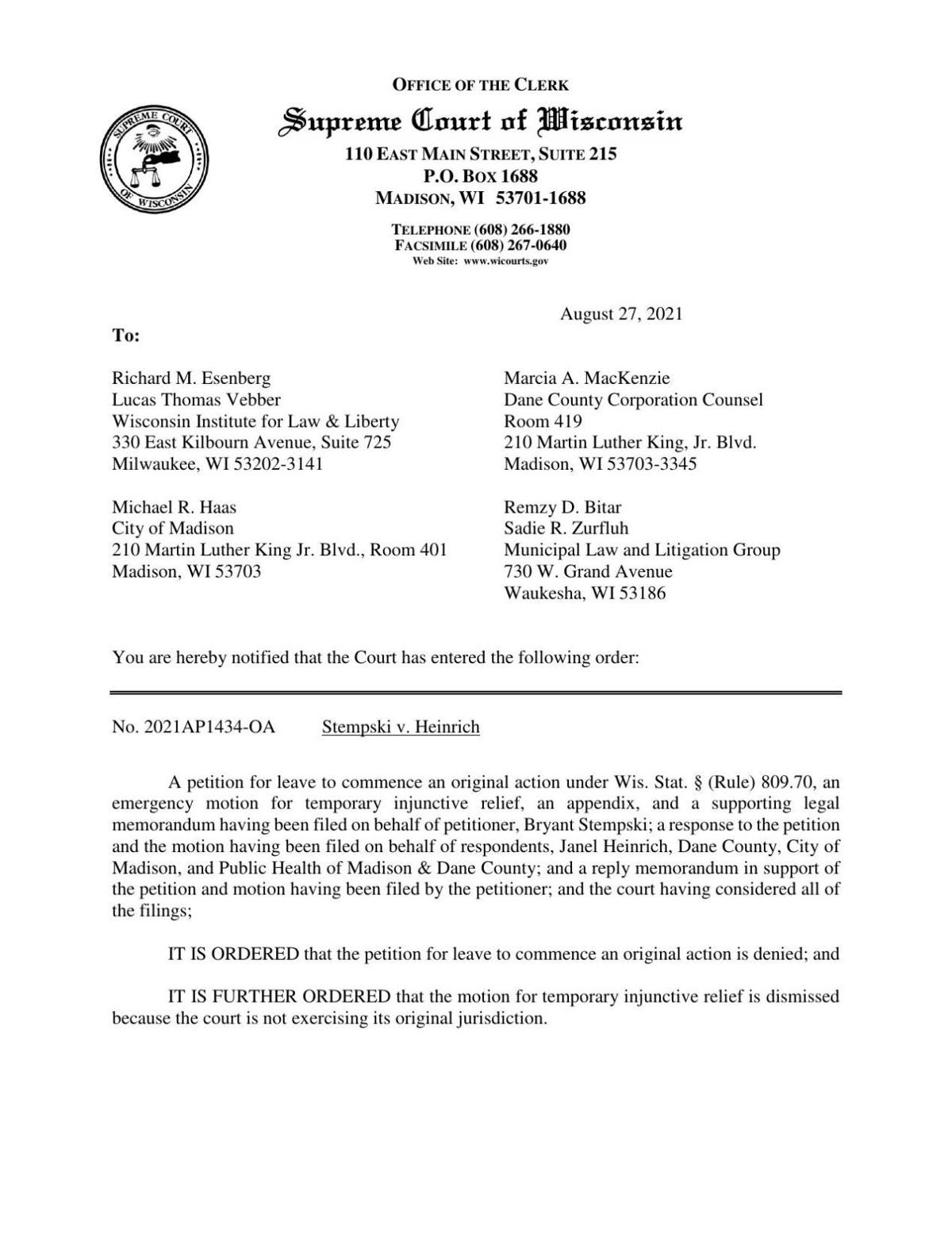 The Wisconsin Institute for Law and Liberty challenged the mask mandate in a lawsuit on behalf of Sun Prairie resident Bryant Stempski against Dane County and Madison, their joint public health department, and the department’s director, Janel Heinrich, asking the court to “declare the relevant county and city ordinances unconstitutional,” according to court documents.

WILL claims that previous rulings by the court limit the powers of local public health officers and a mask order like the one issued in Dane County must be approved through legislative action.

Under Dane County’s order, everyone age 2 and older must wear a face covering when in any enclosed space open to the public where other people, except for members of the person’s own household, could be present. The mandate remains in effect until Sept. 16.

The four justices in the majority did not provide further elaboration on the court’s order. The three dissenting justices, all conservatives, argued the court had refused its responsibility to determine “what the law is” and what authority public health officials have to issue compulsory mandates.

“The court’s failure to act in this case deprives the entire state of any timely resolution of the important issues presented,” Justice Rebecca Bradley wrote in her dissent.

Despite Friday’s ruling, the state’s highest court has gone against previous pandemic restrictions and mitigation efforts. The court’s conservative majority struck down Gov. Tony Evers’ COVID-19 emergency order and statewide mask mandate in April. Another ruling in June determined that public health officials do not have the authority to close schools.

The three dissenting justices included Chief Justice Annette Ziegler and justices Bradley and Patience Roggensack, who wrote separately from the other two. The majority included liberal justices Ann Walsh Bradley, Rebecca Dallet and Jill Karofsky and conservative Brian Hagedorn, who has been a swing vote on previous COVID-related court cases.

What do we know about MMSD’s return to school?

Officials answered questions from the press on Friday morning about the start of Madison schools next week.

Brian A. Lins was arrested after a Madison resident identified him as the "prowler" that had been seen in the neighborhood.

The victim of Friday's fatal crash in Green County was identified as 25-year-old Tyler H. Hodgson.

The new order extends the mandate, which was set to expire next week, until Oct. 8.