The Wisconsin Supreme Court on Wednesday struck down Gov. Tony Evers’ latest COVID-19 emergency order and accompanying statewide mask mandate, handing the Democratic governor a significant setback in his ability to contain the disease even as cases tick back up.

The court ruled Evers exceeded his authority by issuing multiple emergency orders in response to what it said was effectively the same emergency.

The ruling bars the governor from issuing a new mask mandate as he did the last time it was tossed, by the Republican-led Legislature. The latest order was set to expire on Monday.

Local governments, such as cities and counties, are still free to impose their own virus restrictions, and Dane County’s mask mandate remains in place. 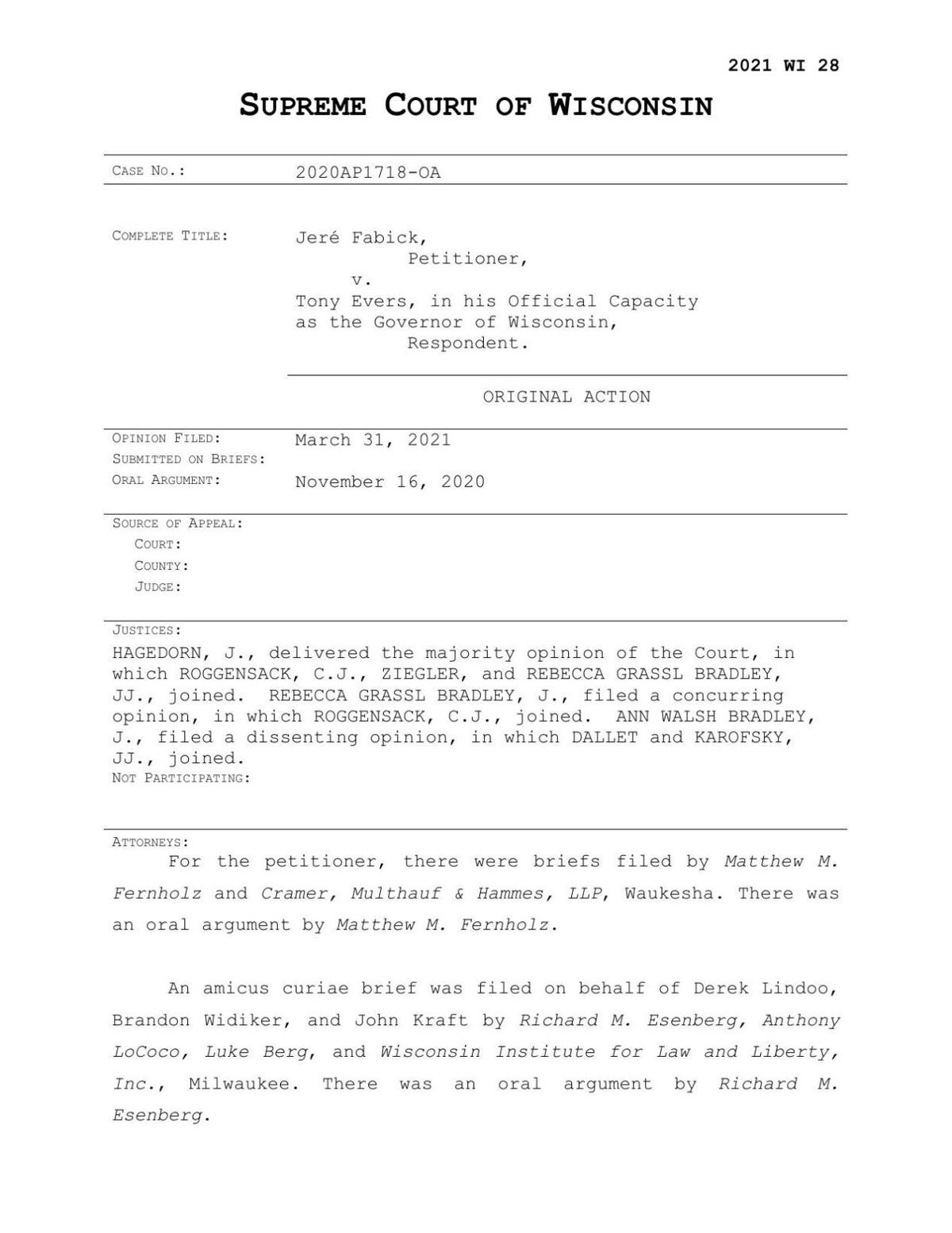 The court’s 4-3 ruling, with conservative swing Justice Brian Hagedorn joining the conservative majority, follows a pattern of skepticism the state’s highest court has exhibited toward the governor’s mitigation efforts since the pandemic began.

Hagedorn delivered the majority opinion, writing that Wisconsin law gives Evers extraordinary powers for only a short duration — 60 days — after the declaration of a public health emergency.

“The plain language of the statute explains that the governor may, for 60 days, act with expanded powers to address a particular emergency,” Hagedorn wrote. “Beyond 60 days, however, the legislature reserves for itself the power to determine the policies that govern the state’s response to an ongoing problem. Similarly, when the legislature revokes a state of emergency, a governor may not simply reissue another one on the same basis.”

Republican lawmakers, who voted in February to repeal Evers’ mask mandate prompting him to issue a new one, praised the ruling.

“Today’s ruling vindicates the Legislature as a co-equal branch of government and will expand freedom and opportunity for the people of Wisconsin,” Senate Majority Leader Devin LeMahieu, R-Oostburg, said in a statement. “As we work to fully and safely reopen our state, we trust our residents to follow CDC guidelines when appropriate, get vaccinated when ready, and always employ common sense.”

Evers called on Wisconsinites to continue wearing masks, which have been shown to slow the spread of the virus that has killed more than 6,600 residents so far.

“Since the beginning of this pandemic, I’ve worked to keep Wisconsinites healthy and safe, and I’ve trusted the science and public health experts to guide our decision making,” Evers said. “Our fight against COVID-19 isn’t over. While we work to get folks vaccinated as quickly as we can, we know wearing a mask saves lives.”

The lack of an emergency order threatens federal COVID relief funding for the state, according to the nonpartisan Legislative Fiscal Bureau, which said Wisconsin stands to lose nearly $50 million per month in FoodShare assistance without a COVID-19 emergency declaration in place.

Since the start of the outbreak, Evers has issued several public health emergencies and a series of related orders. His first mask order took effect in August and has been reissued four times since then, most recently on Feb. 4 immediately after Republican legislators repealed it.

The case was brought by Jere Fabick, president of a multi-state Caterpillar equipment and engine dealer and a board member and policy adviser for The Heartland Institute, a free market think tank.

Fabick is also a major Republican donor, having given more than $350,000 to Republican or conservative candidates in Wisconsin between 1994 and 2020, according to the Wisconsin Democracy Campaign. In 2016, Fabick gave $20,000 to conservative Wisconsin Supreme Court Justice Rebecca Bradley.

In addition to seeking to overturn Evers’ public health-related emergencies, the case challenged the governor’s limits on public gatherings and capacity restrictions in bars, restaurants and stores. Those limits are no longer in effect, however, after an appeals court put them on hold. The Supreme Court declined to take up that case, so there are no statewide capacity limits, although some local restrictions remain in place, including in Dane County.

Wisconsin law limits public health emergencies to 60 days, although the Legislature can extend them. Evers has issued new health emergencies, reasoning that the challenges caused by the pandemic have changed since March.

Fabick argued because the circumstance necessitating the public health emergencies — the COVID-19 pandemic — remains the same, Evers has impermissibly extended the state of emergency well beyond the 60 days permitted by the law.

The governor has questioned whether Fabick could bring such a challenge to the Supreme Court on the grounds it was a political dispute. Evers further argued state law allows governors to declare multiple states of emergency based on different occurrences stemming from the same underlying cause, such as a pandemic.

In her dissent, Justice Ann Walsh Bradley, joined by liberal justices Rebecca Dallet and Jill Karofsky, wrote that the court should not have granted Fabick standing in the case. She also wrote that the majority went too far when it struck down the governor’s latest emergency order from February because Fabick didn’t specifically ask the court to do that.

Walsh Bradley additionally concluded the court should have deemed Evers’ emergency orders lawful because they were issued in response to changing circumstances, even though they were caused by the same underlying pandemic.

“Unfortunately, the ultimate consequence of the majority’s decision is that it places yet another roadblock to an effective governmental response to COVID-19, further jeopardizing the health and lives of the people of Wisconsin,” she wrote.

Democratic Gov. Tony Evers hasn’t announced whether he’s running for re-election in 2022, but on the Republican side, the race may already be heating up.

James A. Peterson, 52, was arrested on the 1400 block of Wayridge Drive Wednesday morning on a tentative charge of threats to law enforcement.

The westbound Beltline ramp to Todd Drive will be closed as of 6:30 p.m. Monday until April 26.

Gov. Tony Evers' attorneys said Wisconsin taxpayers shouldn't foot the bill for having to defend against the election lawsuits.

Republican lawmakers introduce legislation to direct use of stimulus funds

Gov. Tony Evers currently has discretion over the use of the more than $3 billion directed to the state.

The all-you-can eat buffets, salad bars and build-your-own Bloody Mary bars are back.

"This was an own-goal, we're unhappy about it, and we owe an apology to Representative Pocan," Amazon said about its response to a comment Pocan made last week about workers needing to "urinate in water bottles."

The Wisconsin Supreme Court declined to hear a lawsuit, in a 4-3 decision Friday, brought by a conservative businessman against the Wisconsin Elections Commission in an effort to halt the use of absentee ballot boxes in cities and towns across the state in future elections.