The Wisconsin Supreme Court heard arguments Tuesday about whether Dane County can require special insurance to allow a Canadian pipeline company to triple the flow of crude oil across Wisconsin.

In 2017, Enbridge Energy completed a $1.5 billion upgrade to triple the capacity of its Line 61. As part of the project, the company needed a conditional use permit to build a pumping station, which Dane County granted on the condition that Enbridge carry extra spill insurance.

But state lawmakers intervened on behalf of the company, passing a law that banned counties from requiring special insurance.

The case has been tied up in the courts ever since, with Enbridge seeking to strike the insurance requirement and the county fighting for local powers.

“What import should I give to a county agency that knowingly, with advice of counsel, violated state statute? If every county (did that) where would we be?”

The Supreme Court is attempting to answer whether the county, while conceding that state law prevents it from enforcing the insurance requirement, can still include that requirement as a condition of the permit. But there are also questions about whether Enbridge actually has the insurance it needs for the pipeline.

The 42-inch pipe went into operation in 2009 and is one of three Enbridge lines carrying Canadian tar sands oil from Superior to a terminal in Illinois.

In 2014, Enbridge sought a conditional use permit for a new pumping station in the town of Medina as part of the project to expand Line 61 capacity to 1.2 million barrels per day.

The county’s Zoning and Land Regulations committee granted the permit but said Enbridge must carry a $25 million environmental liability policy to cover cleanup in the event of a spill like the one in 2010 that caused $1.2 billion in damage when an Enbridge pipeline ruptured in Kalamazoo, Michigan.

The county ultimately kept the insurance language, which Enbridge challenged in court. Meanwhile, a group of neighboring landowners filed their own case asking the court to enforce the insurance condition.

A lower court struck down the insurance requirement, but an appeals court later reversed that decision and sent the permit back to the county.

The appeals court ruled that a county cannot require additional insurance if a pipeline operator carries coverage for “sudden and accidental” pollution liability, as required by state law. But if the operator doesn’t have that insurance, the law doesn’t limit what the county may require.

The appeals court also ruled that the law can’t stop a county from requiring the pipeline operator to provide proof of insurance.

The company argues that the appeals court cannot send the permit back to the county to be redrawn and that the permit should remain in force without the insurance conditions that were struck down by the lower court.

“I don’t think there’s authority for that,” said Eric McLeod, the lead attorney for Enbridge. “The notion that Enbridge should be subjected to another permitting process … is incompatible with the nature of this proceeding.”

David Gault, Dane County’s assistant corporation counsel, has accused Enbridge of trying to “confound and confuse what is really a very simple and straightforward issue.” He argued Tuesday that by striking one part of the permit and allowing the rest to stand, the circuit court “effectively rewrote the permit.”

Gault argued there was only one permit — the one approved by the zoning committee on April 14, 2015.

“The statute wasn’t adopted until 3 months later,” he told the court.

Because the permit predated the new law, the county contends Enbridge must maintain the insurance coverage specified by the statute in order to be exempt from the county permit conditions.

But the county — and landowners — contend Enbridge has yet to produce any proof of insurance.

Justice Ann Walsh Bradley said the statute prohibits a county from requiring a pipeline company to obtain coverage — but doesn’t say anything about maintaining insurance.

Justice Daniel Kelly questioned why the county board didn’t send the permit back to the zoning committee to be revised. Gault said the county ordinance in place at the time didn’t allow the board to do a meaningful review.

“You’re asking us to do something the county board couldn’t do for itself?” Kelly asked.

“What import should I give to a county agency that knowingly, with advice of counsel, violated state statute?” she asked. “If every county (did that) where would we be?”

The line is currently transporting about 950,000 barrels per day but is ready to handle up to 1.2 million barrels once upstream projects are completed. That includes the controversial expansion of its Line 3 in northern Minnesota, which the company recently announced would be delayed by a year because of the permitting process.

Enbridge says expanding the Waterloo Pump Station did not heighten the risk of an oil spill in the area. Nevertheless, Smith said the company carries more than $900 million in commercial general liability insurance “that provides coverage in the event of a release.”

But the county notes that is less than the damages in the Michigan spill, where Enbridge was unable to recover an $85 million claim, and there are questions over whether the company’s policy covers environmental cleanup.

“Nobody has seen their policy,” said Patricia Hammel, the attorney for the landowners.

McLeod told the court Enbridge is not opposed to sharing coverage details with the county.

“They could have done that three years ago and we wouldn’t be here,” Hammel said.

Keith Reopelle and his wife live on a 40-acre parcel adjacent to the pipeline and are part of a group of neighboring landowners who sued to have the insurance conditions enforced.

Reopelle, the director of Dane County’s Office of Energy and Climate Change, worked on environmental issues for the nonprofit group Clean Wisconsin when he joined the lawsuit. While he is concerned about the climate implications of using more fossil fuels, Reopelle said that had nothing to do with wanting additional protection for the line.

“A lot of our property could be really destroyed by an oil leak out of that pipeline,” he said. “We just think it’s important that they have the resources and ... have the awareness and responsibility to act.”

“What import should I give to a county agency that knowingly, with advice of counsel, violated state statute? If every county (did that) where would we be?” —Chief Justice Patience Roggensack 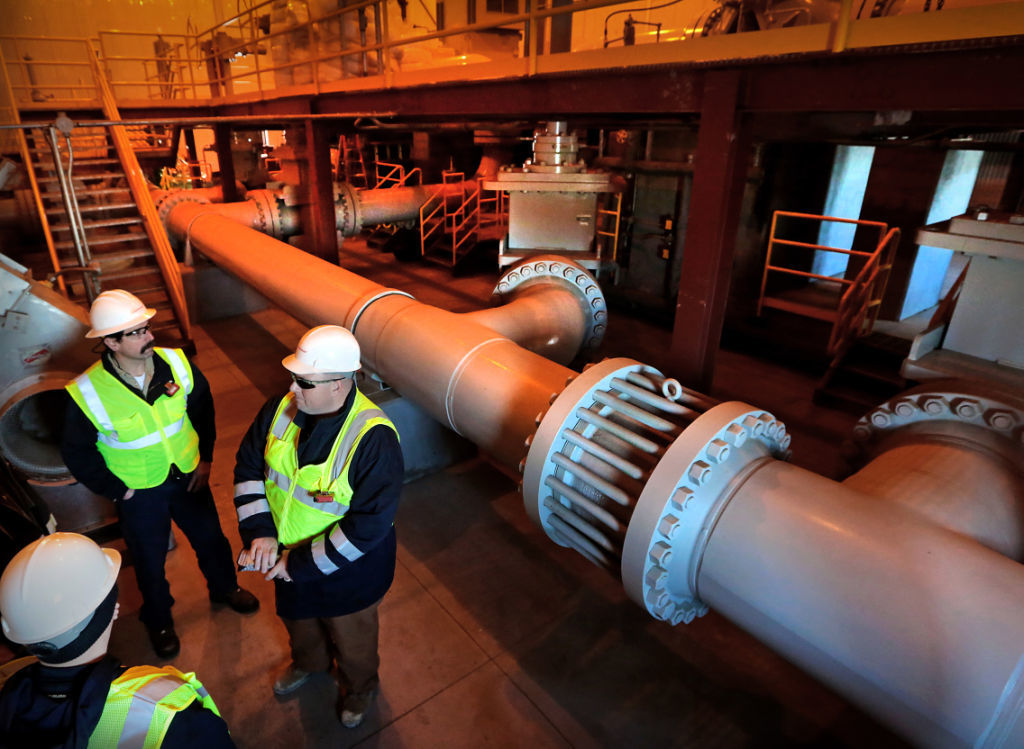 As part of an effort to sharply boost the flow of tar sands crude through Wisconsin,  Enbridge Energy built another pumping station adjacent to an existing facility in northeastern Dane County. In this 2015 file photo, Enbridge electrical technician Scott Welter, left, and technical supervisor John Schwarz have responsibilities at several Enbridge pump stations. 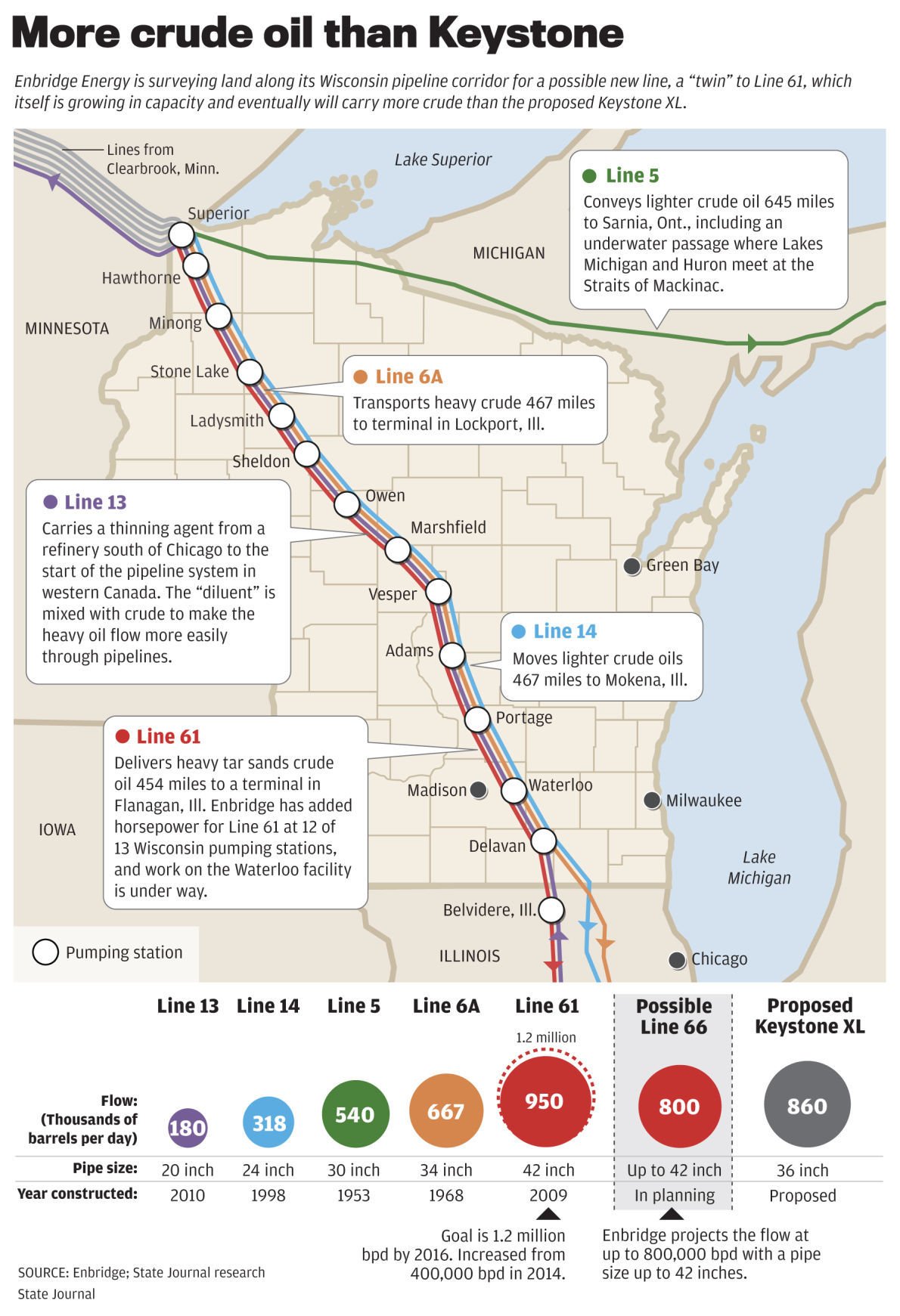 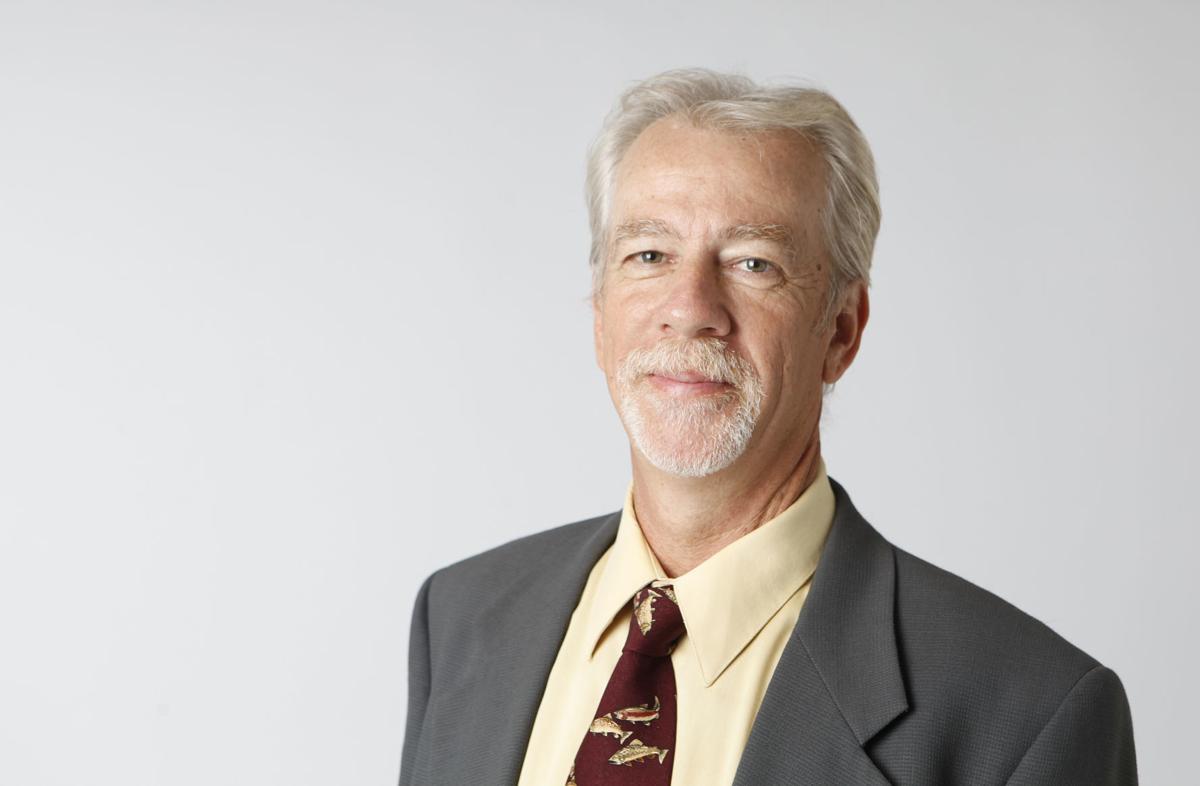