The Wisconsin Supreme Court handed a defeat to President Donald Trump on Thursday, declining to take up his case challenging Wisconsin’s election results but leaving the door open for Trump to file his challenge in circuit court.

In a 4-3 decision, the court denied immediate review of the case, with one of the court’s conservative-backed members, Justice Brian Hagedorn, joining the three liberal-backed justices.

After the court’s decision, the Trump campaign filed its case in Dane and Milwaukee counties. In following state law, Supreme Court Chief Justice Patience Roggensack consolidated the two cases in Milwaukee County Circuit Court and appointed Reserve Judge Stephen Simanek of Racine County to preside over the consolidated appeals, which could come back to the Supreme Court for final adjudication. But any court action would need to wrap up soon because Dec. 8 is the “safe harbor” deadline for each state to confirm which electors will cast the state’s votes in the Electoral College.

The Electoral College meets Dec. 14, and Congress will count its votes on Jan. 6.

The short timeline means Trump is close to exhausting his legal options in his attempt to overturn President-elect Joe Biden’s victory. Biden won Wisconsin with more than 20,600 votes. 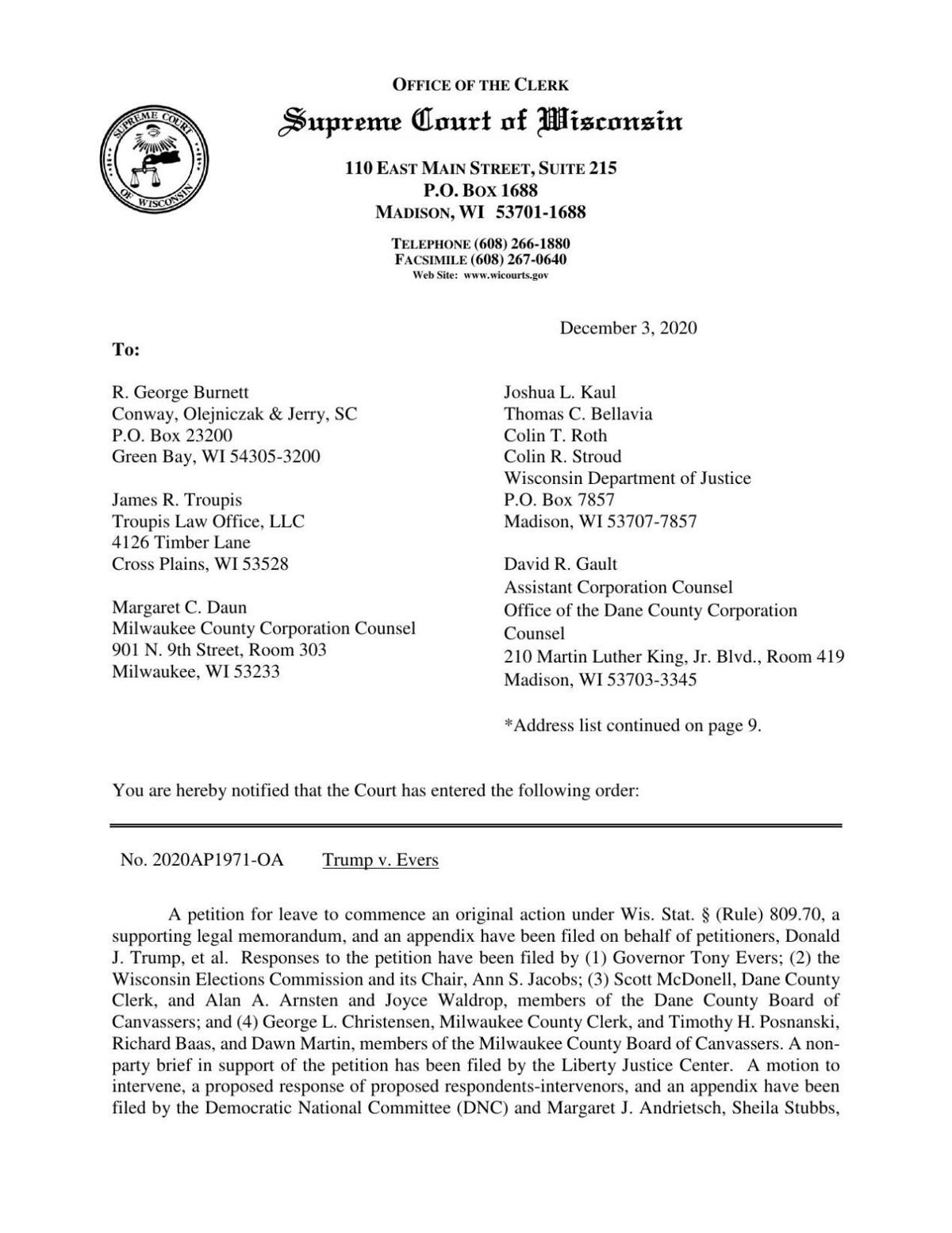 During a media call Thursday, Gov. Tony Evers said, “I was frankly amazed that it was not unanimous.”

In its order on Thursday, the justices denied the Trump campaign’s request to bypass the lower courts, as the Supreme Court has done for a variety of high-profile cases. But the court’s denial didn’t prevent the Trump campaign from filing suit in circuit court, where state law says election disputes should begin.

Even if the case were to come to the state Supreme Court again, Thursday’s order indicates it would be unlikely to toss any ballots.

Justices noted Trump’s case against the election results contains a multitude of assertions that would need to be verified in court, likely a time-consuming process.

In a statement, the Trump campaign said, “We welcome the direction of the Supreme Court to file in Dane and Milwaukee Counties as we pursue making certain that only legal votes count in Wisconsin — and we will immediately do so,” said Jim Troupis, Wisconsin counsel for the Trump campaign. “It was clear from their writings that the court recognizes the seriousness of these issues, and we look forward to taking the next step.”

There are still a number of other lawsuits in state and federal court that could potentially be determined on a faster timeline. Trump filed suit in the U.S. District Court for the Eastern District of Wisconsin on Wednesday asking that the Republican-controlled Legislature be given the authority to determine Wisconsin’s election results.

A legislative committee controlled by Republicans is set to hold a committee hearing next week that leaders have dubbed an “election investigation” to dive deeper into “thousands of complaints” surrounding the election. While the committee has the power to subpoena witnesses to appear, it does not have prosecutorial power.

Other lawsuits brought by Trump allies are pending in the state Supreme Court and in federal court but face an uphill climb to see any results. One, by state resident Dean Mueller that argued ballots placed in drop boxes set up by election authorities were illegal, was dismissed by the high court Thursday.

Both liberal and conservative attorneys have said courts would be unlikely to order any substantial changes to an election result after it has occurred if there wasn’t any substantial evidence of widespread voter fraud.

State elections officials have maintained that Wisconsin’s elections had no widespread fraud and were conducted according to the law and past practice.

The court’s three liberal-backed justices didn’t include any written explanation of their decision to deny review of the case; however, Hagedorn did, writing that the court would do well to follow the state law that directs circuit courts to be the first to hear election challenges.

“Following this law is not disregarding our duty, as some of my colleagues suggest,” Hagedorn wrote. “It is following the law. We do well as a judicial body to abide by time-tested judicial norms, even — and maybe especially — in high-profile cases. Following the law governing challenges to election results is no threat to the rule of law.”

Hagedorn said Trump’s court filings are heavy on fact-based allegations, something that circuit courts — not the Wisconsin Supreme Court — are designed to adjudicate. Once the facts are litigated in a lower court, the Supreme Court could step in to determine questions of law.

Trump filed the petition with the court on Tuesday, asking the justices to throw out some 221,000 ballots in Dane and Milwaukee counties deemed legal by municipal, county and state officials.

The campaign asked the court to nullify Gov. Tony Evers’ certification of the presidential election result and exclude vast swaths of ballots amounting to more than a quarter of the votes cast in the two counties. The challenged ballots include in-person absentee ballots without an associated written application, incomplete and altered absentee ballots, indefinitely confined absentee ballots and ballots collected at Madison’s Democracy in the Park event.

Roggensack, who wanted the court to take up the case, agreed the case involved facts that should be reviewed by a lower court. She said she would have ordered the circuit court to report its findings to the Supreme Court given the significant time constraints involved in the case.

She emphasized that just because the court denied the petition for immediate review of the case shouldn’t suggest Trump’s case is “false or not serious.”

“Nothing could be further from the truth,” Roggensack said. She said it’s important for the court to determine whether guidance handed down to voters by the Wisconsin Elections Commission challenged in the case should be reviewed by the court.

It appears that throwing out ballots, however, would be unlikely.

“The remedy (Trump and his campaign) seek may be out of reach for a number of reasons,” Roggensack said.

Fellow conservative-backed Justice Rebecca Bradley offered a forceful dissent criticizing the court for failing to immediately take up the case and determine questions of law. She didn’t rule out tossing ballots.

“The respondents implore this court to reject the challenge because, they argue, declaring the law at this point would ‘retroactively change the rules’ after the election,” she said. “It is THE LAW that constitutes ‘the rules’ of the election and election officials are bound to follow the law, if we are to be governed by the rule of law, and not of men.”

Acrimony: Some feel menace in post-election threats. A11

I was glad to see that the Wisconsin Supreme Court decided not to consider another one of President Donald Trump’s totally baseless lawsuits.

Still no sign of winter in forecast for southern Wisconsin

Quiet and seasonable weather with highs in the 30s and 40s should continue for the next week for southern Wisconsin, according to forecasters.

"This is a dangerous path we are being asked to tread," Justice Brian Hagedorn writes for the majority.

Explained: What to expect in Wisconsin's election lawsuits

It's going to be a busy week.

The effort may prove futile after the high court on Tuesday rejected a Republican attempt to reverse results in Pennsylvania.

"Federal judges do not appoint the president in this country," U.S. District Court Judge Pamela Pepper said. "One wonders why the plaintiffs came to federal court and asked a federal judge to do so."