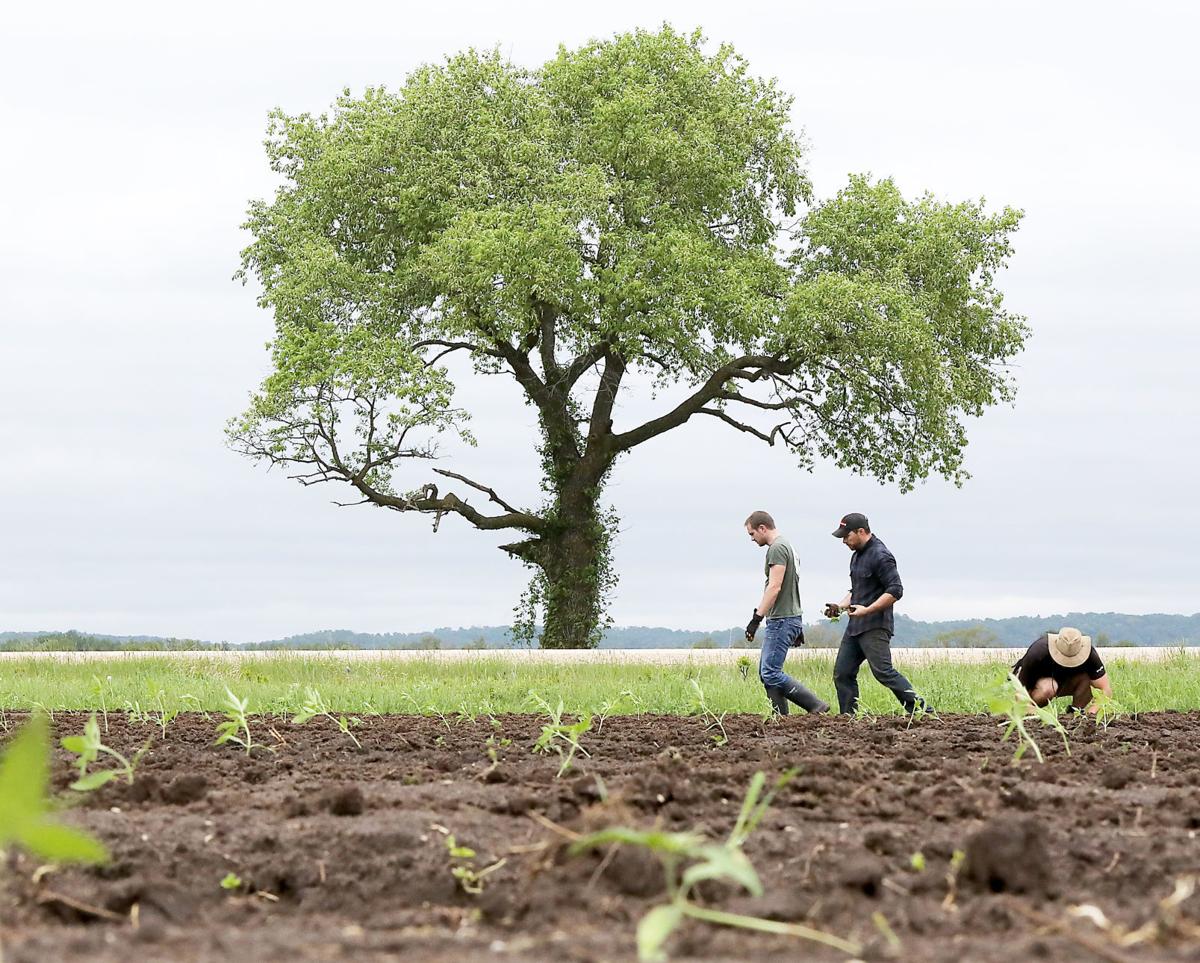 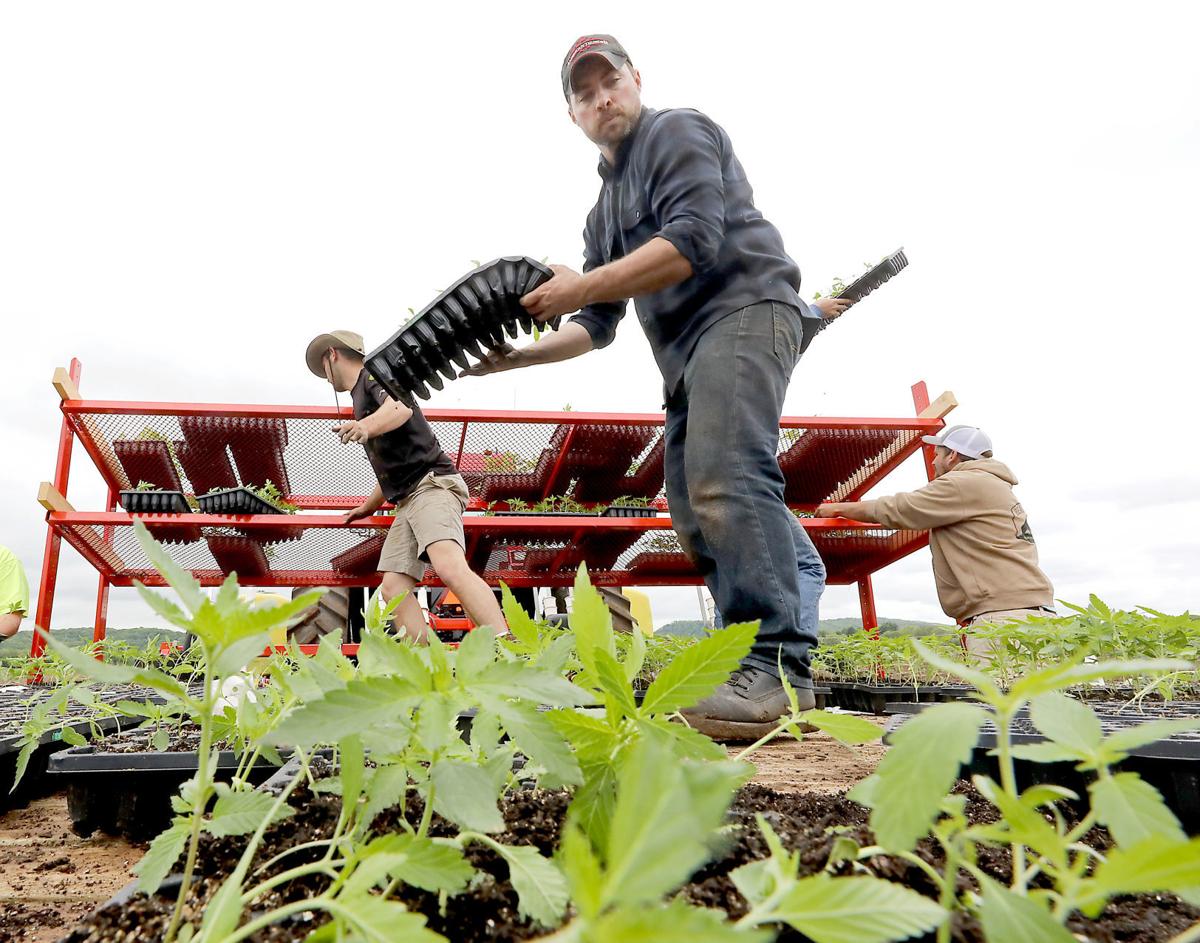 Mike Bindl, center, Sam Liegel, left, and Cody Pulvermacher help plant thousands of hemp plants in May on land near Arena for Driftless Extracts in Lone Rock. The plants will be used to extract cannibidiol, or CBD, that will then be sold in a dry form to manufacturers who will use it in oils, food and nutritional products. Driftless is also growing hemp for fiber and is building a processing facility. 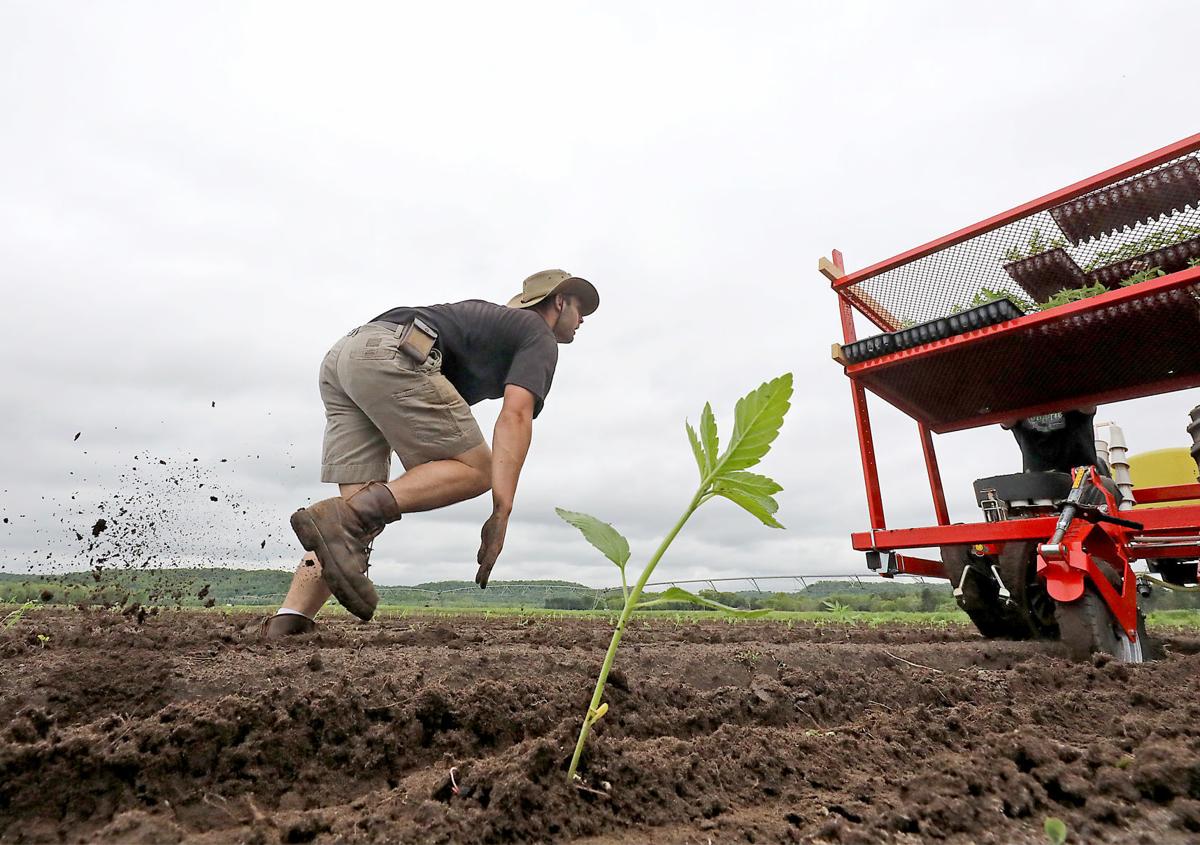 Sam Liegel, one of the founders of Driftless Extracts, trails a planting machine to make sure newly planted hemp seedlings are secured in dirt. At $1 per seed and a mature plant valued at $500, mistakes need to be kept to a minimum.

Lawmakers and industry officials hope to cultivate Wisconsin’s budding hemp industry until the state once again leads the nation in the plant’s production.

Officials say a key component of that plan includes proposed legislation to transition the state’s hemp program from a now two-year-old pilot project into a permanent one.

“I think now the legislation is in a good position to hopefully get scheduled for this fall session and it’s critical that this bill passes,” Sen. Patrick Testin, R-Stevens Point, said. “We want to make sure that Wisconsin’s hemp industry serves as the gold standard.”

Wisconsin’s first hemp crop was harvested in 1908. By 1920 the state had become the top hemp producing state in the nation, thanks to its humid climate and fertile soil, according to an August Wisconsin Legislative Reference Bureau report titled Regulating Wisconsin’s Hemp Industry.

The state would remain the top hemp producer until the 1950s, when production began to decline nationwide. In 1970, the federal government’s Controlled Substances Act identified marijuana — including hemp — as a Schedule 1 drug, thus prohibiting its production and use.

Hemp production wasn’t legalized again until the 2014 Farm Bill, which allowed states to create pilot programs to study industrial hemp. However, the plant still was classified as a Schedule 1 drug for another four years.

It wasn’t until the 2018 Farm Bill that hemp was removed from the controlled substance act, making the crop a normal agricultural commodity.

Rob Richard, president of the Wisconsin Hemp Alliance, said the change was “monumental” for the industry.

“It’s a sigh of relief for everybody in the country that’s growing it, knowing they no longer have to look over their shoulder,” he said. “That’s the biggest thing with regard to going from a pilot to a permanent, it changes its entire outlook.”

While originally grown to be used in fiber, hemp now is most commonly used for CBD oil, which is used to treat childhood epilepsy syndromes, anxiety, and for patients who suffer insomnia or have chronic pain. Known side effects have included nausea, fatigue and irritability.

Officials familiar with the crop have said hemp’s use in grains, fiber and plastics provide even more possibilities.

In 2017, Wisconsin lawmakers approved a hemp pilot program, which was officially launched the following year by the Department of Agriculture, Trade and Consumer Protection.

In the program’s first year, 347 people applied for licenses to grow or process hemp. Of the 247 licenses issued to grow hemp, 135 people grew 1,872 acres of hemp.

This year, more than 2,200 applications were received, with DATCP issuing 1,308 licenses to grow hemp and another 618 licenses to process.

“It’s by and large the largest expansion of a program in its first two years in any state in the country. It just goes to show that Wisconsin has a thirst for this crop and that we are really poised to take the mantle up again and become a national leader in hemp production,” Testin said.

In August, the Senate Committee on Agriculture, Revenue, and Financial Institutions unanimously passed out of committee and unanimously approved the new hemp bill making the program permanent.

Changes were made to address concerns by law enforcement raised in a May version of the bill. Police at the time worried about provisions that would have eliminated their ability to charge someone with trace amounts of THC in their blood with operating while intoxicated.

CBD oil, a legal hemp product, includes small amounts of THC, so lawmakers in August amended the bill to codify state practice in regard to THC tests, which would allow for up to one nanogram of THC per liter in the bloodstream.

“Anything above that, then you would be considered intoxicated and provided you’re using safe and legal hemp products you’re going to be at .03 percent THC concentration or lower. At that level it should not be detectable in the bloodstream,” Testin said.

The CBD effect: Despite confusion over what it is and what it does, Madison retailers are cashing in

Sturtevant Police Chief Sean Marschke, president of the state Chiefs of Police Association, said the organization is neutral on the bill’s latest version.

“The biggest thing we have to do is bridge that gap between all those categories … so they can help each other and try to break down that barrier,” said Phil Scott, founder and president of the Wisconsin Hemp Farmers and Manufacturers Association.

But how successful could a permanent hemp program become?

Donna Gilson, spokeswoman with DATCP’s Agricultural Resource Management Division, said, without any available market reports on the price of hemp, it’s difficult to speculate just how productive the crop could become.

“There’s no way of predicting how supply and demand will interact, because we’re at such a fledgling state. There is potential, but no one knows how much,” Gilson said in an email. “We will do all that we can to help hemp growers and processors be successful, but at this early stage, it’s just impossible to make any predictions.”

Currently, the U.S. market relies heavily on imported hemp goods, largely from Canada. In 2016, there were 225,000 acres of hemp globally — more than 20 times what was produced in the U.S, according to the LRB report.

“This suggests that there is great potential for growth of domestic hemp production and a growing market in the United States for hemp products,” according to the report.

With dairy, soybean and corn prices down, Testin said Wisconsin farmers could diversify their portfolios with hemp.

“I think a lot of them are looking to hemp as a potential option to increase their margins and keep their operations up and running,” Testin said. “There’s certainly the opportunity here to help our farm economy.”

Richard said it’s important to be realistic about hemp’s potential. It will never be as big as corn or soybeans, but it could reach the success of other niche crops such as cranberries or ginseng, he said.

“It’s not just the saving grace for farmers out there, but it does give them another option,” Richard said. “It’s another option to try to help them through this bad economic downturn.”

While much of the investment into hemp today is in the CBD market, it’s the crop’s potential in fiber and grain where future expansion is most likely, Richard added.

“I think most people will tell you that fiber and grain production is probably where the industry is going to have the largest growth,” he said.

But before hemp can flourish, Richard said investments need to be made in infrastructure — which includes harvesting, drying and processing.

“Once we get infrastructure with regard to fiber and grain production … I think this industry could have the potential to really take off in the next five to 10 years,” he said.

While Republican lawmakers and Democratic Gov. Tony Evers exceeded expectations by finalizing the state budget on time in early July, there ar…

The proposed bill is an ambitious step-up from bipartisan medical marijuana legislation that was announced last month and has received little attention from GOP leadership.

The Assembly is slated to vote on rules to transition the state's pilot hemp program to a permanent one, while also taking up discussion on a resolution establishing a "National Bible Week."

Also on Tuesday, Republicans approved a bill to officially recognize the evergreen that will stand in the Capitol building's rotunda as a Christmas Tree.

Evers has signed into law a bill that aims to assist farmers, processors and retailers in the state’s rapidly expanding hemp industry.

The second year of Wisconsin's budding hemp program is winding down, yet work has begun to prepare for next year's crop, which includes making adjustments for lessons learned this year.

Mike Bindl, center, Sam Liegel, left, and Cody Pulvermacher help plant thousands of hemp plants in May on land near Arena for Driftless Extracts in Lone Rock. The plants will be used to extract cannibidiol, or CBD, that will then be sold in a dry form to manufacturers who will use it in oils, food and nutritional products. Driftless is also growing hemp for fiber and is building a processing facility.

Sam Liegel, one of the founders of Driftless Extracts, trails a planting machine to make sure newly planted hemp seedlings are secured in dirt. At $1 per seed and a mature plant valued at $500, mistakes need to be kept to a minimum.