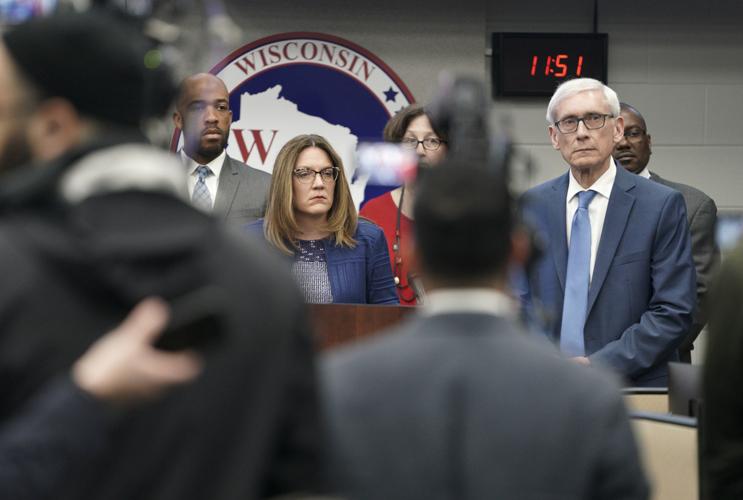 Wisconsin Department of Health Secretary-designee Andrea Palm, left, and Gov. Tony Evers answer reporters' questions in March at a press conference after declaring a public health emergency in response to the COVID-19 pandemic. 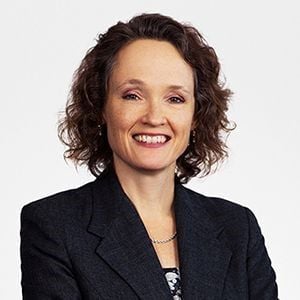 Wisconsin’s top health official, who led the state’s COVID-19-response, including a stay-at-home order and mask mandate that drew the ire of Republicans, has been tabbed by President-elect Joe Biden to help oversee the nation’s response to the pandemic.

Palm’s new role was announced along with several other appointments by the Biden administration Monday.

“These remarkable public servants reflect the very best of our nation, and they will help us contain this pandemic, create an economy that works for working people, and rebuild our country in a way that lifts up all Americans,” Vice President-elect Kamala Harris said in a statement announcing several key appointments, including Palm’s.

Taking Palm’s place at the state health agency will be Karen Timberlake, who served as DHS secretary under former Gov. Jim Doyle during the 2009 swine flu pandemic. She starts Jan. 25.

Evers described Palm as “a critical part of our administration and a consummate professional who has done an extraordinary job helping lead our state during an unprecedented public health crisis.”

“I know she will continue to serve our country just as she has our state — with empathy, kindness and tenacity,” Evers said.

Palm, who worked on the Affordable Care Act in the Obama administration, has been a major proponent of statewide Medicaid expansion, a federal provision Republicans in Wisconsin have rejected.

“(Palm) navigated our state through this pandemic pragmatically and diligently despite the barrage of Republican obstacles and threats,” Sen. Jon Erpenbach, D-West Point, tweeted.

U.S. Sen. Tammy Baldwin, D-Madison, said in a tweet that Palm “has been a strong leader for Wisconsin and she is a dedicated public servant who has worked hard to take bold action to confront the (COVID-19) pandemic.” Baldwin said she plans to support Palm’s latest nomination in the U.S. Senate.

Republicans have been more critical of Palm’s tenure in Wisconsin, and some in the state Senate even signaled she could have been fired over her response to the pandemic, including the stay-at-home order implemented last spring that the Wisconsin Supreme Court struck down in May.

“Palm’s partisan credentials and my concerns with her are certainly longstanding, but I am particularly puzzled as to why the Biden administration would hire someone largely responsible for what is now the slowest vaccine administration rollout in the entire Midwest to a role of responsibility overseeing that effort on a national level,” Sen. Andre Jacque, R-De Pere, said in an email.

State health officials have reported that more than 607,000 doses of the COVID-19 vaccine have been allocated to the state. About 239,000 doses have been administered so far. On Tuesday, the state’s Mobile Vaccination Program will launch to speed up Wisconsin’s deployment of vaccinations.

“It is unfortunate that the cabinet official in charge of (Evers’) disastrous COVID-19 vaccine rollout, DHS Secretary-designee Andrea Palm, is exporting her incompetence to the Biden administration,” Sen. Duey Stroebel, R-Saukville, tweeted.

Evers said last week Vice President Mike Pence and U.S. Health Services Secretary Alex Azar had told him that additional vaccines were available, but officials later said the stockpile had already been depleted. State health officials have said the vaccine deployment is largely limited by the number of doses being provided from the federal government, while Republicans in the state Legislature have described Wisconsin’s system as overly bureaucratic. Republicans have called on DHS to speed up the pace of vaccinations and been critical of the advisory committee tasked with prioritizing which residents are vaccinated first.

Evers said Timberlake’s experience under former Democratic Gov. Doyle “will be critical as we continue distributing vaccines quickly in our fight against this virus.”

“Our response to this pandemic and our vaccine distribution program will continue under the leadership of Karen, and given her expertise and familiarity with the Department, I have no doubts she will be able to hit the ground running,” Evers said.

Senate Majority Leader Devin LeMahieu’s office did not respond to questions about when the GOP-led state Senate might take up a vote on Timberlake’s nomination.

“Our top priorities at the DHS will continue to be advocating to receive Wisconsin’s fair share of vaccines from the federal government, distributing vaccines out across the state, and getting shots in arms as quickly as possible while we work together to prevent the spread of COVID-19,” Timberlake said.

DHS reported on Saturday a record 128 coronavirus-related deaths, breaking the previous record of 120 deaths reported in a single day set on Dec. 22. More than 5,400 people in the state have died from COVID-19. More than 520,000 people have tested positive in Wisconsin since the pandemic began.

Photos of the year: A look back at the Wisconsin State Journal’s top photos of 2020

It’s not surprising that someone as qualified as Andrea Palm is leaving Wisconsin for a position in the Biden administration. Who can blame he…

Temperatures will rise to the 30s Wednesday and Thursday, then plunge to around zero Friday night, according to forecasters.

A Madison location of Spherion, a national staffing and hiring agency, as well as the Workforce Development Board of South Central Wisconsin, will hold online job fairs Wednesday.

Senate Republicans are expected to vote Tuesday on a resolution to repeal the state mask mandate to fight COVID-19.

As a joint resolution, the item just needs to pass both chambers and does not require the governor's approval. Evers' latest emergency order and mask mandate are slated to run until March 20.

Sam Cornale will help guide the Democratic party through the 2022 midterm elections.

It will be Harris' first trip to Wisconsin as vice president.

Wisconsin Department of Health Secretary-designee Andrea Palm, left, and Gov. Tony Evers answer reporters' questions in March at a press conference after declaring a public health emergency in response to the COVID-19 pandemic. 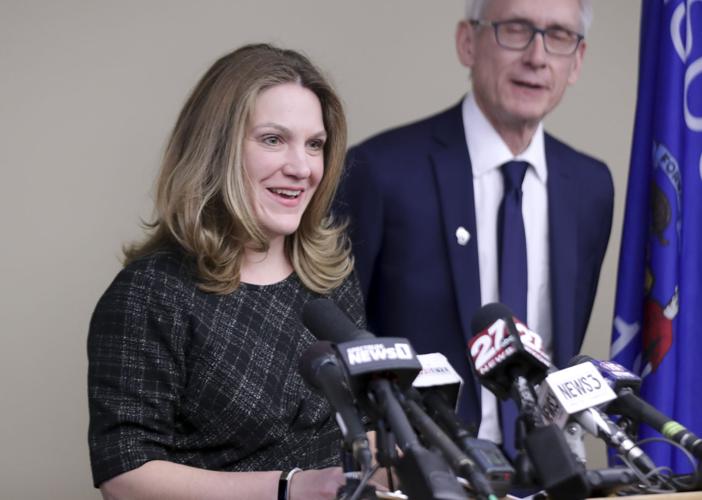