A group of individuals chanting "abortion is a human right, not just for the cis(gender) and white," led the charge up State Street, while a larger group, attendees of the "Bans Off Our Bodies" march trailed about a block behind. At the Capitol, the two groups were met by the tail end of a march organized by Pro Life Wisconsin.

Pro-choice and anti-abortion protestors thrust signs at one another, but aside from some shouting between individuals, there was little confrontation.

The second pro-choice march was hastily organized Saturday morning by a subset of Bans Off Our Bodies volunteers who felt organizers of the original march were not being inclusive.

"When white women are given a platform, they don't include the rest of us," said Tarah Stengler, an organizer of the alternative march who was originally going to be part of the safety team for the Bans Off Our Bodies march. "A general sense of exclusion of trans, BIPOC (Black, Indigenous and People of Color), nonbinary and disabled folks was felt."

The Bans Off Our Bodies march, led by Indivisible Madison, was part of a national "Rally for Abortion Justice" event organized by the the national arm of Indivisible, an organization dedicated to electing progressive candidates. Over 650 pro-choice rallies took place in all 50 states on Saturday. Saturday also marked the 2021 Women's March, which drew thousands to Washington D.C. Protestors at this year's Women's March also focused on continued access to abortion.

The day before the Bans Off Our Bodies march, the UW-Madison’s BIPOC Coalition, originally a co-sponsor of the event, published a statement rescinding their co-sponsorship and endorsement. The statement said Indivisible organizers "repeatedly failed to recognize their privilege, be inclusive of all folks with uteri, and understand that BIPOC, queer, disabled and/or low-income folks do not owe cis-gender, middle-class white women their support, nor labor in a movement that white women co-opted."

Cisgender refers to people who identify with the gender they had or were assigned at birth.

Stengler, a founding member of the BIPOC Coalition, said the separate march was not affiliated with any specific organization. Both pro-choice marches concluded at the Capitol's King Street entrance. At the Capitol, Stengler gathered the crowd and began to speak, but was interrupted when Indivisible Madison Lead Organizer Linda Kessel attempted to take the microphone, telling the crowd to go home.

Kessel said the two groups have the same goal "which is abortion justice, but our means of protest differ."

Once Stengler was able to take back the microphone, members of both pro-choice protests gathered to hear speakers share their frustrations with the lack on inclusivity in the reproductive rights movement. Ashley Cheung, a new member of the BIPOC Coalition, said the alternative march was "fueled by a desire to lift up the voices of those who have been oppressed in the mainstream feminist movement."

"We watched new voices take back this march and called out the oppression of trans and BIPOC voices," Cheung said. "It's powerful knowing my desire to change is enough to push others into action."

The event organized by Pro Life Wisconsin, called the March for Life, was also part of a national movement. March for Life holds marches in Washington, D.C., California, Pennsylvania, Virginia and for the first time this year, Wisconsin. Pro Life Wisconsin sent buses across the state to pickup attendees. After the march, the buses brought the crowd to Planned Parenthood Madison on Orin Road, where the group prayed.

"Now is a critical time in the pro-life movement. On Dec. 1, the U.S. Supreme Court will hear oral arguments in Dobbs vs. Jackson, Mississippi. Mississippi's law would limit abortion to 15 weeks," said Ann Scheidler, executive director of Pro-Life Action League. "I am very proud of Mississippi for helping bring America back to a culture of life."

The Dobbs v. Jackson Women's Health Organization lawsuit challenges Roe v. Wade, the landmark U.S. Supreme Court decision which gave women the right to an abortion in 1973. The case comes after Texas passed a law earlier this month banning abortions once cardiac activity is detected, which is usually around six weeks of pregnancy. To enforce the law, Texas deputized private citizens to file lawsuits against violators and has entitled them to at least $10,000 in damages if successful. On Friday the Biden administration urged a federal judge to block the Texas law, which is considered the most restrictive in the country.

Abortion has emerged as a major issue in Wisconsin’s 2022 gubernatorial election after former Lt. Gov. Rebecca Kleefisch, a Republican who recently announced her bid for governor, said she would sign a bill that bans abortions once doctors can detect a fetal heartbeat. If the U.S. Supreme Court were to overturn or weaken Roe, Wisconsin and other states could likely enact abortion restrictions that stand. But if Roe is scaled back or overturned, lawmakers may not even need to do anything for abortion to be completely outlawed in Wisconsin. That’s because Wisconsin has an existing 1849 abortion ban on the books that is unenforceable due to federal court decisions, including Roe. The 1849 law criminalizes doctors who perform abortions. Under the law, performing an abortion is a felony punishable by up to six years of combined prison and extended supervision.

Casey Garhart, a volunteer with the Bans Off Our Bodies march who has been marching for reproductive rights since the 1970s, said Texas' new law promotes "vigilantism." Garhart said stricter laws will not end abortions, just make it harder to get the procedure in a safe, affordable way.

"We are never going to get rid of abortions. When I was growing up people were getting abortions all the time and some of them were dying and some were being maimed," Garhart, 71, said. "I'll continue marching as long as I can walk to provide people with the opportunity to make life and death decisions for themselves, about their own bodies."

I attended the "Bans off our bodies" women's march in Madison last Saturday. I needed Sunday's State Journal article "Trio of marches meet at …

Ousted Milwaukee police chief Alfonso Morales sued the city of Milwaukee after he was demoted for ordering officers to fire tear gas and pepper spray at demonstrators last year. 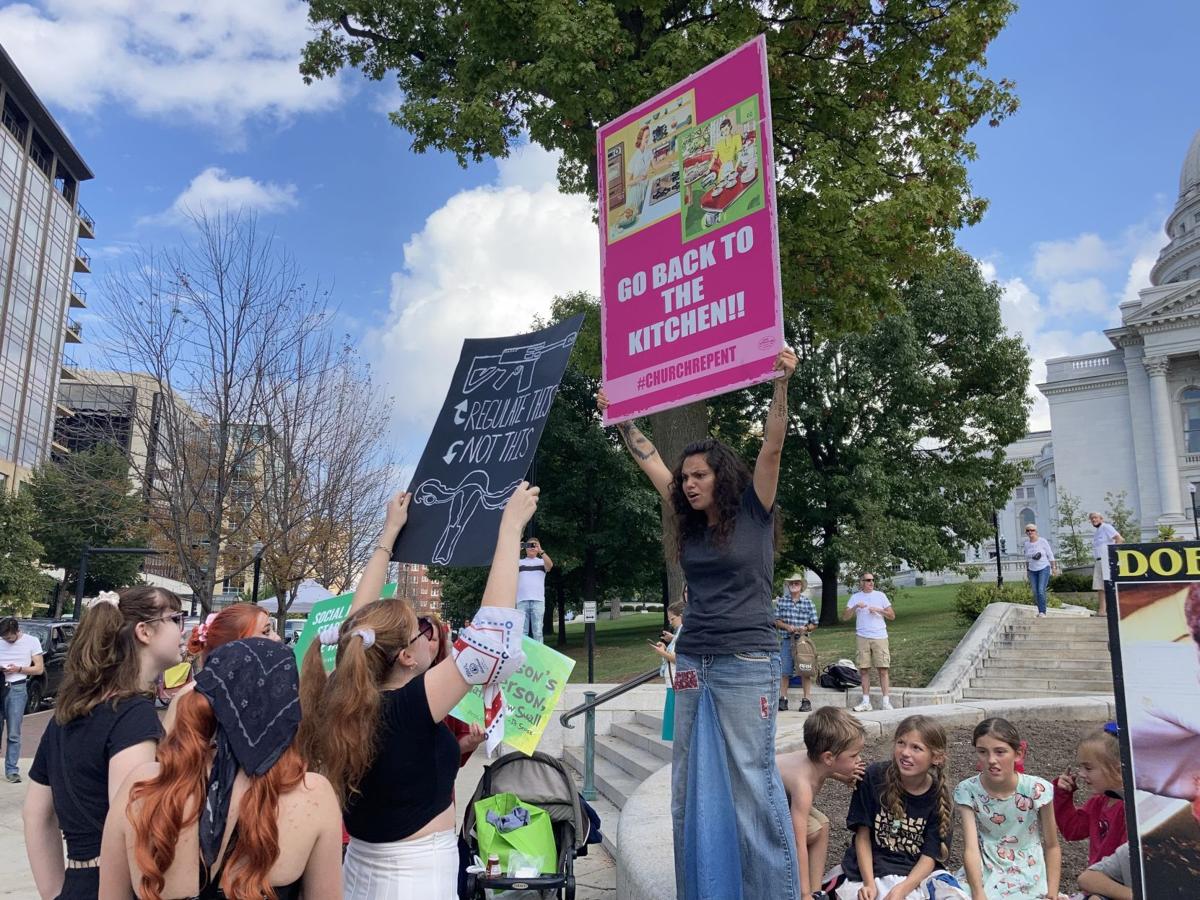 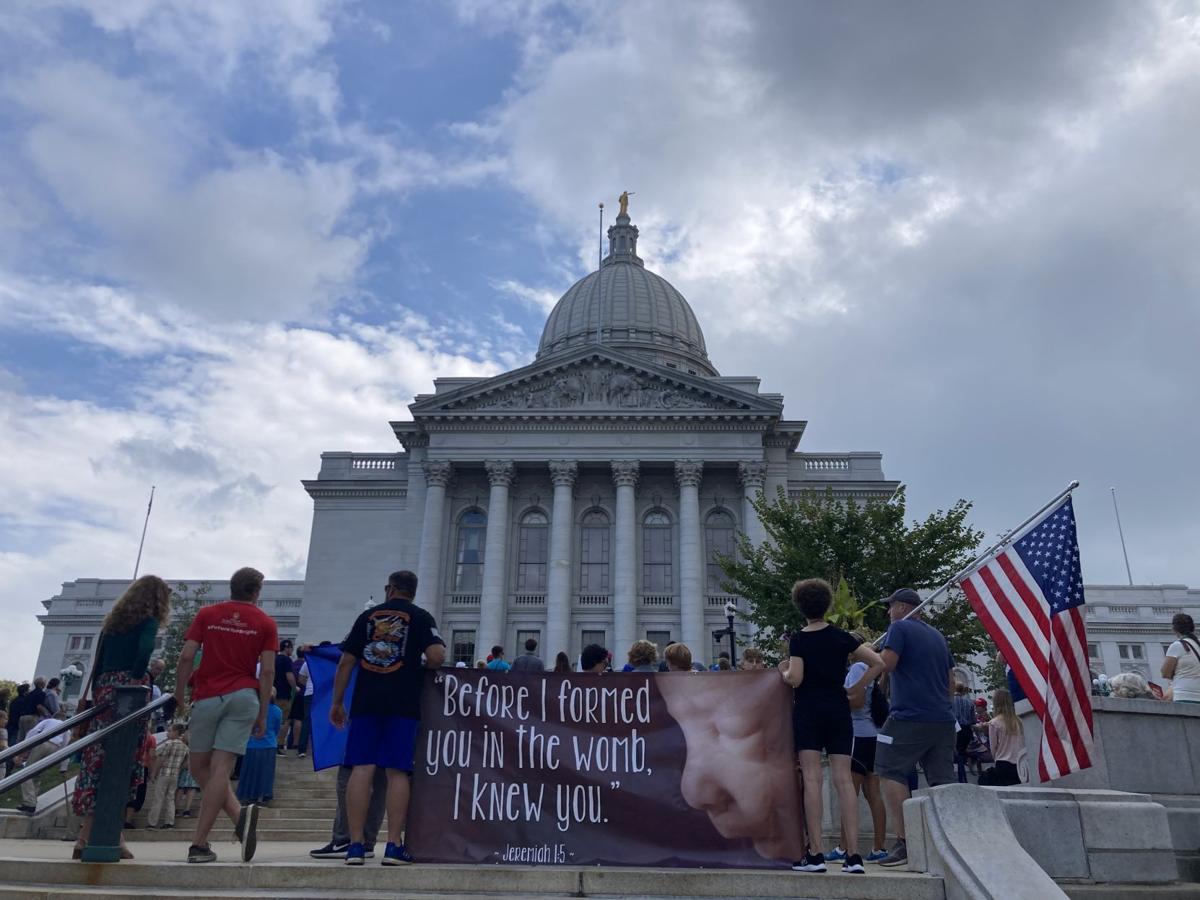 The march organized by Pro Life Wisconsin was the first March for Life in the state. 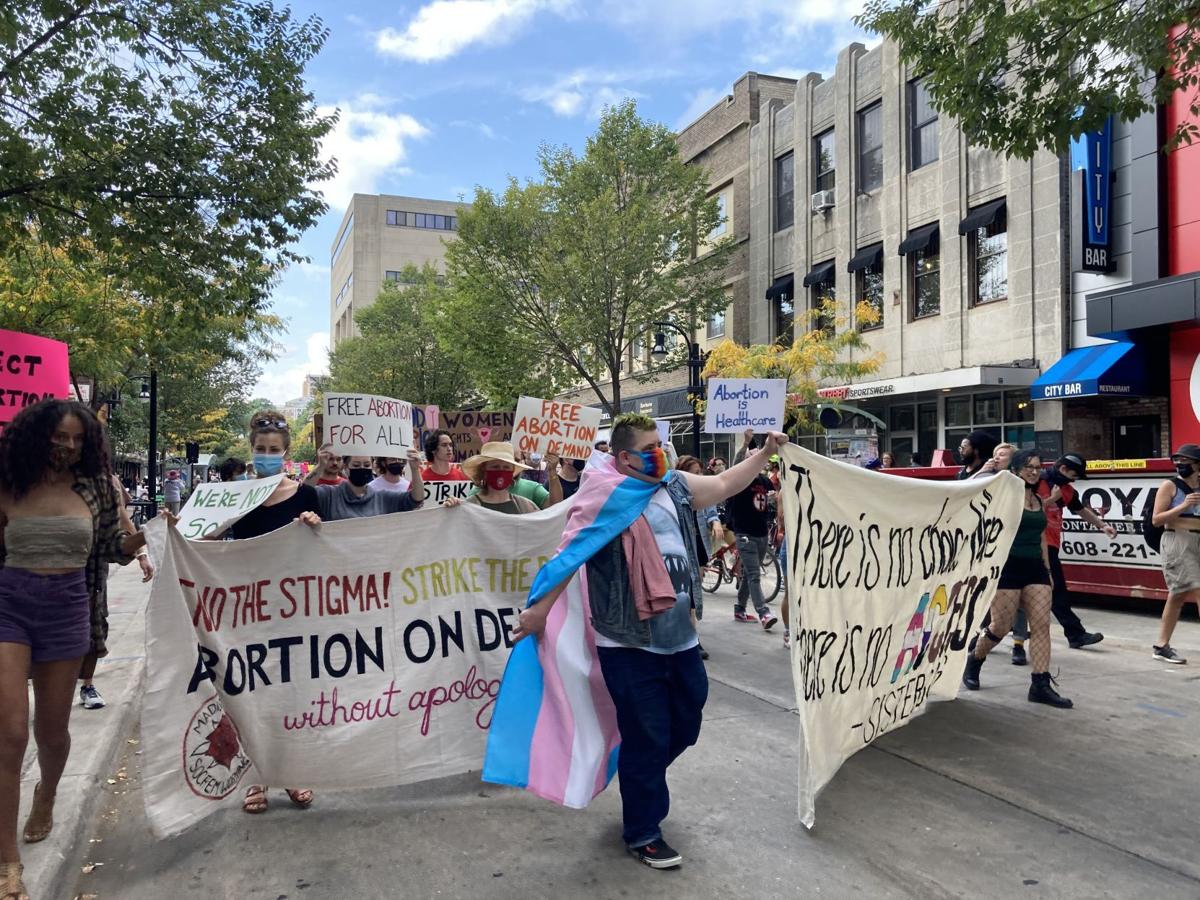 What was originally just the "Bans Off Our Bodies" march split into two separate events after a subset of people decided to form their own march. Some volunteers with the original event felt the march was not inclusive of BIPOC (Black, Indigenous and People of Color) and transgender people. 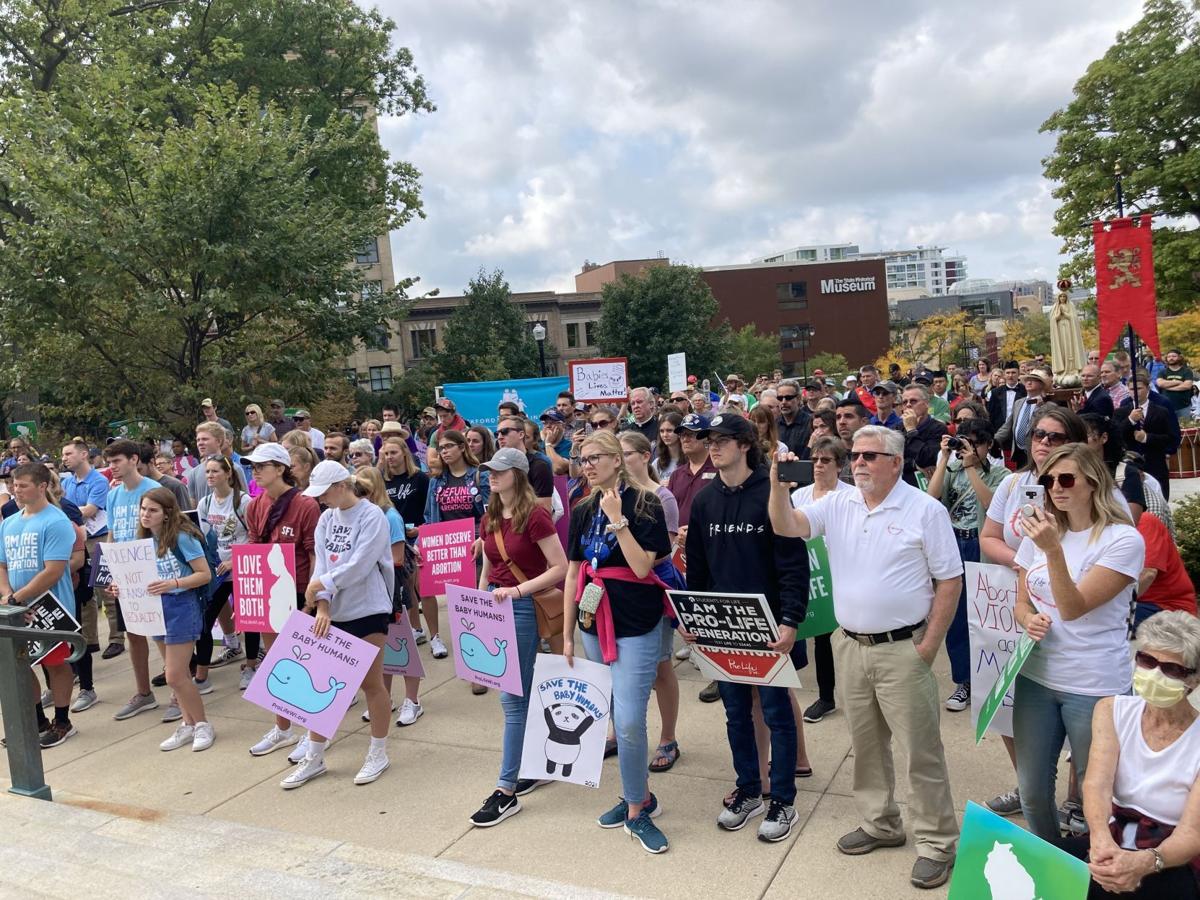 The three marches drew thousands of people to the state Capitol. 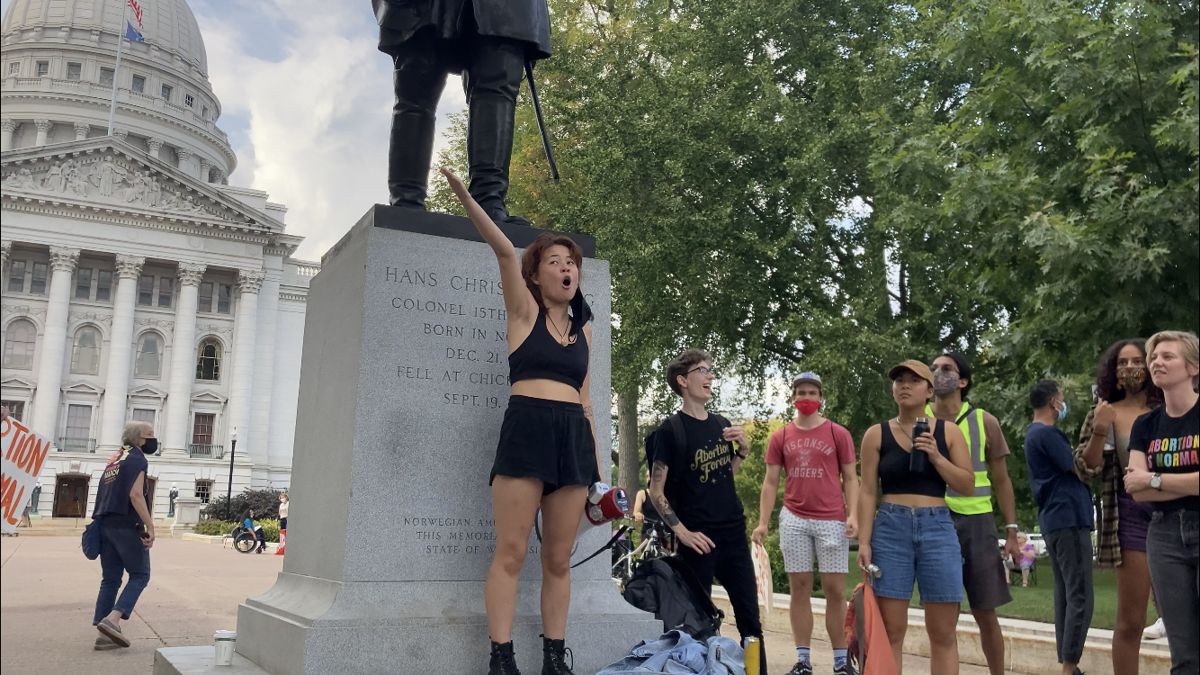 Tarah Stengler, one of the former Bans Off Our Bodies volunteers that organized the separate reproductive rights march, said the original march was exclusionary.