A coalition of local veterans is asking for community support to remove graffiti damage at the Wisconsin Veterans Museum and replace protest art with images that represent those who have served in the military.

The group, Wisconsin Veterans for a Clean Museum, had secured the go-ahead from building owner Greg Rice to orchestrate the project last month under the condition that members be responsible for funding and overseeing the work, but support for the project was rescinded July 7 after the Wisconsin Veterans Museum Foundation Board voted 6-3 against it.

The group has already raised the $20,000 needed for the work but is uncertain about what to do now without permission from the museum’s board.

Since early June, the building located on the Capitol Square has been the target of “inflammatory” graffiti, according to BJ Ganem, a U.S. Marine Corps veteran and group organizer. The graffiti first appeared after the Downtown protests against racism and police brutality in response to the death of George Floyd in Minneapolis police custody.

On the plywood covering the museum’s windows is a mural honoring Floyd that was commissioned by the city of Madison, but graffiti on the building itself uses language that offends some veterans, according to Tim La Sage, a U.S. Marine Corps veteran and a member of the Foundation Board who supports the project.

“There’s something that needs to be done with the damage, and we think that there’s a pragmatic and compassionate way to do it instead of just letting hate fester,” Ganem said.

They had planned to remove the mural and display it at the corner of State and Mifflin streets. In its place, they would put up images from wars throughout history that represent “all the veterans of all different colors, sizes, sexuality and sexes,” Ganem said.

The images will “show the contributions of African American service members before and after military-unit segregation, as well as the cohesive nature of modern-day multiracial, multigender military units,” according to a statement from the group.

On June 10, the coalition sent a letter signed by 10 veterans to Wisconsin Veterans Affairs Secretary Mary Kolar offering its assistance in repairing the building’s damage.

Kolar released a public statement saying the museum “has covered most of the damaged areas with plywood that has been recently painted with art provided by local artists in order to celebrate inclusivity, diversity and recognize the plight of Black Lives and Black Veterans in Wisconsin.”

The organizers say they have tried to contact Kolar to ask if she supports repairing the museum, but have not received a response.

La Sage said it’s disappointing to see veteran leaders — referring to the museum’s board and Kolar — not amplifying the voices of veterans, something they are supposed to do.

The Wisconsin Veterans Museum Foundation said in a statement that while it appreciates the veterans’ efforts, it did not vote to act as fiduciary agent on the repair project because “the Foundation’s mission is to solely provide monetary support to the Veterans Museum for developing new exhibits, implementing public educational programs and acquiring historical collections.”

They also said the foundation’s charter does not allow it to collect funds for projects outside its mission.

Dane County takes first tentative steps toward getting back to business

Ganem said Rice, the building’s owner, pulled support for the project out of fears that removing the mural and graffiti would invite retaliation and more damage. Rice did not respond to a request for comment.

Ganem said he hopes the community will understand that their efforts are not to silence the voices of those who are protesting, but to honor the diverse veterans who have fought for those protesters’ rights.

Additionally, the new installation would be covered with a clear plastic that would allow any subsequent graffiti to be easily washed off, according to the group.

“We’re not trying to stifle their overall message at all that we need systematic changes in this country. We’re just trying to de-escalate the situation, make it better and bring people together,” Ganem said. “We want to put an image up there that is supportive of the national conversation, but also brings back some honor and dignity to the veterans.”

Julia Fensterwald, a Russia native who moved to Verona when she was 11, is gearing up to become one of the first members of the newest branch of the military.

With State Street businesses mostly boarded up, the worst damage occurred on Capitol Square, where vandals smashed windows at more than a dozen buildings, looted some stores and spray-painted slogans. 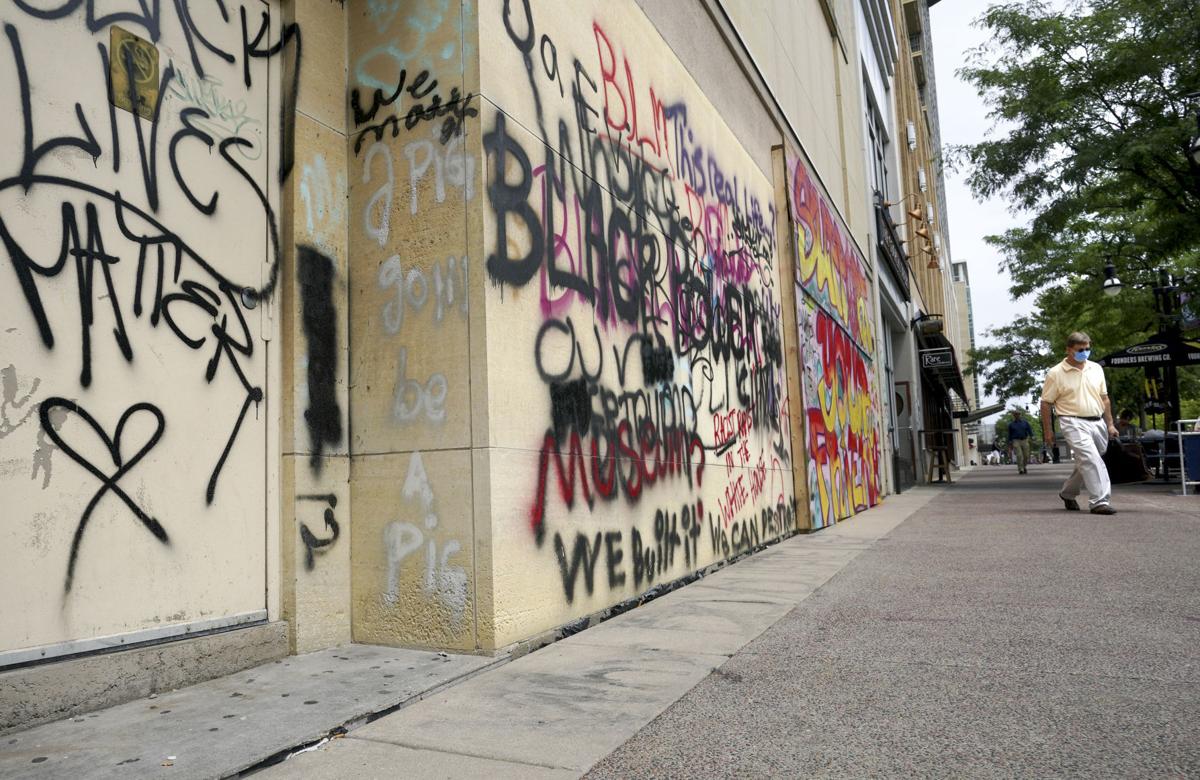 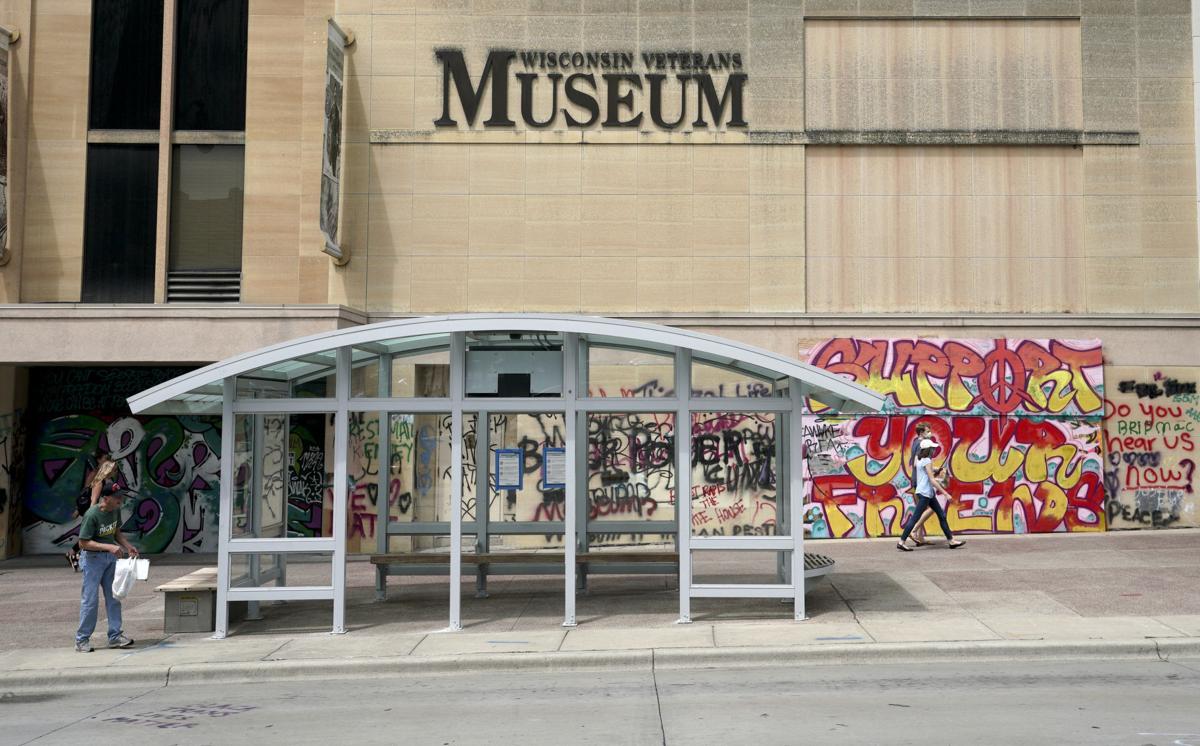 The group seeking to restore the Wisconsin Veterans Museum has already raised the $20,000 needed from donors. 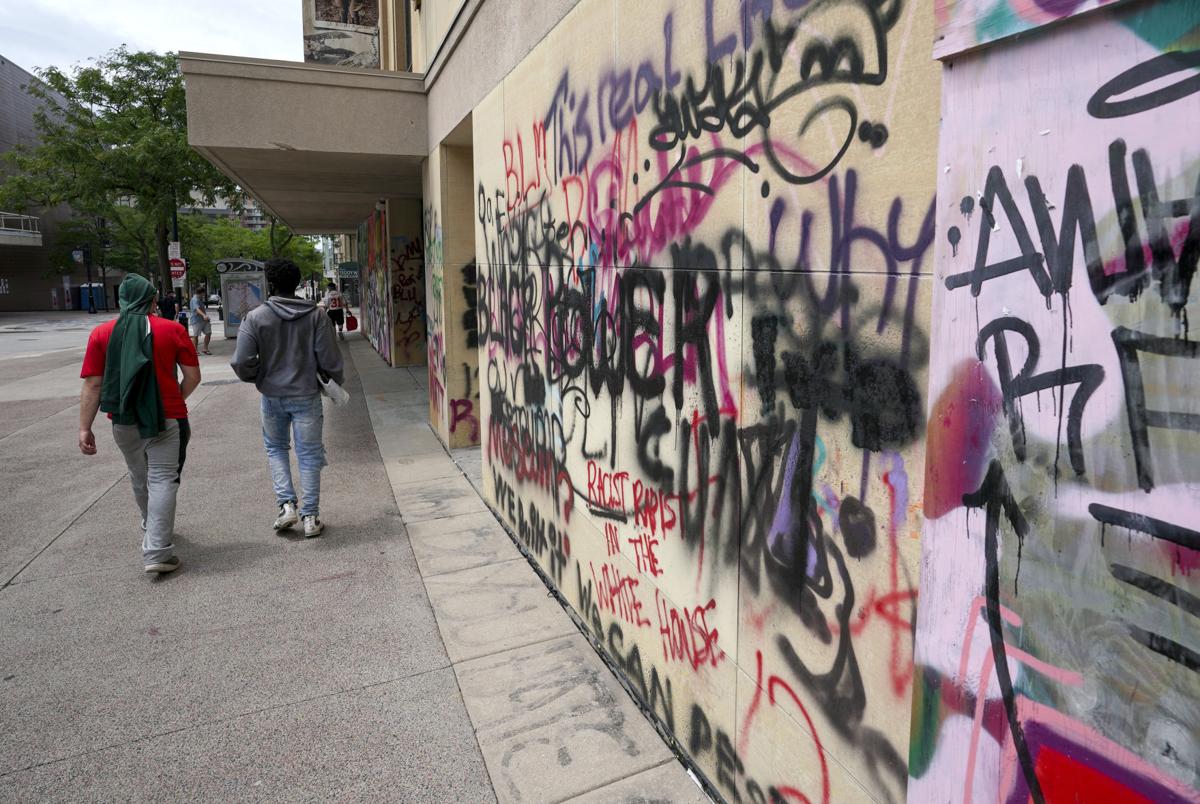