Nails’ Tales, the towering obelisk of footballs that has amused, irked and offended visitors to Camp Randall since it was installed in November 2005, could be going away.

As part of a plan to restore the outside of the landmark UW-Madison Field House and improve the plaza along its southwest side, the university is weighing whether to keep the controversial, 50-foot-tall sculpture near the corner of Regent Street and Breese Terrace.

“We don’t know what’s going to happen with the sculpture,” Gary Brown, director of campus planning and landscape architecture, said Monday. “It could stay. It could go. It could be relocated. We’re still talking about the whole thing.”

The university hopes to restore the Field House with renovated or new windows, doors and lighting, clean the stonework and improve the plaza with more public space and new landscaping, tiered seating, a reconfigured parking lot, fencing and a retaining wall along Monroe Street and Little Street, the one-block street that hugs the southern end of the property.

The fate of Nails’ Tales, done by acclaimed artist Donald Lipski, a UW-Madison graduate whose works have been installed around the country, came into question because the sculpture isn’t included in a concept sketch of the restoration and plaza project to be shared with the city’s Joint Campus Committee in an informational presentation set for Wednesday.

The 14-page submission by SmithGroup, an architectural, engineering and planning firm headquartered in Detroit, shows other improvements, including a gateway at the corner of Breese Terrace and Little Street featuring a large new sign — but no Nails’ Tales.

Brown said he didn’t know if Nails’ Tales was purposefully left off of the images but stressed that the project is still in its preliminary stage and said the university is gathering input from the surrounding neighborhoods and others.

UW athletics spokesman Brian Lucas echoed that the plans have not been finalized and declined further comment. SmithGroup referred questions to the university.

Lipski, contacted early Monday afternoon, said he hadn’t heard about the university’s concept plans. He could not be reached later Monday after Brown further detailed plans and process.

The university will present plans to the city’s Joint Campus Area Committee at 4:45 p.m. Wednesday in Room 132 of the WARF Building, 610 Walnut St.

Ald. Shiva Bidar-Sielaff, 5th District, who represents the site and is a member of the committee, said the university had contacted her about its plans for the Field House and plaza but that the sculpture didn’t come up.

She said she respects Lipski but isn’t a fan of Nails’ Tales.

“I wouldn’t miss it,” she said. “I do not know that anybody would. It continues to be the same conversation as when it was first placed there. It doesn’t seem to fit very well.”

The concrete, steel, stone and resin sculpture uses the form of an ancient obelisk, similar to the Washington Monument, from which emerges a towering pile of footballs. Inspirations for the sculpture included the Camp Randall archway at Dayton Street and Randall Avenue, and the work intentionally seems unfinished, as if the stone might erode away leaving more footballs, Lipski has said. Nails was the nickname of Lipski’s college roommate, Eric “Nails” Nathan.

The piece was intended to project power and strength, Lipski said at the time of its unveiling. But critics said it brought to mind an ear of corn or male anatomy.

Nails’ Tales was commissioned by the Wisconsin Arts Board’s Percent for Art program. The state, as well as city committees will be consulted as concepts for the project evolve, Brown said. The artist will also be consulted, he said.

The university hopes to decide on a direction for the project in the spring, Brown said.

We are sharing Wisconsin State Journal staffers' favorite work from 2019. From reporter Dean Mosiman: I see many sides of life covering the ci…

The proposal would set aside 1 percent of the total budget for city capital projects exceeding $5 million for public art.

The city will consider creating a mechanism for funding public art projects.

There are public art controversies, and then there is “Nails’ Tales.”

Doug Moe: Maybe it was all a mistake

A sculpture screw-up in Canada leads to a new theory about Madison's infamous "Nails' Tales."

Here’s an idea to help decide what should be done about Nails' Tales, the tall sculpture of footballs outside Camp Randall in Madison.

Projects to clean up the exterior of the University of Wisconsin Field House and construct a new plaza outside its south doors have been given a thumbs-up.

UW-Madison will remove the controversial sculpture sometime this summer and will work with the artist to find a new site for it.

The controversial sculpture near Camp Randall Stadium, which critics say resembles an ear of corn or male genitalia, will be removed this week.

Art experts say "Nails' Tales" sparked conversation in the community, and for that it's been a success. 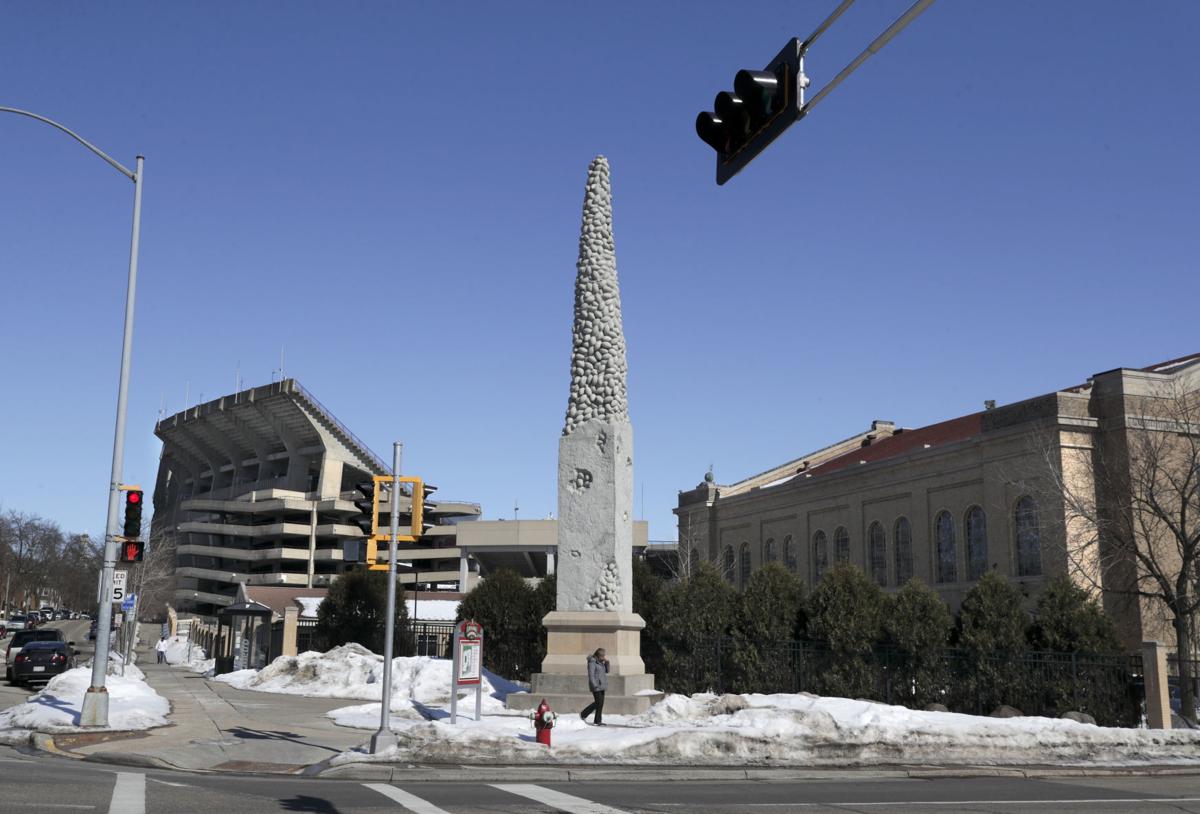 The university is weighing whether to keep Nails' Tales as part of a Field House renovation. 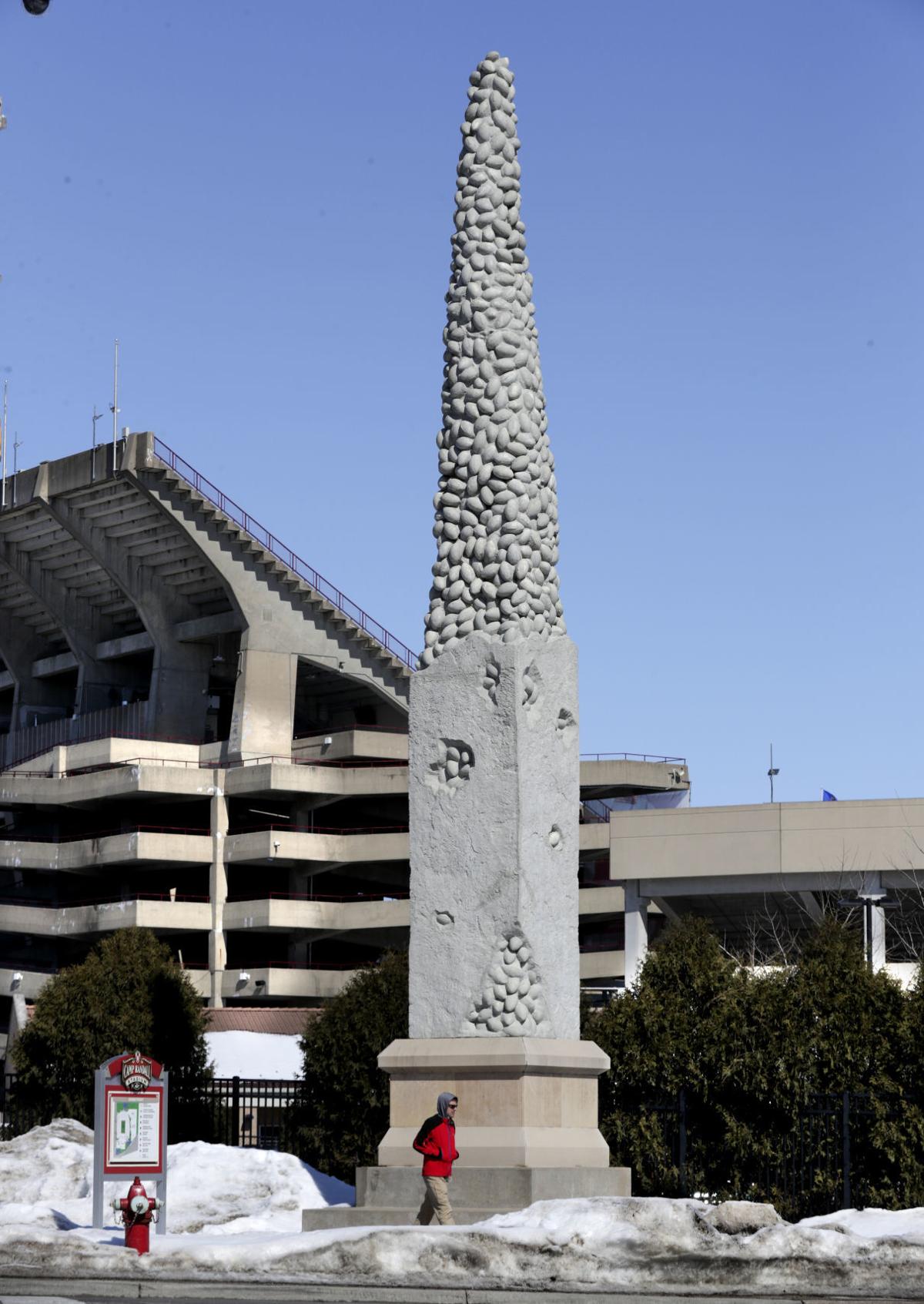