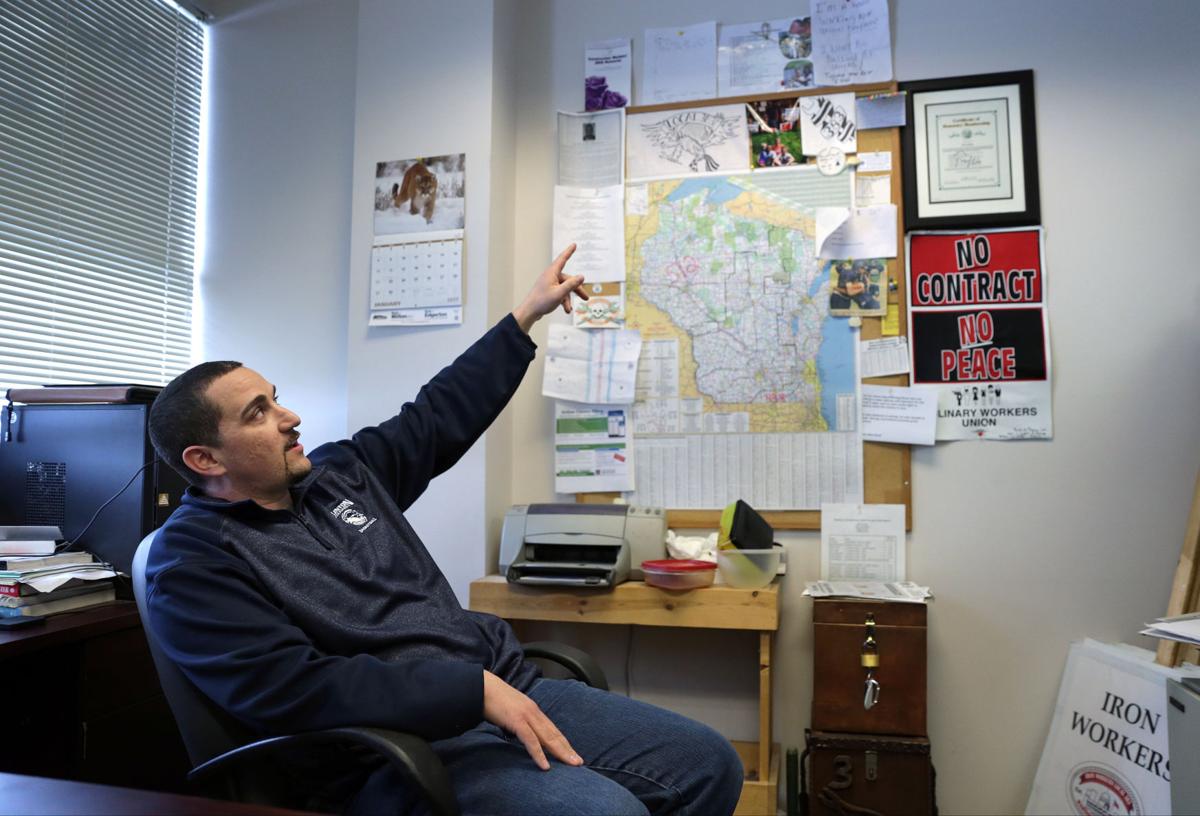 Anthony Anastasi, business agent and organizer with the Iron Workers Local 383 union, points to a note left on his wife's car during an interview in his office at the Madison Labor Temple. Anastasi's wife, a schoolteacher, received the note during the protests, debate and passage of Act 10. 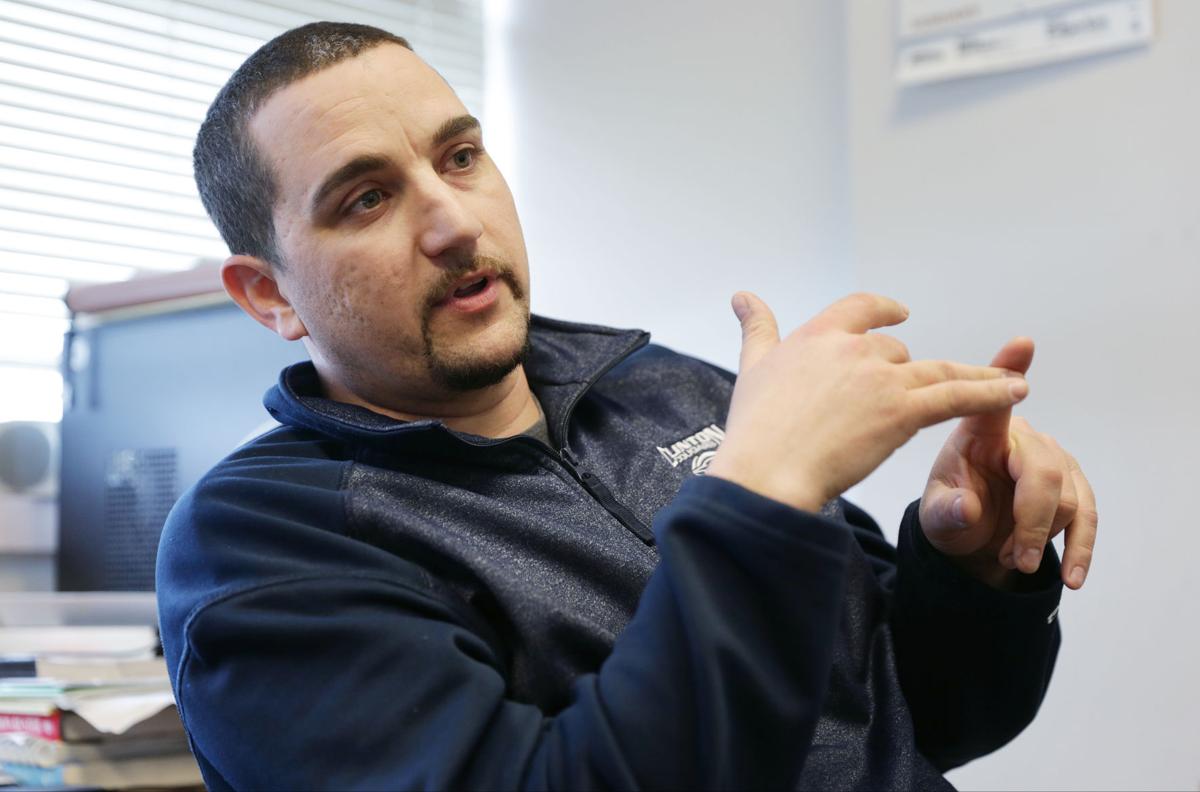 Anthony Anastasi, business agent and organizer with the Iron Workers Local 383 union, says the effects of anti-union legislation like Act 10 and right-to-work amount to "the depletion of the middle class."

Union membership in Wisconsin is down nearly 40 percent since Republicans passed legislation known as Act 10 that all but eliminated collective bargaining for public workers, new federal data show.

In 2016, the percentage of public and private workers who were members of unions was 8.1 percent, or 219,000 union members. That’s down by 136,000 members, or 38.3 percent, since 2010 levels, the year before passage of Act 10, according to a report released Thursday by the U.S. Department of Labor’s Bureau of Labor Statistics.

“Relentless attacks from right-wing politicians and corporate special interests have certainly taken a toll,” said Rick Badger executive director of state employee union AFSCME Council 32. “Today it’s much harder for working people to join together in a union and fight for fair wages and safer workplaces.”

A spokesman for Walker did not respond to requests for comment.

While the percentage of Wisconsin workers in unions is again far below the national average of 10.7 percent, union membership did not take the tumble in 2016 that it did in 2015.

That drop in membership also came as Republican lawmakers were adopting so-called right-to-work legislation, which prohibits a company and a union from signing a contract that requires workers to pay dues.

Republican supporters said at the time the move would improve conditions for business investment, help keep businesses from relocating to right-to-work states and entice out-of-state companies to move to Wisconsin.

In 2015, the state’s three AFSCME councils merged, prompting two out of three dues-paying members to drop out.

Badger, who represents the reshaped AFSCME council, said the union “is getting back to organizing basics” and rebuilding grassroots efforts — a strategy the state’s largest teachers union, the Wisconsin Education Association Council, also has adopted in recent years after losing more than half their members since Act 10 passed.

Anthony Anastasi, a business agent and organizer for the Iron Workers Local 383 from Beloit, said the effects of anti-union legislation like Act 10 and right-to-work amount to “the depletion of the middle class.”

Anastasi, 39, said with declining union membership comes fewer jobs that pay what he describes as a fair wage. He said without his job, and his wife’s job as a public school teacher in Clinton, their family of five would have to sacrifice either time together as a family or children’s activities.

“If I didn’t make a fair wage, with benefits, I wouldn’t financially be able to do the things or provide the things for my children that my wife and I are able to do right now,” said Anastasi, a member of Local 383 for 13 years.

He offered his son’s involvement in a club hockey team as an example.

“We’re not in the big, fancy, go-everywhere (team), just local club hockey,” said Anastasi. “But there’s an expense to that. And I appreciate that, and I’m OK with that, but what I think about is, who can’t afford that? What about those kids? What about their parents who are working two to three jobs? Maybe they could afford it, but they don’t have the time to do those things with their children.”

A spokeswoman for Senate Majority Leader Scott Fitzgerald, R-Juneau, said Act 10 has been an “undisputed victory for Wisconsin taxpayers.”

“Wisconsin’s declining union membership since the passage of right-to-work legislation only reflects that workers now have the ability to make their own decision about the costs and benefits of union membership,” said spokeswoman Myranda Tanck. “Senator Fitzgerald maintains that the heart of this issue is a simple matter of individual freedom.”

UW-Madison economist Steven Deller said the level of union membership nationally has been declining for years — a trend that is likely to continue with large-scale, labor-intensive manufacturing being replaced with smaller-scale technology that requires more capital but less manual labor. Large-scale manufacturing companies tend to be unionized and their replacements are more likely not to be.

“Clearly the days of barely making it out of high school but getting a union job at $30 per hour with benefits because your uncle is with the union are gone, and not coming back,” he said. “Some have argued that these ‘bloated’ union jobs made (U.S.) manufacturing uncompetitive, and there is some truth to that. ... But did these union-scale jobs result in the growth of the middle class and the narrowing of the income gap? Some would argue yup, sure did.”

Meanwhile, more and more people are employed in small businesses, which tend to be non-union shops, Deller said, and for Wisconsin, Act 10 has had a significant effect.

WEAC is selling its headquarters

The Wisconsin Education Association Council is seeking $6.9 million for its 51,000-square-foot building and nearly 40 acres of land.

Union: Employees may bargain over 'fair share' dues in wake of right-to-work ruling

A final order on the Friday ruling has not been issued.

In the five years since Act 10 was signed by Gov. Scott Walker, union membership in Wisconsin has plummeted.

The percentage of Wisconsin workers in unions was 8.3 percent, or 223,000 union members -- down from 11.7 percent the year before, or 306,000 union members, according to a new report released Thursday.

Local members of the Wisconsin Education Association Council are turning their efforts toward school board races and reaching out to parents in an effort to eventually regain some influence in Madison.

The Court of Appeals order trumps a decision by a Dane County judge not to stay his ruling throwing out the law on grounds it unconstitutionally takes property from unions without compensation.

Fewer than half of Wisconsin school districts have certified teachers unions

As of November, 199 school districts have unions certified by the state.

Anthony Anastasi, business agent and organizer with the Iron Workers Local 383 union, points to a note left on his wife's car during an interview in his office at the Madison Labor Temple. Anastasi's wife, a schoolteacher, received the note during the protests, debate and passage of Act 10.

Anthony Anastasi, business agent and organizer with the Iron Workers Local 383 union, says the effects of anti-union legislation like Act 10 and right-to-work amount to "the depletion of the middle class."