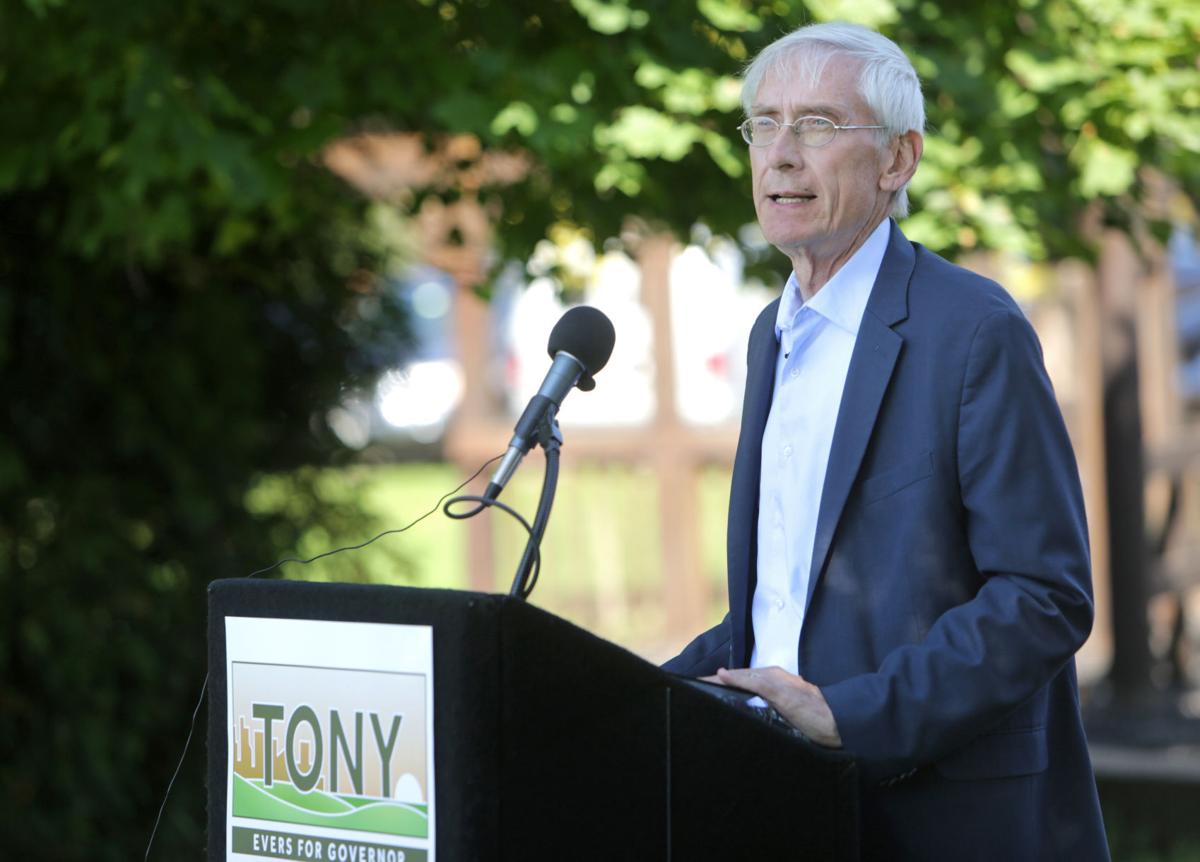 State Superintendent Tony Evers said Wednesday he is running to unseat Gov. Scott Walker because the governor's policies have divided the state and limited funding for K-12 and higher education. 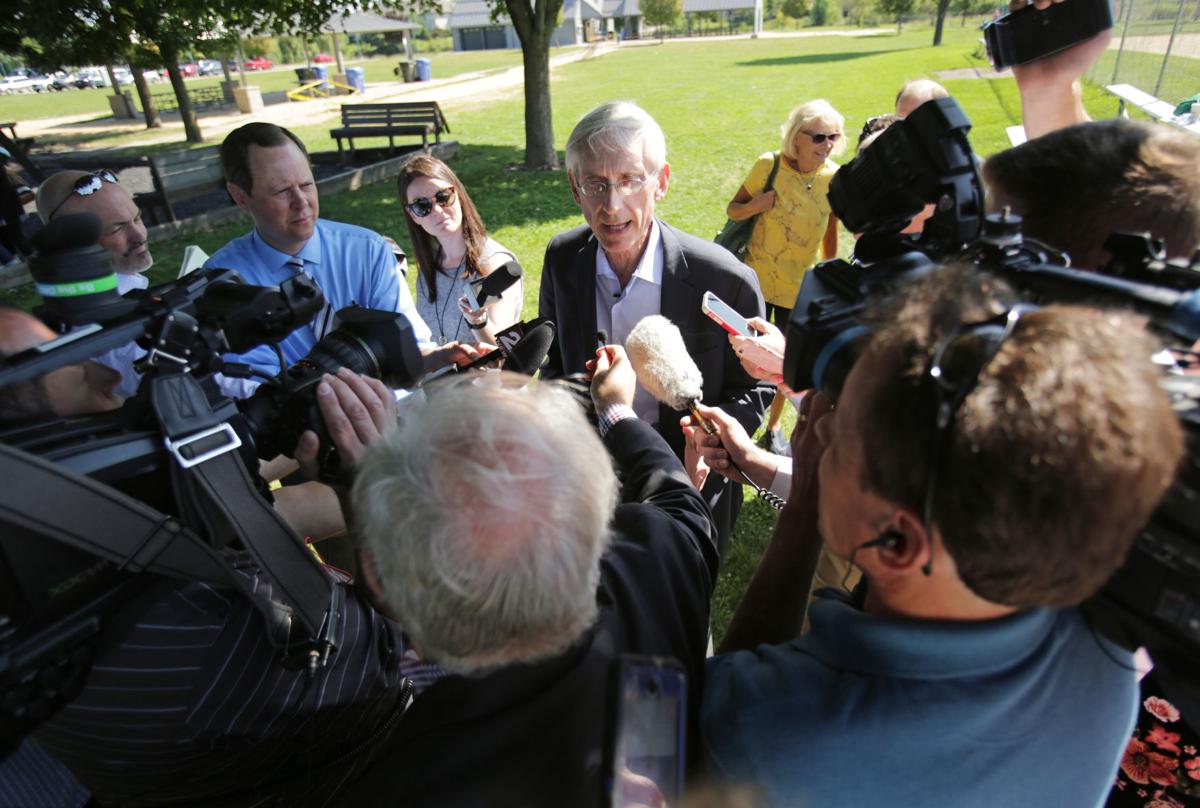 State Superintendent Tony Evers addresses the media in Fitchburg after announcing he will seek the Democratic nomination for governor. 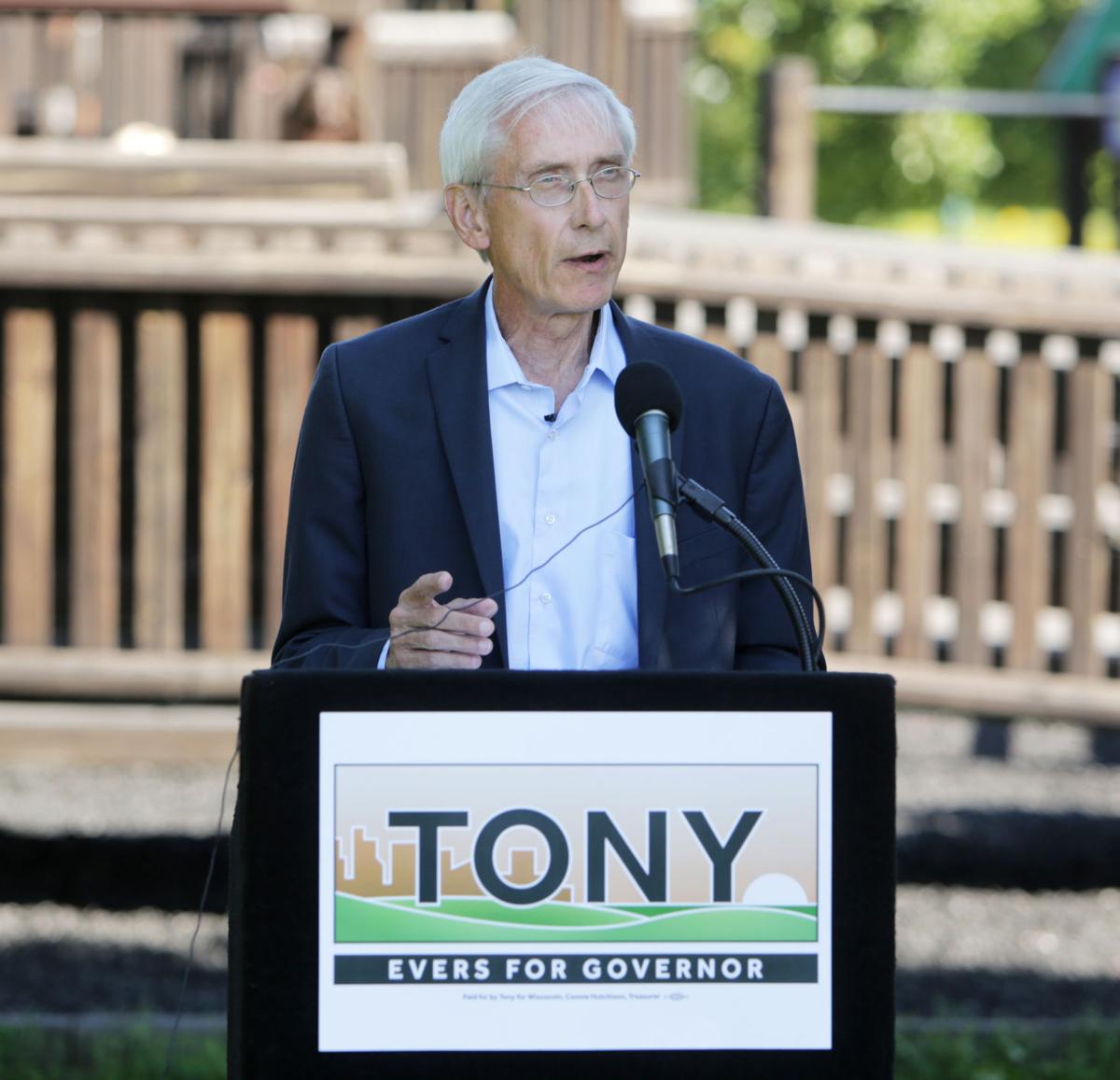 State Superintendent Tony Evers tells a crowd at Fitchburg's McKee Farms Park that he is running for governor in 2018 in part because Gov. Scott Walker has divided the state. 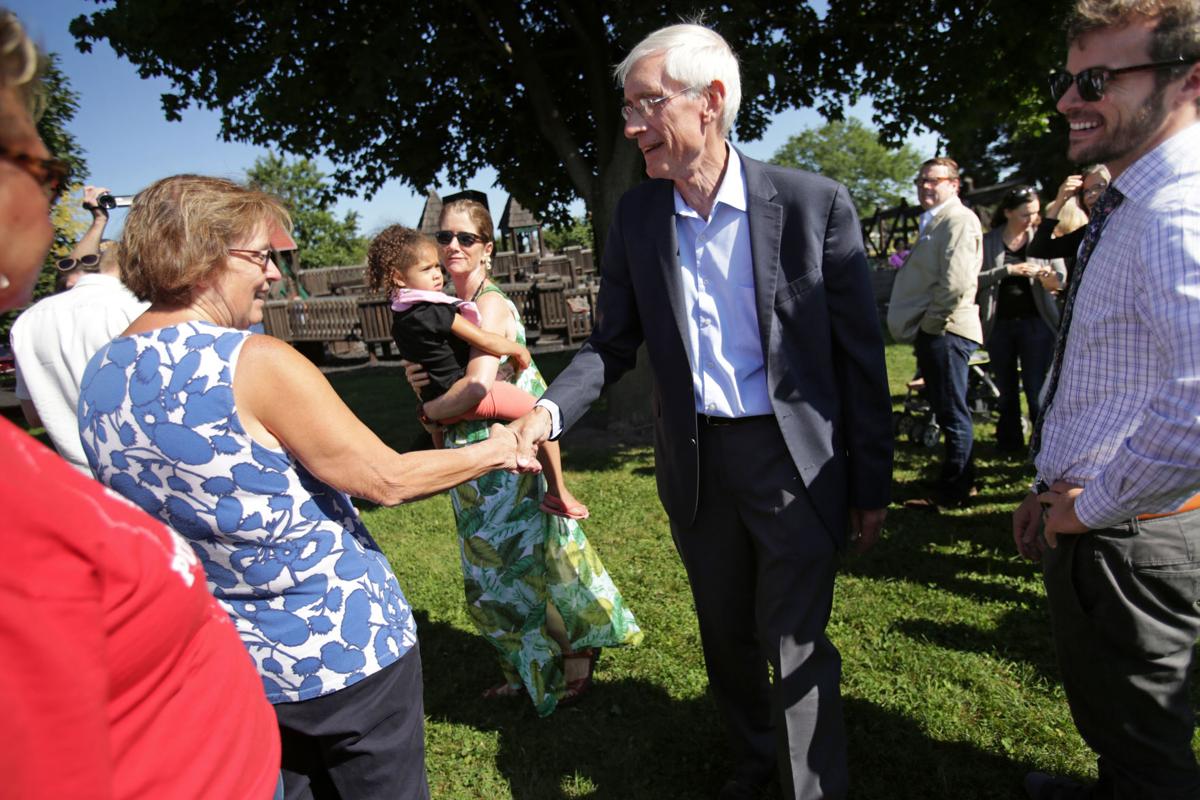 State Superintendent Tony Evers greets the crowd before announcing in McKee Farms Park in Fitchburg that he is running for governor in 2018. 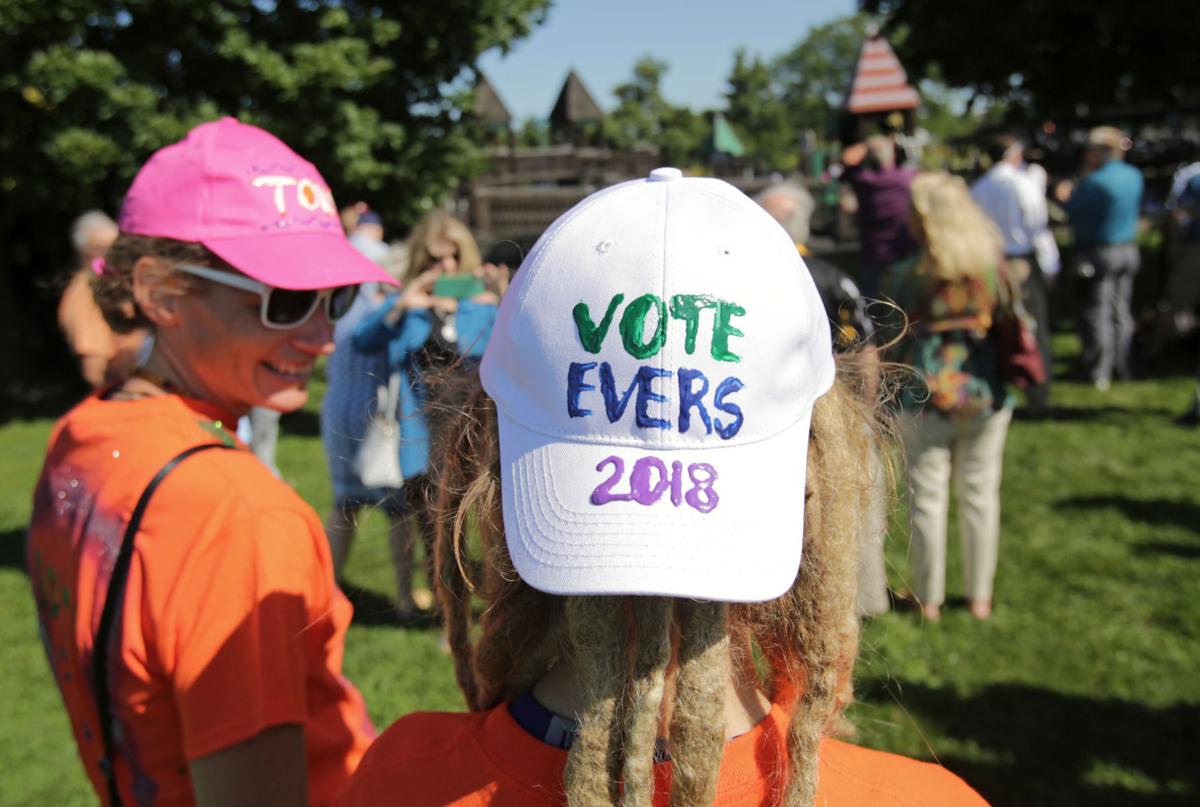 State Superintendent Tony Evers' grandson, Casey Schoenecker, 12, sports a "Vote Evers 2018" hat during an announcement that his grandpa is running for governor in 2018. 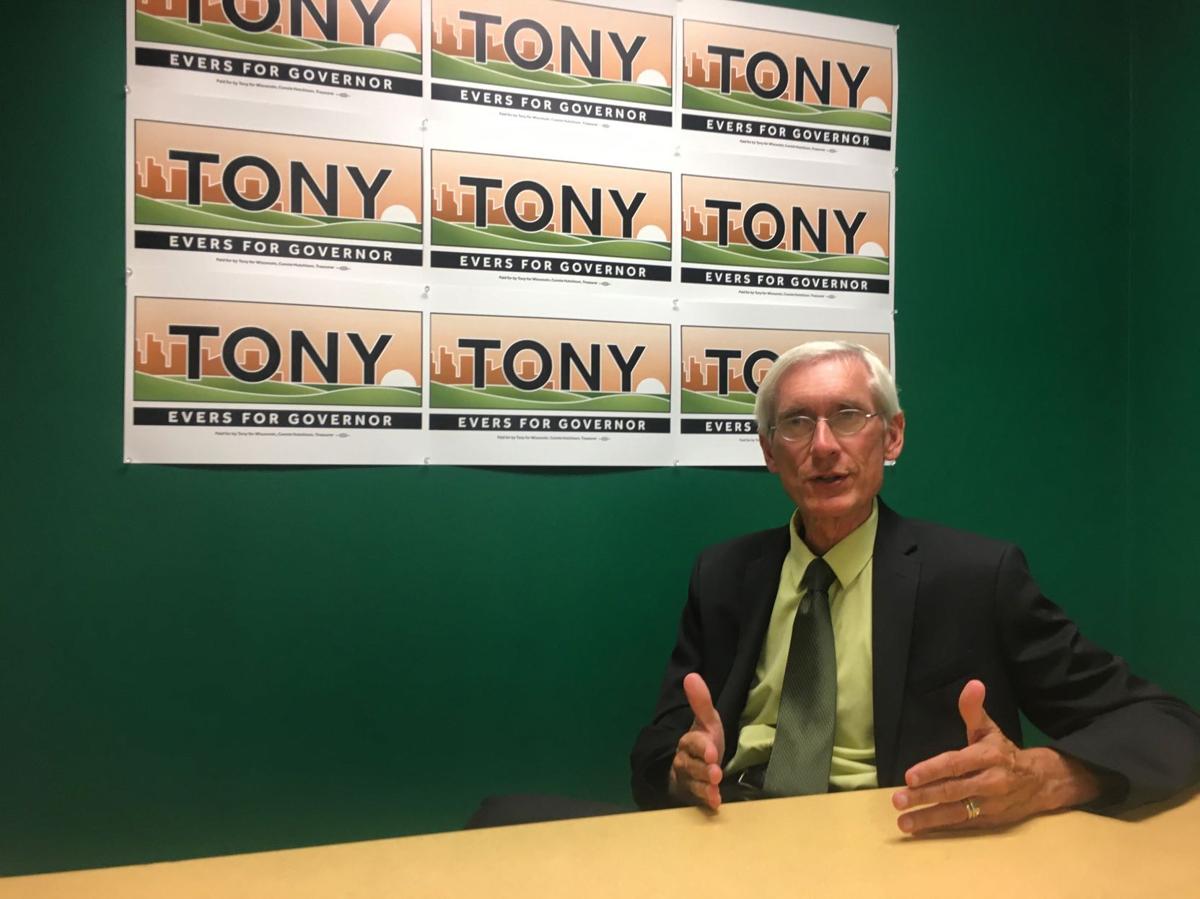 State Superintendent Tony Evers, shown here at his campaign office Tuesday, says he is running against Gov. Scott Walker in 2018 primarily because the state has become divided under Walker.

Evers, 65, said in an interview Tuesday that he’s running because of a pervasive divisiveness created by Walker, who he said is “pitting people against each other.”

“Bottom line is we are in desperate need of a change,” Evers said. “Clearly he’s failed on uniting our state. He started out talking about dividing and conquering and to this day we continue to face that. Families fighting with each other — my wife and her sister don’t talk to each other much. A small example, but it happens all across the state.”

Evers made his formal announcement in front of a playground in a Fitchburg park, saying he has seen “first-hand” the effects of Walker’s approach on school funding since taking office in 2011.

“Walker raided public education to fund tax cuts for wealthy corporations,” Evers said. “I’ve watched voters in hundreds of school districts across Wisconsin vote to raise their own taxes because Walker’s policies had not given them the resources they needed to do the job.”

Evers’ announcement comes four months after winning his third four-year term as the head of the Department of Public Instruction, which oversees Wisconsin’s 422 school districts and the state’s four private school voucher programs.

He said he chose to seek a higher office, in part, because of “inadequate resources” from the state to schools and higher education institutions, which he said has a negative impact on the state’s workforce.

In his first years in office, Walker cut millions of dollars from K-12 and higher education, or kept funding flat. He also has proposed $649 million in new funding for schools in the next two-year budget — part of an education funding plan that is higher than what Evers proposed earlier this year.

“Under Gov. Walker’s leadership, Wisconsin is a top 10 state for business and education, more people are working than ever before, and our future is bright with bold reforms making possible tens of thousands of family-supporting jobs through Foxconn’s historic investment,” Fadness said, referring to a proposal Walker has championed to convince the Taiwanese tech giant to build its first U.S. plant in Wisconsin.

“I think it’s plain as the nose on my face that most of those production jobs will be short-lived,” Evers said Tuesday, adding that state officials need to secure a promise from the company to train workers if their jobs are eventually replaced with robots. He also said on Wednesday he would seek to renegotiate the deal with Foxconn if elected.

Walker has not yet formally announced he will seek a third term, and Evers joins what could be a crowded field of Democratic candidates looking to challenge the governor.

“I have lived most of my life outside of the Madison bubble — probably more so than even the governor,” Evers said.

Evers was born in Plymouth and worked in or oversaw school districts in Tomah, Oakfield and Verona. He was first elected state superintendent in 2009.

Jake Hajdu, spokesman for Wachs, said Wachs is the only Democrat in the race who “has the background to win a general election against Scott Walker.”

Gronik said Wednesday the “high caliber of individuals considering a run for governor is a strong reflection of Scott Walker’s unpopularity and the deep divisions that he has created across the state.”

Evers said his time running school districts and regional and state agencies make him better suited than his Democratic opponents and Walker for overseeing state operations.

“Executive experience is a critical issue in this governor’s race — and to being governor,” Evers said. “You only need to point to Lincoln Hills as an example. How in the hell did that happen?”

The Lincoln Hills School for Boys and Copper Lake School for Girls, the state’s youth prison, has been under investigation for more than two years over allegations of abuse and sexual assault of inmates and has been at the center of a number of federal lawsuits.

Walker has been criticized for being slow to recognize problems at the facility and for not visiting it since the allegations surfaced.

“I don’t think he’s ever stepped foot in that place — how is that doing your job?” Evers said.

But Republicans are also criticizing Evers for decisions that “left children in danger.” The state party this week released an online ad attacking Evers for not revoking a license of a Middleton teacher who looked at pornographic materials at school and shared them with other teachers, and for a DPI software error that resulted in DPI unable to verify four-year graduation rates for 2016.

Evers said Tuesday he could not have legally revoked the teacher’s license and that he and the DPI “led the way” in changing state law to allow DPI to revoke licenses in similar incidents.

Evers has been backed heavily by teachers unions in his previous three races. Those unions were especially weakened by Act 10, which nearly eliminated their collective bargaining power and resulted in massive losses in membership and in money.

But Evers, who signed a petition to recall Walker over Act 10, stopped short of saying he would seek to repeal Act 10 if elected governor.

Evers said as governor he would make sure public employees have a “great opportunity for leadership positions” and “have a voice in their workplace” through employee advisory councils and requiring employees’ opinions of agency policies be considered by their bosses.

“If the Legislature approved a bill that would reinstate collective bargaining rights I, of course, would sign it but I don’t want to over-promise on something that I don’t believe is going to happen the first week I’m governor,” Evers said.

Evers also said he would:

What do you think of Tony Evers running for governor?

Could Tony Evers shake up the 2018 governor's race?

The thrice-elected state superintendent is the only potential Democratic candidate with a winning track record statewide.

Rep. Dana Wachs of Eau Claire said during a telephone interview that he believes government has devolved into a payback mechanism for special interest groups and he wants to be a voice for "regular folks."

"Just think if we invested that money in our schools instead," Evers says in the ad.

Plymouth native and Superintendent of Public Instruction, Tony Evers, has jumped into the governor's race as a Democrat to challenge Gov. Scot…

As a campaign issue, Act 10 likely will be more prominent in the Democratic primary than in the general, experts say, because the law has not proven to be at the forefront of voters' minds since it passed in 2011.

State Superintendent Tony Evers said Wednesday he is running to unseat Gov. Scott Walker because the governor's policies have divided the state and limited funding for K-12 and higher education.

State Superintendent Tony Evers addresses the media in Fitchburg after announcing he will seek the Democratic nomination for governor.

State Superintendent Tony Evers tells a crowd at Fitchburg's McKee Farms Park that he is running for governor in 2018 in part because Gov. Scott Walker has divided the state.

State Superintendent Tony Evers greets the crowd before announcing in McKee Farms Park in Fitchburg that he is running for governor in 2018.

State Superintendent Tony Evers' grandson, Casey Schoenecker, 12, sports a "Vote Evers 2018" hat during an announcement that his grandpa is running for governor in 2018.

State Superintendent Tony Evers, shown here at his campaign office Tuesday, says he is running against Gov. Scott Walker in 2018 primarily because the state has become divided under Walker.