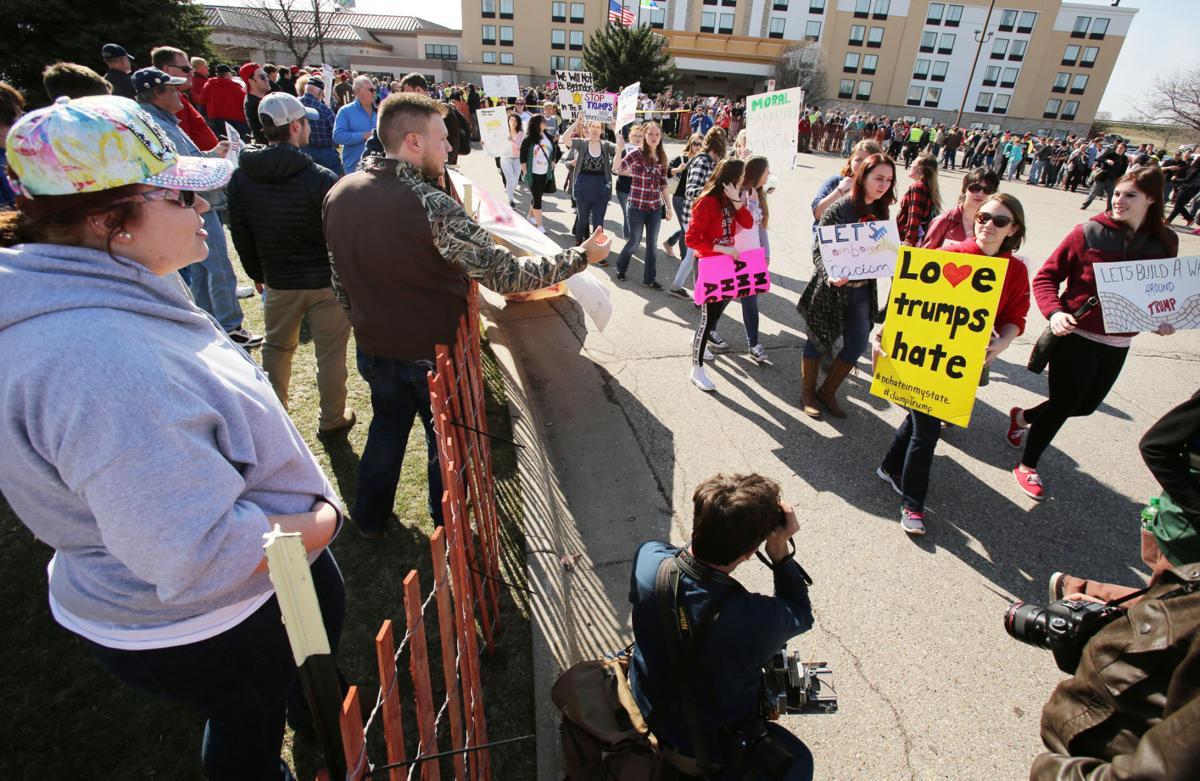 Protesters and supporters for Republican presidential candidate Donald Trump engage each other outside during a Tuesday rally at the Holiday Inn Express in Janesville. 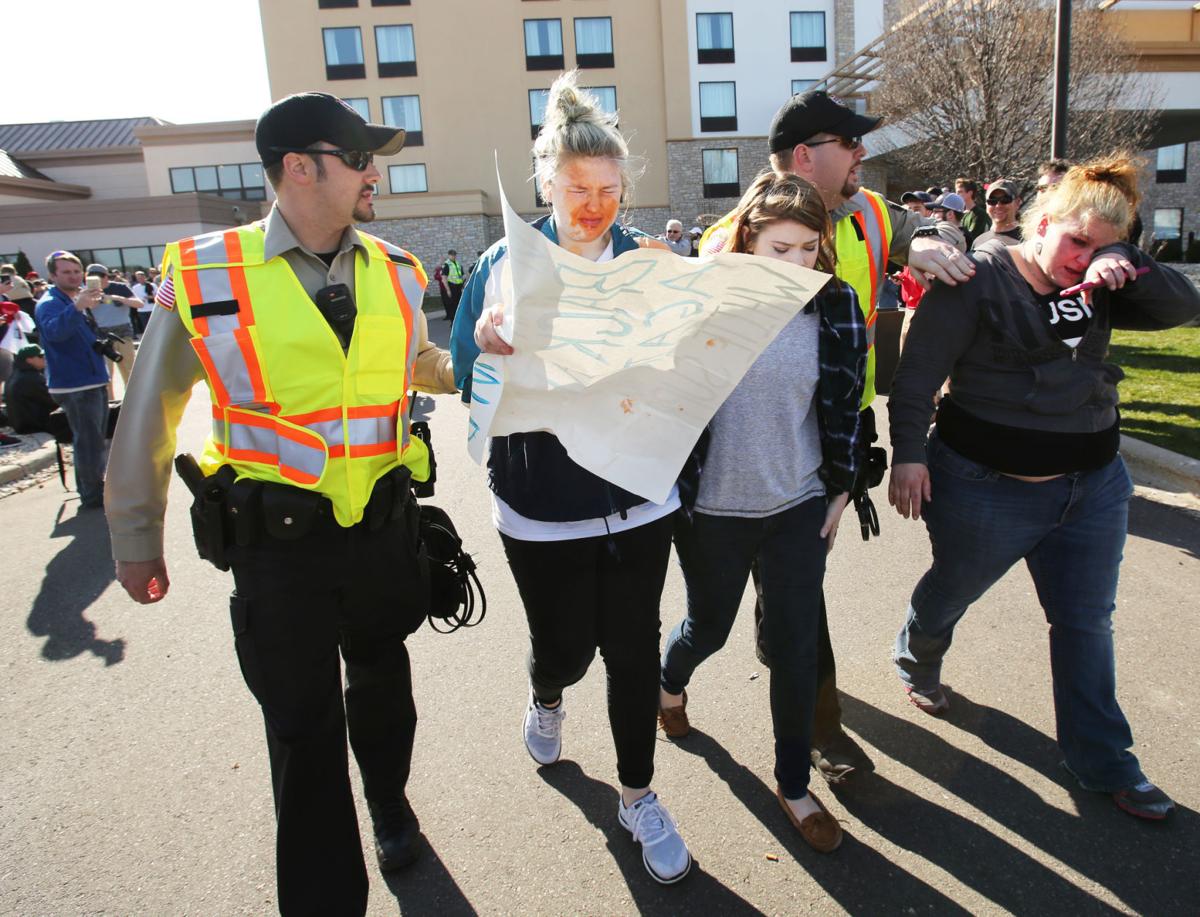 Police escort protesters after they were pepper sprayed during an altercation outside a rally for Republican presidential candidate Donald Trump Tuesday in Janesville. See story on Page A6

A girl is pepper sprayed after hitting a man during an altercation between supporters and opponents of Republican presidential candidate Donald Trump.

JANESVILLE — A 15-year-old girl from Janesville was pepper sprayed after punching a man during an argument outside of a campaign rally for real estate mogul and Republican front-runner Donald Trump in Janesville.

The altercation was one of a few tense moments between the estimated 2,000 supporters and opponents of Trump who were attending the rally at the Janesville Conference Center at the Holiday Inn Express.

The girl, whose face was covered with pepper spray as she left the hotel grounds, was there to protest Trump and began arguing with a man there to support him.

Janesville Police Chief David Moore said in a statement that the girl was pepper sprayed by a man whom police have not yet identified.

The girl and another 19-year-old woman from Madison also hit by the pepper spray were treated at local hospitals. The State Journal was not able to get their names Tuesday.

The girl said the man whom she punched had groped her, provoking the swing, police said.

The Trump supporter who was punched, Dan Crandall of Milton, and those in the crowd disputed her allegation.

“I didn’t touch her,” Crandall said in an interview.

Crandall said someone standing behind him then pepper sprayed the girl.

About 1,000 people were allowed inside the conference center to listen to Trump speak while another 1,000 remained outside.

That’s where supporters of Trump clashed with protesters, many of whom carried signs promoting Black Lives Matter. A handful of protesters were asked to leave the hotel grounds after disrupting the rally.

Moore said Tuesday a group of 350 law enforcement officers from Wisconsin and northern Illinois were on hand in case raucous crowds found at other Trump rallies emerged in Janesville. Moore said the Trump rally was the largest event in the city in recent memory.

Dozens of snowplows lined the I-90-39 exit ramp behind the hotel as a precaution against potential terrorist attacks, said Rock County Sheriff Robert Spoden.

Jamie Martinez, 59, of West Allis, was sitting outside of the hotel’s doors around 2 p.m. holding a sign promoting military veterans supporting Trump.

“I think he’s the one who could create the jobs we need,” said Martinez, who said he owns a cleaning service company but hasn’t worked in years. He said his customer base dried up completely about four years ago as people stopped spending money on cleaning services.

Also waiting to get into the event was Leslie Spears of Spring Grove, Illinois. Spears said the Janesville rally was her second — her first being a rally in Chicago that was ultimately canceled because of clashes between protesters and supporters.

Spears, who held a sign that said “Cats 4 Trump” with photos of her cats The Dude, Sam and Al Pacino, said she supports Trump because she’s been “voting for Republicans my entire life and have nothing to show for it.”

“Right now our nation is hanging on by a thread,” said Spears. “I want to restore fiscal sanity to this country.” Spears also said she supports Trump because she thinks “it’s insane people are coming here who don’t want to assimilate to our culture.”

Among the protesters were Erin Creed of Williams Bay and Claudia Felske of East Troy, who stood behind a barricade holding signs that said “Bigotry is the enemy” and “Love trumps hate.”

Creed said she came to “add my voice to the thousands of people who say Donald Trump doesn’t represent Wisconsin.”

“His message has been one of hate, and that’s not what we’re about here,” Creed said.

Six people also were arrested Monday night during a protest at the hotel.

The group was among about 80 people who jammed into the hotel’s lobby and front entrance. The six, all from Madison and part of a group called Showing Up for Racial Injustice, refused to leave when asked to do so by hotel management and police.

Percentage of respondents who would vote for candidates in the most recent Wisconsin polls.

Janesville police released two photos Wednesday of a man who detective Chris Buescher said is suspected of using pepper spray on a 15-year-old girl during an argument outside Donald Trump's Tuesday rally.

Police said they are still looking for man who pepper sprayed the girl after she punched another man at the Janesville rally.

It's all presidential politics all the time as Republican and Democratic candidates crisscross Wisconsin ahead of Tuesday's primary. Also, UW-…

The state has meaning for all five candidates and could be viewed as a turning point.

Six people were arrested Monday night during a protest at a Janesville hotel where GOP presidential candidate Donald Trump will hold a rally on Tuesday.

The presidential candidate told a Madison audience that he has the best shot at winning the White House, and is the one best suited to be president.

On Wisconsin talk radio, Donald Trump gets a rude welcome

The raucous interviews kicked off a week in which Trump is set to visit Wisconsin in advance of the state's April 5 primary.

Clinton also will deliver a personal rebuke to one of the GOP senators blocking a hearing: Sen. Ron Johnson, R-Oshkosh.

See how the candidates for president and U.S. Senate are faring in the latest polls of Wisconsin voters.

All of the presidential election coverage got us thinking about past trips to the polls. Wisconsin has one of the longest traditions of holdin…

Protesters and supporters for Republican presidential candidate Donald Trump engage each other outside during a Tuesday rally at the Holiday Inn Express in Janesville.

Police escort protesters after they were pepper sprayed during an altercation outside a rally for Republican presidential candidate Donald Trump Tuesday in Janesville. See story on Page A6

A girl is pepper sprayed after hitting a man during an altercation between supporters and opponents of Republican presidential candidate Donald Trump.