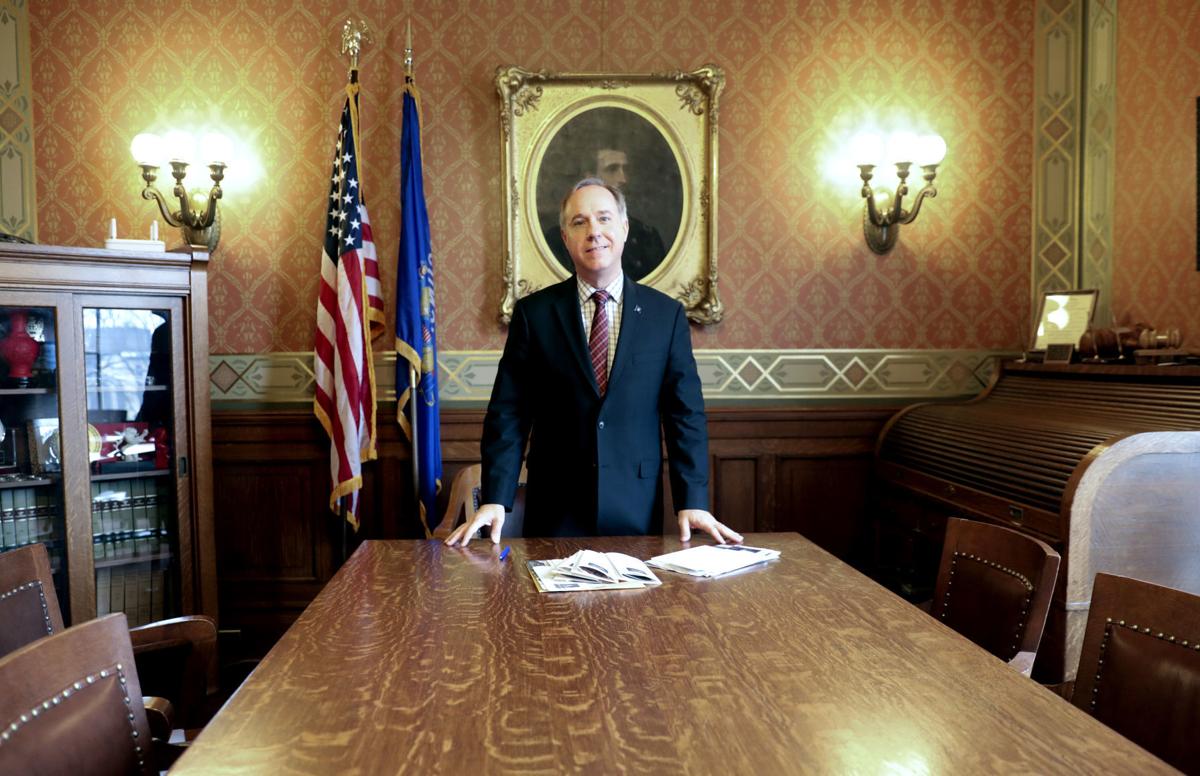 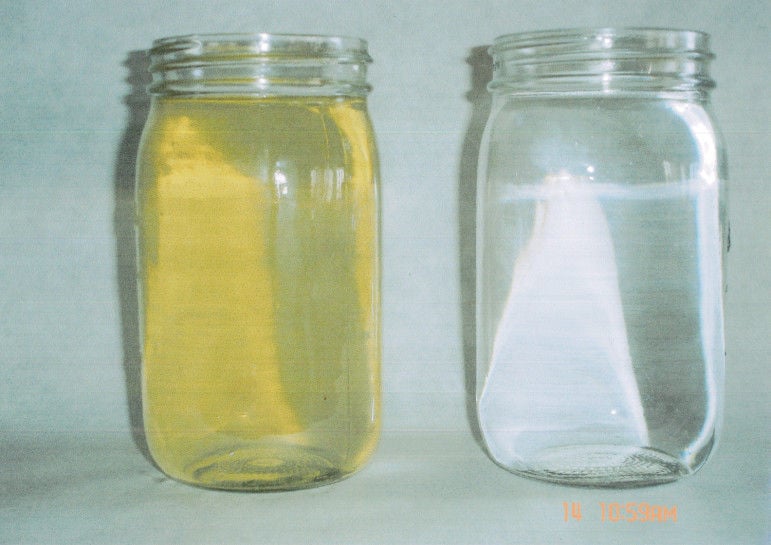 Wisconsin lawmakers said they would form a task force to study drinking water contamination. Above, yellow-brown well water that came from the tap in the home of Chuck Wagner, who lives in rural Luxemburg in Kewaunee County. He said testing linked the contamination to cattle manure. It cost him $10,000 to drill a new well free of contaminants.

A day after researchers reported that 42 percent of tested wells in southwest Wisconsin were contaminated, state Assembly Speaker Robin Vos said he would create a task force to study state water quality.

Vos’ announcement Thursday was prompted by formal requests from lawmakers in areas plagued by drinking water that is tainted by pollutants from agriculture and faulty septic systems that can cause illness or death.

Conservationists have complained that Vos, Gov. Scott Walker and their fellow Republicans who have controlled the Legislature since 2011 have failed to answer pleas from residents around the state whose well water is contaminated by hazardous pathogens and toxic nitrate.

“It comes as no surprise that Representatives (Travis) Tranel and (Todd) Novak are quickly responding to the needs of their Assembly districts,” Vos, R-Rochester, said in a statement. “I agree that the recent reports of water contamination in private wells in southwestern Wisconsin are disturbing. Every Wisconsinite should have access to safe, clean drinking water.”

Tranel is a Republican from Cuba City in Lafayette County. Novak is a GOP representative from Dodgeville in Iowa County.

The Wisconsin State Journal first reported Wednesday on initial findings of a study that found the pollutants in 301 randomly selected residential wells in Grant, Iowa and Lafayette counties.

The three counties funded the study — conducted by a U.S. Department of Agriculture microbiologist, a U.S. Geological Survey biologist and the state geologist — after Walker’s Department of Natural Resources declined to participate.

“It’s important the Legislature is taking steps to address the serious drinking water quality issues Wisconsin citizens face,” said Scott Laeser, water program director at the nonprofit Clean Wisconsin, which had asked the DNR to participate in the study.

Laeser said the state’s water problems were an urgent public health issue that demands science-based collaboration among state officials and all who have a stake in cleaning up Wisconsin’s water.

“We look forward to working with everyone to find real solutions to these problems,” Laeser said. “Unfortunately, this data reinforces an emerging pattern of underappreciated and underreported well water contamination across the state, from northeast to central Wisconsin, the La Crosse area, and now southwest Wisconsin.”

The Southwest Wisconsin Groundwater and Geology plans to sample more wells in the spring. Then, scientists will evaluate pathogens in the water to determine if they are the type that originated in dairy or swine manure, or from faulty septic systems.

Well tests conducted in November looked for E. coli and coliform, bacteria that signal the possible presence of other bacteria, viruses and parasites that can cause flu-like symptoms such as nausea, vomiting, fever and diarrhea. Symptoms can be mild to severe to life-threatening.

Testing was also done for nitrate, which causes potentially deadly methemoglobinemia, or blue-baby syndrome. A growing body of research links nitrate consumption to health risks in adults, including thyroid disease and cancer. Nitrate in drinking water usually comes from fertilizer.

The 42 percent contamination rate is higher than in some other parts of the state that have gotten more attention. But state geologist Ken Bradbury said the rate wasn’t surprising. It’s no secret that southwest Wisconsin has areas of thin topsoil and porous bedrock that allow surface pollutants to reach groundwater relatively easily.

About one-quarter of Wisconsin’s population drinks water drawn from over 800,000 private wells, and water quality problems are widespread.

“Unfortunately, there are other areas of Wisconsin facing a similar issue,” Vos said. “I have had numerous conversations with Rep. Joel Kitchens (a Republican from Sturgeon Bay in Door County) about water quality concerns in his area as well.”

Door County and neighboring Kewaunee County have high concentrations of large animal feedlots. The counties are part of a long swath of eastern, southern and western Wisconsin with fractured or porous bedrock that leaves the aquifer vulnerable to pollutants that infiltrate through soil from the surface.

The Central Sands area of the state is another that provides easy routes for pollutants to reach drinking water.

Kewaunee County residents have complained about contamination for at least a decade. After years of pressure from residents and the federal government, Walker in February approved an administrative rule with stricter standards for disposal of manure in 15 eastern Wisconsin counties.

The rule officially took effect July 1. However, the state hasn’t funded DNR enforcement of the new manure limits, and the state Department of Agriculture, Trade and Consumer Protection hasn’t taken initial steps in setting technical standards it says are required for implementation.

The scope of the rule was narrowed in response to opposition from the dairy industry. And last year the DNR didn’t heed conservation groups that argued southwest Wisconsin’s vulnerable drinking water should also be covered by the rule’s stricter limits.

Vos said he would disclose task force membership “in the coming weeks.” He didn’t respond to requests for comment.

Rule to protect drinking water from manure may face gauntlet

Industry lobbyists oppose the cost and question the practicality the rule, which is aimed at keeping manure out of 25,000 wells.

Monroe-based Bytec said it complies with its state permit. The DNR says it's no problem that the document doesn't list Bytec's biggest tank.

Big animal feeding operations would be scrutinized only after they polluted, and the state DNR would hand over regulatory duties to counties.

Conservationists say the rule is a compromise and a good first step toward protecting residents being sickened by tap water.

The DNR is proposing to pay $4.8 million for a conservation easement on 14,000 acres of rolling woodland in Iron County.

Could Wisconsin be the 'Silicon Valley of Water'? UW campuses trying to make it happen

Whether the launch begins July 1 or later is in the hands of the state Legislature because college officials say it cannot start the initiative without money from the 2019-21 budget.

"There is no law under which violators could conceivably be prosecuted because any such law would be clearly unconstitutional," said the president of the Wisconsin Freedom of Information Council.

Wisconsin lawmakers said they would form a task force to study drinking water contamination. Above, yellow-brown well water that came from the tap in the home of Chuck Wagner, who lives in rural Luxemburg in Kewaunee County. He said testing linked the contamination to cattle manure. It cost him $10,000 to drill a new well free of contaminants.