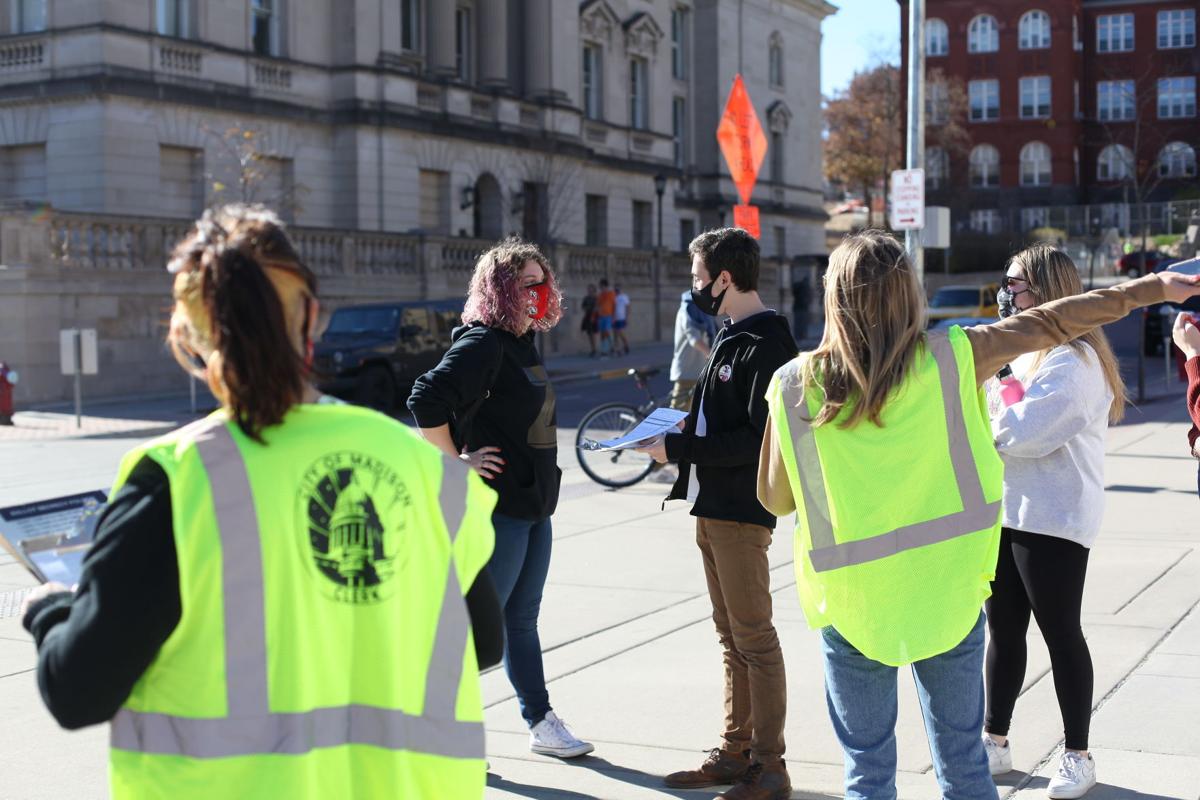 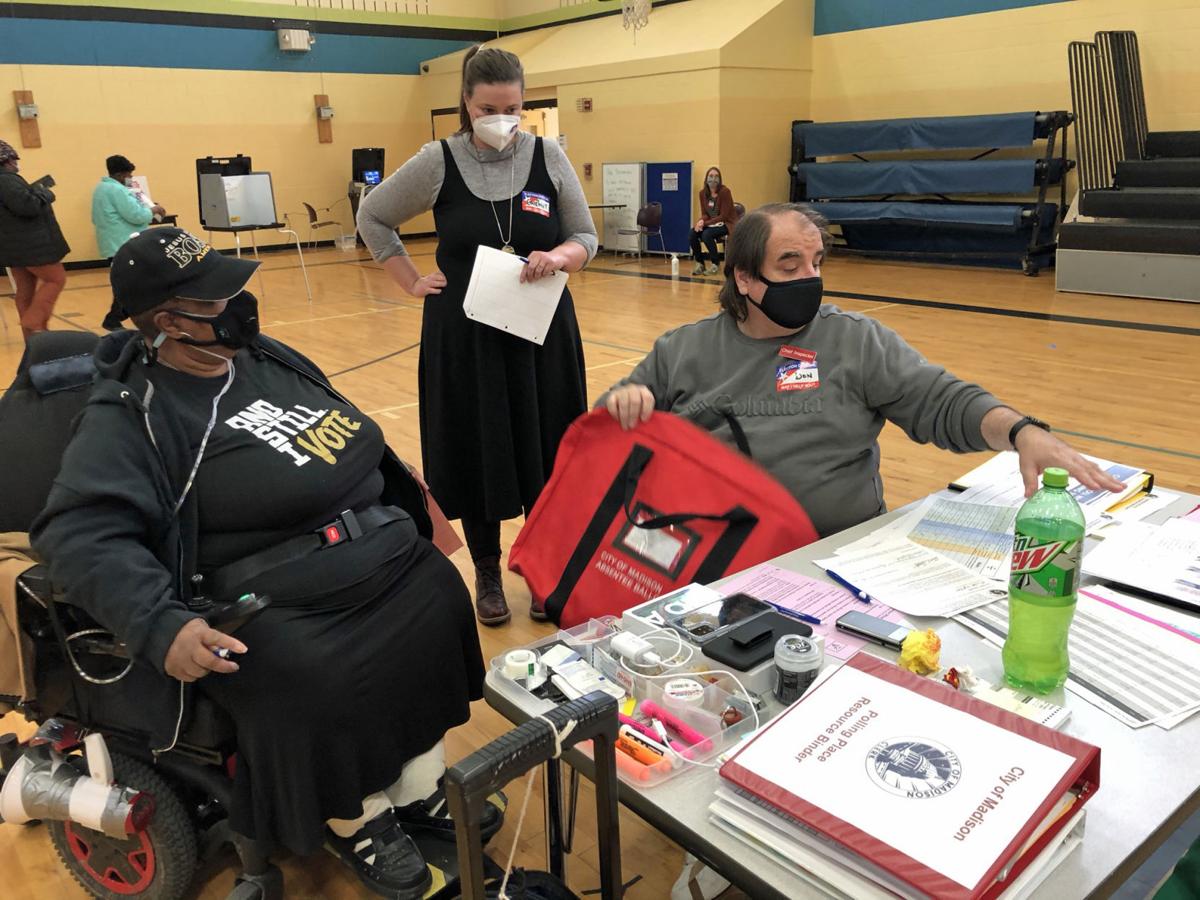 Chief inspector Don Eggert hands a sealed bag of absentee ballots to poll workers Alice Howard, left, and Courtney Bartunek to be counted Tuesday at the Boys and Girls Club polling place on Madison's South West Side. Howard and Bartunek were among Madison's 3,993 first-time poll workers.

Despite concerns that voting locations would be overwhelmed by the high number of absentee ballots that needed processing on Election Day, there was no shortage of poll workers in Madison Tuesday.

In fact, some local polling sites may have even had an excess of workers, driven by an influx of first time poll workers who stepped up to the plate amid the COVID-19 pandemic.

"I could do it, I'm healthy and I'm able to," said first-time poll worker Sophie Melnick.

Nearly three quarters, 3,993, of Madison’s 5,365 election workers were staffing the polls for the first time Tuesday, according to the city clerk’s office. In 2016, there were only about 2,600 poll workers, and just over a quarter were new.

“Most of them are people coming back,” she said.

Gov. Tony Evers activated 400 National Guard troops to serve as poll workers on an as-needed basis, but Wisconsin Election Commission administrator Meagan Wolfe said only about 220 were needed because local officials also have their own lists of reserve poll workers who can be called upon if there are shortages.

With the high levels of workers, as of 4 p.m., 89% of absentee ballots had already been processed in Madison, the city said.

Karen Jankowsky, 63, chief inspector for the Pyle Center voting location on UW-Madison’s campus, has worked as a poll worker at various polling sites since 2000. She said the number of poll workers this year was “at least double” from what it was in previous years.

“That’s been very helpful for our ability to calmly and carefully process absentees,” Jankowsky said.

Matt Giguere, 30, chief inspector at the Memorial Union polling site, said Madison “beefed up the staff” at all voting locations this election. He said in addition to the around 20 workers that were helping process ballots and help voters, there were also people on standby waiting to help if they became overwhelmed.

“Madison has definitely prepared themselves very well for handling the influx of absentee ballots,” Giguere said.

Lisa Stephenson was one of several poll workers at Meadowridge in Madison providing curbside voting, which allows voters to fill out a ballot and even register from inside their vehicles.

It was the first election for Stephenson, who said she signed up to take pressure off some of the older poll workers.

Chief inspector Peter Quinn said about two-thirds of his staff were new this year and most are significantly younger than the usual crew.

“We’ve had a lot of turnover because of the pandemic,” Quinn said. “We definitely have had a demographic shift.”

Sayles said the town had a great crew of veteran poll workers, including one woman with more than 50 years experience, but most didn’t want to risk getting sick.

Sayles said most of the new workers are much younger, including some high school students.

“The community has stepped up,” she said.

'Our voices should be heard': Pandemic, high anxiety fuel big turnout in Wisconsin

Aly Orvis, a 20-year-old UW-Madison student who was a first-time poll worker on campus, said she heard there was a shortage of poll workers and decided to step up to help so older people who are vulnerable to COVID-19 didn’t have to.

“In the past I’ve noticed a lot of the poll workers have been older, and I’m assuming they're at higher risk," Orvis said. "I thought it would be good for the people who are younger and have less of a chance to have the serious effects of COVID to be working and be in contact with everyone."

Jesse Laz-Hirsch, who worked at the Goodman Parks Maintenance Facility polling location, said he signed up to work because there was a call for poll workers who are young and not at higher risk for COVID-19. It also occupied his election day.

"I'd rather be doing something rather than sweating at home," Laz-Hirsch said.

UW-Madison students Rachel Reyes, 21, and Huong Nguyen, 19, also signed up to be poll workers on campus for the first time. Nguyen said she felt it was her "civic duty."

Courtney Bartunek and her husband signed up as poll workers earlier this year and were working Tuesday at the Boys and Girls Club on Madison’s Southwest Side. She said it was exciting to be part of a historic election.

“We all want to be part of this,” Bartunek said.

But tonight, it may take longer to see which way the state ends up voting.

Election Day 2020 is finally here. Here's what you need to know before you vote.

For those who have yet to vote, or those curious about when election results will be available, here are some common questions and answers regarding Tuesday's presidential election.

Records could fall as warm weather settles over southern Wisconsin

Highs could crack 70 for southern Wisconsin through Monday, with colder weather arriving Tuesday, according to forecasters.

State law allows a losing candidate to request a recount if the difference in votes is within 1%, and Donald Trump's presidential campaign has vowed to do so.

2020 has brought new responsibilities and increased visibility to the state’s 10,000 National Guard members.

Chief inspector Don Eggert hands a sealed bag of absentee ballots to poll workers Alice Howard, left, and Courtney Bartunek to be counted Tuesday at the Boys and Girls Club polling place on Madison's South West Side. Howard and Bartunek were among Madison's 3,993 first-time poll workers.