State of the State: Scott Walker vows to cut UW System tuition for in-state students
Share this
{{featured_button_text}}
1 of 3 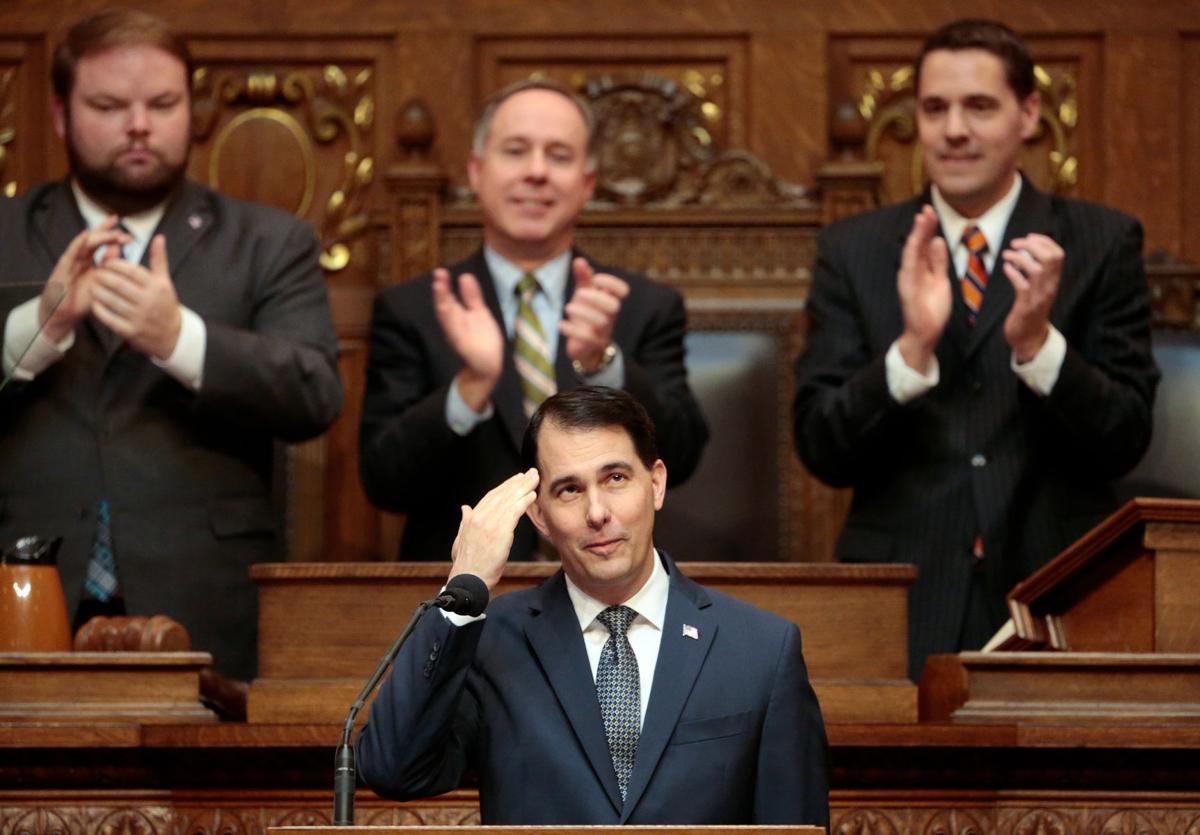 Gov. Scott Walker salutes special guests in the Assembly gallery at the beginning of his State of the State speech. Behind him, from left, are Assembly Speaker Pro Tempore Tyler August, R-Lake Geneva, Assembly Speaker Robin Vos, R-Rochester, and Senate President Roger Roth, R-Appleton. Walker announced he would cut tuition at University of Wisconsin System schools in his 2017-2019 budget proposal. 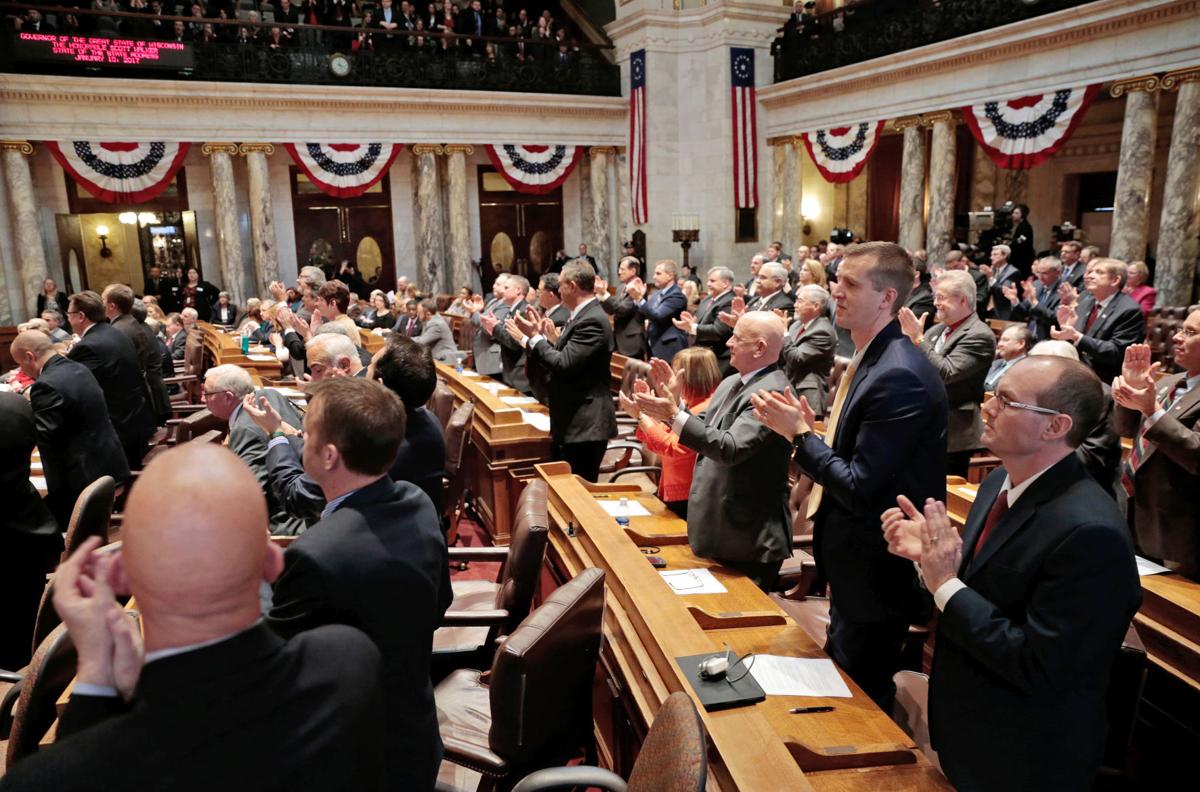 Republican lawmakers said they would like to see more details about Gov. Scott Walker's proposal to cut University of Wisconsin System tuition. 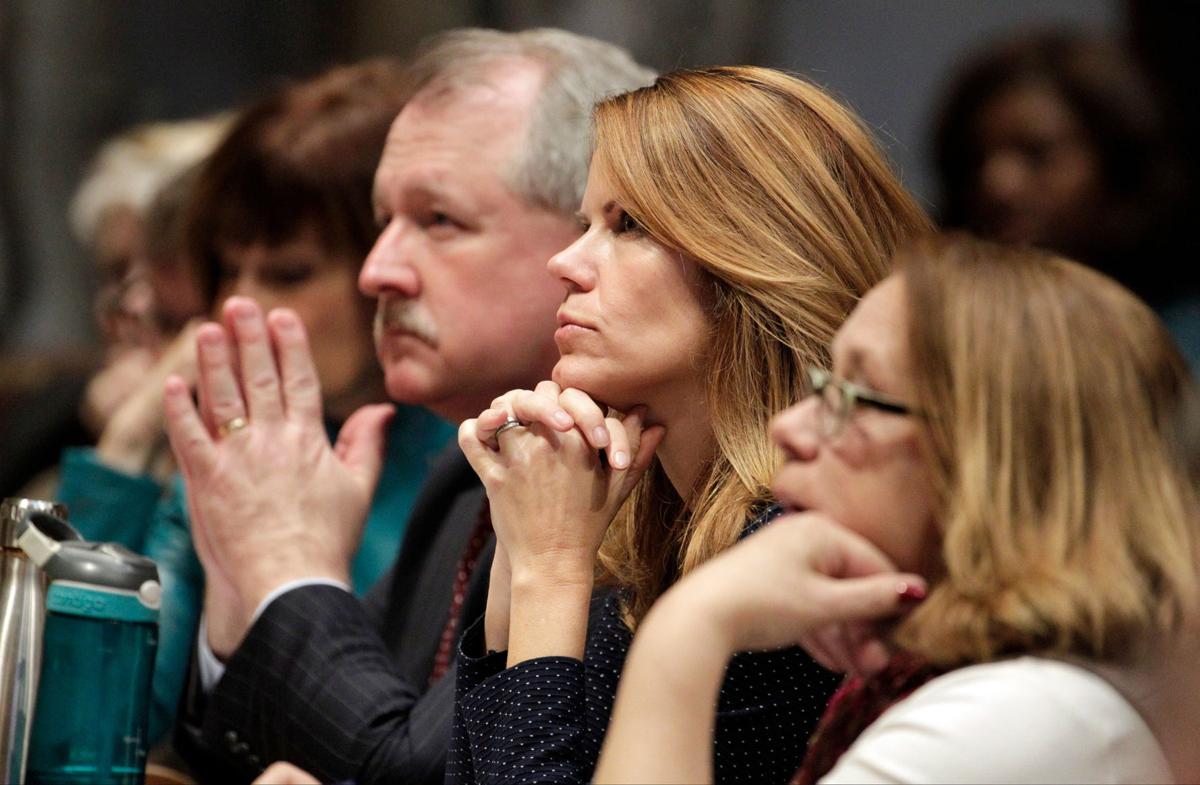 Rep. Chris Taylor of Madison, center, and other Democrats listen as Gov. Scott Walker delivers his State of the State address in the Assembly chamber.

Gov. Scott Walker said during his seventh State of the State address Tuesday he will cut in-state tuition at all University of Wisconsin campuses in his upcoming budget proposal.

The proposal, hinted at in Walker’s previous public statements, could set up another conflict with UW officials, who have weathered a four-year tuition freeze and a $250 million cut in the previous budget. They hoped to see state aid increase $42.5 million in the next budget and proposed increasing tuition in 2018-19 by the rate of inflation.

“It wasn’t just students who are concerned about the cost of higher education,” Walker said, referring to his meetings last year with state residents. “It is parents, grandparents, educators and many others.”

Walker said after the speech the tuition cut will be covered with additional state taxpayer dollars. Republican leaders of the Legislature’s budget committee reserved judgment until seeing more details.

Rep. Dale Kooyenga, R-Oconomowoc, cautioned against cutting tuition to the point where non-college-educated workers are subsidizing college for those with higher earning potential.

“Does it make more sense to do tax cuts?” Kooyenga said as an alternative to lower tuition. “Because you get to a point where you don’t want to go to Bernie Sanders-level free school and then have the hard-working people of Wisconsin subsidize.”

UW-Madison Chancellor Rebecca Blank said she hopes lawmakers will not only cover the tuition cut, but also increase state funding “in line with the modest request made by the Board of Regents, which is critical if we are to continue providing an outstanding educational experience to our students.”

Assembly Speaker Robin Vos, R-Rochester, said Tuesday he is in favor of raising state aid for the System by $42.5 million but reiterated it should be contingent on requiring the speakers who come to campus and the programs that are offered at UW schools cater to conservative students as well as liberal students. Vos said how adequate diversity would be measured is something he and other lawmakers will need to figure out as the budget process continues.

Assembly Minority Leader Peter Barca, D-Kenosha, was skeptical of Walker’s proposal to cut UW System tuition for in-state students. He said Democrats would support such a measure if paired with an increase in state aid that gave the System a net funding increase. But Barca said Walker’s record of cutting UW funding suggests that’s unlikely.

“We cannot continue down the road of continuing to cut university budgets,” Barca said.

In the 36-minute speech, Walker underscored the state’s recovery from the Great Recession while repeating “we are working and winning for Wisconsin.”

“Are the people of Wisconsin — you, me, us — better off than we were six years ago? The answer is a resounding yes,” Walker said, after highlighting examples of people who have found jobs in the state.

In addition to the UW tuition freeze, Walker pointed to the state’s low unemployment rate and high workforce participation rate, more than 21,000 food stamp recipients who have participated in the state’s job training program and tax cuts that have cumulatively totaled $4.7 billion since 2011.

That’s based on a family of four in 2014 earning $85,859, according to the Department of Revenue. The median household income in 2015 was $55,638. The total $4.7 billion tax cut includes other changes that have benefited businesses, property owners and the wealthy.

Aside from the tuition cut, Walker’s speech didn’t include many other new details about his upcoming 2017-2019 budget proposal. The governor will deliver his biennial budget address in a few weeks.

Walker mentioned many of the proposals he has already announced, such as a “significant increase” for K-12 schools, a $35 million request for rural broadband grants and $65 million more in new aids for local road repairs, which he said was the largest increase since the 1990s.

State Superintendent Tony Evers said the discussion about school funding is on better footing than the “doom and gloom” atmosphere that surrounded the start of the 2015-17 budget cycle.

In the middle of Walker’s address, First Lady Tonette Walker spoke about a program aimed at helping children affected by family trauma. It was her first time speaking at State of the State, Walker spokesman Tom Evenson said.

Walker moved the traditionally prime-time speech to a joint session of the Legislature to 3 p.m. in deference to President Barack Obama delivering his farewell address Tuesday night. Wisconsin’s last daytime State of the State address was delivered by Gov. Tommy Thompson in 1993, according to Senate chief clerk Jeff Renk.

The speech comes as a new national political landscape emerges in Washington, where President-elect Donald Trump will be sworn in as the 45th president next week. Walker has asked Trump to give more control to the state in areas such as Medicaid and transportation spending, drug testing for food stamp recipients, limiting the resettlement of refugees and hunting gray wolves.

Walker’s repeated talk of “winning” was a twist on Trump’s claims about the country that “we don’t win any more” and promises to supporters that they will get sick of winning under President Trump. Walker is up for re-election in November 2018, but hasn’t said whether he will seek a third term. His job approval rating dipped to historic lows during his failed run for president in 2015.

Democrats, still reeling from the loss of an additional Assembly and Senate seat in the November election, called Walker’s speech a “State of Denial” address and rejected his premise that the state is better off.

They pointed to an impasse over shoring up the state’s transportation fund shortfall. Walker has refused to increase the state’s gas tax, while continuing to borrow money to pay for the state’s road repairs. Walker said the “safety and maintenance of our existing transportation system is a priority.”

Democrats also cited an ongoing federal investigation into abuse allegations at the state’s Lincoln Hills juvenile prison and complaints of neglect and staffing shortages at the state-run veterans home in King.

And though the state has enacted nearly $5 billion in tax cuts since Walker took office, the state’s economy and job creation have continued to trail the nation and neighboring states. Meanwhile, the state budget is again pinched by slow tax revenue growth and increasing costs for roads and health care.

“As Governor Walker begins his 7th year in office, it has become clear that he is unwilling or unable to address the bigger challenges facing Wisconsin now and in the future,” Rep. Gordon Hintz, D-Oshkosh, said in a statement. “The Governor has become a weak leader at a time when we need bold leadership.”

Walker is scheduled to speak in La Crosse, Eau Claire, Green Bay and Milwaukee on Wednesday.

Gov. Scott Walker delivered his seventh State of the State address Tuesday afternoon to a joint session of the Legislature in the state Capitol.

The session will take up bills recommended by a legislative committee.

The governor has an optimistic outlook after two years in which his approval level and presidential dreams tanked.

The governor shared some details of his 2017-19 budget proposal in a 20-minute interview with the State Journal.

For the cut to be effective, one expert warned lawmakers must follow through with Walker's pledge to increase state funding to make up for lost tuition revenue.

OUR VIEW: Speaker understandably rolled his eyes and shook his head when Gov. Scott Walker touted his transportation budget

Current law allows government entities to require the agreements, which can make contractors to enter into collective bargaining agreements if they bid on public works projects.

Republicans are not usually the party of the sliding scale in government.

Rebecca Blank: University of Wisconsin at 'crucial point' with next state budget

Blank's speech laid out the case she and UW-Madison's supporters are making to lawmakers as they craft the 2017-19 budget: The university needs more funding.

Walker touted low unemployment and new spending on education, plus a tax credit that would offer $100 per child.

Gov. Scott Walker salutes special guests in the Assembly gallery at the beginning of his State of the State speech. Behind him, from left, are Assembly Speaker Pro Tempore Tyler August, R-Lake Geneva, Assembly Speaker Robin Vos, R-Rochester, and Senate President Roger Roth, R-Appleton. Walker announced he would cut tuition at University of Wisconsin System schools in his 2017-2019 budget proposal.

Republican lawmakers said they would like to see more details about Gov. Scott Walker's proposal to cut University of Wisconsin System tuition.

Rep. Chris Taylor of Madison, center, and other Democrats listen as Gov. Scott Walker delivers his State of the State address in the Assembly chamber.