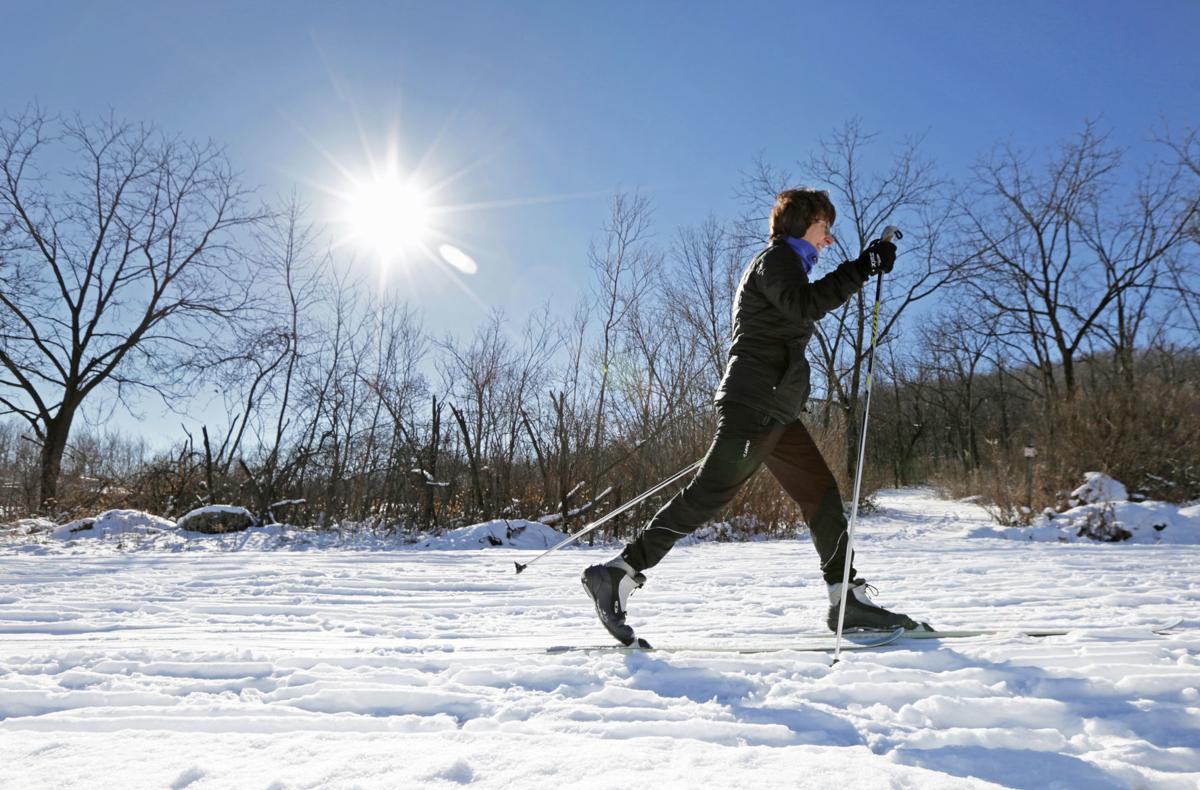 Cross-country skiers and snowmobilers both want access to the Stower Seven Lakes State Trail in Polk County. Above, a skier in Blue Mound State Park after a judge threw out DNR plans to add a snowmobile route near cross-country trails there. 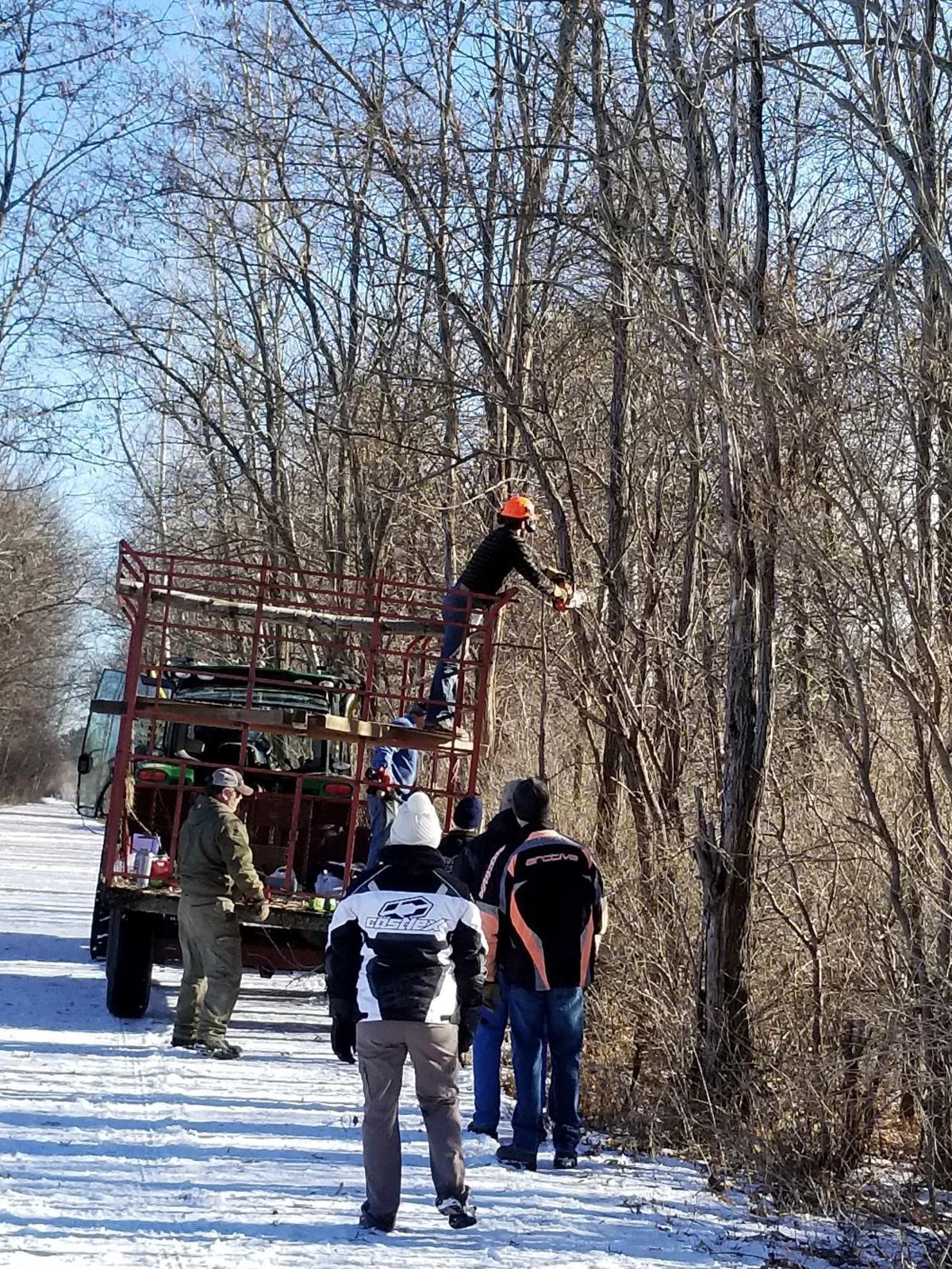 Under a controversial Polk County directive issued in mid-December, brush and tree limbs were cleared along much of the Stower Seven Lakes State Trail to make way for snowmobile traffic. This photo was taken Sunday and submitted by a trail friends group that says motorized access will make the trail unsafe and drive away silent sports enthusiasts. 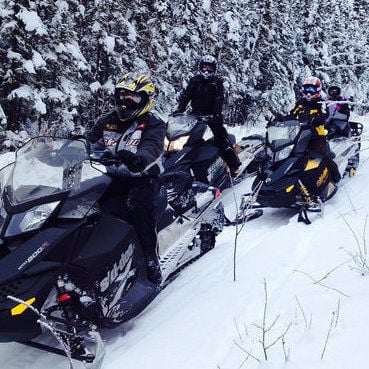 Snowmobile users are gaining access to a state cross-country trail in Polk County.

Cross-country skiers and other silent sports enthusiasts say they are being crowded off certain state trails in northern Wisconsin by government leaders who say they must share the routes with snowmobiles and all-terrain vehicles.

A lawyer for skiers, hikers and bicyclists on Friday put Polk County on notice about “significant safety concerns” they say are being created by adding snowmobile access to a ski trail with a surface that is 10 feet wide along most of its 14-mile route.

Meanwhile, snowmobile enthusiasts have been clearing brush and tree limbs to open up space for their machines on the former railroad bed where for 15 years the winter still has seldom been broken by anything louder than skis schussing on snow.

The Polk County Board late last year approved adding snowmobile and ATV access to the 14-mile Stower Seven Lakes State Trail, which wends through woods and farm fields from Amery most of the way to Dresser near the Minnesota border.

In December, the county administrator gave snowmobilers the go-ahead to rev their engines as soon as there is enough snow amid misgivings voiced by state officials.

“Unfortunately we don’t have enough snow to open it for snowmobiles yet,” Jeffrey Fuge, interim county administrator, said last week.

Legal action is being threatened by the skiers who for years have been grooming and maintaining the route as volunteer members of the Friends of Stower Seven Lakes State Trail group, and who say it’s unrealistic to think skiers and snowmobilers will be able to use the same route.

“I can’t see how you can have both safely,” said Bill Zager, past president of the friends group. “You know what will happen — the non-motorized people just won’t go there anymore.”

But Doug Johnson, vice president of the Polk County Snowmobile & ATV Council, said he’s been waiting patiently for 15 years to take his snowmobile on the trail.

Ideally, someone will come up with money to clear and reconfigure the rail corridor so it can accommodate everyone. He acknowledged that skiers are unlikely to keep coming after the snowmobiles start running.

“The snowmobiles bring speed, noise, exhaust (and) their manufacturers suggest riders wear safety gear, helmets and ear plugs,” Waalen said. “They need helmets because these things sling things up in the air behind them — and you’re putting those things within reach of a person with no safety gear? It defies logic.”

The friends group also has concerns about safety and noise if the county approves a proposal to add ATVs to its part of the 98-mile Gandy Dancer State Trail, which now is used by hikers and bicyclists when there’s no snow. Snowmobiles already have winter access there.

For the Stower trail, the County Board also approved access for motorized all-terrain vehicles, but that part of the plan is on hold. The state Department of Transportation told the county that ATV access would require it to repay $599,246 in federal money it spent to develop the trail.

The money can be used for trails accommodating silent sports and snowmobiles, but not ATVs, Fuge said.

While the County Board intends for the Stower trail to be “dual purpose” — open to motorized and nonmotorized users — there isn’t a plan for how it could be done safely and without driving silent sports away, Fuge said.

In 2003, the state took possession of the abandoned Wisconsin Central Limited railroad right of way that is now the Stower trail. The right of way is generally 100 feet wide, but much of the land is woods or wetlands. There are sharp slopes on either side of a 10- to 14-foot-wide trail surface where the railroad tracks once ran.

A number of state trails are officially open to motorized and nonmotorized activities. But Fuge, Johnson and officials of the state Department of Natural Resources were unable to point to a trail where both types of activities take place side by side.

Researchers have found the motorized recreational vehicles drive other users away.

Under state administrative code, state parks and trails are supposed to be planned so that conflicting activities are kept apart. Those regulations were the basis of a lawsuit that forced the DNR to rescind plans for snowmobile routes near ski trails in Blue Mound State Park.

After years of lobbying by ATV and snowmobile manufacturers, Gov. Scott Walker and the Legislature in 2015 instructed the DNR to find more motorized access, but the planning regulations have made it difficult.

A 2004 state plan for the Stower trail anticipated use by snowmobiles and ATVs. Polk County was to manage the state-owned trail under a legal agreement. But there was controversy about trail uses, and a 2008 lawsuit invalidated the original plan.

As the county struggled to write its own plan, cross-country skiers were using the corridor.

In recent years, snowmobile and ATV groups statewide were persuading local governments to open routes for them.

In Polk County in 2016, the County Board dropped to 15 members from 25, and new members were elected.

“It was hard to get the old board to move on anything,” the snowmobile and ATV council’s Johnson said. “Now it’s a little more streamlined and some of the people on the board now are a little more knowledgeable than in the past (when members were) mostly farmers in their 60s, 70s or 80s.”

Waalen said the county skirted the state planning regulations. The friends group wasn’t able to get the DNR to set things straight, Waalen said, so the group hired Christa Westerberg, a Madison attorney whose lawsuit forced the DNR to drop its 2016 plans for snowmobile trails in Blue Mound State Park.

In a Nov. 9 letter, Westerberg urged the county to reconsider its Stower trail plan, and later that month the DNR told the county it hadn’t gathered enough public input for its plan, and it failed to describe how snowmobiling and skiing could coexist. The county was asked to respond within 60 days.

In December after Fuge directed county staff to allow snowmobilers access to the trail, the DNR questioned the move. A letter from DNR state parks director Ben Bergey also stated that the department could terminate county management of the trail if it didn’t address concerns about its trail plan by the end of January.

The Friends of Wisconsin State Parks has been examining DNR park planning. Michael McFadzen, the umbrella group’s policy committee chairman, said there are problems at some of dozens of state trails managed by counties.

The statewide friends group may suggest that the state give DNR more authority so short-term local political changes don’t cause state trails to flip-flop between nonmotorized and motorized activities, McFadzen said. Volunteers invest years of time and money in improving trails, which can be damaged by motorized use, he said.

But the Kohler golf course will change the scenery of the Lake Michigan park and add to traffic and parking congestion, the DNR said.

Despite setbacks, Wisconsin tries another way to expand ATV use in park

A master plan variance could be approved by a DNR manager, without a public vote by the agency's policy board.

Some of the challenges facing new DNR secretary Preston Cole will be on the Natural Resources Board agenda this week.

Cross-country skiers and snowmobilers both want access to the Stower Seven Lakes State Trail in Polk County. Above, a skier in Blue Mound State Park after a judge threw out DNR plans to add a snowmobile route near cross-country trails there.

Under a controversial Polk County directive issued in mid-December, brush and tree limbs were cleared along much of the Stower Seven Lakes State Trail to make way for snowmobile traffic. This photo was taken Sunday and submitted by a trail friends group that says motorized access will make the trail unsafe and drive away silent sports enthusiasts.

Snowmobile users are gaining access to a state cross-country trail in Polk County.