In the second judicial rebuke to state Republican legislators in less than a week, another judge has blocked parts of GOP laws limiting the powers of Democratic Gov. Tony Evers and Attorney General Josh Kaul.

It compounds the legal woes for Republican lawmakers who, along with former Gov. Scott Walker, enacted the laws just before Evers and Kaul took office. In a separate case last week, Dane County Judge Richard Niess blocked all of the laws from being enforced.

Remington’s ruling was more narrow, leaving parts of the laws intact. Republican lawmakers noted that while pledging to appeal other parts of the ruling. They contended the laws ultimately will withstand a barrage of legal challenges.

Tuesday’s ruling came in response to a lawsuit by a group of labor unions contending parts of the GOP laws violate the constitutional separation of powers between the legislative and executive branches.

Remington, a Walker appointee, halted enforcement of a key provision of one of the laws that gave lawmakers, instead of the governor, final say on whether the state attorney general ends or settles the state’s involvement in a lawsuit. His ruling also suspended a measure that allowed a legislative committee to effectively block administrative rules advanced by the governor from taking effect.

“The Legislature has the power to change the responsibilities assigned to the Attorney General, but it may not castrate his/her ability to act as the lawyer for the State of Wisconsin nor can it constitutionally usurp the power of the executive branch,” Remington wrote in the 49-page ruling.

Remington’s ruling also appeared to respond directly to Republican lawmakers who justified the laws as simply giving them a “seat at the table” with Evers.

“Even the casual observer cannot miss the fact that this ‘rebalancing’ of power, and the defendants’ repeated demand for ‘a seat at the table,’ was not considered until the voters elected a Democratic Governor and Attorney General,” Remington wrote. 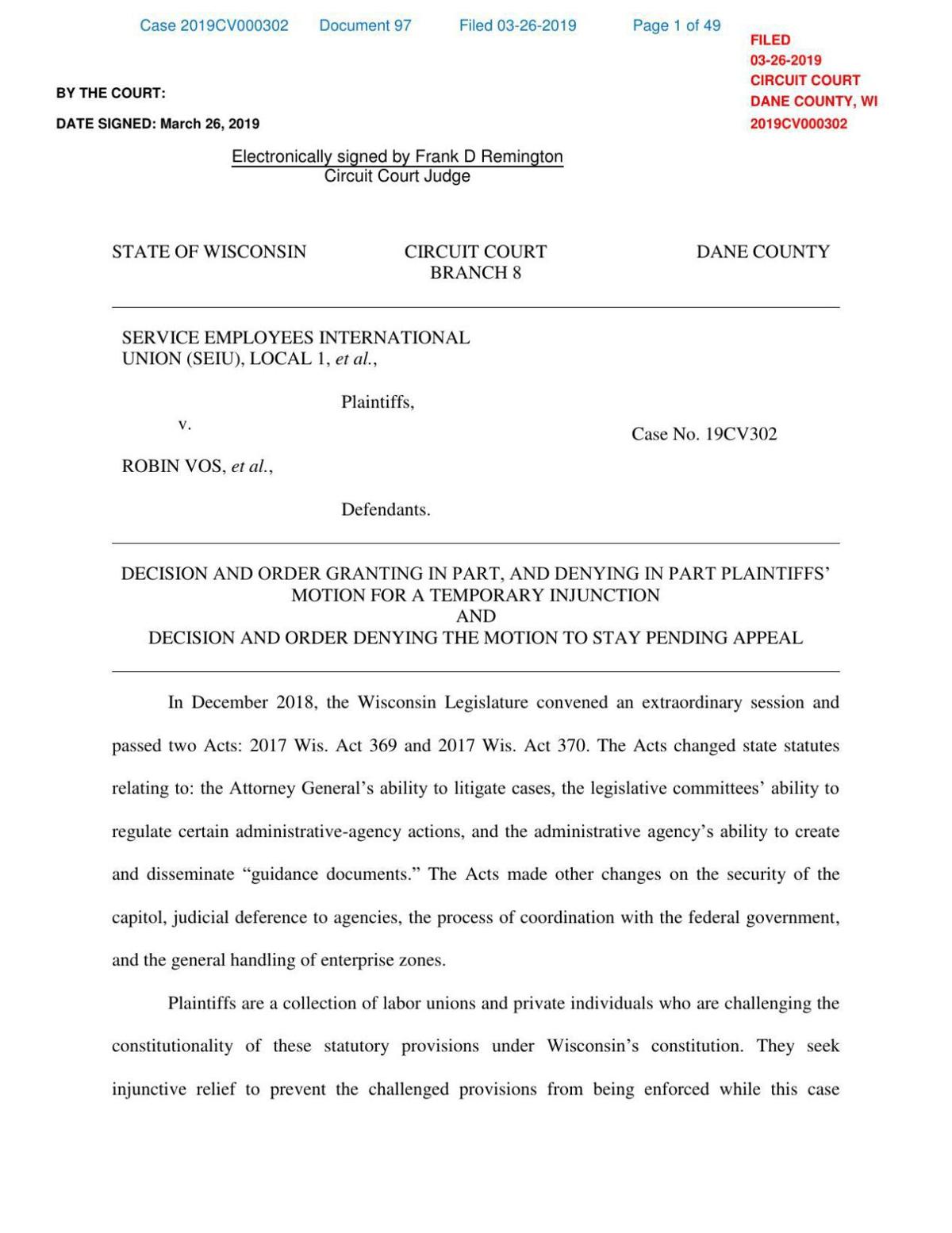 The ruling rejects requests by plaintiffs in the case to halt other provisions of the laws, including one permitting lawmakers to intervene in court cases that involve a challenge to state law. However, those provisions remain on hold while an appeals court considers whether to stay Niess’ ruling from last week.

“However, all of the Legislature’s actions are consistent with the separation of powers that the Wisconsin Supreme Court has upheld for decades,” Fitzgerald and Vos said. “We will appeal this decision.”

Evers issued a statement saying the decision “upholds our constitution’s separation of powers, which has guided this state since 1848.” He added that the ruling shows it is “time to move beyond this chapter.”

“It is now abundantly clear that the lame-duck session was nothing more than an illegal power grab intended to override the will of the people,” Evers said.

The hearing unfolded as the state Capitol was still grappling with the ruling on Thursday that suspended all three of the GOP laws enacted in an extraordinary session in December. In that decision, Niess ruled the extraordinary session was not allowed by the state constitution, and he issued a temporary injunction barring enforcement of the legislation.

Plaintiffs in that case included the League of Women Voters of Wisconsin, Disability Rights Wisconsin and Black Leaders Organizing for Communities.

By targeting the session in which the laws were passed, that ruling vacated 82 appointments by Walker to state councils, boards and other bodies that senators confirmed during the December extraordinary session. Evers has said he plans to redo those appointments.

Evers and Kaul also moved quickly after last week’s ruling to seek to withdraw Wisconsin from a multi-state legal challenge to the federal health care law known as Obamacare, which one of the laws previously barred them from doing.

There are two additional ongoing legal challenges to the GOP extraordinary session laws. A federal judge backed one of them, a challenge to one of the laws’ restrictions on early voting.

The other suit, filed in federal court by the Democratic Party of Wisconsin, contends the laws violate the rights of Democratic activists and voters who elected Evers. That case has yet to have a court hearing.

The second lawsuit contends the laws violate the state constitution’s separation of powers between the legislative and executive branches.

Tony Evers could re-appoint some appointees of Scott Walker

The governor said some of the appointments could include people former Gov. Scott Walker appointed.

In the request filed Friday morning, Misha Tseytlin, an attorney for GOP lawmakers, argued the "indefensible injunction" issued by a Dane County judge Thursday "is already causing serious harm to our state."

Evers' attorneys said he supports a request by a group of unions in one of the other legal challenges to the GOP laws, asking a judge to block parts of them from taking effect.

While most of those Gov. Scott Walker appointees would be able to resume their roles, 15 positions, including some higher-profile appointees, remain in limbo, including UW System Regent Scott Beightol and Ellen Nowak, who served as commissioner of the Public Service Commission. Evers did not include those positions on the list of re-appointments.

The state's course of action means many able-bodied Wisconsinites will eventually need to volunteer or engage in work-related activities or risk losing their medical coverage unless the federal government determines the state's law cannot stand.

The case challenges the lame-duck laws Republicans passed in December 2018 to curb powers of the governor and attorney general.