The decision not to appeal was revealed in a high court filing by the Department of Justice, which represents Walker, Wednesday evening stating the governor would not ask the Supreme Court to overturn the appeals court decision. In an earlier court filing, DOJ indicated Walker planned to call the special elections for June 12 if his appeal was unsuccessful, but there was no official statement about the date of the elections late Wednesday.

“Representative government and the election of our representatives are never ‘unnecessary,’ never a ‘waste of taxpayer resources,’ and the calling of the special elections are as the Governor acknowledges his ‘obligation’ to follow,” Reilly wrote.

The lawsuit was filed by a national Democratic group led by former U.S. Attorney General Eric Holder. Democrats have argued that Walker delayed calling the elections over fear Republicans would lose them; Walker has said he is saving taxpayers money. 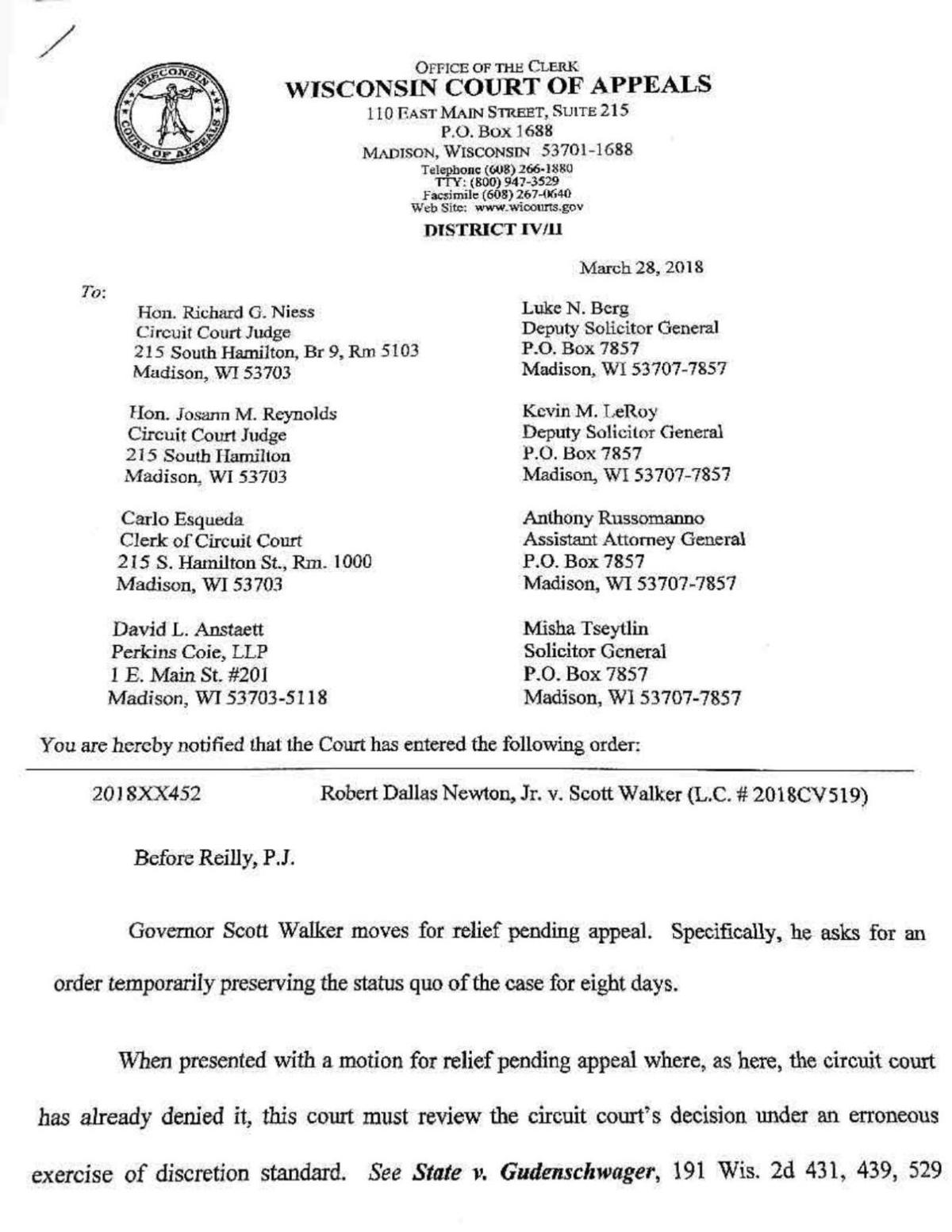 The commission doesn’t have an estimate for how much a separate special election in January cost. Spokesman Reid Magney said the commission stopped tracking costs last year after commissioners discontinued the practice because state law doesn’t require it to do so.

Meanwhile Wednesday, lawmakers moved forward on legislation to change when a governor must call a special election. Senate Majority Leader Scott Fitzgerald, R-Juneau, who has pushed the legislation, could not be reached late Wednesday after Walker’s decision not to seek Supreme Court relief.

Outside of Dane County

DOJ had filed Walker’s appeal in the 2nd District Court of Appeals, which covers the conservative Milwaukee suburbs and the Fox Valley, rather than the 4th District, which covers liberal Dane County.

A 2011 change to state law required the appeal be heard outside the 4th District. Under that law, any action in which the sole defendant is the state of Wisconsin or certain state officers must be filed in an appeals court district other than the one that made the initial decision in the case.

Supporters of the change in the law said at the time that it would prevent cronyism by allowing appeals to be heard by judges from appeals courts outside the district where the case was originally heard, who would be more removed from the case. Parts of both affected legislative districts are located in the 2nd District.

Also Wednesday, a Senate committee held a public hearing on an amended bill that seeks to preempt the court case by prohibiting the governor from calling a special election after the spring election in an election year. This year’s spring election is on Tuesday; the Legislature plans to convene on Wednesday to pass the bill.

It’s unclear what steps the Senate will take now that Walker has said he will call the special elections. It’s also unclear if legislation can cancel a previously called election.

The issue involves vacancies in Assembly District 42, which includes the town of Dane, and Senate District 1, which covers the Door County peninsula. The vacancies were created in late December when Rep. Keith Ripp, R-Lodi, and Sen. Frank Lasee, R-De Pere, took jobs in Walker’s administration.

Fitzgerald testified Wednesday that anywhere from 85 to 150 overseas voters, including some in the military, could be disenfranchised if the special elections proceed under the timeline set by current state law. He noted there were no overseas ballots cast in the Senate District 10 special election in January, which was called 10 weeks in advance of that election.

“This is a real group that could be disenfranchised if this bill doesn’t pass,” Fitzgerald said.

Sen. Mark Miller, D-Monona, challenged Fitzgerald’s concern about military voters, noting the Senate had a chance to pass a bill that would make absentee voting easier for military voters but didn’t during the regular session.

“The concern for military voters did not seem to be high on your radar and you’re a former military man yourself,” Miller said. “The election could have been scheduled for the spring election and there would have been none of this confusion you’re talking about.”