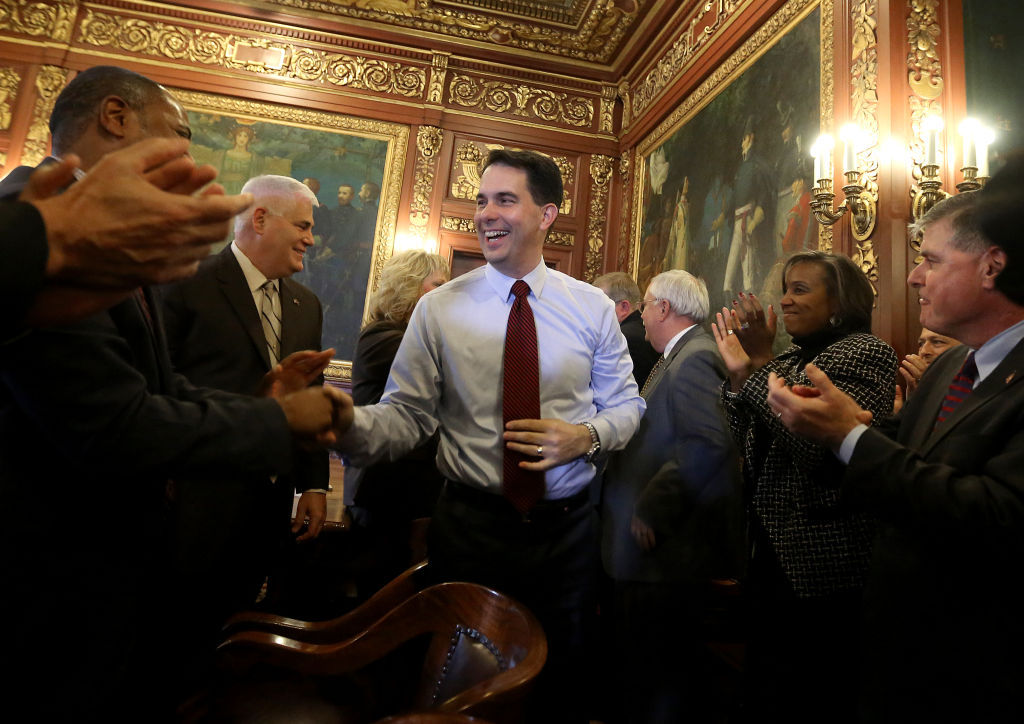 Gov. Scott Walker greets members of his staff and Cabinet in the state Capitol on Wednesday. He pledged an aggressive and swift agenda for the start of his second term. 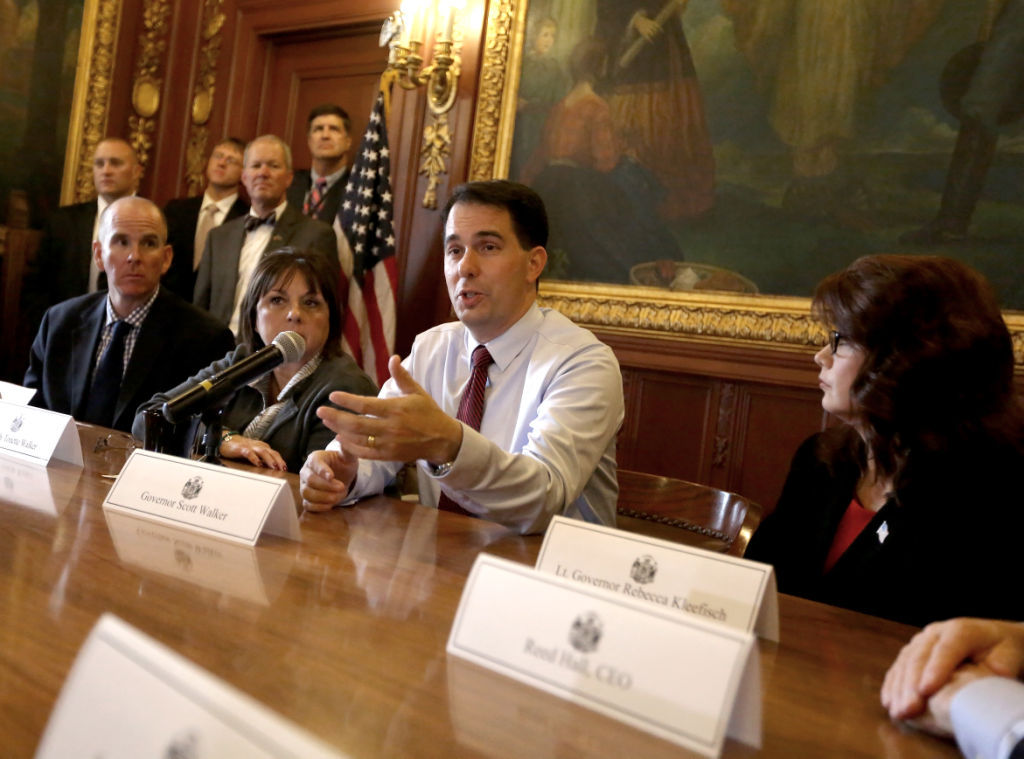 Gov. Scott Walker addresses members of his staff and cabinet Wednesday, the day after he was elected to a second term. With him at the table are his chief of staff Eric Schutt, his wife, Tonette Walker, and Lt. Gov. Rebecca Kleefisch. 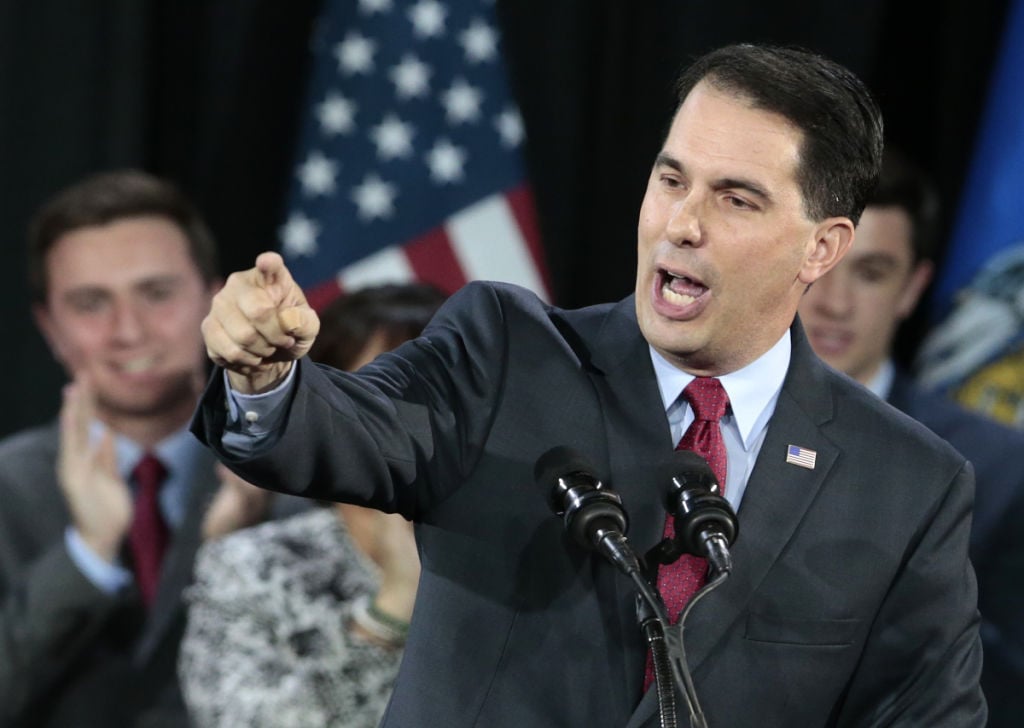 Wisconsin Gov. Scott Walker speaks during an Election Night event Tuesday at State Fair Park Exposition Center in West Allis. His victory has led to further speculation about him as a 2016 presidential contender

Emboldened by a decisive victory and expanded Republican majorities at the state Capitol, Gov. Scott Walker on Wednesday pushed for a new wave of conservative legislation and government overhauls as speculation heats up about him as a possible 2016 presidential contender.

“We’re going to be even more aggressive now,” Walker told members of his Cabinet on Wednesday at the Capitol. “Because I think we’ve got an even stronger ally in the Legislature.”

Moving quickly — and aggressively — on the budget and other issues next spring would position Walker to make a decision about a presidential run when other possible candidates are likely to be announcing their plans.

Walker was catapulted onto the national stage in 2011 when he pushed the Act 10 collective bargaining changes. He solidified his political — and conservative — credentials by becoming the only governor to survive a recall, in 2012.

Walker focused much of his victory speech on drawing distinctions between Wisconsin and Washington, D.C. He said that while people in Washington push a top-down approach, his administration believes in building the economy from the ground up.

Peppered with references to the American dream and freedom from government dependence, Walker’s speech also aimed at a national audience.

Assembly Speaker Robin Vos, R-Rochester, and Rep. John Nygren, R-Marinette, were almost giddy at a Wednesday morning press conference at the Capitol about Assembly Republicans’ agenda for the next session.

Vos said his priorities include continuing tax cuts, pushing for school accountability and expanding the state’s voucher program, overhauling the state Government Accountability Board, and changing how secret John Doe investigations are conducted in Wisconsin.

Walker has been embroiled in two John Doe investigations in recent years, the first targeting his aides and associates while he was Milwaukee County executive and the second targeting his campaign and conservative groups during the recalls. He has not been charged in either investigation, and Republicans argue that the probes were politically motivated.

Senate Majority Leader Scott Fitzgerald, R-Juneau, said he plans to get feedback from his new caucus before laying out a Senate Republican agenda.

Still, lawmakers are facing a $1.8 billion deficit for the 2015-16 budget, a figure that could change before January. Walker said in a video message Wednesday he has already begun working on his proposal.

Vos said Walker has never spoken to him about running for president, but said he can’t blame people for seeing Walker as a possible 2016 GOP presidential contender.

Fitzgerald said, “It’s no surprise to me that his name keeps coming up.”

Michael Wagner, assistant professor at UW-Madison’s School of Journalism and Mass Communication, said the governor’s victory Tuesday was crucial for his political career, as he can now say he’s won three elections in a swing state that has backed Democrats in recent presidential races.

“I think this goes a long way towards cementing his legacy as a successful Wisconsin politician,” Wagner said. “He now has a good story he can tell to party activists and donors.”

Wagner added, “I think he would be someone that would have to be taken seriously, and wouldn’t be viewed as a fringe candidate.”

Wagner said he didn’t think Walker would need to work too hard to court conservatives or “overtly try to make another splash to remind them of his conservative bona fides.”

“It’s remarkable how stable his coalition has been,” he said.

Peverill Squire, professor of political science at University of Missouri and an expert on the Iowa caucuses, agreed that Walker has the political biography to consider a presidential bid, but added it will be a crowded field.

Squire said he thinks Walker would need to continue pushing a conservative agenda to introduce himself to rank-and-file Republicans.

“I think 2011 will probably continue to recede from view,” Squire said, referencing Act 10 and the reduction in union power in Wisconsin. “I think rank-and-file Republicans have some idea who he is, but there’s a lot that needs to be filled in nationally.”

Squire said Walker is better positioned for a presidential run than fellow Republican U.S. Rep. Paul Ryan, R-Janesville, saying the governor can run as not being part of the Washington, D.C., political establishment.

“That’s the opportunity that elected officials outside of D.C. enjoy,” he said.

Walker and Ryan are friends — and campaigned together frequently in the final days of Walker’s re-election bid. Walker has essentially said he wouldn’t run if Ryan got in the race.

“I just hope that regardless, that we’re a less polarized state,” Barca said. “Obviously, it’s been very unhealthy for this state.”

Sen. Scott Fitzgerald, R-Juneau, also expects reform of the state's elections agency, which he said will be controversial.

Heavy losses in Tuesday's election, part of a national Republican sweep, have left many Democrats frustrated.

Walker tells Politico "there's going to be a hunger for a leader who can actually get things done."

Wisconsin Right to Work is pushing for a law that says private-sector workers can't be required to join a union.

The governor said changes are being considered to six or seven different agencies, but did not offer specifics.

Ahead of a new legislative session beginning in January, Republican lawmakers have revived a call to repeal the standards that were adopted in 2010, but are backing off of calling for a full repeal.

The decision by the 2012 GOP vice presidential nominee clears a path for Gov. Scott Walker.

Ryan will join Walker at several stops today and until the Nov. 4 election.

Gov. Scott Walker won a second term as governor on Tuesday. He gave his victory speech at the State Fair Park Exposition Center in West Allis.

Supporters of Democrat Mary Burke rallied in support of their candidate at the Overture Center in Madison on Election Night.

Mary Burke, Democratic candidate for Wisconsin governor, concedes the election to Scott Walker before a crowd of supporters Tuesday night at t…

Wisconsin election officials predict Tuesday's election will draw 56.5 percent of eligible voters to the polls. How does that compare to other…

See the margin of victory for Republican Gov. Scott Walker or Democratic challenger Mary Burke in each Wisconsin county.

See the percentage of eligible voters in each county who participated in the 2014 election for governor.

See live results from all the races we're tracking.

Gov. Scott Walker greets members of his staff and Cabinet in the state Capitol on Wednesday. He pledged an aggressive and swift agenda for the start of his second term.

Gov. Scott Walker addresses members of his staff and cabinet Wednesday, the day after he was elected to a second term. With him at the table are his chief of staff Eric Schutt, his wife, Tonette Walker, and Lt. Gov. Rebecca Kleefisch.

Wisconsin Gov. Scott Walker speaks during an Election Night event Tuesday at State Fair Park Exposition Center in West Allis. His victory has led to further speculation about him as a 2016 presidential contender