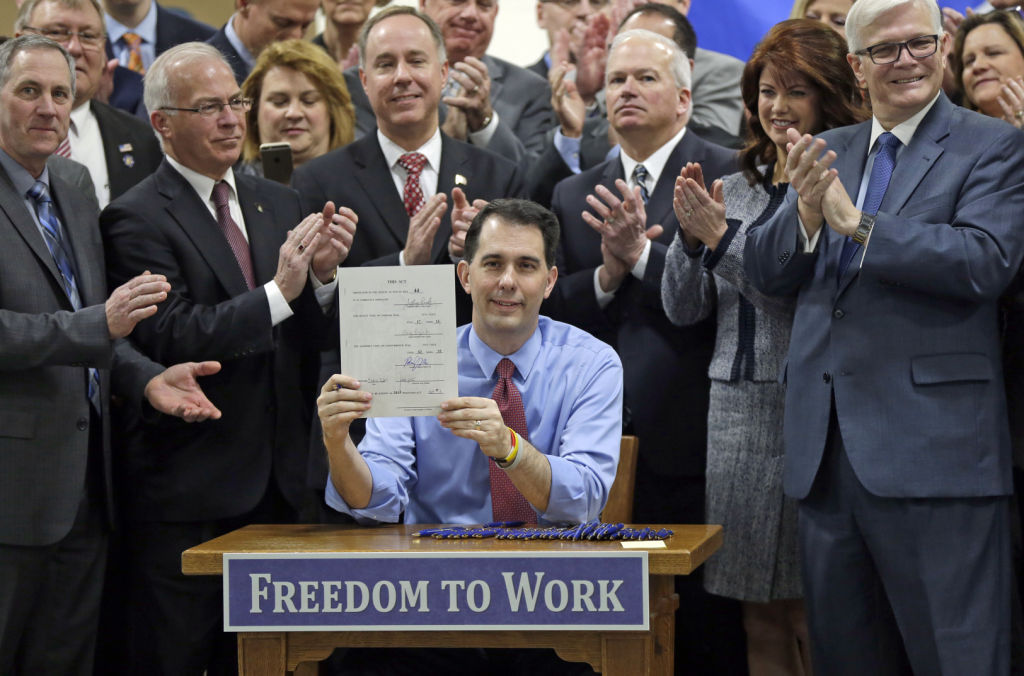 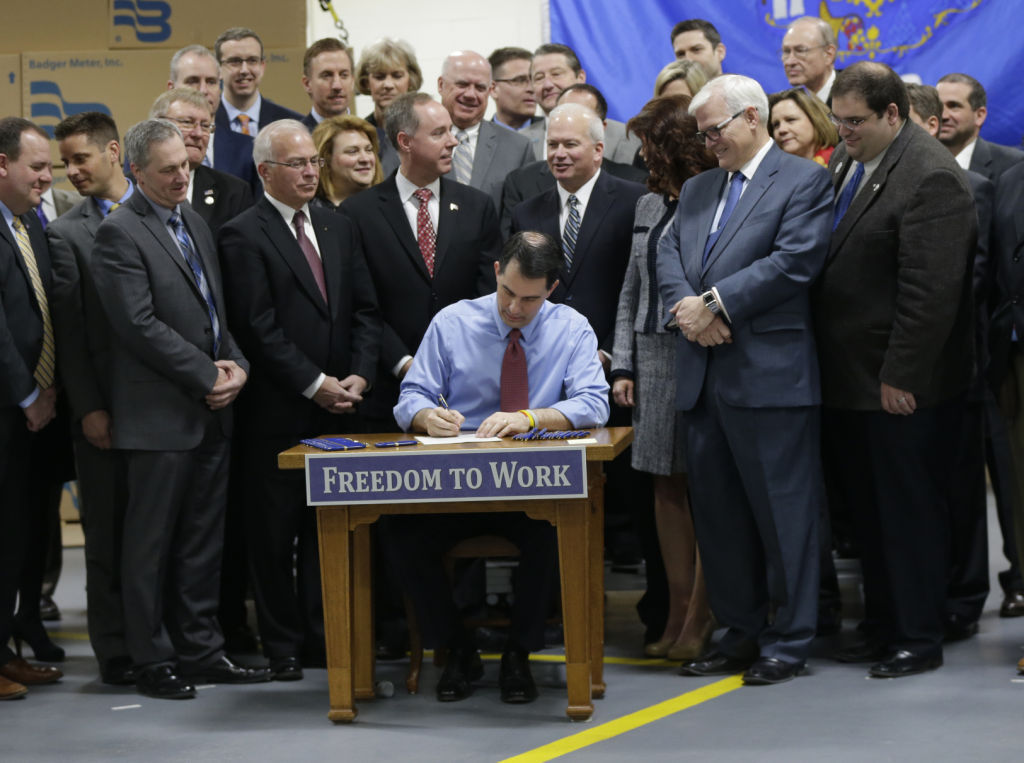 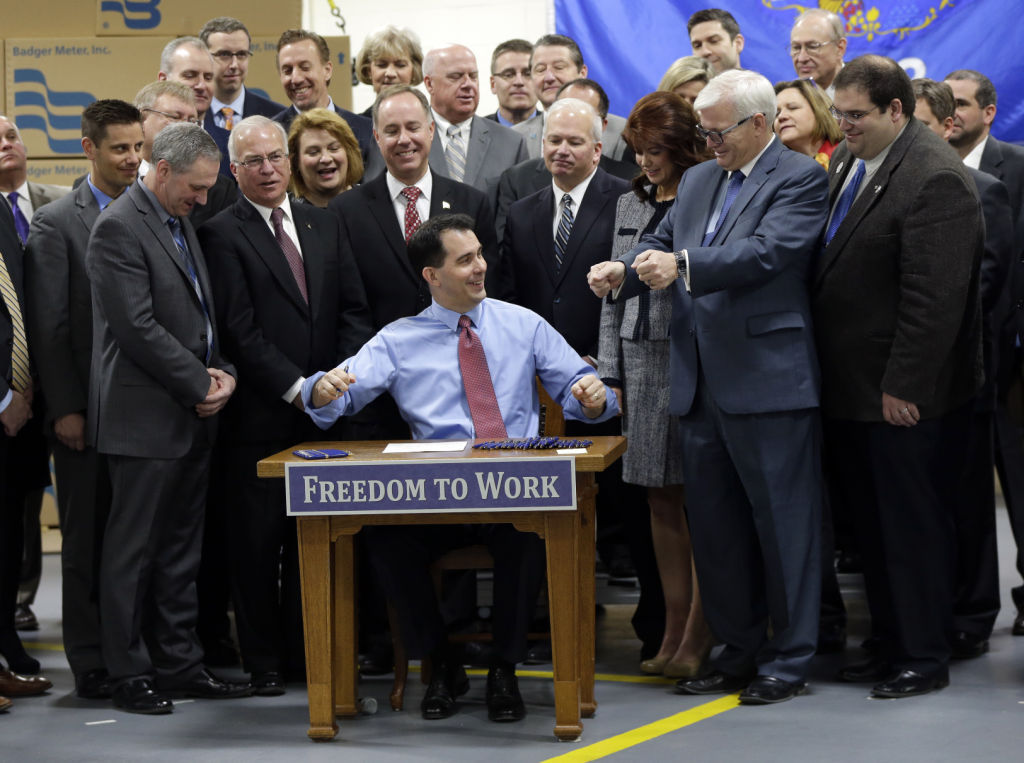 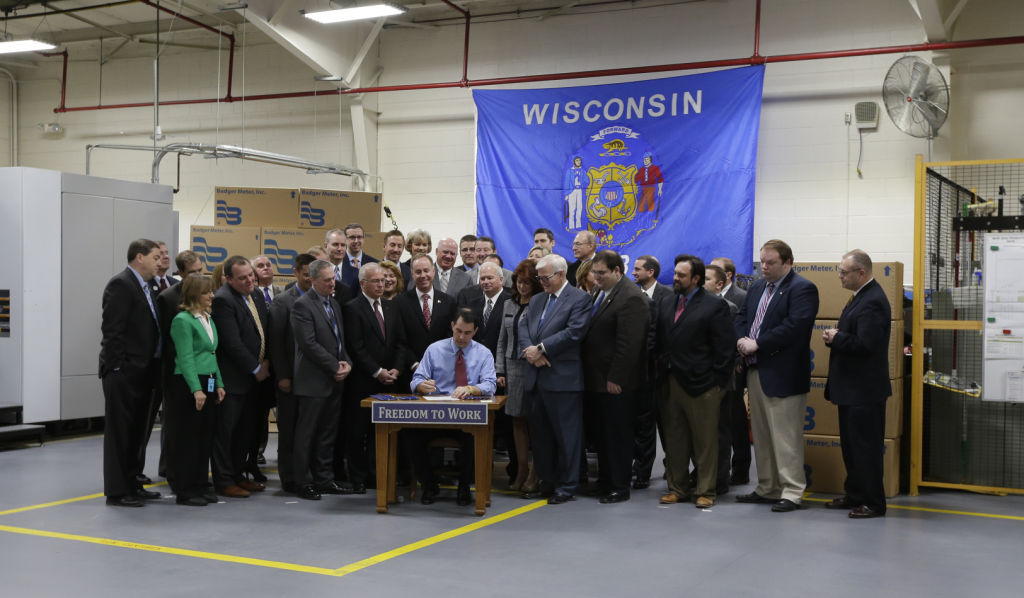 BROWN DEER — Gov. Scott Walker on Monday signed the contentious right-to-work bill at a factory in Brown Deer, making Wisconsin the 25th state with such a law.

The state once had a reputation as a strong supporter of union rights. But Walker first curtailed collective bargaining with Act 10 in 2011 and now adds Wisconsin to the list of Midwestern manufacturing hubs like Michigan and Indiana that has backed right-to-work.

He was joined by top legislative leaders, including Assembly Speaker Robin Vos, R-Rochester, and Senate Majority Leader Scott Fitzgerald, R-Juneau, whom Walker credited with shepherding the bill through the Legislature in just two weeks.

The fast-tracked measure drew thousands of protesters to the state Capitol and was universally opposed by unions and some companies but backed by Wisconsin Manufacturers & Commerce, the state’s largest business lobby.

Walker said he wanted to hold the signing ceremony at Badger Meter Inc. in northern Milwaukee County to illustrate “why freedom to work is so important.”

The governor said right-to-work is among the “top three or four” factors that site selectors ask about in deciding where to relocate. Walker said it’s an additional “tool” to help businesses create jobs, along with the state’s manufacturing production tax credit, worker training programs and other strategies.

Passing right-to-work “sends a powerful message around the country and around the world” that “Wisconsin is the right place because Wisconsin (is) yet again showing we are open for business,” Walker said.

Walker, who is laying the groundwork for a 2016 presidential bid, declined to take questions from reporters after the bill signing.

President Barack Obama took the unusual step of issuing a statement on the state legislation.

“I’m deeply disappointed that a new anti-worker law in Wisconsin will weaken, rather than strengthen workers in the new economy. Wisconsin is a state built by labor, with a proud pro-worker past,” Obama said. “So even as its governor claims victory over working Americans, I’d encourage him to try and score a victory for working Americans – by taking meaningful action to raise their wages and offer them the security of paid leave.”

Rich Meeusen, president and CEO of Badger Meter Inc., was a vocal supporter of the measure, which allows workers to opt out of financially supporting private-sector labor unions.

Meeusen also is big backer of Republican candidates, donating about $76,000 over the past 10 years to Walker and other GOP candidates, according to the Wisconsin Democracy Campaign database.

Meeusen told the crowd that because of the law, known as Act 1, he will be expanding in Brown Deer rather than moving jobs to Nogales, Mexico, where the company has a plant. He pointed to an open space that he said will house $2.5 million in equipment and 12 more jobs, and lead to 30 to 50 more jobs later on.

“The equipment is now scheduled to arrive this summer, here in Wisconsin, not in Nogales,” Meeusen said.

Meeusen said the Brown Deer plant is the only unionized workplace among Badger Meter’s eight production facilities. While the number of Badger Meter workers is up 40 percent over the past decade, “we have not added any production jobs in this facility. But now we have the opportunity to reverse that trend.”

“And contrary to the hyperbole around this legislation,” Meeusen added, “there will be no reduction in pay or benefits for our union or nonunion employees.”

Republicans have described the bill as offering workers freedom to choose whether to financially support their union.

Opponents cite studies showing that wages for all workers in right-to-work states tend to be lower than those without such a law.

“Gov. Walker has shown a true disregard for Wisconsin families,” according to a statement from the United Food and Commercial Workers Union Local 1473. “(Right-to-work) does nothing to create jobs, attract businesses, or grow the economy. In fact, when it comes to overall quality of life, right-to-work states rank among the worst.”

Asked why few if any of his employees were at the signing ceremony, Meeusen said, “This is a Monday. It’s a work day. And most of them are working. I didn’t shut down the whole plant to bring them over here.”

But two employees taking a break outside the building said workers had been told not to attend the ceremony to avoid “embarrassing” the company. They asked not to be identified for fear of retribution.

Meeusen acknowledged that just a “handful” of the plant’s 120 unionized employees had opted out of joining the International Association of Aerospace Workers. Those employees now pay a “fair share” amount to the union to cover the cost of representation but don’t pay for union political activity; under the new law, they won’t even have to pay that amount.

“I have no desire to weaken the union,” he said after the ceremony. “I have the desire to give my workers a choice.”

Two Brown Deer residents, Vivian and Keith Nienow, came to the ceremony to support right-to-work. They said they were union members in the past and objected to the use of their dues for political candidates and causes they didn’t support.

Vivian Nienow said when she was a part-time employee at a grocery store “a good percentage” of her check went for union dues.

“While we were both union members, we were living in subsidized housing,” Nienow said. “It wasn’t like being a union member was a road to riches for us.”

Nienow said she hopes enacting the law will help encourage job growth in Wisconsin. The pair were invited to the ceremony by their state representative, Dan Knodl, R-Germantown.

Mike Browne, deputy director of the liberal advocacy group One Wisconsin Now, said Badger Meter was a good location for the bill signing.

“How fitting that Gov. Walker chose to sign the bill at the business of a millionaire campaign contributor who threatened to send the jobs of hard-working skilled Wisconsin workers to another country unless the system was tilted further in his favor,” Browne said.

Tap on any state for additional details about when the state adopted its right-to-work law.

Freedom to Work from Governor Scott Walker on Vimeo.

The lawsuit is the first to be filed since Gov. Scott Walker signed the right-to-work law on Monday.

The changes could lead to lower costs for public construction projects — and lower wages for the people who work on them.

On March 9, 2015, Wisconsin became the 25th state in the U.S. to enact a so-called right-to-work law, which prevents private-sector unions fro…

Gov. Scott Walker's office released this video of Walker signing the right-to-work bill into law at a company near Milwaukee on Monday.

The key questions about Wisconsin's apprenticeship program are who's paying, how much and for what?