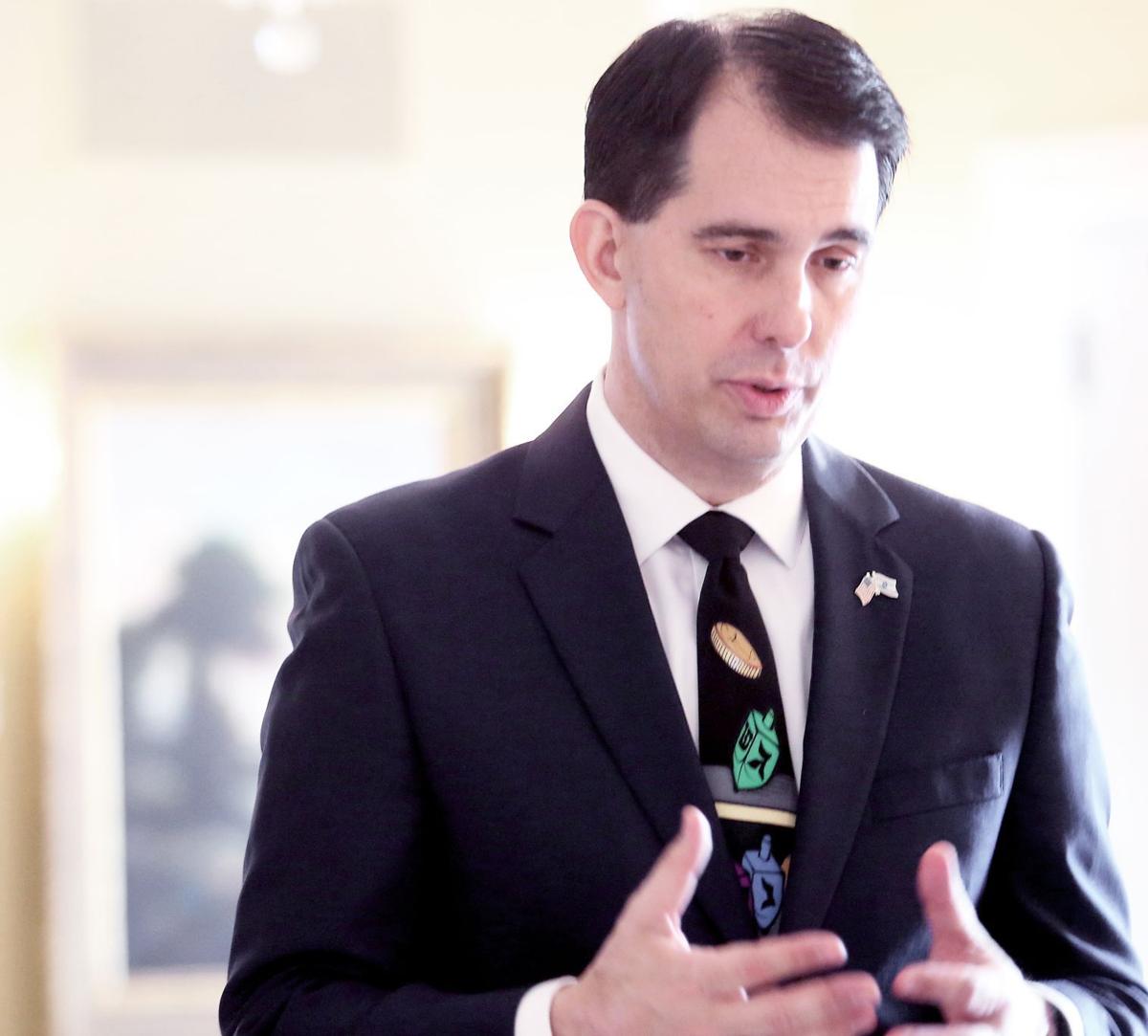 Gov. Scott Walker, pictured at a Menorah lighting ceremony last week at the Executive Residence, sees a bright future ahead in Wisconsin as he contemplates a potential third term in 2018. 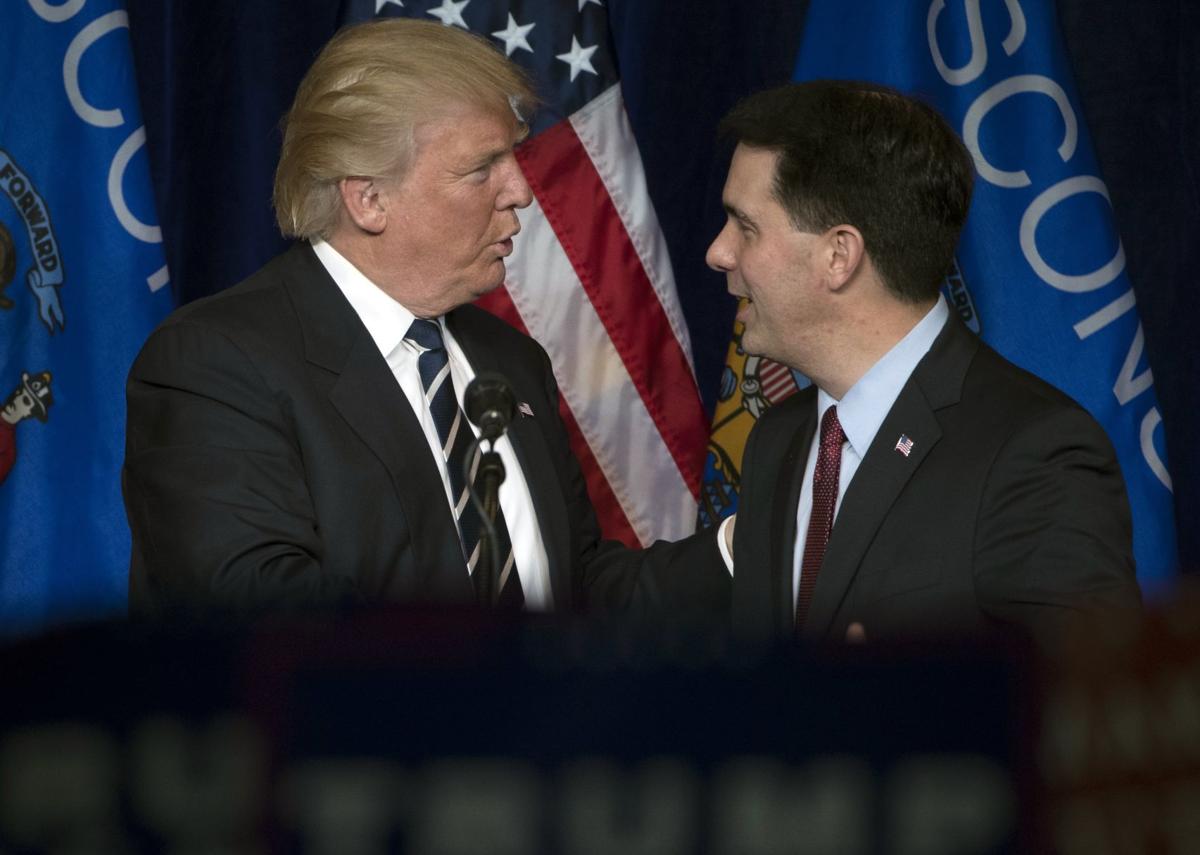 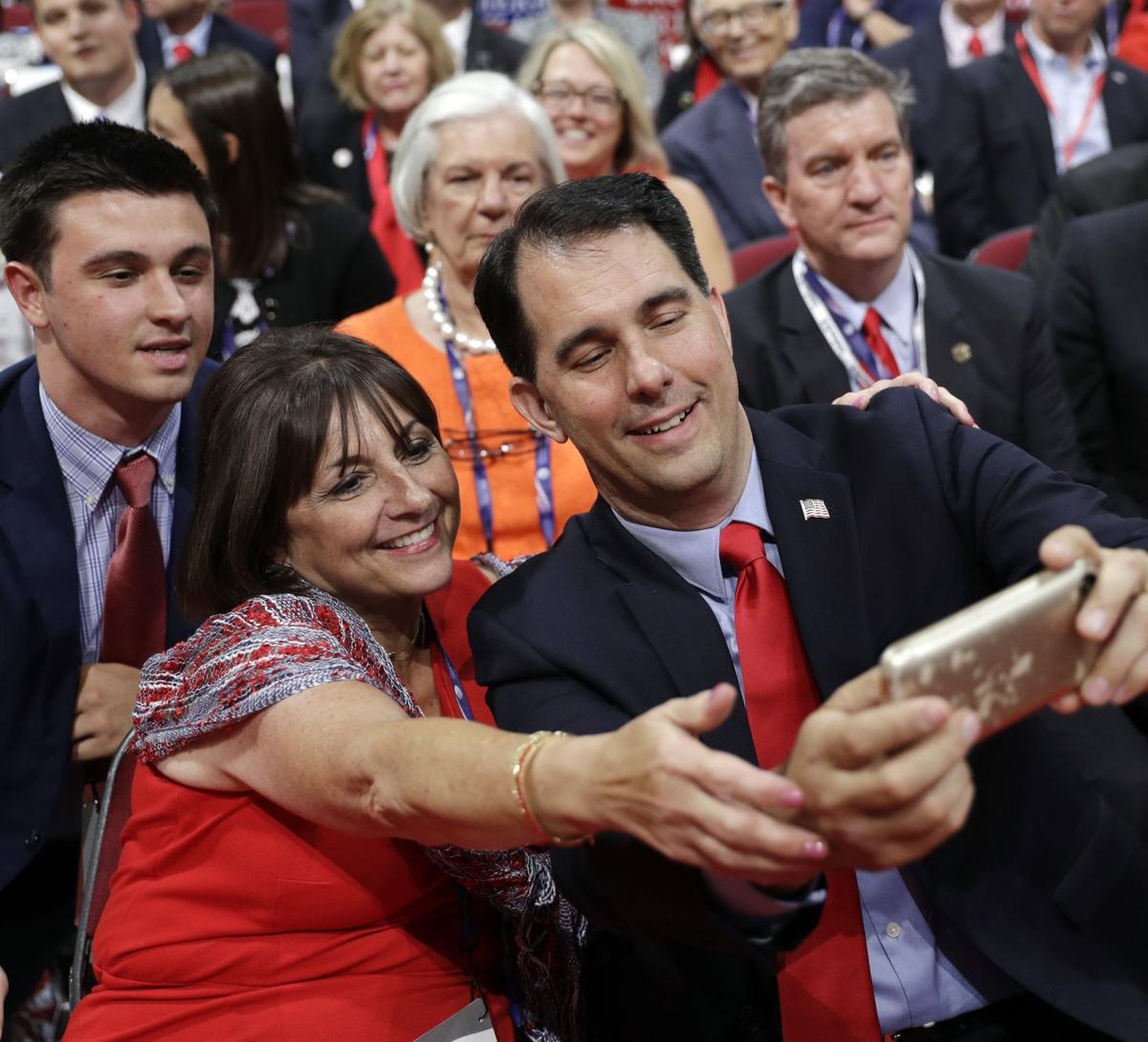 Gov. Scott Walker takes selfie with his wife Tonette and son Alex, left, during the Republican National Convention in Cleveland. Walker was one of the featured speakers at the event. 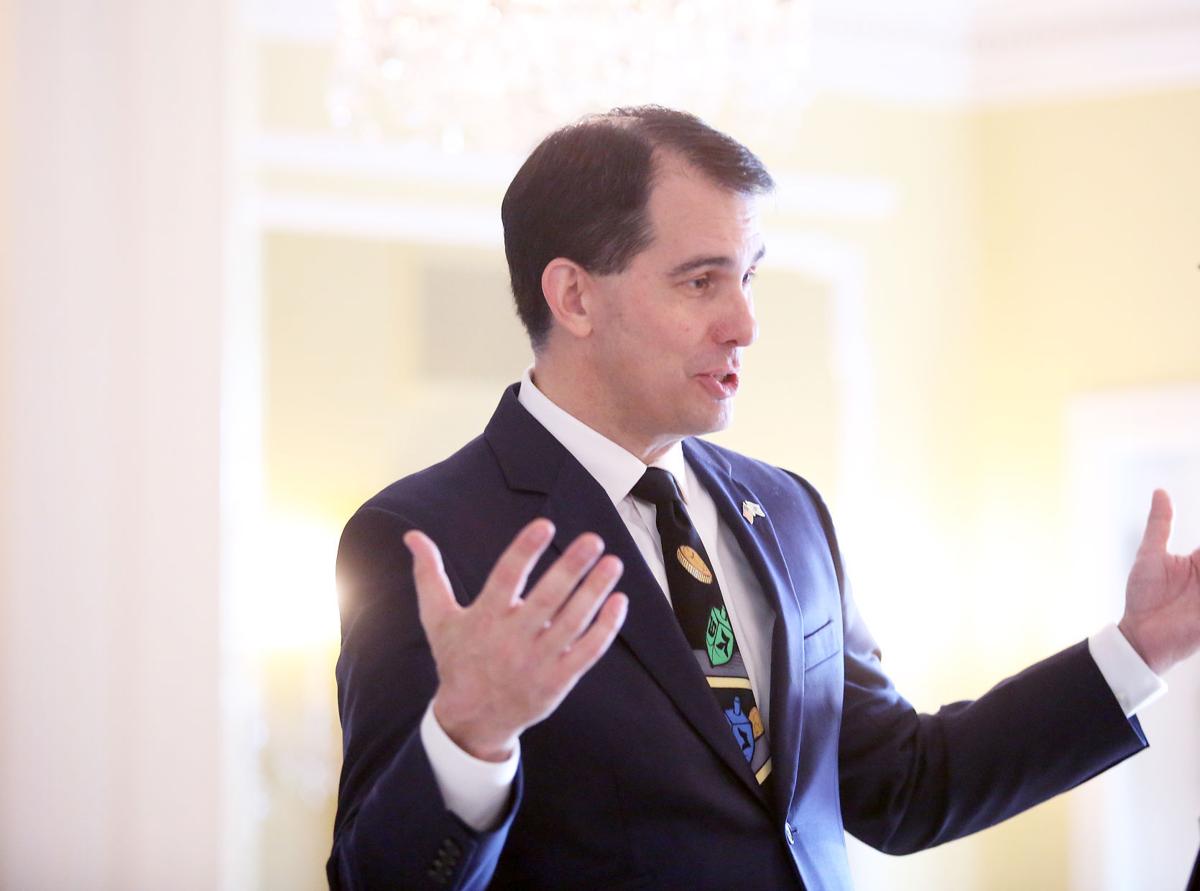 At a recent state economic summit, Gov. Scott Walker slipped on a pair of sunglasses and quoted the 1980s tune “The Future’s So Bright, I Gotta Wear Shades.”

“You think about the future of this state, it really is exciting — not just where we’re at now, but where we’re headed,” Walker said as the audience chuckled.

Notwithstanding the song being an irony-laced ditty about a grim nuclear future, Walker was turning the page on an overcast two years in which his job approval rating and presidential election ambitions fizzled.

He also was pivoting from an election in which his party’s nominee cast the slow-growth national economy as a disaster, to one in which Walker, should he run for a third term in 2018, will be defending a state economy that has lagged the national recovery as a success.

In a recent interview with the Wisconsin State Journal, Walker dismissed the notion that he might be vulnerable in 2018.

“The fact of the matter is if I chose to run again, I wouldn’t just run on our record, I’d have to lay out an agenda for the future,” Walker said. “Elections are about the future, not about the past.”

Wisconsin Democrats face their own problems after a disastrous 2016 election in which they lost two seats in the Legislature and a U.S. Senate race they were favored to win. President-elect Donald Trump won 545 of the 809 Wisconsin cities, villages and towns President Barack Obama won in 2012 on his way to becoming the first Republican to win Wisconsin since before Timbuk3 had a hit record.

But the handful of Democrats considering a gubernatorial run see several problems piling up in state government that they blame on Walker. They include the state ranking 33rd in job creation and last in new business startups, a strained transportation budget that Walker has delayed fixing with increased borrowing, deferred debt payments needed to balance the state budget and sagging research dollars at UW-Madison.

Dane County Executive Joe Parisi, who hasn’t ruled out a gubernatorial run but faces re-election next spring, said Walker is vulnerable because he will have been governor for eight years with a Republican Legislature and hasn’t done much to improve state infrastructure or raise prosperity.

“Are you better off today than you were eight years ago? Are your roads better? Are your wages higher? Do you believe your kids have a better shot than you did?” Parisi said. “We’re going to hear a resounding ‘no’ from the (Democratic) candidates.”

Walker points to the state’s 4.1 percent unemployment rate — the lowest since January 2001 — and record-high employment levels as positive signs. He has shifted gears from his 2010 pledge to create 250,000 jobs in his first term, a mark the state still hasn’t hit, to a new focus on workforce training.

“What people care about is their own lives,” Walker said. “And when I talk to people all across the state, wages are up, jobs are up. The No. 1 issue I hear almost at all these listening sessions is people saying, small business owners saying, ‘I don’t have enough people to fill these jobs.’”

Walker also dismisses his low job approval numbers, which bottomed out at 37 percent in September 2015, just before he ended his 71-day presidential election, the third shortest since 1972.

The nadir came after he spent months campaigning in other states during a tough budget cycle, and he has since spent the last year touring every county and holding dozens of private meetings with local officials, business leaders and citizens.

The Marquette Law School Poll last clocked his approval at 42 percent just before the November election, but Walker notes it was that low before during the protests over his signature Act 10 law that curtailed the power of public sector unions in the state.

“Part of my appeal in previous elections is even for those who aren’t Republican or lean Republican, they like someone who tells people what they’re going to do, is bold about it, and is willing to take bold actions,” Walker said.

He still says the biggest mistake he made over the past six years was acting too quickly to implement Act 10, and not explaining it more clearly to the public — though he also acknowledges it was a mistake to run for president while trying to govern, pointing out that he was on the phone five or six times a day with his chief of staff while hopscotching between Iowa, New Hampshire and South Carolina.

“My detractors would say, ‘Aha! You weren’t being a good governor,’” Walker said. “I would say the opposite. I don’t think I was as effective a candidate as I could have been.”

As of the end of November, Walker still had about $150,000 in presidential campaign debt, according to his monthly filing with the Federal Election Commission.

Jim Villa, a Walker political adviser, said he expects the governor will have his campaign debt paid off in early 2017. He has also begun ramping up his state campaign fundraising effort, which Villa said is a strong indicator Walker will run again in 2018.

“You don’t have a candidate who revs up their fundraising to the extent that he has and isn’t serious about running for re-election,” Villa said.

As of the latest filing, Walker had about $142,000 cash on hand at the end of August. Sachin Chheda, a Democratic strategist from Milwaukee, said Republicans like Walker no longer need a large war chest to scare away potential competitors because they can rely on wealthy donors writing seven-figure checks to so-called issue advocacy groups to run beneficial ads during a campaign.

“He doesn’t have to raise any money to have the money he needs to win the election,” Chheda said.

Some Democrats are skeptical Walker will run again, saying he is continuing to raise money because to do otherwise or to announce he isn’t running would weaken his ability to control the 2017-19 state budget.

“He’s really trying to figure out how he can get out before it all crumbles around him,” Democratic National Committee member Jason Rae said. “He wants to get out without raising taxes. He’s in active warfare with Republican leadership. … He can see the writing on the wall that his prospects in Wisconsin are limited.”

Republican strategist Mark Graul disagrees that Walker will be vulnerable in 2018. He will still be able to tout turning a budget deficit into a surplus and a state budget that has cut income taxes, held average property taxes steady and frozen university tuition.

“Certainly a tough economy makes it tougher for an incumbent to win,” Graul said. “I don’t see Gov. Walker having one thing like that dissuading him from running again.”

Walker also isn’t facing as challenging of a state budget as the previous one, which included a $250 million cut to the UW System and no increase in spending authority for K-12 schools. Walker has pledged to increase funding for both.

He will also continue to have a high national profile as chairman of the Republican Governors Association. He plans to use that position to urge the Trump administration to return more control over federal funding to the states.

Brian Westrate, a Republican official from Eau Claire County, said Walker is still popular among conservatives in the state. Walker’s fortunes could turn on what happens with a new president in the White House.

“The challenge is going to be transitioning Trump voters into Republican voters,” Westrate said. “If we can do that, our prospects are good.”

Asked about defending his record if he decides to run for a third term, Gov. Scott Walker stated elections are about looking forward.

Follow the State Journal's ongoing coverage as the search for a Democratic challenger to Republican Gov. Scott Walker heats up ahead of the 20…

The governor shared some details of his 2017-19 budget proposal in a 20-minute interview with the State Journal.

Scott Walker says he won't announce 2018 decision until after budget

Democrats wants to reconnect with rural voters after Donald Trump won 86 percent of the state's municipalities.

The governor settled about $41,000 in debt and raised several hundred thousand dollars leasing an email list.

He shared his thoughts with Vice President Mike Pence.

As unemployment approaches 3 percent, Gov. Scott Walker has focused on the statistic as a reason to celebrate.

Gov. Scott Walker, pictured at a Menorah lighting ceremony last week at the Executive Residence, sees a bright future ahead in Wisconsin as he contemplates a potential third term in 2018.

Gov. Scott Walker takes selfie with his wife Tonette and son Alex, left, during the Republican National Convention in Cleveland. Walker was one of the featured speakers at the event.