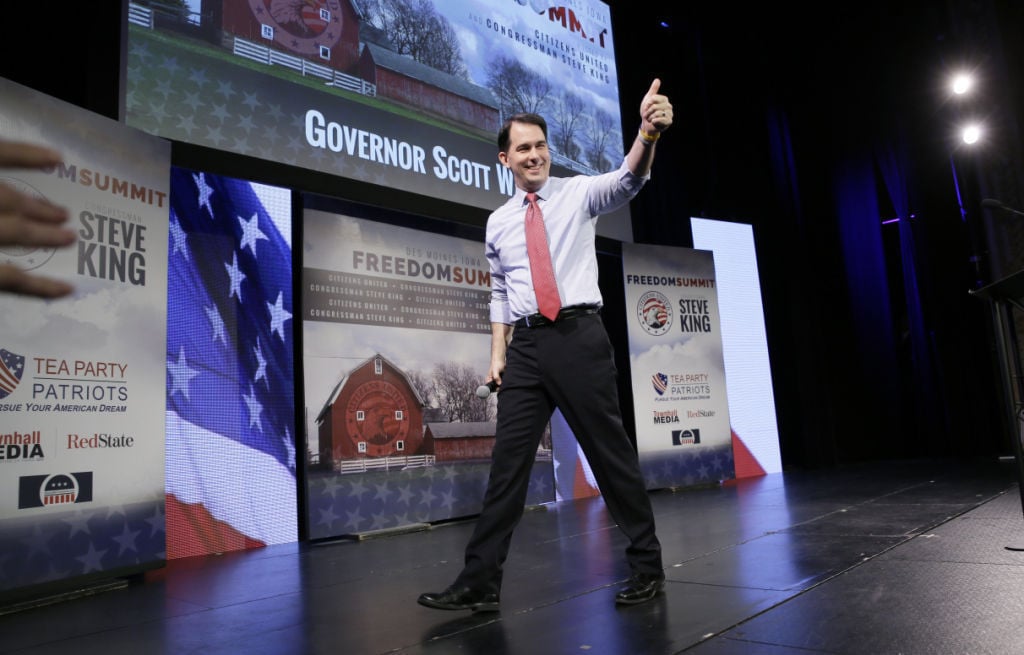 Gov. Scott Walker leaves the stage after a rousing Iowa campaign speech in January 2015. Walker explored and then launched a short-lived presidential campaign shortly after winning re-election in 2014. 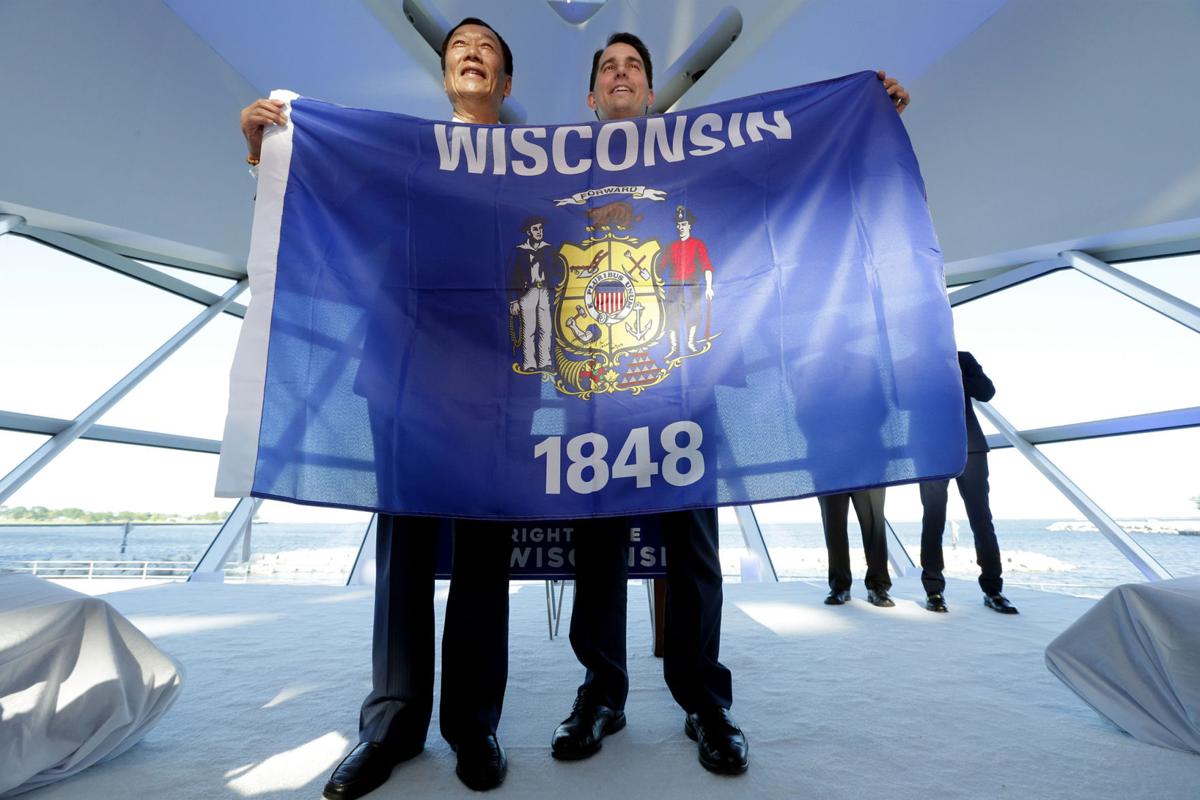 Gov. Scott Walker and Foxconn CEO Terry Gou announce on July 29 the company plans to locate its new LCD-screen factory in Wisconsin. One supporters called the deal a "grand slam" but a critic says it's a "Hail Mary."

In the first act, after winning re-election by the same six-point margin as in 2010, his job approval rating in the Marquette Law School Poll plummeted as he focused on an ill-fated presidential run while passing a budget that cut University of Wisconsin System funding by $250 million.

In the second act, his job approval rating rebounded as he refocused on traveling the state and passed a budget with record spending and K-12 funding levels.

"Coming back to Wisconsin after the presidential election was almost a near-death experience," said UW-Milwaukee political science professor Mordecai Lee. "Day after day, issue after issue he’s clawed his way back into political viability."

Next Sunday, Walker begins a third act as he launches a re-election campaign in which he faces a growing list of Democratic challengers. And there is some recent evidence public opinion of Walker is sliding backward — an NBC News/Marist poll in August found just 40 percent of voters had a favorable view of Walker and a Democratic-leaning Public Policy Polling survey last week found only 43 percent approved of his job performance.

"As I look at his second term, I think Wisconsin families are questioning whose side he's on and if they can trust him," said Senate Minority Leader Jennifer Shilling, D-La Crosse. "The idea that he had a short, failed run for president, I think he lost a lot of credibility in this state."

Walker declined an interview request for this story.

Walker's campaign manager Joe Fadness said in a statement that "tired attacks from desperate Democrats will continue to fall flat because voters know that our economy is strong, schools are better off and Wisconsin's outlook is bright under Walker's leadership."

Walker's second term has been pockmarked by controversies: an ongoing FBI investigation into alleged abuse at the state's youth prison, revelations about millions of taxpayer dollars lost at his flagship job-creation agency, and declining quality at the state's veterans homes.

In 2015 the Wisconsin Supreme Court tossed out a John Doe investigation into Walker's recall campaign and the U.S. Supreme Court declined to hear an appeal. Those positive developments for Walker were muddied when leaked documents from the investigation detailed how Walker raised millions of undisclosed dollars for a group that acted as a recall campaign hub. The Legislature has since updated the law to permit that.

But Walker can also claim several victories: Wisconsin's unemployment rate has approached an all-time low, the state's bond rating improved due to what one ratings agency described as "conservatively managed budgets," and the state has landed two major manufacturers in German candymaker Haribo and Taiwanese electronics giant Foxconn.

In some ways Foxconn, with the potential to create 13,000 jobs and transform the state's economy, is the culmination of Walker's seven years in office. Or, as Republican strategist Brandon Scholz called it: "A grand slam, walk-off home run."

Walker ran in 2010 on a platform to create 250,000 jobs in his first term, a mark the state still hasn't reached. He all but eliminated corporate taxes for manufacturers, curbed the state's environmental regulations and made it harder for labor unions to organize by passing a right-to-work law.

But Democrats are pointing to Foxconn as a potential liability for Walker, particularly with the $3 billion price tag that will be paid for with existing tax dollars that could otherwise go to repairing roads, improving schools or lowering taxes. Democratic strategist Joe Zepecki called the deal a "Hail Mary pass."

"The amount of risk in this deal is off the charts," Zepecki said. "That is problematic at a time when Wisconsinites look at schools and look at roads and feel that they’re worse or the same and they’re not getting any better."

A Marquette poll last week found 54 percent of Milwaukee-area residents think Foxconn will improve the economy, compared with 37 percent who say it won't. Meanwhile 48 percent say the $3 billion price tag is more than what the plant is worth, compared with 38 percent who say it's worth it. The poll was conducted Oct. 9-17 with 1,200 adults and a margin of error of +/-3.5 percentage points.

Poll director Charles Franklin noted the views on Foxconn tracked closely along partisan lines in Democratic Milwaukee and Racine, where the factory will be located, and their Republican suburbs, so it's possible statewide results will be similar. But because the survey was conducted in the area most likely to benefit, the survey could reflect the high-water mark for support.

"Foxconn may not be the big win the governor seems to think it will be for him politically," Franklin said.

The Public Policy Polling survey found statewide 41 percent opposed the Foxconn deal, 34 percent supported it and 26 percent weren't sure. The poll was conducted Oct. 17 and 18 among 1,116 registered voters by phone and online with a margin of error of +/-2.9 percentage points. The Marist/NBC News poll from August on Walker's favorable ratings included 801 registered voters with a +/-3.5 percentage point margin of error.

Walker has fulfilled many of his campaign promises from 2014, such as more funding for workforce training and college scholarship grants, frozen UW tuition and keeping property taxes on a median home in 2018 lower than they were in 2010.

But he has also fallen short of his promises in some areas. He pledged to freeze technical college tuition and cut income taxes in his second term after cutting them in his first term, but the Legislature removed both proposals from his most recent budget.

Wisconsin businesses are split on the transportation issue with no consensus on raising fees or the gas tax, which Walker adamantly opposes, said Kurt Bauer, president of Wisconsin Manufacturers & Commerce, the state's largest business group.

"What businesses really like about Gov. Walker is he approaches things the way they are often forced to in their business," Bauer said. "They’re not dissatisfied with what he’s doing, but roads will probably have to be addressed in the next budget."

Scot Ross, executive director of liberal group One Wisconsin Now, said Walker's approach to cutting taxes for businesses and the wealthy while eliminating worker protections such as the prevailing wage for highway contractors are reasons why the state has seen one of the largest declines in the middle class and by one measure ranks last in start-up activity.

"Scott Walker is going to have an ongoing challenge in that Wisconsin remains so divided in two," Ross said.

Walker can still point to the fact that he has already won three statewide elections -- handily.

Ultimately Walker's second term performance might not matter as much to voters weighing whether to give him a third term as the national political climate a year from now, when feelings about Republican President Donald Trump or the economy could seep into local elections.

Other national or state issues could also have an impact. And whoever emerges from the ensemble to play the Democrats' leading role as challenger could also shape the debate, said UW-Madison political science professor Barry Burden.

"What Walker’s strengths and weaknesses are will depend on who the alternative is," Burden said.

New Marquette poll: Scott Walker job approval back to even

The Marquette Law School Poll also asked about withdrawal from the Paris climate accord and NATO support.

Walker is expected to announce a run for a third term

Scott Walker: 'We're ready to move forward because there's more to be done'

Walker's re-election campaign and the Wisconsin Republican Party are spreading the word through online advertising and billboards.

Gov. Scott Walker leaves the stage after a rousing Iowa campaign speech in January 2015. Walker explored and then launched a short-lived presidential campaign shortly after winning re-election in 2014.

Gov. Scott Walker and Foxconn CEO Terry Gou announce on July 29 the company plans to locate its new LCD-screen factory in Wisconsin. One supporters called the deal a "grand slam" but a critic says it's a "Hail Mary." 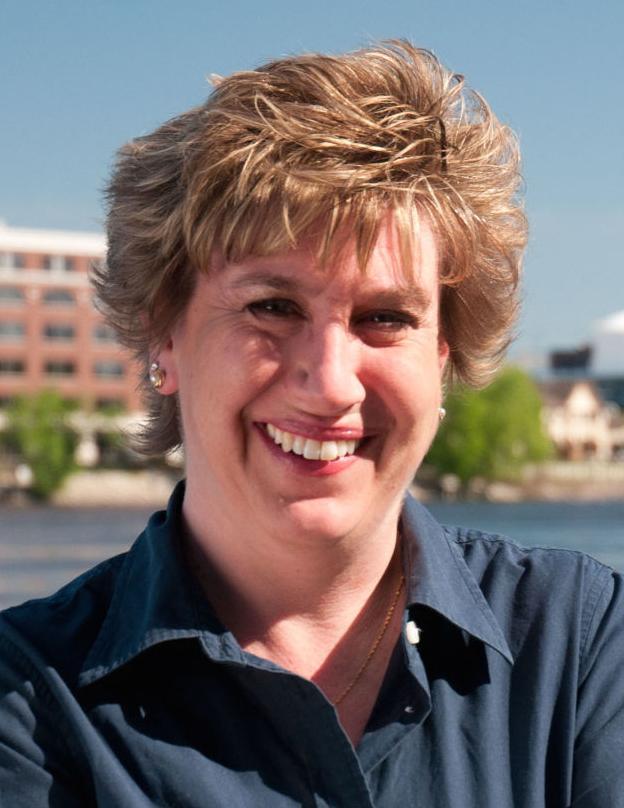 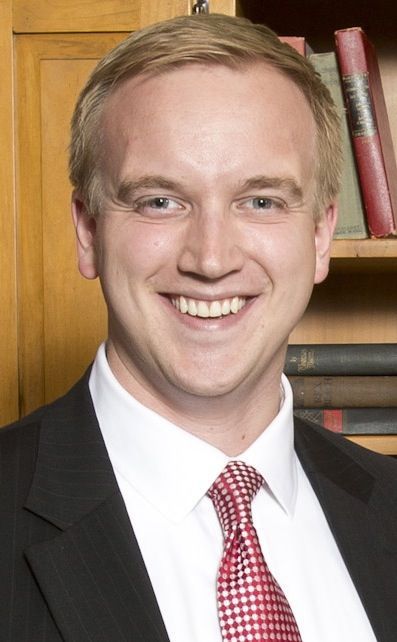 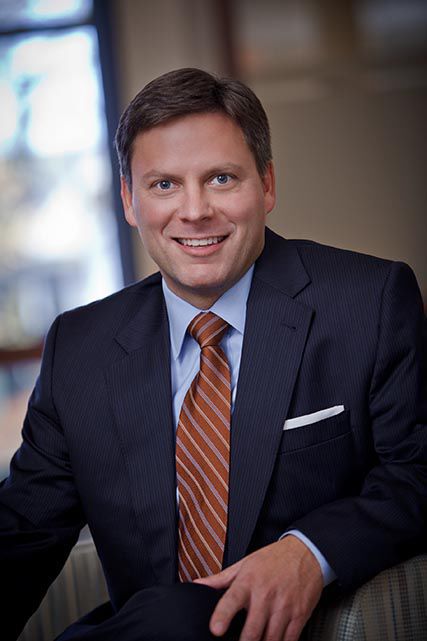