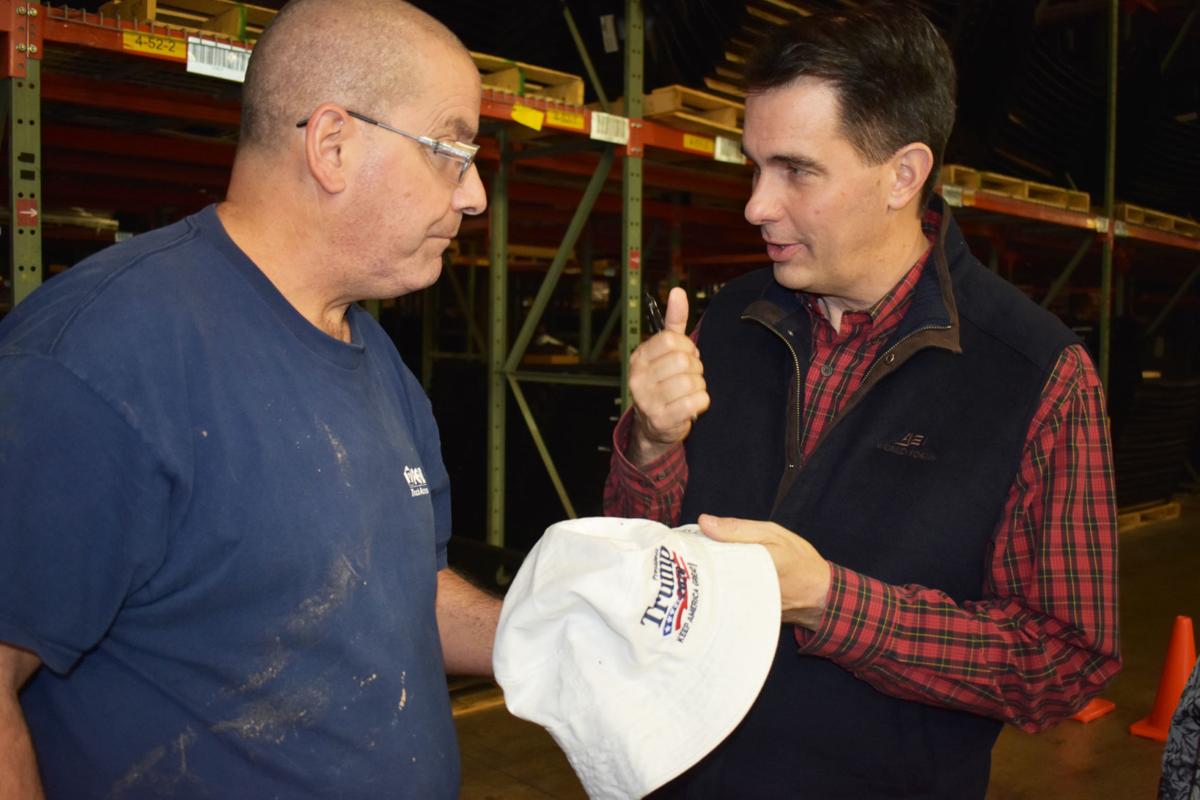 Gov. Scott Walker, right, grants a request from Penda employee Ron Siebert to autograph his cap at a recent campaign rally at Penda in Portage. Walker, a Republican, is seeking a third term as governor in the Nov. 6 election. 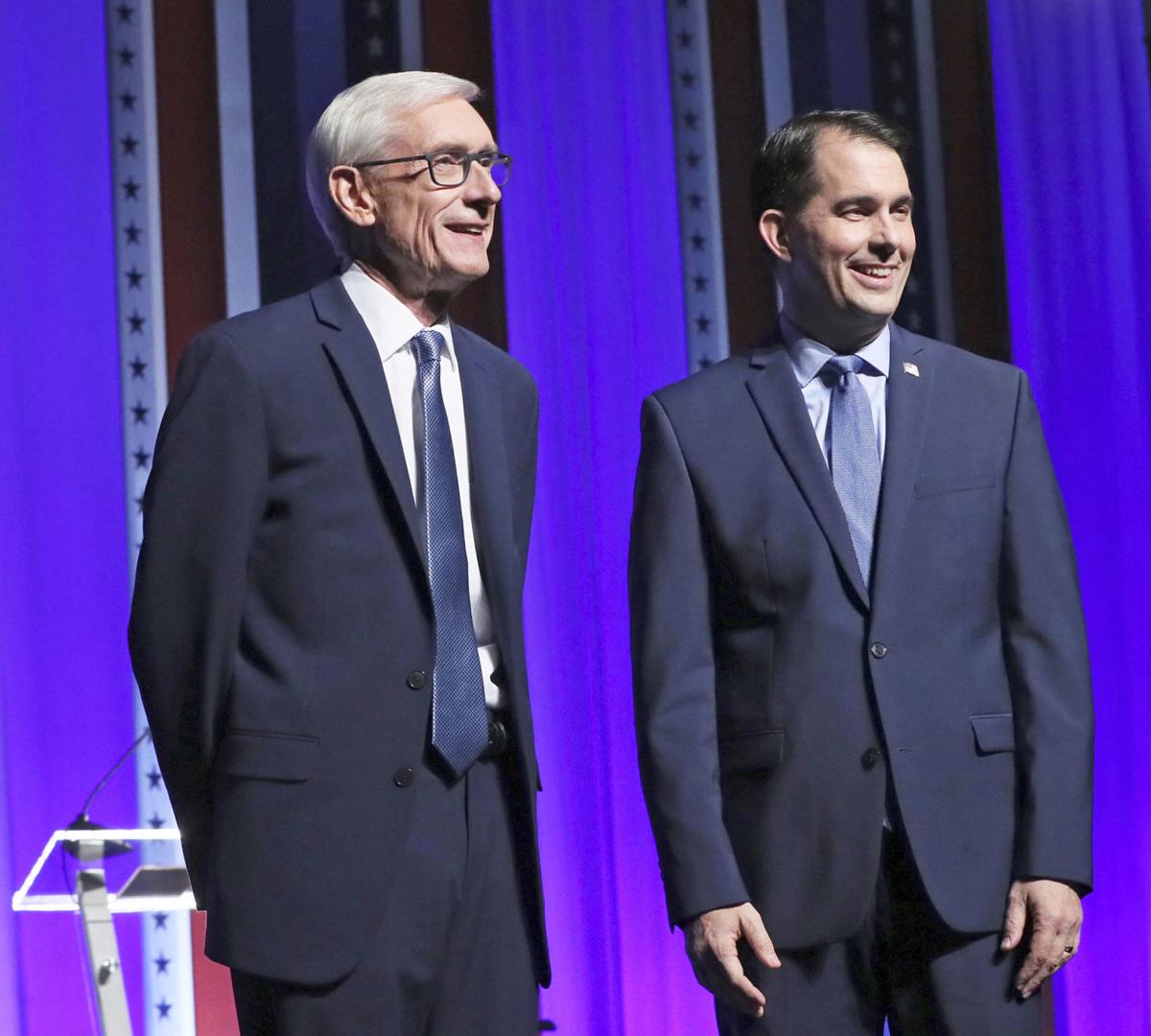 Gov. Scott Walker, right, and Democratic challenger Tony Evers are locked in a dead heat, with health care as a top issue.

Republican Gov. Scott Walker, locked in a tight re-election bid, said Thursday for the first time that he wants to enact the “exact same language” that’s in federal law at the state level guaranteeing insurance for people with pre-existing conditions.

However, the proposal would not protect as many people as the federal law does and it’s unclear whether there’s enough support in the Republican-controlled Legislature to pass it.

Walker previously supported a bill to guarantee coverage that was not as expansive as what is guaranteed under the federal Affordable Care Act. That bill stalled in the state Senate.

Walker’s new promise, made to reporters following a campaign stop in Waukesha as he faces the toughest election of his political career, was derided as a lie by Democratic challenger Tony Evers. A Marquette University Law School poll on Wednesday showed the race to be a dead heat, with health care as a top issue.

“No matter what happens in the courts or in the Congress, in Wisconsin we’ll codify that, the exact same language that’s in the Affordable Care Act. We’ll make sure everyone living with a pre-existing condition is covered here in the state,” Walker said.

Walker is a longtime opponent of the federal law and this year approved Wisconsin joining a federal lawsuit seeking its full repeal, including the popular protection for people with pre-existing conditions.

The Assembly passed the more limited bill earlier this year, but it died in the Senate. A spokesman for Republican Senate Majority Leader Scott Fitzgerald declined to comment Thursday, and he seesawed last month on whether the original proposal had the votes to pass. Assembly Speaker Robin Vos did not return a message.

Also, a state law like Walker is promising would not protect everyone.

If the federal law is overturned, people in Wisconsin who get their insurance through a self-funded employer plan would lose their protections because only the federal government can regulate those plans, the nonpartisan Legislative Council said in an Oct. 18 memo.

Evers said in a statement that “actions speak louder than words” and Walker’s long-held opposition to the federal law and its protections for people with pre-existing conditions shows he can’t be trusted.

“Politicians like Scott Walker are always talking out of both sides of their mouth and telling last-minute lies like this,” Evers said.

The fight played out as Walker, Evers and other candidates were blanketing the state, with surrogates including House Speaker Paul Ryan and White House counselor Kellyanne Conway in tow.

Republican U.S. Senate candidate Leah Vukmir was campaigning with Ryan and Walker on a bus tour from Waukesha to Green Bay. Vukmir had a separate stop with Conway in Appleton. She also won the endorsement of former Secretary of State Condoleezza Rice on Thursday.

Evers is on his own tour — in a yellow school bus — through western and northern Wisconsin starting in Tomah and ending in Ashland. Democratic U.S. Sen. Tammy Baldwin was campaigning in Marshfield and Mauston before ending in Madison where she urged college students to vote early, before casting her own ballot. She said it was the first time she’s ever voted early in an election where she was on the ballot.

Evers launched a new campaign ad Thursday emphasizing criticism of Walker from four of his former Cabinet secretaries. Three of them signed a letter urging a vote for Evers, while a fourth said Walker was not being truthful about his roads budget.

Walker, who is seeking a third term, has dismissed the criticism saying it shows he’s willing to surround himself with people who have differing viewpoints. The ad is Evers’ 14th of the campaign, while Walker has run a staggering 33 ads. Walker and Republicans have outspent Evers and Democrats roughly 2-to-1 on television.

Walker, in an interview with WTMJ radio in Milwaukee, acknowledged the closeness of the race and urged his supporters to vote and work to get others out.

“You can change the polls,” he said.

Outside spending in state campaigns soars past old record

Newly filed reports show Republicans and their allies at a big financial advantage heading into the campaign's final weeks.

Where do the candidates for governor, Congress, attorney general, the Legislature and other offices stand on a variety of issues? The Wisconsi…

The race is one of the most closely watched gubernatorial contests in the country.

Gov. Scott Walker, right, grants a request from Penda employee Ron Siebert to autograph his cap at a recent campaign rally at Penda in Portage. Walker, a Republican, is seeking a third term as governor in the Nov. 6 election.

Gov. Scott Walker, right, and Democratic challenger Tony Evers are locked in a dead heat, with health care as a top issue.