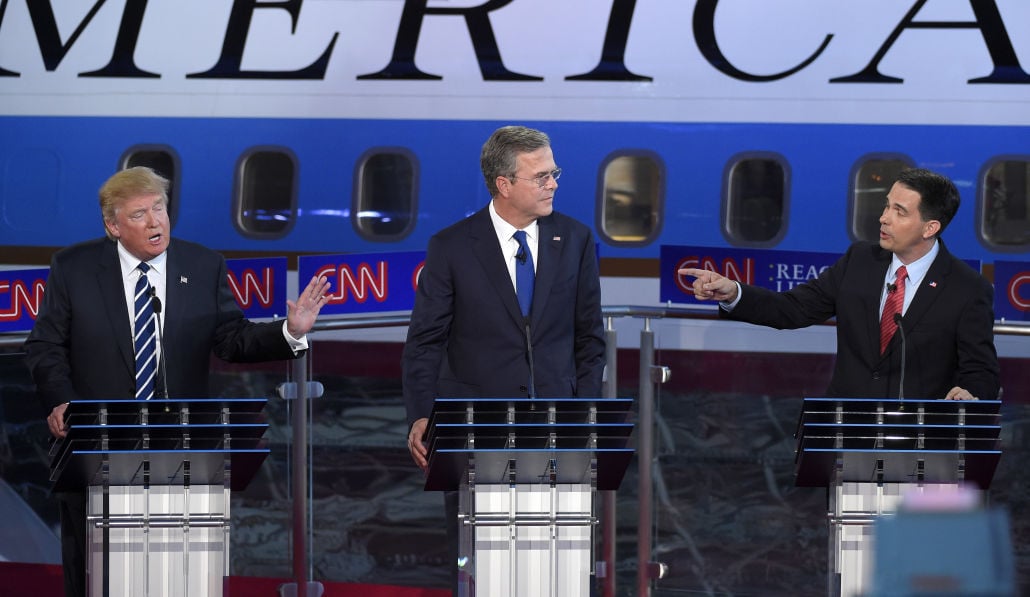 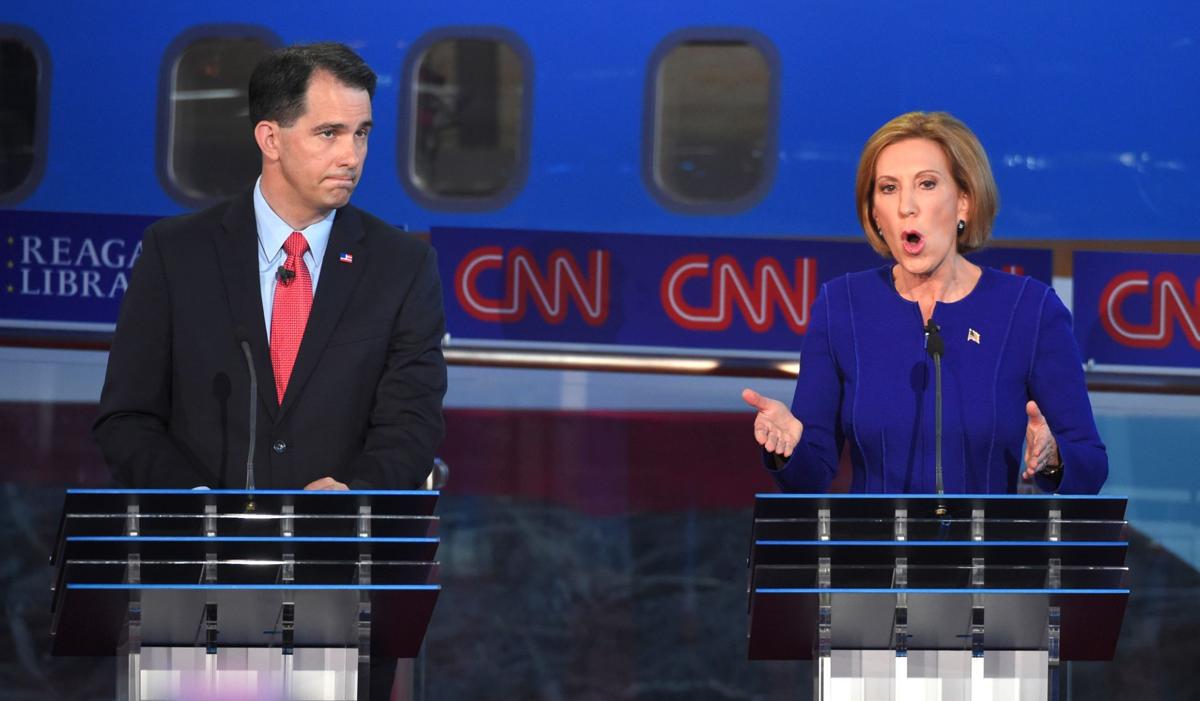 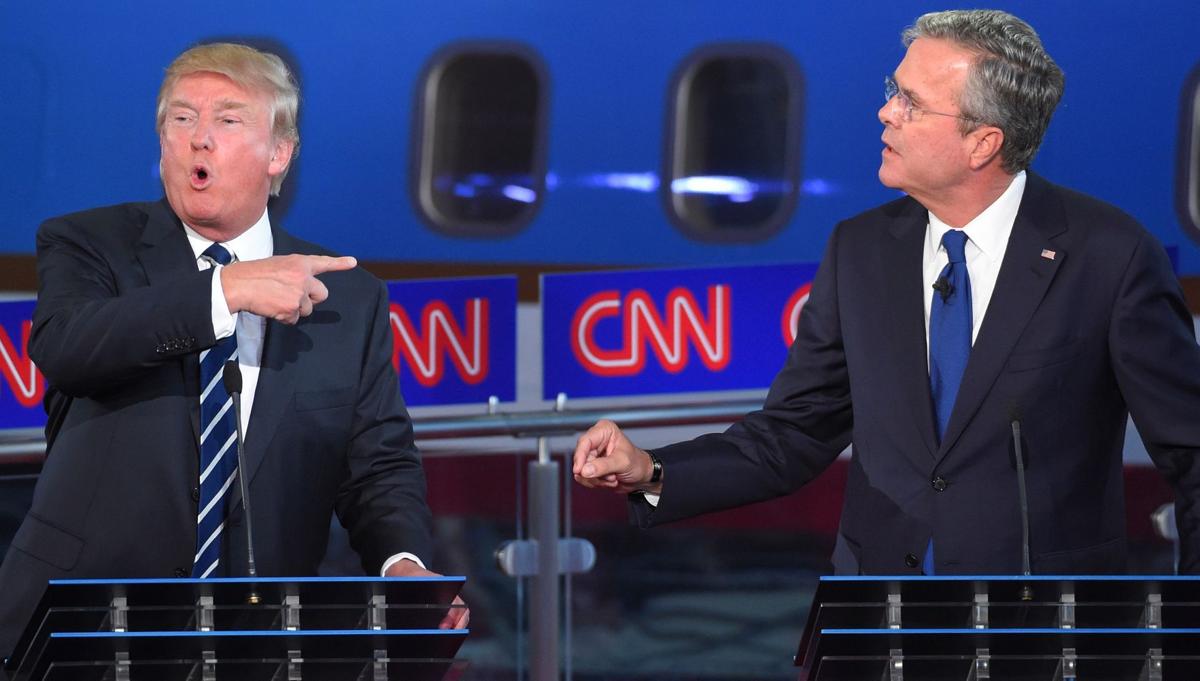 But some observers questioned if it was enough to give Walker what he needed from the debate: a jump-start for his flagging presidential bid.

Bruce Haynes, a national GOP political consultant not affiliated with a campaign, said Walker got off to a strong start by engaging Trump. But after that, Haynes said Walker disappeared for large swaths of the debate and looked uneasy at times.

“The debate is a microcosm of his campaign,” Haynes said. “He started with a bang, and then steadily faded from there. And left us all wanting something that we all wondered if it was ever really there.”

A National Public Radio analysis showed that Walker got the least amount of air time during the three-hour, 11-candidate debate — just eight minutes and 29 seconds. That mirrored his limited presence in the first debate, a steady but unimpressionable performance that marked Walker’s slide from the top of national and key early-contest polls to middle of the pack.

On Wednesday, Walker didn’t wait long in the debate to make his move. He and other candidates, including Carly Fiorina, Jeb Bush and Sen. Rand Paul, put a target on Trump’s back throughout the debate, which came as Trump has surged in recent polls of the Republican field.

For Walker, it was a sharp about-face in terms of his approach to Trump. Until now, Walker largely has refrained from going after Trump or other candidates, at times even seeming to mimic his tone and positions on issues such as immigration.

About 15 minutes into the three-hour debate, Walker broke into the discussion with a jab that referred to Trump’s former reality TV show, “The Apprentice,” while slamming President Barack Obama.

“Mr. Trump, we don’t need an apprentice in the White House. We have one right now,” Walker told Trump. “We don’t know who you are or what you’re doing.

“We need someone who can actually get the job done.”

Trump denied having gone bankrupt and shot back at Walker over his management of Wisconsin’s state budget, saying “in Wisconsin, you’re losing $2.2 billion right now.” Trump also contrasted his recent ascent in the presidential polls with Walker’s decline.

“When the folks of Iowa found out the true facts of the job you’ve done in Wisconsin, all of the sudden, he was No. 1, now he’s six or seventh in the polls,” Trump said of Walker.

Trump’s use of the “$2.2 billion” figure may refer to the difference between the amount requested in the 2015-17 budget by state agencies and the amount of revenue projected to be taken in by the state, as of late 2014. But Walker and GOP lawmakers in July voted to balance the state budget, leaving no deficit.

Trump has not filed for personal bankruptcy but has filed four business bankruptcies, all centered on casinos he used to own, according to a CNN Money report.

Walker, seeking to take the offensive, occasionally jumped into discussions between other candidates in the first half of the debate, held at the Ronald Reagan Presidential Library in Simi Valley, Calif.

Walker entered the fray by suggesting any sense of insecurity has been brought on by President Obama, not George W. Bush. He parlayed that into his one of his signature lines touting his willingness to stand up to protesters and those who sought to recall him from office:

He also touted his efforts as Wisconsin governor to restrict collective bargaining and defund Planned Parenthood.

The second debate retained the lively, unpredictable tone of the first GOP debate last month, due in part to Trump and other candidates’ prickly exchanges. At one point Wednesday, Walker and one of the debate’s moderators, CNN’s Jake Tapper, disagreed about whether Walker answered a question about his description of the federal minimum wage as “lame.”

Observers said the second debate was key for Walker to reverse the narrative that his campaign is in free-fall. Walker’s standing in national and early presidential state polls has plummeted since the first debate on Aug. 6, dropping him from the first tier of candidates to the bottom half of the top 10.

Walker told Fox News’ Sean Hannity Tuesday night that he would “show a little more passion” in the second debate after the lukewarm reaction to his showing in the first debate.

On Monday in Las Vegas, Walker unveiled a plan he hoped would be a springboard into the debate. It calls for eliminating federal employee unions and the National Labor Relations Board and a national “right to work” law — all of which would require congressional approval. The plan wasn’t a subject Wednesday night.

The national media ratcheted up the pressure on Walker in advance of the debate. Politico published a story calling it “Scott Walker’s last best chance,” and CNN asked: “Can Scott Walker salvage his campaign?”

The reports prompted a defensive response shortly before the debate from Walker’s campaign manager, Rick Wiley, who told The Hill they were “ridiculous.”

Craig Robinson, who writes the TheIowaRepublican.com blog, said Tuesday that Walker is among a group of Republican candidates, including Jeb Bush and Marco Rubio, for whom the second debate would be critical. Those three candidates have seen their poll numbers plummet in recent weeks while outsiders such as Trump and retired neurosurgeon Ben Carson have soared.

Speaking in the final minutes of Wednesday’s debate, Robinson said Walker didn’t do what he needed to do and would likely “be on a lot of people’s loser lists.” But Robinson added that Walker “wasn’t really given the opportunity to shine.”

“A lot of this is out of his control, which has to be frustrating,” Robinson said. “If we had a debate field of six to seven candidates, he would do much better.”

Scott Walker mixed it up with Donald Trump early in the second debate over Wisconsin's structural deficit.

The heat is on Scott Walker's presidential campaign after second debate

Gov. Scott Walker made his presence felt early in the second presidential debate but faded later on.

The Green Bay Packers surprise just about no one by beating the Chicago Bears in the season opener at Soldier Field. Madison city officials lo…

With Scott Walker back to work in Wisconsin, focus returns to what's next for state

A vacancy on the Supreme Court could be Walker's first major test as he seeks to re-establish his leadership role.

Amid the back-and-forth bickering over Donald Trump, the Republican presidential contest took a substantive and serious turn in Wednesday's pr…