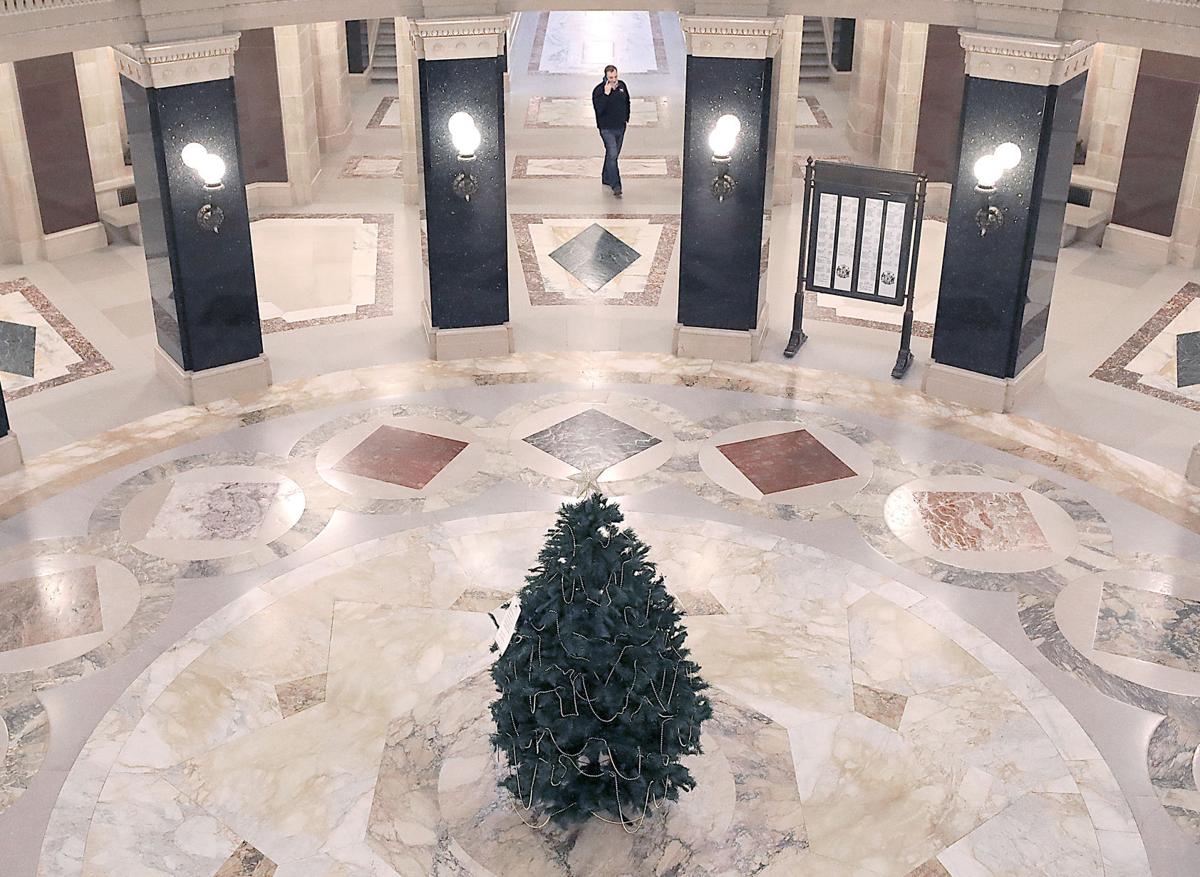 A small Christmas tree was placed in the rotunda of the state Capitol by Republican Reps. Paul Tittl and Shae Sortwell. The building is closed to the public. 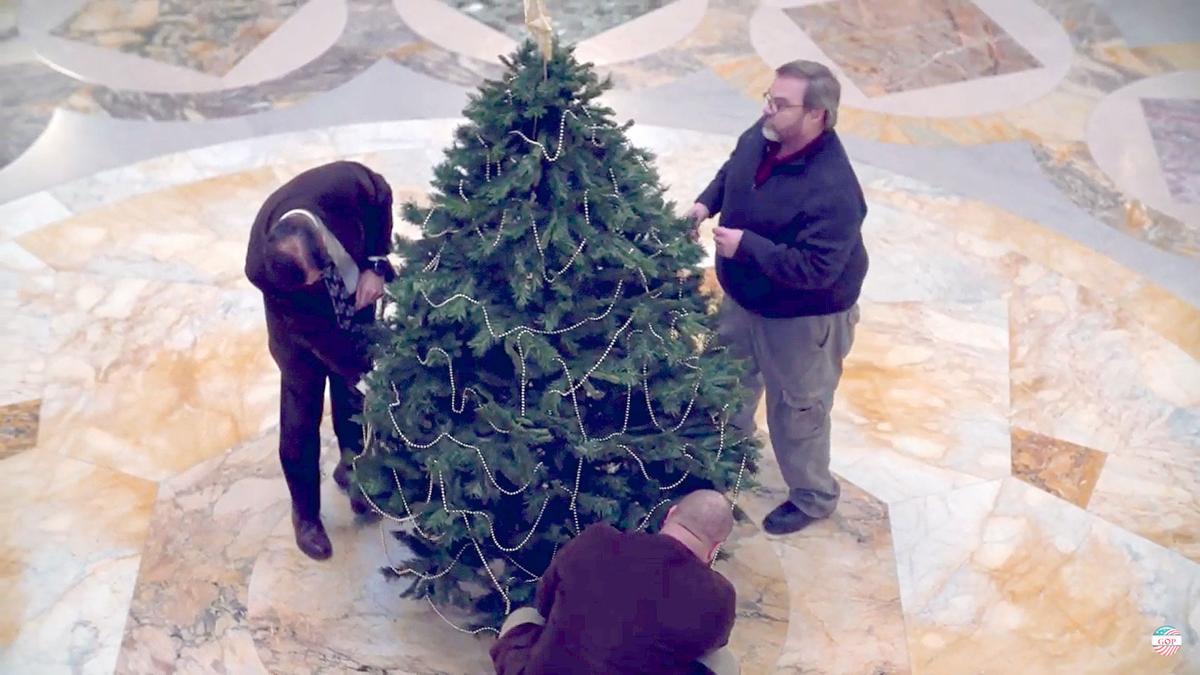 Two Republican lawmakers put up a Christmas tree in the Wisconsin Capitol rotunda despite being told they weren’t allowed to do so — a show of defiance after Democratic Gov. Tony Evers opted not to display a tree there this year because the building is closed to the public due to the COVID-19 coronavirus pandemic.

The Department of Administration has traditionally placed a towering evergreen decorated with ornaments constructed by school children in the rotunda every year. Evers, who controls the DOA, has refused to call the tree a Christmas tree, referring to it instead as a holiday tree, irking Republicans.

This year, Evers decided to forego a tree because the Capitol is closed to the public due to the coronavirus pandemic. That didn’t sit well with Republican Reps. Paul Tittl, of Manitowoc, and Shae Sortwell, of Two Rivers, who, like other lawmakers, are still working out of the building.

Records show the two lawmakers applied for a permit on Dec. 1 to place what they described only as a “historical display” in the rotunda from Dec. 1 through Jan. 6. The application did not specify that the display would be a Christmas tree.

Dan Blackdeer, chief of the Capitol Police, an extension of the DOA, denied the request the next day. He wrote that although the DOA can issue permits for events and exhibits, only the State Capitol and Executive Residence Board can approve decorative items.

He went on to say that state law prohibits the DOA from permitting any exhibits on the rotunda’s ground floor. And a permit request must be filed at least 72 hours in advance, while the lawmakers sought to display an exhibit the same day they submitted the application, Blackdeer said. Finally, he wrote, the DOA is denying all permit requests for the interior of Capitol because the building is closed to the public.

In an email to Tittl and Sortwell that night, DOA Assistant Deputy Secretary Olivia Hwang reiterated that the agency has denied all permit requests because the building is closed and said the lawmakers could still display a tree or other holiday decorations in their offices or any space in the building controlled by the Assembly.

The lawmakers put up a tree in the rotunda anyway on Dec. 1 before they received a decision on the permit request from DOA, Sortwell said. The 7-foot artificial decoration was still there on Monday, complete with signs that read, “The magic of Christmas is not in the presents but in His presence” and “This tree belongs to Representative Tittl and Representative Sortwell. Do not move without prior written approval from these Representatives.”

“The people of Wisconsin own the building, not the Department of Administration,” Sortwell said. “The tree has never needed a permit until now. … All (Evers) needs to do is let this stand as our choice.”

Reminded that people can’t see their tree because the building is closed, Sortwell said that they can watch a video of him and Tittl setting it up in the rotunda. They are joined on the video by Reps. Dave Murphy, R-Greenville, and Chuck Wichgers, R-Muskego, in decorating it. None of them is wearing a mask.

“When times are tough, it’s even more critically important that we hold onto the traditions we can hold onto,” he said.

Tittl didn’t immediately respond to messages. He said during the video that, “We really wanted to have a Christmas tree in the Capitol. The governor said ‘no,’ but we decided we were going to put one up anyhow.”

DOA spokeswoman Molly Vidal didn’t respond to an email asking whether the agency planned to remove the tree.

The move by Tittl and Sortwell is another example of the defiance that Republicans have shown Evers since he defeated GOP Gov. Scott Walker in 2018. Among other things, they passed legislation weakening Evers’ powers during a lame-duck session after he was elected but before he took office, and they persuaded the state Supreme Court to strike down his stay-at-home coronavirus order.

ART OF THE EVERYDAY: SEE THE WORLD THROUGH THE EYES OF THE STATE JOURNAL’S PHOTOGRAPHERS

Hands on Wisconsin: Capitol tree is trimmed with GOP accomplishments

After Gov. Tony Evers announced there would be no "holiday" tree in the Capitol this year (because the building is closed for the pandemic) a …

Congratulations to Reps. Paul Tittl, R-Manitowoc, and Shae Sortwell, R-Two Rivers. You have exemplified the worst of our Republican-run Legisl…

It’s appalling and disheartening to read of the antics state Reps. Paul Tittl, R-Manitowoc, and Shae Sortwell, R-Two Rivers, who installed a C…

To those who hold it dear, Christmas is something you hold in your heart. You recall the savior's birth story and all the gratitude and hope t…

Don't you just shake your head in disbelief at the petty, frivolous and irresponsible actions by state Reps. Paul Tittl, R-Manitowoc, and Shae…

Please stop covering the ridiculous and immature placement by Republicans of a Christmas tree in the Capitol rotunda.

Gov. Tony Evers: No Christmas tree in state Capitol this year due to COVID-19 pandemic

Instead he asked students to craft ornaments for veterans homes, hospitals and nursing homes with a theme of 'hope.'

Highs near 50 Wednesday and Thursday across southern Wisconsin could be followed by the first snow of December over the weekend, according to forecasters.

A pair of Republican lawmakers’ decision to put up a Christmas tree is reviving the debate over what forms of free speech are allowed in the state Capitol and how far leaders of either political party can go to limit them.

A small Christmas tree was placed in the rotunda of the state Capitol by Republican Reps. Paul Tittl and Shae Sortwell. The building is closed to the public. 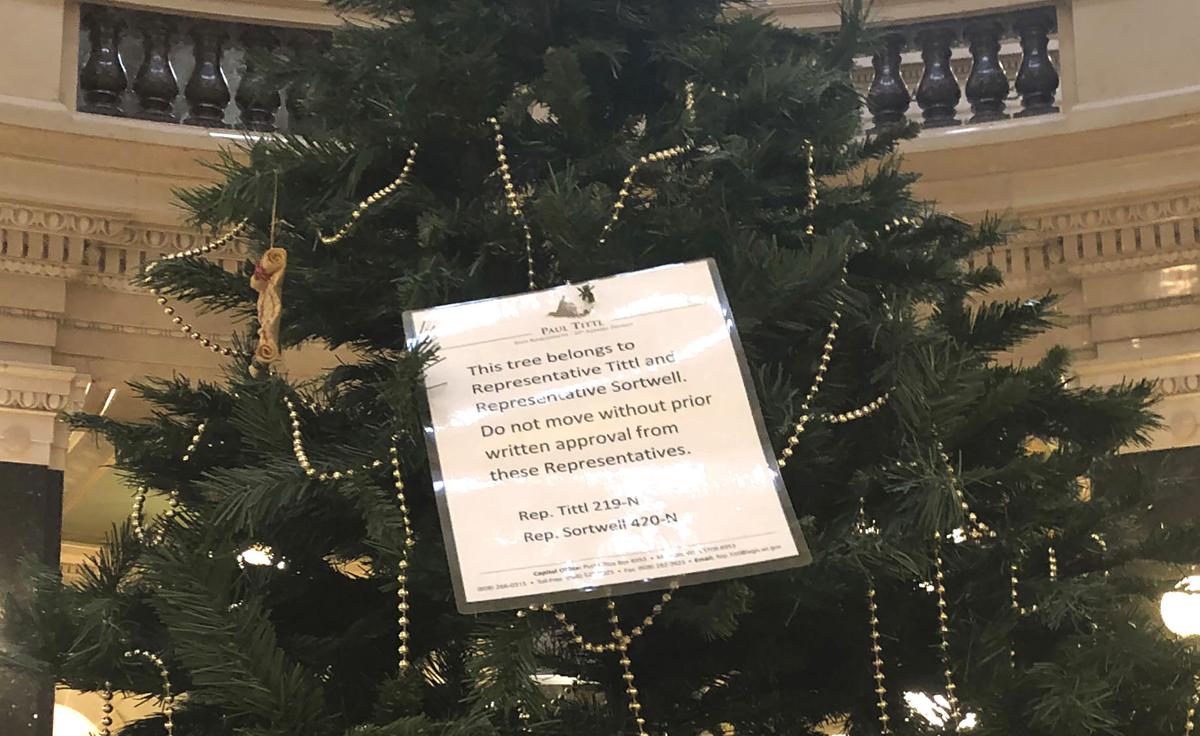 A sign on the tree cautions against removing it "without prior written approval" by the Republican lawmakers who put it up. 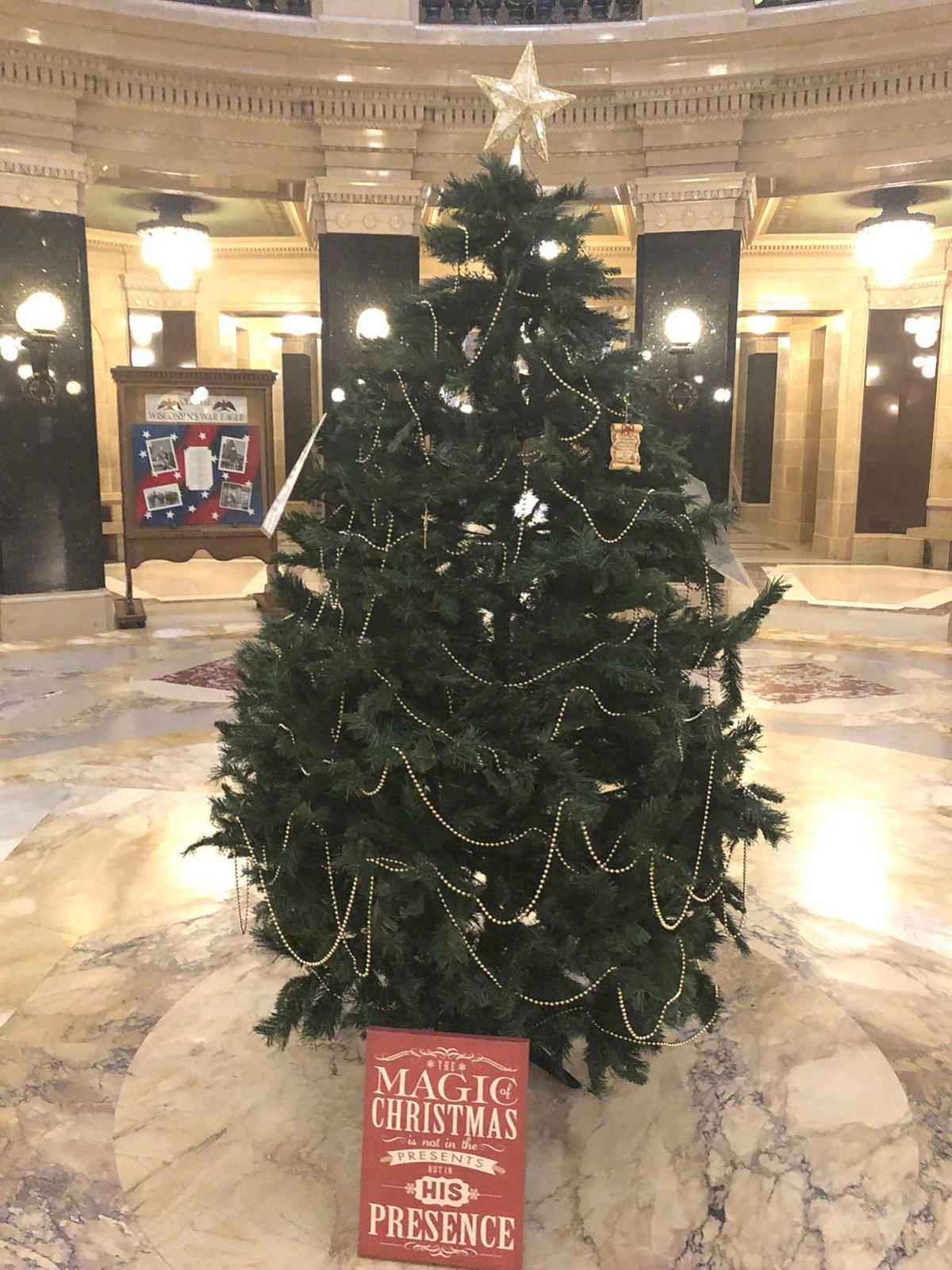 An artificial Christmas tree that Republican lawmakers set up stands in the Wisconsin Capitol rotunda.