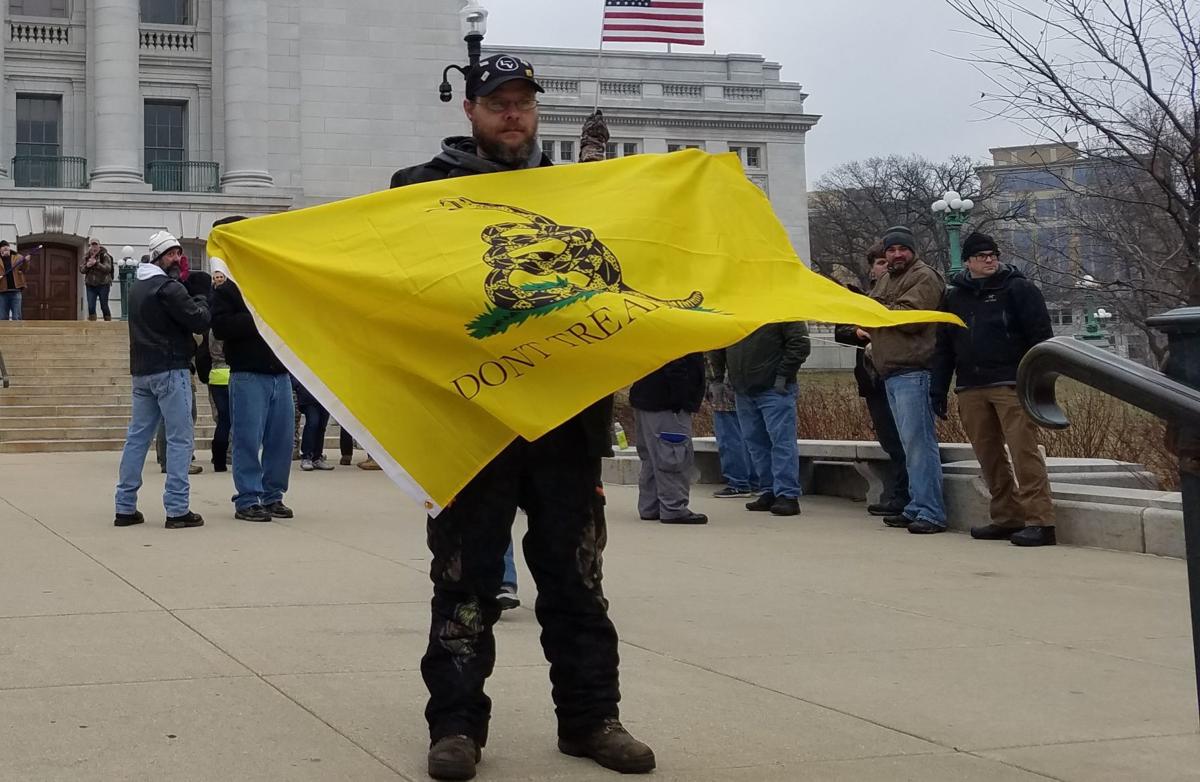 Chris Hinkley, of Waukesha, attends Saturday's We the People rally against gun control laws at the state Capitol with a "Don't tread on me" flag. The flag was designed in 1775 to support the American Revolution. 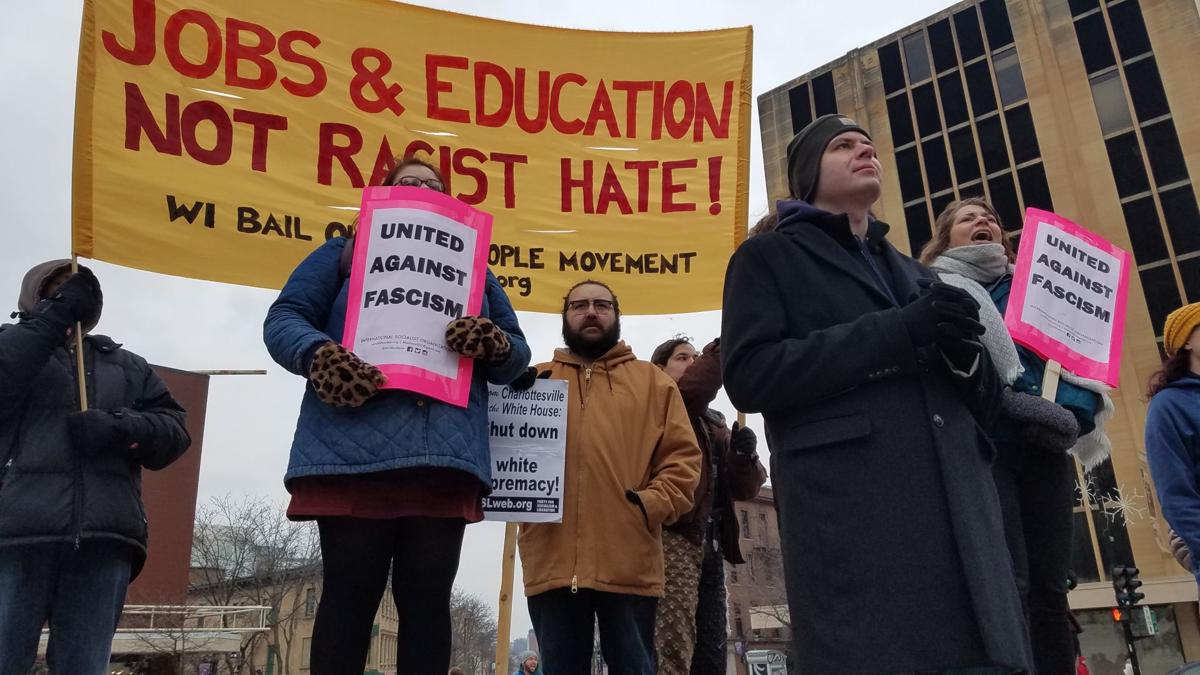 Counter-protesters tried to shout down gun rights demonstrators at Saturday's We the People rally with chants, instruments and whistles. 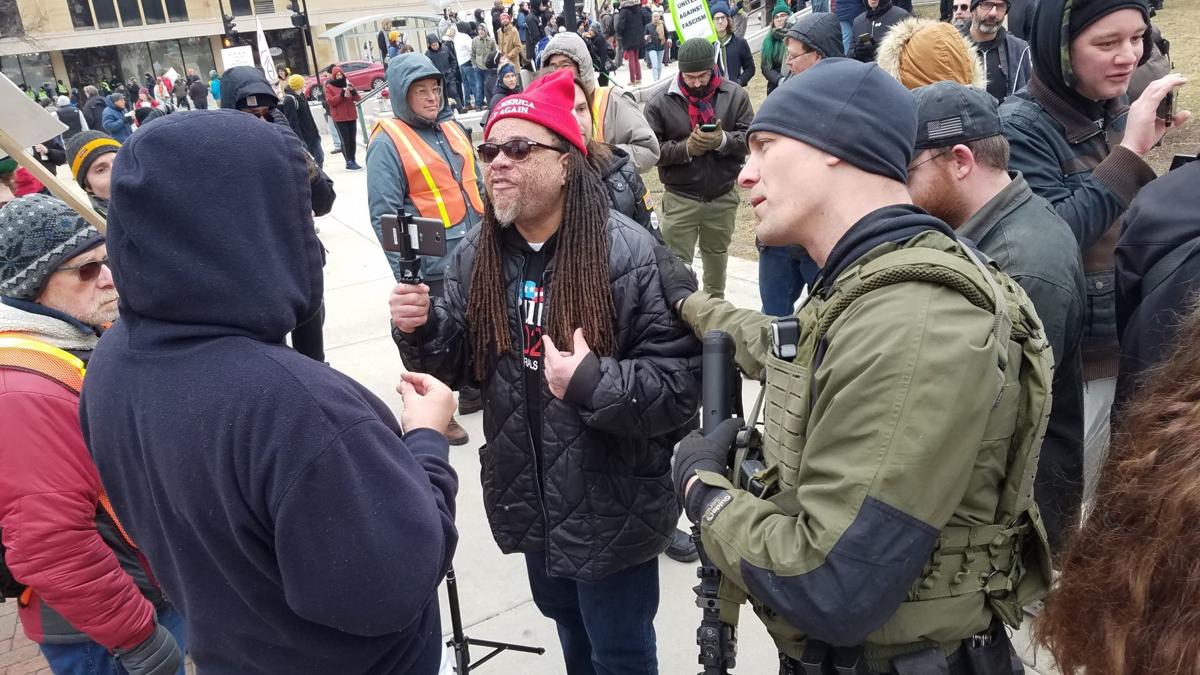 A few dozen people, some armed with rifles, handguns and extra ammunition, gathered outside the state Capitol Saturday to protest potential gun control measures they fear could come from either newly inaugurated Gov. Tony Evers and his administration or the federal government.

Attendees of the We the People rally spoke primarily of three amendments to the U.S. Constitution they believe are under threat: the Second Amendment, which guarantees the right to bear arms; the Fourth Amendment, which protects citizens against searches and seizures without due process of law; and the 14th Amendment, which awards all protections of the constitution to any person born or naturalized in the U.S.

“We have a right to our own things that we want to own as long as I’m not harming anyone,” Chris Hinkley, of Waukesha, said.

As the small group gathered at the top of the Capitol steps facing State Street, the rally was met with counter-protesters who met on the 100 block of State Street and advanced to the lower levels of the steps to shout down the We the People speakers.

Madison police spokesman Joel DeSpain said about 45 people attended the We the People rally and there were about 250 counter-protesters. No arrests were made, DeSpain said.

Counter-protesters repeated chants such as “Bigots go home” and “No Trump, no KKK, no racist USA,” and used the blaring drone of vuvuzelas — plastic horn instruments — as well as whistles to try to overpower the We the People speakers.

Steve Robinson, of Marquette County, who attended the We the People rally, said the counter-protesters were wrong to characterize the rally as racist.

“This is about our constitution,” Robinson said.

Many rally attendees were particularly opposed to so-called red-flag laws, which would allow officials to seize firearms owned by people who pose a threat to themselves or others.

Red-flag laws vary from state to state, but generally allow either law enforcement or judges to order those seizures.

Evers and Attorney General Josh Kaul, both Democrats, have called for the creation of a red-flag law in Wisconsin.

Assembly Speaker Robin Vos, a Republican, has said he is open to the idea of red-flag laws but is concerned the scope could be too broad.

Robinson said he is concerned that a red-flag law would violate due process rights. Although no language has been introduced this session, Robinson said he feared it would be too sweeping — allowing any law enforcement official to take away a person’s firearms based on claims rather than facts.

Organizer Josh Thieme said guns are an important part of self-defense — whether against another person with a gun or an oppressive government. Thieme said he is against both red-flag laws and bans on bump-stocks, which are unregulated rifle accessories that can effectively make semi-automatic weapons into machine guns.

“You take a piece of plastic that’s not a serialized piece of equipment, and you just made how many hundreds of thousands of people who have it felons if they don’t turn it in or destroy it. I think that’s tyrannical,” Thieme said. “It’s like me basically saying, ‘If you have a car that can go 150 miles per hour, you have to destroy it.’”

"It’s time to remake and repair our state and to reclaim our better history," Evers said.

The National Rifle Association has spent $5.5 million on Wisconsin elections since 1998, about 80 percent of that going to support Republican Gov. Scott Walker.

The We the People rally covered in last Sunday's State Journal story "Gun laws focus of Capitol protest" had merit. The "counter-protesters" a…

Women and men from around Wisconsin rallied Saturday at the state Capitol to call for equal rights for all people.

Chris Hinkley, of Waukesha, attends Saturday's We the People rally against gun control laws at the state Capitol with a "Don't tread on me" flag. The flag was designed in 1775 to support the American Revolution.

Counter-protesters tried to shout down gun rights demonstrators at Saturday's We the People rally with chants, instruments and whistles.